ABSTRACT: The present study was conducted to evaluate the hepatoprotective activity of ethyl acetate extract of stem bark of Crataeva magna (CM) in CCl4 induced toxicity in Wistar albino rats. Stem bark of CM were collected, and subjected to continuous hot extraction in a Soxhlet apparatus, for 72 h with solvents like chloroform, ethyl acetate and distilled water separately. Liver damage was induced in rats by administering CCl4 subcutaneously (s. c.) in the lower abdomen in a suspension of liquid paraffin (LP) in the ratio 1: 2 v/v at the dose of 1 ml CCl4/kg b. wt. of each animal. CCl4 was administered twice a week, on every first and fourth day of all 14 days. The extract at the dose of 200 mg/kg and 400 mg/kg b. wt. was evaluated by inducing hepatotoxicity with CCl4 and using silymarin (100 mg/kg) as the reference standard. Biochemical parameters like, SGOT, SGPT, SALP and serum bilirubin level were analysed. A section of liver was subjected to histopathological studies. Based on the above studies, it is reported that the ethyl acetate extract of Crataeva magna possess significant hepatoprotection against CCl4 induced hepatotoxicity in albino rats.

INTRODUCTION:A number of medicinal plants are used in traditional system of medicine for the management of liver disorders. However many of them have not investigated for their described effects.

Crataeva magna bunch ham, belonging to the family Capparidaceae, is one such medicinal plant used in the treatment of liver disorders in folk medicine. It also has anticancer, antimicrobial, antiinflammatory, antimalarial, antidiabetic activities, etc.

This has triggered the authors and the present study was conducted to evaluate the hepatoprotective activity of ethyl acetate extract of Crataeva magna against liver disorders induced by CCl4 in Wistar albino rats.

The present study scientifically validated the traditional use of Crataeva magna for liver disorders.

Plant material: Crataeva magna was collected in the month of Sep 2012 and authenticated by Dr. A. K. Pradeep, Herbarium Curator, Department of Botany, Calicut University, Malappuram, Kerala, and a voucher specimen was deposited in the Department (Specimen No: 107895).

Plant extract preparation: Stem bark of the plant was air-dried, protected from direct sunlight, and then powdered. The powdered plant material (500 g) was extracted with chloroform, ethyl acetate and distilled water separately, in a Soxhlet apparatus, for 72 h, by continuous hot extraction method1. The each extracts were then concentrated under reduced pressure on a rotary evaporator to dryness to give the crude residue 2.

Animals: Albino mice of Swiss strain and albino rats of Wistar strain were used for toxicological studies and pharmacological studies respectively. These animals were obtained from the animal house of Central Animal Facility, IISC, Bangalore, India. Female mice selected were nulliparus and non-pregnant. Female mice weighing 25 to 30 g and rats of either sex weighing 125 to 150 g were used for the study. Each animal, at the commencement of its dosing, was between 8 and 12 weeks old and their weight variation was within ± 20% of the mean weight of any previously dosed animals.

The temperature in the experimental animal room was 22ºC (± 3ºC) and the relative humidity was between 50-60%. These animals were fed with pellet diet and drinking water ad libitum. They were kept in 12 h/12 h light/dark cycle. The animal experimental protocol has been approved by OACE of U win life science, Malappuram, where the animal studies were carried out (OACE No: ULSB/DAEC/KER/61/363/13).

Hepatoprotective activity: Albino rats of Wistar strain weighing 125-150 g of either sex were used for the study. They were housed in polypropylene cages with not more than six animals per cage and maintained under standard conditions. All the experiments were performed in the morning according to current guidelines for the care of the laboratory animals and the ethical guidelines for the investigation of experimental pain in conscious animals.

Liver damage was induced in rats by administering CCl4 subcutaneously (s. c.) in the lower abdomen in a suspension of liquid paraffin (LP) in the ratio 1: 2 v/v at the dose of 1 ml CCl4/kg b. wt. of each animal. CCl4 was administered twice a week, on every first and fourth day of all 14 days 4.

Thirty rats were divided into five groups of six animals each. Group I served as control and received oral administration of normal saline at the dose of 1 ml/kg b. wt., once a day for 14 day 5. Group II received s. c. administration of CCl4 at 100 mg/kg b. wt, twice a week for 14 days 6. Group III were the silymarin treated group, and received the same at a p. o. dose of 100 mg/kg b. wt. along with CCl4 7. Group IV and V were treated with extract at 200 mg/kg and 400 mg/kg b. wt. respectively along with CCl4.

Upon completion of 14 days, blood samples were collected by making an incision on jugular vein in heparinized microfuge tubes. The blood samples thus collected were immediately centrifuged at 2200 rpm for 15 min. When serum clearly separated out, the serum was analyzed for serum glutamate oxaloacetic transminase (SGOT) 8, serum glutamate pyruvate transaminase (SGPT) 9, serum alkaline phosphatase (SALP), and total bilirubin levels. The results thus obtained were subjected to statistical analysis using student t-test and analysis of variance. The livers were dissected out immediately, washed with ice cold saline, and fixed in 10 % formalin immediately to avoid decomposition. Embedding in paraffin wax was carried out by removal of water using alcohol from 30-100% and then stained with hemotoxylin, which has an aqueous base. The sections were dehydrated using increasing concentration of alcohol and then stained with eosin. They were treated with diphenyl xylene (DPX) and examined under the microscope 10.

Statistical analysis: Experimental results were grouped according to the treatment, and the arithmetic average was calculated for each group from the values for each individual with that group.  This average was expressed as the mean ± the standard error of the mean (SEM) for six determinations. Experimental data were analyzed statistically by one-way analysis of variance (ANOVA). Tukey’s multiple comparison tests was used to determine significant differences between means. The p value corresponding to the test statistic value was reported to denote the degree of significance. PRISM Instat software was used for statistical analysis.

RESULTS AND DISCUSSION: The present studies were performed to assess the hepatoprotective activity in rats against CCl4 as hepatotoxin to prove its claims in folklore practice against liver disorders. CCl4 induced hepatic injury is commonly used as an experimental method for the study of hepatoprotective effects of medicinal plants extracts and drugs. The extent of hepatic damage is assessed by the level of various biochemical parameters in circulation and histological evaluation.

It is well known that carbon tetrachloride is converted by cytochrome P450 mixed function oxygenases in smooth endoplasmic reticulum of liver into toxic metabolite, mainly trichloromethyl radical (CCl3). This free radical in the presence of oxygen may cause peroxidation of lipids on target cell resulting in extensive damage to liver11.

Destruction of hemoglobin yields bilirubin which is conjugated in the liver to diglucoroxide and excreted in the bile. Bilirubin accumulates in plasma when liver insufficiency exists or biliary obstruction is present or rate of hemolysis increases. The serum bilirubin level increased from 1.051 ± 0.301 mg/dL in the control group to 2.77 ± 0.515 mg/dL after CCl4 intoxication as shown in Table 1. Administration of extract at the dose of 200 mg/kg and 400 mg/kg in CCl4 intoxicated rats reduced the serum bilirubin to 2.111 ± 0.248 mg/dL and 1.320 ± 0.125 mg/dL (P<0.001).

In this study, CCl4 administration to rats leads to a marked elevation in the levels of serum enzymes like SGOT, SGPT, SALP and serum bilirubin level. This might be due to release of these enzymes from the cytoplasm, into the blood stream rapidly after rupture of the plasma membrane and cellular damage 12.

Treatments with extract at the dose of 400 mg/kg significantly reduced the levels of these marker enzymes in CCl4 treated rats. This implies that the extract tends to prevent liver damage, suppresses the leakage of enzymes through cellular membranes, preserves the integrity of the plasma membranes and hence restores these enzymes levels.

This is in agreement with the commonly accepted view that serum levels of transaminases return to normal with the healing of hepatic parenchyma and the regeneration of hepatocytes13.Effective control of SALP and bilirubin, points towards an early improvement in the secretary mechanism of the hepatic cells. Decrease in serum bilirubin after treatment with the extract in liver damage indicated the effectiveness of the extract in normal functional status of the liver.

The protective effect exhibited by extract at dose level of 400 mg/kg was comparable with the standard drug silymarin. In Fig 1, the histological examination of the liver sections reveals that the normal liver architecture was disturbed by hepatotoxin intoxication. In the liver sections of the rats treated with extracts and intoxicated with CCl4, the normal cellular architecture was retained significantly when compared to silymarin, thereby confirming the protective effect of the extract. In accordance with these results, it may be hypothesized that tannin, saponins, and flavonoids, which are present in extracts, could be considered responsible for the hepatoprotective activity.

Values are the mean ± SEM of six animals each. 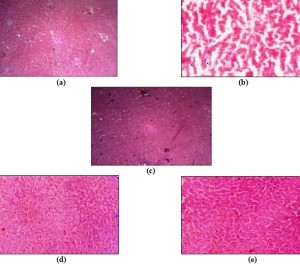 (a)     Rats treated with normal saline 1 ml/kg b. wt. Normal structure of hepatic lobules is seen; white spots indicate the presence of vacuoles, a prominent blood vein with normal appearance.

(b)     Rats intoxicated with CCl4 1 ml/kg b. wt. Massive fatty changes are seen; necrosis, ballooning degeneration and broad infiltration of the lymphocytes are seen.

CONCLUSION: Based on the results obtained, it may be concluded that the ethyl acetate extract of Crataeva magna stem bark is non-toxic and is safe. As the results indicated, the extract possesses significant hepatoprotective activity. A study of effect of extract on immunological parameters, like TNF-alpha, interleukin, etc is required to be conducted. Also, a thorough study of clinical trials is required to be performed. After carrying out these studies, the plant may be considered as a low cost, potent, herbal medicine for liver disorders.

ACKNOWLEGEMENT: The authors are thankful to the Manager, Devaki Amma Memorial College of Pharmacy, Chelembra, for providing the facilities to carry out the work.