ABSTRACT:  Leaves and bark preparations of Ficus dalhousiae Miq (Moraceae) are used in folklore and Siddha system of medicine for liver and skin ailments. So the intent of the present study was to evaluate the Hepatoprotective effect of Ficus dalhousiae Miq leaves ethanolic extract (FDLEE) by means of Carbon tetrachloride and Paracetamol induced hepatotoxicity model in Albino rats. Administration of carbon tetrachloride suspended in liquid paraffin 1ml/kg body weight i.p, and Paracetamol in distilled water (2 gm/kg) body weight; p.o. to albino Wistar rats resulted in hepatotoxicity. Biochemical parameters [Alkaline Transaminase (ALT/SGPT), Aspartate Transaminase (AST/SGOT), alkaline phosphatase (ALP), Total Bilirubin (TB), Direct Bilirubin (DB), Albumin (ALB), Total Protein (TP)] and liver weight were measured to determine the degree of protection at the end of duration of treatment in both the models. CCl4 and Paracetamol markedly elevated the levels of SGPT, SGOT, ALP, TB and DB. Treatment with the standard drug Silymarin (25mg/kg) reversed all the parameters and restored them to the optimum levels. The test extract FDLEE produced a significant and dose dependent decrease in the levels of SGPT, SGOT, ALP, TB, and DB. The parameters Total Protein, at 100mg/kg and 200mg/kg showed less activity (P<0.05) where as at 400 mg/kg shows more activity (P<0.01). The histopathological results also conveyed the occurrence of toxicity to the control group and its reversal in FDEE and standard drug treated groups. In conclusion it can be stated that Ficus dalhousiae Miq extract show a significant reversal of hepatotoxic parameters. The probable mechanism could be the stimulation of hepatic regeneration through an improved synthesis of proteins.

INTRODUCTION: Herbal medicines have recently attracted much attention as alternative medicine useful for treatment and prevention of life-style related disorder 1. However, relatively very little knowledge is available about their mode of action and safety.

The earliest recorded use of herbal remedies comes from Hippocrates, who advocated use of simple plants, such as garlic, neem 2. The liver is a vital organ present in vertebrates and in some other animals.

It is involved in several vital functions such as metabolism, secretion and storage. Further detoxification of a variety of drugs and xenobiotics occurs in the liver itself. The bile secreted by the liver has an important role in digestion. Liver diseases are among the most serious disorders. Liver diseases pose a serious worldwide health anomaly; Inadequacy in treatment of liver diseases using conventional or synthetic drugs may lead to untoward effects 3. In the absence of a reliable liver protective drug in modern medicine there are a number of medicinal preparations in Ayurveda recommended for the treatment of liver disorders 4.

In view of severe undesirable side effects of synthetic agents, there has been a growing interest in the analysis of plant products which has stimulated intense research on their potential health benefits. There is growing focus to follow systemic research methodology and to evaluate scientific basis for the traditional herbal medicines that are claimed to possess Hepatoprotective activity. Since no pharmacological evaluation on Hepatoprotective effect has been done previously on the Ficus dalhousiae, the present study was intended to evaluate its Hepatoprotective effect in Albino rats.

Collection and Authentication of the plant material:

Leaves of Ficus dalhousiae commonly known as Somavalkhom (Sanskrit), Kallaal (Tamil), Dalhousiae’s Ficus (English) 5, the plant was checked for data in www.plantlist.org with the following statement (This name is accepted name of a species in th genus Ficus (family Moraceae). The record derives from WCSP (in review) which reports it as an accepted name with original publication details: Ann. Mus. Bot. Lugduno-Batavi 3:285 1867. The plant parts like fruit is used in heart diseases while liver and bark are used in liver complaints and skin diseases 5, 6. It was collected from Tirupati A.P, during the month of December 2012. The authentication of plant material was done by Department of Botany, Osmania University, Hyderabad -500 007, India. The plant was given Voucher number 0949.

Healthy Wistar Albino Rats weighing about (120-160gm) of either sex were obtained from animal house. The animals were maintain under standard condition i.e., housed in polypropylene cages and maintained at a temperature 27 ±  20 C, relative humidity 65 ± 10% under 12 hour light and dark cycle. The animals were acclimatized for 10 days under laboratory condition before carrying out the experiments. The animals house approved by the Committee for the Purpose of Control and Supervision on Experimental Animals (CPCSEA)-Registration number – 1534/PO/A/11/CPCSEA. The study was carried out after the approval by the institutional animal ethical committee (IACE), Anwar-ul-Uloom College of Pharmacy 7.

All the chemicals were Analytical grade. CCl4 and Paracetamol were obtained from drug store Anwarul Uloom College of Pharmacy.

Method of Preparation of Extract:

The collected leaves were washed thoroughly under running water, cut into smaller pieces and air dried for eight days. Then the dried leaves were coarsely powdered using grinder and were continuous extracted in a soxhlet apparatus at 300C with 2500 ml ethanol. The extract was filtered through a fine muslin cloth and evaporated under reduced pressure by the rotary evaporator. The obtained extracts were stored in amber colored glass bottle for further processing 8.

The solution of the methanolic extract was prepared using distilled water and subjected to preliminary phytochemical screening. Test for common phytochemicals were carried out by standard methods described in practical pharmacognosy by Kokate, Khandelwal and Trease and Evans 9-11. 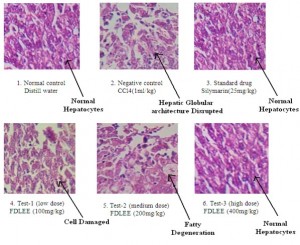 The phytochemical screening of ethanolic extract of Ficus dalhousiae leaves showed the presence of Alkaloids, Tannins, Saponins, Flavonoids and Sterols. Tests were negative for Glycosides, Anthraquinones, and Reducing Sugars.

Treatment with hepatotoxicants CCl4 markedly showed elevated levels of SGPT, SGOT, ALP, TB and DB while the normal readings were recorded in the control group. Treatment with the standard drugs Silymarin (25mg/kg) positively affected all the parameters and restored them to the optimum levels as displayed in the (Table 3). The test extract FDLEE (100mg/kg) significantly decrease the levels of SGPT, SGOT, ALP, TB, DB (with P<0.05). Further a dose dependant decreased in the levels afore said parameters FDLEE at a dose of 200 mg/kg also increased ALB and T/P (with P<0.01 and P<0.05 respectively was observed). The parameters T/P, at 100mg/kg and 200mg/kg showed less activity (P<0.05) where as at 400 mg/kg shows more activity (P<0.01). The effect of FDLEE 400mg/kg on serum albumin was more profound than the standard. Lastly FDLEE very significantly affected all the parameters and the results were closer to that of standard.

TABLE: 3 EFFECT OF FDLEE ON BIOCHEMICAL AND MORPHOLOGICAL PARAMETER IN CCl4 INDUCED HEPATOTOXICITY

Liver weight and liver volume were increased on comparison of normal group to hepatotoxic group. The intoxication induced changes were attenuated by FDLEE at all doses (Table 4). However there was decrease in wet liver volume at FDLEE 100mg/kg but the result found statistically not significant. A significant reversal in the liver weight was observed when treated with Silymarin and FDLEE 400 mg/kg.

The vehicle treated group showed no signs of damage to liver while the hepatotoxic control group showed increased level of degeneration and necrosis to liver cells (Figure 2). Treatment with Silymarin and FDLEE extracts revealed reduced damage to the hepatic cells, the necrosis was reversed and it also resembled a normal liver architecture with no pathological manifestations. 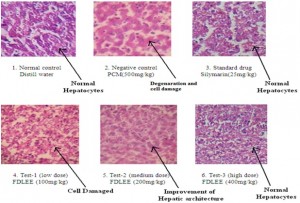 TABLE 4: EFFECT OF FDLEE ON BIOCHEMICAL AND MORPHOLOGICAL PARAMETER IN PARACETAMOL INDUCED HEPATOTOXICITY

Hepatic system of an organism performs various functions one of which includes metabolism. During the process of metabolism the hepatic system undergoes rigorous challenges, therefore it has to protect itself from the exposure to xenobiotics/antibiotics and chemicals. Despite the ultra modern advances in medical science, pharmaco-therapeutics treatment with synthetic drugs is not yet realized. However there are several herbs and herbal formulation which are found to be claimed for treating hepatic disorders.

In the present study one of the local available plant Ficus dalhousiae Miq was selected. Liver damage induced by CCl4 and Paracetamol are commonly used models for the screening of Hepatoprotective drugs. The rise in the levels of SGPT, SGOT, ALP, and Bilirubin (Direct & total) where as decrease in the levels of ALB and T/P has been attributed to the damaged structural integrity of liver.

Liver cell injury induced by CCl4 involved initially the metabolism of CCl4 to trichlromethyl free radical by the mixed function oxidase system of the endoplasmic reticulum. Formation of toxic products due to CCl4 metabolism or due to peroxidative degeneration of membrane lipids could be postulated as the secondary mechanism of CCl4 toxicity. These biochemical markers are

cytoplasmic in location and are released in circulation after the cellular damage. Both CCl4 and Paracetamol share a common property to be converted into their respective reactive metabolites N-acetyl-p-benzoquinoneimine (NAPQI) and halogenated free radical (HRF) by hepatic cytochrome P450.

Investigation on various biochemical parameters clearly demonstrated the changes produced in the serum of rats by intoxication with CCl4 and Paracetamol which were significantly reversed by the treatment of extract at different doses and were supported by the histopathological report.

The probable mechanism by which Ficus dalhousiae Miq exerts its protective action against CCl4 and Paracetamol induced hepatotoxicities could be the stimulation of hepatic regeneration through an improved synthesis of proteins, or with interference with the liberation of microsomal activation to toxicants. It can also be postulated that the inhibitor cytochrome P450 (CYPs) can impair the bioactivation of Paracetamol and CCl4 into their respective reactive metabolites and thus provide protection against the hepatocellular damage. The extract may stimulate the inhibitor cytochrome P450 (CYPs) and thereby providing the protection against the hepatotoxicants. Moreover it is reported that flavonoids and tannins were reported to possess variety of pharmacological activity including Hepatoprotective activity.

In the present investigation also preliminary phytochemical investigation on FDLEE gave positive tests for flavonoids and tannins this could be the reason for significant Hepatoprotective property of the test extract.

CONCLUSION: The Phytochemical screening results indicated the presence of Alkaloids, Tannins, Saponins, Flavonoids and Sterols. The acute toxicity studies for FDLEE were carried out and no gross evidence of abnormalities or mortality were found in the rats even at a maximum tolerated dose level of 2000 mg/kg body weight; p.o.

The results obtained in the present study indicate that Ficus dalhousiae Miq has shown a good Hepatoprotective activity by decreasing significantly the levels of dose dependent serum SGPT, SGOT, ALP, TB, DB and increasing the levels of ALB and T/P. There was decrease in the liver weight. Histopathology of liver also supported the protective effects of Ficus dalhousiae Miq. Presence of Tannins and Flavonoids may be attributed to the Hepatoprotective activity of Ficus dalhousiae Miq. Further, studies can be conducted in order to determine the exact mechanism of action. Hence, based on the results obtained a conclusion can be made that, orally applicable Ficus dalhousiae Miq may have great potential as an alternative to the therapeutic agents currently available for treatment of hepatotoxicity.

ACKNOWLEDGEMENT: First and foremost, I take this opportunity to express my sincere thanks to my guide Mr. Syed Safiullah Ghori, M. Pharmacy, (Ph.D.), Asst. Professor, Department of Pharmacology, Anwarul Uloom College of Pharmacy and Mrs. Sumia Fatima, M.pharmacy, (Ph.D.), Asst. Professor, Department of Pharmacology, Shadan College of Pharmacy, for their guidance and support to make this project a success and helping me complete the project. It was a great experience to work under their inspiring guidance.

It would not have been possible to carry out this research endeavor without the encouragement, sacrifice, support, assistance and prayers of my commendable Parents. I would like to mention special thanks and gratitude to my brother Mohammed Asif and my Friends who have taught me to be determined and hold my moral high and are a persistent source of inspiration and courage.