ABSTRACT:The present study was designed to screen and evaluate the hepatoprotective and antioxidant activity of ethanol extracts of leaf and bark of Naringi crenulata (Roxb) Nicolson (NCL, NCB) against CCl4 induced hepatotoxicity in rats.  Liver functions were assessed by the activities of liver marker enzymes, SGOT, SGPT, ALP, total protein, albumin, globulin, total, conjugated and unconjugated bilirubins.  It also exhibited antioxidant activity by showing the increased activity of SOD, CAT, GPx and GRD and decreased in TBARS compared to CCl4 treated groups. Silymarin, a known hepatoprotective drug is used for comparison.  The plant extracts were effective in protecting liver against injury induced by CCl4 in rats.

INTRODUCTION: Liver is one of the largest chief organs in the human body regulating many important metabolic functions 1. It is involved with almost all the biochemical pathways to growth, fight against disease, nutrient supply, energy provision and reproduction 2, 3, 4 and thus, it is an important target of toxicity to xenobiotics, oxidative stress, ethanol and toxic chemicals. The toxins absorbed from the intestinal tract go first to the liver resulting in a variety of liver ailments 5. Hepatitis and cirrhosis are the two diseases that can badly damage the liver.

Hepatitis is an inflammation of liver caused by certain viruses. Cirrhosis changes the structure of the liver and hence it fails to function properly leading to retention of toxins in the blood.  Therefore, damage to the liver inflicted by hepatotoxic agents is of great concern 6.  Drug induced liver toxicity is a common cause of liver injury 7. Carbon tetrachloride consistently causes liver toxicity, resulting in fatty degeneration, cellular necrosis, fibrosis and cirrhosis 8. Natural remedies from medicinal plants are considered to be effective and safe alternative treatment for hepatotoxicity due to their inherent distinct physical and chemical properties, leading to diverse pharmacological properties. Naringi crenulata (Roxb) Nicolson (Fam-Rutaceae), a tree with green foliage, grows abundantly in different parts of India. The therapeutic effect of the fruits, leaves and roots of this plant in the treatment of different tropical diseases is well documented in the folk medicine 9.

However, no systematic attempts have been made to establish scientific basis of beneficial effects of Naringi crenulata leaves and bark extracts. Realising its medicinal properties, the present study aims to investigate the hepatoprotective activity of ethanol extracts of Naringi crenulata on carbon tetrachloride (CCl4) induced liver toxicity in rats.

Preparation of plant extracts for Hepatoprotective studies: The leaf and bark of Naringi crenulata were cut into small pieces, washed, shade dried at room temperature and the dried plant materials were powdered in a Wiley mill. The powdered leaf and bark were separately packed in soxhlet apparatus and extracted with ethanol. The ethanol extracts were concentrated in a rotary evaporator. The concentrated ethanol extracts were used for hepatoprotective activity.

Acute Toxicity Studies: Acute oral toxicity study was performed as per OECD-423 guidelines (acute toxic class method) albino rats (n=6) of either sex selected by random sampling were used for acute toxicity study 10. The animals were kept fasting for overnight and provided only with water, after which the extracts were administered orally at 5mg/kg body weight by gastric intubations and observed for 14 days. If mortality was observed in two out of three animals, then the dose administered was assigned as toxic dose.  If mortality was observed in one animal, then the same dose was repeated again to confirm the toxic dose. If mortality was not observed, the procedure was repeated for higher doses such as 50, 100 and 2000 mg /kg body weight.

Hepatoprotective activity of the extracts against CCl4 toxicity: In the investigation, the animals were divided into seven groups each consisting of 5 rats.

Biochemical Analysis: The animals were sacrificed at the end of experimental period of 7 days by decapitation. Blood was collected, separated by centrifugation at 3000g for 10 minutes. Serum protein 11 and serum albumins were determined quantitatively by colorimetric method using bromocresol green. The total protein minus albumin gives the globulin. Serum glutamate oxaloacetate transaminase (SGOT) and serum glutamate pyruvate transaminase (SGPT) were measured spectrophotometrically by using the method of Reitman and Frankel 12. Serum alkaline phosphatase (ALP) was measured by the method of King and Armstrong 13.

Statistical Analysis: The results were expressed as mean ± SEM.  The difference among the means has been analysed by one way ANOVA p<0.05 and p<0.01 were considered as statistical significance using SPSS software.

RESULTS: In the present study, the ethanol extracts of leaf and bark of Naringi crenulata did not show any sign and symptoms of toxicity and mortality upto 2000mg/kg dose. The effect of ethanol extracts on serum total protein, albumin, globulin, A/G ratio, serum transaminases, alkaline phosphatases in CCl4 intoxicated rats are summarized in Table 1. There was significant (p<0.01) increase in serum GOT (AST), GPT (ALT) and ALP levels in CCl4 intoxicated group (Group II), compared to the normal control group (Group I).  The total protein and albumin were significantly (p<0.01 and p<0.05) decreased to 6.04 g/dl and 3.56 g/dl in CCl4 intoxicated rats from the levels of 8.51 g/dl and 4.68 g/dl respectively in normal group.  Ethanol extracts of NCL and NCB at the dose of 250mg/kg and 500mg/kg orally, significantly decreased the elevated serum marker enzymes and reversed the altered total protein and albumin to almost normal level.

TABLE 1: EFFECT OF ETHANOL EXTRACTS OF NCL AND NCB ON THE PROTEIN, ALBUMIN, GLOBULIN CONCENTRATION AND ENZYME ACTIVITY OF SERUM GOT, GPT AND ALP IN THE NORMAL, LIVER INJURED AND DRUG TREATED RATS

TABLE 2: EFFECT OF ETHANOL EXTRACTS OF NCL AND NCB ON THE SERUM TOTAL, CONJUGATED AND UNCONJUGATED BILIRUBIN LEVELS IN THE NORMAL, LIVER INJURED AND DRUG TREATED RATS

Oxidative Stress Markers in Liver Tissue: The levels of TBARS as an index of lipid peroxidation, a degradative process of membranous lipids, in liver tissue of CCl4 treated rats were significantly (p<0.05) elevated when compared to control animals. Lipid peroxidation level was restored towards their normal value by treatment with ethanol extracts of NCL and NCB; indicate prevention of accumulation of lipid peroxidation.

In the present study, glutathione peroxidase, superoxide dismutase and catalase activity were significantly (p<0.01) depleted. Similarly, there is significant (p<0.05) decrease in the level of glutathione reductase in CCl4 intoxicated rats when compared with those of the animals in control group. Rats treated with ethanol extracts of NCL and NCB at the doses 250 mg/kg and 500 mg/kg significantly decreased the elevated lipid peroxidation levels and restored the altered glutathione peroxidase, glutathione reductase, superoxide dismutase and catalase levels towards the normal levels in a dose dependent manner. The results were well comparable with standard drug (Silymarin) treated group.

DISCUSSION: CCl4 is one of the most common hepatotoxin, produces an experimental damage that histologically resembles viral hepatitis. Toxicity begins with the metabolism of CCl4, via reductive dehalogenation by cytochrome P450, primarily CYP2E1 metabolites. The following are the key events in hepatotoxicity of CCl4, even leading to cancer 8.

(i)           The primary metabolites trichloromethyl and trichloromethylperoxy free radicals are highly reactive and are capable of covalently binding locally to cellular macromolecules, with preference for fatty acids from membrane phospholipids.

(iii)       Lipid peroxidation is known to cause membrane disruption, resulting in the loss of membrane integrity and leakage of microsomal enzymes.

(iv)        By-products of lipid peroxidation include reactive aldehydes that can form protein and DNA adducts and may contribute to hepatotoxicity and carcinogenicity respectively.

(vii)      High calcium levels in the cytosol activate calcium- dependent proteases and phospholipases that further increase the breakdown of the membranes. Similarly, the increase in intracellular calcium can activate endonucleases that can cause chromosomal damage and also contribute to cell death.

(viii)    Sustained regenerative and proliferative changes in the liver in response to hepatotoxicity. The increase in cell division coinciding with the increase in frequency of genetic damage can overwhelm DNA repair mechanisms, resulting in an increase in mutagenic frequency and cancer.

The proposed primary mode of action for carbon tetrachloride is shown in Figure 1. 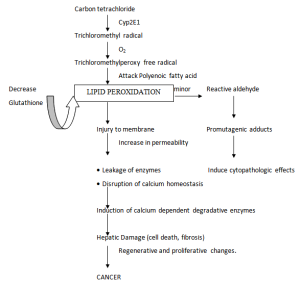 In the present study, there is significant hepatic damage in CCl4 intoxicated rats as shown by the increase in the levels of serum markers AST, ALT and ALP and bilirubin level has been attributed to the damage structural integrity of liver, because they are cytoplasmic in location and released into circulation after cellular damages indicating development of hepatotoxicity 22.

Administration of rats with ethanol extracts of NCL and NCB significantly restored towards their normal value. The normalization of serum markers by ethanol extracts of NCL and NCB suggests that they are able to condition the hepatocytes so as to protect the membrane integrity against CCl4 induced leakage of marker enzymes into the circulation. The above changes can be considered as an expression of the functional improvement of hepatocytes.

Alkaline phosphatase, a hydrolase enzyme responsible for removing phosphate groups from many types of molecules, including nucleotides, proteins and alkaloids. The alkaline phosphatase is the prototype of these enzymes that reflects the pathological alteration in biliary flow 23. Total bilirubin, a by-product of the breakdown of red blood cells in the liver, bilirubin is a good indicator of liver function.

High levels will cause (icterus) jaundice and are indicative of damage to the liver and bile duct 24. The ethanol extracts of NCL and NCB induced suppression of the increased ALP activity with the concurrent depletion of raised bilirubins suggests the possibility of the extract to have ability to stabilize biliary dysfunction in rat liver during hepatic injury by CCl4.

The reduction of the bilirubins levels by the NCL and NCB extracts also suggest that, the extracts may activate the constitutive androstane receptor (CAR) which is a key regulator in bilirubin clearance in liver 25. The administration of CCl4 alone may adversely interfere with protein metabolism probably by inhibiting the synthesis of proteins. Administration of ethanol extracts of NCL and NCB significantly reversed these changes by increasing the protein synthesis, thus indicating the protective effect over liver and improvement in the functional efficiency.

Lipid peroxidation has been postulated to the destructive process of liver injury due to CCl4 administration. In the present study, the increase in TBARS (MDA) level in liver induced by CCl4 suggests enhanced lipid peroxidation leading to tissue damage and failure of antioxidant defense mechanism to prevent formation of excessive free radicals. A massive decrease in lipid peroxidation in liver tissue of plant extracts treated groups indicates that Naringi crenulata possess antioxidant properties.

In the present investigations, CCl4 intoxicated rats decreased the content of GPX and GRD in liver, whereas treatment with ethanol extracts of NCL and NCB able to reverse such effects. Superoxide dismutase (SOD) is a key defense enzyme and catalyses the dismutation of superoxide anions. Catalyse (CAT) is a haemoprotein that catalyses the reduction of H2O2.  It converts harmful hydrogen peroxide into water and oxygen and protects the tissues from highly reactive hydroxyl radicals 26.

The reduction in the activity of this enzyme may results in number of deleterious effect due to accumulation of highly toxic, metabolites and H2O2 on CCl4 administration, which can induce oxidative stress in cells. Administration of ethanol extracts of NCL and NCB, increases the activities of catalase in animals to prevent the accumulation of excessive free radical and protects the liver from CCl4 intoxication. Decrease in SOD activity can result in the removal of superoxide anions that may inactivate SOD thereby cause an inactivation of H2O2 scavenging enzymes. Administration of ethanol extracts of NCL and NCB prevent effectively the decrease in SOD and CAT activities, which may be directly correlated to scavenging or neutralizing of radicals.  The plant extracts of NCL and NCB have greatest ability to reduce oxidative stress by increasing glutathione level and preventing lipid peroxidation.

From our results, it can be concluded that decrease levels of SOD, CAT, GPx, GRD, total protein and albumin and increased serum markers SGOT, SGPT, ALP and lipid peroxidation level in CCl4 treated rats was due to hepatocellular damage.  Extracts of leaf and bark of Naringi crenulata afforded protection from hepatotoxicity. Both NCL and NCB plant extracts contain antioxidants and hepatoprotective activity through regulatory action on cellular permeability, stability and suppressing oxidative stress.