ABSTRACT: Introduction: Pongamia pinnata is commonly known as karanja. In Ayurvedic and Unani system of medicine, it has been used as anti-inflammatory, antiplasmodial, anti-nociceptive, anti-hyperglycaemic, anti-lipid oxidative, anti-diarrheal, anti-ulcer, anti-hyperammonemic, antioxidant, etc. Moreover, it has been used traditionally in the treatment of liver disorders. However, there are no scientific bases or reports in the modern literature regarding its usefulness as a hepatoprotective agent. Aim: To evaluate the hepatoprotective activity of the Pongamia pinnata bark extracts. Methods: The extracts were subjected to preliminary phyto-chemical investigation. The in-vivo hepatoprotective activity of both the ethanolic and aqueous extracts was assessed using paracetamol-induced liver damage in albino rats. The efficacy of protection was measured by evaluation of biochemical parameters, such as SGOT (serum glutamate oxalate transaminase), SGPT (serum glutamate pyruvate transaminase), ALP (alkaline phosphatase) and total bilirubin levels, as well as in-vivo estimation of GSH (glutathione) from liver tissue. Results: Phytochemical studies revealed the presence of phenolics and flavonoids, which were further estimated quantitatively. A significant hepatoprotective effect of both the extracts was observed against hepatic damage induced by paracetamol. The results also demonstrated that the activity of SGPT, SGOT, ALP, and total bilirubin was reduced in extract treated rats as compared to intoxicated rats. Conclusions: The hepatoprotective property of the bark extracts might be due to the presence of phenolics and flavonoids.

At a higher dose, it causes hepatic necrosis. The reason behind paracetamol-induced hepatotoxicity is the generation of oxidative stress by its metabolite NAPQI (N-acetyl-p-benoquinamine), formed through cytochrome P450 pathway in liver 1.

Pongamia pinnata is commonly known as karanja. Various parts of the plant have been used as a crude drug for the treatment of skin diseases, tumors, piles, itches, rheumatic joints wounds, diarrhea, ulcers etc. 2.

In Ayurvedic and Unani system of medicine, it has been used as anti-inflammatory, antiplasmodial, anti-nociceptive, anti-hyper-glycaemic, anti-lipid oxidative, anti-diarrheal, anti-ulcer, anti-hyper-ammonemic, antioxidant, etc. 3 Pongamia pinnata has been reported to be rich in phenolics 4 and flavonoids 5. Polyphenolics are strong natural antioxidants 6. Moreover, it has been used traditionally in the treatment of liver disorders. However, there are no scientific reports in modern literature regarding its hepatoprotective activity. Thus, the present study was conducted to evaluate the hepatoprotective activity of the Pongamia pinnata bark.

Procurement of Plant Extracts: The ethanolic and aqueous extract of Pongamia pinnata bark was procured from Unico Pharmaceuticals, Ludhiana under the batch no. HC/PG/001/11 and HC/PG/S/ 001/11, respectively.

Procurement of Animals: Male albino rats (220-250 gm) were procured from NIPER, Mohali. The animals were fed regularly with diet and water ad libitum. The protocol was approved by the Institutional Animals Ethics Committee (954/ac/06/CPCSEA/ 11/1).

Preliminary Phytochemical Screening of Plant Extracts: The ethanolic and aqueous extracts of Pongamia pinnata bark were screened for the presence of various phytoconstituents such as phenols, flavonoids, tannins, saponins, carbohydrates, alkaloids, resins, etc. 7, 8

Estimation of Total Phenolic and Total Flavonoid content: The total phenolic content was determined by Folin-Ciocalteu method using tannic acid as an internal standard and was expressed as tannic acid equivalents in milligrams per gram of sample 9, 10. The flavonoid content was determined by the method of Huo et al., 11 using quercetin dehydrate as internal standard and was expressed as micrograms of quercetin equivalent per mg of sample.

Biochemical Parameters (Liver Function Test): The blood samples were collected by retro-orbital bleeding, centrifuged at 6000 g for 10 min, and serum was separated. The serum was further used for the analysis of biochemical markers SGPT, SGOT, ALP, total bilirubin levels 12.

GSH Level: The liver sample was homogenized in 10 ml of cold phosphate buffer and centrifuged at 3000 gyrations for 15 min. The GSH level in liver tissue was evaluated using the method of Naskar et al. 13 Briefly, the reaction mixture contained 0.1 ml of supernatant, 2.0 ml of 0.3 M phosphate buffer (pH-8.4), 0.4 ml of double distilled water, 0.5 ml of 50% w/v of TCA (trichloroacetic acid) and 0.5 ml of DTNB {dithiobis-(2-nitrobenzoic acid)}. The reaction mixture was incubated for 10 min. and the absorbance was measured at 412 nm.

Preliminary Phytochemical Screening of Plant Extracts: The phytochemical investigation of both the extracts revealed the presence of various bioactive phytoconstituents such as alkaloids, saponins, phytosterols, resins, phenols, and flavonoids.

However, pretreatment with silymarin reduced the liver weight to be close to that of the normal. Similarly, ethanolic and aqueous extracts of P. pinnata bark also produce a significant reduction in liver weight when compared to the positive control group.

Biochemical Parameters (Liver Function Test): A significant elevation in the level of liver biomarkers enzymes was observed in the blood serum of rats treated with paracetamol alone as compared to the normal rats Table 2. Pretreatment with silymarin, ethanolic, and aqueous extracts of the plant significantly reduced the elevated levels of liver biomarker enzymes in the serum of animals and thus reversed the hepatic damage.

DISCUSSION: The present work explored the ability of ethanolic extracts of Pongamia pinnata bark to exhibit protection against hepatotoxicity induced by paracetamol (an over the counter drug). The liver is a major metabolic organ affected by various chemicals and toxins and liver injuries induced by various hepatotoxins has been recognized as a major toxicological problem for years 14.

Paracetamol is one of the most common drugs used for the treatment of minor to moderate pain in humans. At 300 mg/kg or higher dose, paracetamol leads to severe acute liver necrosis. Firstly, it gets metabolized in the liver to non-reactive metabolites by sulphation and glucuronidation reactions. Further, these primary metabolites get converted into NAPQI, which is known to be hepatotoxic Fig. 1. 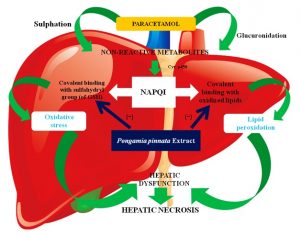 It covalently binds to oxidized lipids and sulphydryl groups in the liver tissue, leading to severe damage of cell membrane 15. That is why; paracetamol-induced liver damage is a commonly used the experimental model to evaluate the potency of hepatoprotective agents.

Silymarin is a polyphenolic antioxidant component obtained from Silybum marianum. It is used traditionally as an immunostimulant, hepato-protectant, and dietary supplement. Silymarin also has chemopreventive and antineoplastic agent 16. Its hepatoprotective activity is due to the presence of flavonolignans principal 17. It possesses strong free radical scavenging activity, inhibits lipid peroxidation, and promotes regeneration of damaged hepatocytes. Also, silymarin inhibits the 5-lipoxygenase pathway and also possesses membrane stabilizing properties. All these factors together contribute to its hepatoprotective activity 18.

One of the important morphological parameters which represent liver intoxication is the change in liver weight of the rats. As shown in the results, paracetamol significantly increases the liver weight of rats. This increase may be due to the accumulation of lipids. The silymarin, as well as both the extracts, inhibited the increase in liver weight, showing their protective effect against liver damage. The liver injury caused by paracetamol overdose leads to the alteration in the transport function of hepatocytes. As a result of which leakage of cellular membrane takes place and the serum enzyme levels are increased 19. Hence, the biochemical estimation of liver enzymes in the blood of animals is used routinely for the determination of hepatic damage, e.g. SGPT, SGOT, ALP, total bilirubin, etc.

In this context, a sharp increase in the liver enzymes, in positive control animals, represents paracetamol-induced liver damage. Pretreatment of animals with ethanolic and aqueous extracts resulted in a significant reduction of paracetamol-induced liver marker enzymes in serum, almost comparable to the silymarin. One of the most important intracellular antioxidant enzymes which maintain the cellular proteins and lipids in their functional state is GSH 20. At lower concentration, NAPQI is detoxiﬁed in the liver by GSH to form paracetamol–GSH conjugate 21.

As the concentration of NAPQI increases, GSH, being depleted, can no longer prevent hepatic proteins from getting oxidized by NAPQI 12. The GSH levels were found to get depleted in the positive control group as compared to the normal control, which is due to the consumption of enzymes during detoxification of reactive oxygen metabolite, i.e. NAPQI. Treatment with Silymarin, ETPP800, AQPP400, and AQPP800 significantly elevated the GSH levels.

CONCLUSION: It may be concluded that the hepatoprotective effect of Pongamia pinnata aqueous and ethanolic extract is because of prevention of the depletion in the tissue GSH levels. Upon literature review, it was found that the bark of Pongamia pinnata contains flavonoid and phenolic contents in both the extracts. Therefore, there is a possibility that bark extracts may possess antioxidant property, which may be involved in the hepatoprotective activity. Furthermore, it is necessary to carry-out further studies to rule out if treatment with both the extracts can inhibit oxidation of paracetamol to highly reactive NAPQI.

There is also a need for further isolation of the components present in the plant extracts which are responsible for the hepatoprotective effect to explore the molecular mechanism by which these maintains the integrity of the liver.