ABSTRACT: The plant selected for the activity is obtained from the ninth day young leaves of Triticum aestivum Linn. belonging to the family Poaceae. The plant is commonly known as Wheatgrass which is used for various medicinal and health benefits for many years. It is considered as a cleansing and purifying agent from ancient times and yet can be used for its healing properties because of its nutritional values. The leaves contain many chemical compositions such as proteins, flavonoids, alkaloids, glycosides, terpenoids, saponins, fibers, tannins, and phenolic compounds. Wheatgrass is also rich in chlorophyll which consists of Chlorophyllin (derivatives of chlorophyll) and posses bacteriostatic and antioxidant properties. The concentrated methanolic extract showed significant hepatoprotective effect at 500 mg/kg dose in carbon tetrachloride (CCl4) treated rats. The blood samples were collected, and the serum was estimated for biochemical parameters SGOT, SGPT, alkaline phosphatase, total and direct bilirubin content. The studies indicated that the recovery of liver from CCl4 damage after the treatment was significant.

INTRODUCTION: In today’s fast and furious life, peoples lifestyle and food habits are changing drastically, due to which ninety percent of the population suffers from oxidative stress resulting as ageing process, arthritis, ischemia, neurodegeneration and chronic liver diseases. Cereal grass has been found curative from various ailments from thousands of years. Human consumption of wheatgrass and other cereal grasses has increased dramatically in the last ten years, but most people have no idea of what cereal grass really is.

Many of those who have heard of wheatgrass or barley grass are puzzled about their purpose in the diet. Nowadays many people view with suspicion anything labeled with the word grass as a commodity for human consumption. Young cereal plants were valued in ancient times; bottled, dehydrated cereal grass has been a popular food supplement for people in the United States since the early 1930s.

The literature review revealed that commonly grown wheatgrass could be used for different ailments. It helps in preventing cancer 1, tooth decay, skin problems such as eczema and psoriasis. It is also claimed to reduce hair from graying, improves digestion, reduces high blood pressure as it enhances the capillaries, support the growth of lactobacilli 2 and can remove heavy metals from the body 3, 4, 5.

A DNA based cellular assay used for measurement of specific biological activity in wheatgrass extract was also performed 11. Hypolipidemic effect of fresh Triticum Aestivum grass juice in hypercholesterolemic rats was reported 12. All these activities suggest that Triticum Aestivum grass is a potential grass for treating various diseased conditions and present investigation can commence determining hepatoprotective potential of Triticum aestivum grass.

Procurement and Authentication of the Plant Material: The Wheatgrass seeds for the research were purchased from Breeder Seed Production Unit Field crops, Department of Plant Breeding and Genetics, Jawahar Lal Nehru Krishi Vishwavidyalaya, Krishinagar, Jabalpur M.P., and the release order number was obtained.

The whole plant of Triticum Aestivum was collected in the month of December and authenticated at Safia college of Science Bhopal, Madhya Pradesh. The herbarium of the plant was prepared, and the voucher specimen number 236/BOT/SAFIA/2011 was obtained.

Preparation of Triticum Aestivum Powder: The ninth day grass of Triticum Aestivum was cultivated, collected and chopped with the help of the knife. It was dried in shade and then powdered with a mechanical grinder. The powder was passed through sieve no.40 and stored in a labeled airtight container for further studies.

Preparation of Extract: Maceration process involves separation of medicinally active portions of the crude drugs. It is based on the immersion of the crude drugs in the bulk of solvent or menstruum. Solid drug material was taken in a stoppered container with about 750 ml of the menstruum and allowed to stand for at least three to seven days in a warm place with frequent shaking. The mixture of crude drug-containing solvent was filtered until most of the liquid drains off. The filtrate and the washing were combined to produce 1000 ml of the solution. This solution was kept aside for solidification and it was dried in hot air oven for 30 min at 40 ºC. The extract is then collected in a dark-colored bottle 13.

Hepatoprotective Activity: Before the conduction of the activity permission was granted by the Animal Ethical Committee of Pinnacle Biomedical Research Institute Bhopal and the protocol approval reference no. PBRI/IAEC/140 was taken. Adult albino Wistar rats weighing between 150-200 gm were used for the study. The animals were divided into four groups with six animals in each and were fed standard pellet diet and supplied water ad libitum13.

Animals of group-II (Toxicant) were given same treatment as the group I for 7 days, and on 7th day they were given oral dose of CCl4 solution 1.25 mg/kg body weight in liquid paraffin (1:1). From day 8th to day 15th no treatment was given.

Animals of group-III were given the wheatgrass extract at a dose of 500 mg/kg body weight for seven days, on a 7th-day single dose of 1.25 mg/kg body weight of CCl4 in liquid paraffin was administered and extract was continued from day 7th to day 15th.

Animals of group-IV (standard) were given Silymarin 100 mg/kg body weight for 7 days, then animals were toxicated by CCl4 and from day 7th again treated with Silymarin up today 15th.

The rats were anesthetized with chloroform and blood samples were taken by heart puncture. The serum was separated after coagulating at 37 ºC for 30 min and centrifuged at 2500 rpm for 10 min. Each animal serum was estimated for SGPT, SGOT, ALP and Total and Direct Bilirubin content Table 1. Considering the difference between Group-II (ccl4 treated) and Group-I (control) as 100% increase in serum enzyme and Bilirubin levels due to ccl4, the reduction in serum enzyme and Bilirubin levels by both standard and test drugs were estimated and results are given in Table 1.

RESULTS AND DISCUSSIONS: In the present study wheatgrass extract is evaluated and compared for its efficacy as a hepatoprotective agent in CCl4 induced hepatotoxicity in rats. The dose of 500mg/kg extract showed significant reduction in serum biochemical markers observed with standard silymarin clearly indicate its hepatoprotective activity. CCl4 is a well-known hepatotoxin which is widely used to produce liver injury in rat. This injury occurs due to (CCl3) trichloromethyl radical which binds to the cell proteins and induce necrosis. Silymarin used as a reference standard drug in the present study is a well-known hepatoprotective used in the treatment of liver diseases.

The elevation of liver enzymes in serum is an indicator of cellular leakage and loss of activities of cell membranes in the liver. Wheatgrass extract pretreatment prevented the rise in liver enzyme parameters and kept them to near normal when administered at 2.22ml/kg dose in CCl4 induced hepatic damage in rat; this may be due to the stabilization of plasma membrane as well as the repair of hepatic tissue damage caused by CCl4 toxicity.

Values are expressed as mean ± SD of 6 animals in each group. P<0.05 as compared with Toxicant. 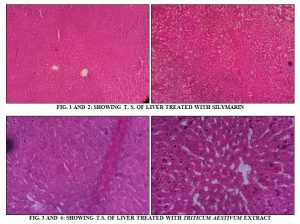 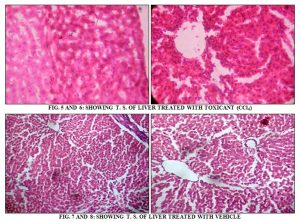 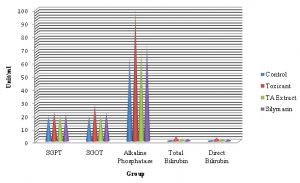 Vehicle Treated: Histological examination of the liver of control group reveals the presence of "lobules" or groups of hepatocytes arranged around a blood vessel, the central vein, and defined by loose connective tissue in which the portal canals are found.  Hepatocytes were found to be located in flat irregular plates that are arranged radially like the spokes of a wheel around a branch of the hepatic vein, called the central vein or central venule since it really has the structure of a venule. Three structures were found grouped together in the loose connective tissue surrounding the plates of hepatocytes.  These include branches of the hepatic artery, the hepatic portal vein (venule) and the intralobular bile ductule. This group of three structures has been called a portal triad or portal canal. Sinusoids were larger than conventional capillaries and less regular in shape. They are lined by thin endothelial cells. Also residing on the sinusoidal walls were macrophages called Kupffer cells.

CCl4 Treated: After histological examination of CCl4 treated animals degeneration in the centrilobular fatty section was revealed. Sinusoids were observed to be inflamed and flooded with inflammatory cells. Hepatocytes were observed to possess necrosis, degeneration, and disarrangement and in centrilobular area degeneration in fatty components was present. Focal necrosis was easily observable. Rat liver of CCl4 treated group animals revealed the dilated and congested blood cells and fatty acid changes. Lobular inflammation, change in lobular architect was present I and inflammation in sinusoids was also observed. There are extensive areas of patchy and confluent hepatocytes necrosis and lobular inflammation.

Silymarin Treated: All hepatocytes were found to be normal shape and size. Basic entities of sections were normal in architecture and constitution.

Triticum aestivum Extract Treated: In this group, significant protection was observed as sign of necrosis disappeared although few of cells were found to be inflamed with sign of macrophages. Extracts were found to be much effective in protecting hepatocytes at selected dose. It was quite difficult to ascertain any type of differences between the histology of liver of different animals with different treatment group. So, it can be said that at histological level no significant variation was present between extract treated groups.

CONCLUSION: The data obtained from the histopathological and biochemical analysis revealed the elevated level of serum enzymes viz - SGPT, SGOT, ALP, and Bilirubin in CCl4 treated group as compared to control. The group treated with Triticum aestivum extract showed a significant decrease in the levels of serum enzymes as compared with standard silymarin treated group. These studies confirmed the significant hepatoprotective action of young leaves of Triticum aestivum extract. This work can further be promoted to toxicological studies and clinical trials.