INTRODUCTION: Psoriasis is a psychosocially, and at times medically, debilitating disorder that affects 1% to 3% of the population worldwide. Although psoriasis is undoubtedly distressing, affected individuals are typically otherwise healthy and thus well suited to thoughtful outpatient care. Recent advances in our understanding of psoriasis have provided parallel advances in topical treatments. Appropriate knowledge and use of these therapies is vital to both dermatologists and family physicians caring for patients with psoriasis 1. The goal of treatment is lifetime control. About 75% of patients have mild-to-moderate psoriasis, amenable to topical treatment. Psoriasis is a disease without a lasting cure. Yet it is the subject of active research that provides frequent therapeutic advances. As knowledge progresses, more efficacious treatments with fewer side effects become available. Awareness of these advances in therapy is the responsibility of physicians caring for patients with psoriasis 2, 3.

Psoriasis is very common and causes substantial morbidity. Because most psoriasis is mild to moderate, patients are well suited to outpatient topical therapy. Advances in topical treatments for psoriasis have kept pace with a rapidly evolving comprehension of its pathogenesis, making a review of current therapies useful for those who treat psoriasis 4.

What is Psoriasis: Psoriasis is a chronic skin disorder marked by periodic flare-ups of sharply defined red patches covered by a silvery, flaky surface. The primary disease activity leading to psoriasis occurs in the epidermis, the top five layers of the skin.

What is the cause of Psoriasis: The precise causes of psoriasis are unknown. It is generally believed that psoriasis is a disorder in which factors in the immune system, enzymes, and other biochemical substances that regulate skin cell division become impaired. This abnormal immune response causes rapid proliferation of keratinocytes (immature skin cells) and inflammation. Such events are likely to be triggered by environmental factors, such as weather or stress, in people with genetic factors that make them susceptible 6-7.

Pathophysiology of Psoriasis: The cause of psoriasis is not fully understood. There are two main hypotheses about the process that occurs in the development of the disease. The first considers psoriasis as primarily a disorder of excessive growth and reproduction of skin cells. The problem is simply seen as a fault of the epidermis and its keratinocytes. The second hypothesis sees the disease as being an immune-mediated disorder in which the excessive reproduction of skin cells is secondary to factors produced by the immune system. T cells (which normally help protect the body against infection) become active, migrate to the dermis and trigger the release of cytokines (tumor necrosis factor-alpha TNF α, in particular) which cause inflammation and the rapid production of skin cells. It is not known what initiates the activation of the T cells. The immune-mediated model of psoriasis has been supported by the observation that immunosuppressant medications can clear psoriasis plaques. However, the role of the immune system is not fully understood, and it has recently been reported that an animal model of psoriasis can be triggered in mice lacking T cells. Animal models, however, reveal only a few aspects resembling human psoriasis.

Genetic basis of Psoriasis: Psoriasis and associated psoriatic arthritis (PsA) are complex genetic diseases with environmental and genetic components. Approximately 10- 30% of patients with psoriasis develop PsA. This suggests that susceptibility factors for psoriasis are also susceptibility factors for PsA. However, the development of PsA in psoriasis patients may require additional environmental stimuli or additional genetic factors that predispose to inflammation of the joints as well as the skin. Interestingly, in psoriasis, arthritis, and autoimmune arthritis in mice, self-reactive T cells do not destroy synoviocytes but stimulate them to proliferate. This may be due a genetic predisposition leading to a high sensitivity of synoviocytes or keratinocytes in patients to various activating stimuli. Other variants may result in inflammatory cells with a lower threshold for activation or a prolonged state of activation. This hypothesis is supported by the examples provided below where variants associated with the development of arthritis or psoriasis is frequently associated with the immune system8.

Cellular basis of Psoriasis: Although psoriasis vulgaris is usually identified by the clinical appearance of characteristic red, raised, scaly skin lesions, it is best defined as a unique skin disease by a set of underlying cellular changes (histopathology). Clinical features, then, are explained by impressive growth and dilation of superficial blood vessels (redness) and equally impressive hyperplasia of the epidermis. Epidermal growth occurs in a pattern termed ‘‘psoriasiform’’ hyperplasia, which describes both elongated rete pegs, thickening (acanthosis), and differentiation changes (Fig. 1). 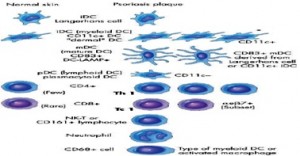 FIG. 1: THE ARRAY OF LEUCOCYTES SUBSETS THAT APPEAR IN PSORIASIS VULAGARIS

Accordingly, poorly adherent stratum corneum is formed and this results in the characteristic scale or flakes of psoriasis lesions. Psoriasis vulgaris is a disease of interfollicular epidermis, and it does not significantly alter the growth of follicular epithelia or the normal hair growth cycle. Rarely, a few small pustules can be identified in very inflamed psoriasis plaques, but usually leucocyte infiltration in psoriasis plaques is a microscopic finding. The appearance of mononuclear leucocytes in papillary dermis and polymorphonuclear leucocytes in the stratum corneum are defining features of psoriasis histopathology. However, even with this characteristic array of cellular changes, it is necessary to exclude skin infection by yeast or fungi, since the immune reaction to these microbes can produce a virtually identical histological picture.9-10

Herbal Medicine- A Current Status: In ancient cultures of some countries like India, China, Egypt, Greek, Rome and Syria people methodologically and scientifically collected information on herbs which lead to introduction of Herbal Pharmacopoeias. The classical examples are Charak Samhita and Sushruta Samhita in India. Despite the importance of plant-lead discoveries in the evolution of medicine, some regulatory bodies such as U.S. Food and Drug Administration (FDA) consider herbal remedies to be insignificant or potentially dangerous. Indeed today in United States, herbal products can be marketed only as food supplements under Dietary Supplement Health and Education Act of 1994 (DSHEA).

Future Drug Development: Historically, agents used to treat psoriasis were discovered by experimentation or by accident. In contrast, current novel therapeutic agents are designed from a better understanding of the immune processes involved in psoriasis and by the specific targeting of molecular mediators. Examples can be seen in the use of biologics, which target T cells and TNF inhibitors. It has been suggested that cannabis might treat psoriasis, due to the anti-inflammatory properties of its cannabinoids, and the regulatory effects of THC on the immune system. The adverse effects of cannabis might be overcome by use of more specific cannabinoid receptor medications, to inhibit keratinocyte proliferation.

Future innovation should see the creation of additional drugs that refine the targeting of immune-mediators further.

CONCLUTION: Today, psoriasis vulgaris is recognized as the most prevalent autoimmune disease caused by inappropriate activation of the cellular immune system. Psoriasis has a significant impact not only the patient health but also on a patient’s quality of life - sometimes profoundly altering their everyday life.

Understanding the genetic, cellular and biochemical mechanisms behind the pathogenesis of psoriasis vulgaris has provided the basis for the development of treatments that more adequately control this physically and psychologically debilitating disease. In today scenario, there are lots of medications in different system to treat the psoriasis diseases in topical treatment but herbal remedies have a great potency because it have a lesser side effect or toxic effect with compare to other system. Instead of that herb-herb interaction to overcome the adverse effect, antagonist effect & the bioavailability of drug.