INTRODUCTION:In the last few years, there has been an exponential growth in the field of herbal medicine and these drugs are gaining popularity both in developing and developed countries because of their natural origin and less side effects. Many traditional medicines in use are derived from medicinal plants, minerals and organic matter 1. Early humans recognized their dependence on nature for a healthy life and since that time humanity has depended on the diversity of plant resources for food, clothing, shelter, and medicine to cure myriads of ailments.

Led by instinct, taste, and experience, primitive men and women treated illness by using plants, animal parts, and minerals that were not part of their usual diet 2. The use of plant-based health products was also increased in other European countries 3. Export–Import Bank reports reveal that the global trade of plant-derived and plant originated products is around US $60 billion (with growth of 7% per annum) where India holds stake of US $1 billion which is expected to reach 3 trillion US$ by the end of 2015 4, 5.

Disease Profile: Alzheimer's disease (AD) is a progressive inexorable loss of cognitive function associated with the presence of senile plaques in the hippocampal area of the brain. The disease is the most common form of dementing illness among middle-aged and older adults, affecting more than 5 million Americans, a number estimated to increase to 7.7 million by 2030.

Symptoms typically appear after age 60, and some early-onset forms of the disease are linked to a specific genetic defect. Although the etiology is unknown, genetic factors clearly play a role in 10% to 15% of cases 6.

Alzheimer's disease is characterized as a progressive neurodegenerative disorder and considered as prominent cause of dementia in the elderly. The main characteristics of this disease are difficulties in household handling routine and cognitive and emotional disturbance in the elderly. Dementia is a loss of brain function that occurs with certain diseases. Alzheimer's disease is one form of dementia that gradually gets worse over time. It affects memory, thinking, and behavior [7]. So far, efforts to find a cure for AD have been disappointing, and the drugs currently available to treat the disease address only its symptoms and with limited effectiveness. The underlying pathogenesis is a loss of neurons in the hippocampus, cortex, and subcortical structures [8]. 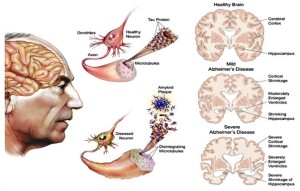 FIG. 1:  NEUROLOGICAL DAMAGE LEADS TO THE DECREASE OF CORTICAL AND HIPPOCAMPAL SIZE. The hippocampus is involved in memory processing.

There are two types of AD:

Most people with Alzheimer’s disease have “late-onset” Alzheimer’s, which usually develops after age, 60. Many studies have linked the APOE gene to late-onset Alzheimer’s. This gene has several forms. One of them, APOE ε4, seems to increase a person’s risk of getting the disease. However, carrying the APOE ε4 form of the gene does not necessarily mean that a person will develop Alzheimer’s disease, and people carrying no APOE ε4 can also develop the disease.

3.      Environmental/lifestyle factors: Research also suggests that a host of factors beyond basic genetics may play a role in the development and course of Alzheimer’s disease. There is a great deal of interest, for example, in associations between cognitive decline and vascular and metabolic conditions such as heart disease, stroke, high blood pressure, diabetes, and obesity. Understanding these relationships and testing them in clinical trials will help us understand whether reducing risk factors for these conditions may help with Alzheimer’s as well 10.

Prevention: At present, there is no definitive evidence to support that any particular measure is effective in preventing AD. Global studies of measures to prevent or delay the onset of AD have often produced inconsistent results. However, epidemiological studies have proposed relationships between certain modifiable factors, such as diet, cardiovascular risk, pharmaceutical products, or intellectual activities among others, and a population's likelihood of developing AD. Only further research, including clinical trials, will reveal whether these factors can help to prevent AD 12.

Although cardiovascular risk factors, such ashypercholesterolaemia, hypertension, diabetes, and smoking, are associated with a higher risk of onset and course of AD, statins, which are cholesterol lowering drugs, have not been effective in preventing or improving the course of the disease 13. The components of a Mediterranean diet, which include fruit and vegetables, bread, wheat and other cereals, olive oil, fish, and red wine, may all individually or together reduce the risk and course of Alzheimer's disease. There is limited evidence that light to moderate use of alcohol, particularly red wine, is associated with lower risk of AD 14.

The early symptoms of AD can include:

a)      Difficulty performing tasks that take some thought, but used to come easily, such as balancing a checkbook, playing complex games (such as bridge), and learning new information or routines.

b)      Getting lost on familiar routes.

c)      Language problems, such as trouble finding the name of familiar objects.

As the AD becomes worse, symptoms are more obvious and interfere with your ability to take care of yourself. Symptoms can include:

a)      Change in sleep patterns, often waking up at night.

e)      Forgetting events in your own life history.

People with severe AD can no longer:

c)      Perform basic activities of daily living, such as eating, dressing, and bathing 15.

Diagnosis: Alzheimer's disease is usually diagnosed clinically from the patient history, collateral history from relatives, and clinical observations, based on the presence of characteristic neurological and neuropsychological features and the absence of alternative conditions. Advanced medical imaging with computed tomography (CT) or magnetic resonance imaging (MRI), and with single photon emission computed tomography (SPECT) or positron emission tomography (PET) can be used to help exclude other cerebral pathology or subtypes of dementia. The diagnosis can be confirmed with very high accuracy post-mortem when brain material is available and can be examined histologically 16.

1.      Criteria: The National Institute of Neurological and Communicative Disorders and Stroke (NINCDS) and the Alzheimer's disease and Related Disorders Association (ADRDA, now known as the Alzheimer's Association) established the most commonly used NINCDS-ADRDA Alzheimer's Criteria for diagnosis in 1984, extensively updated in 2007.

These criteria require that the presence of cognitive impairment, and a suspected dementia syndrome, be confirmed by neuropsychological testing for a clinical diagnosis of possible or probable AD. A histopathologic confirmation including a microscopic examination of brain tissue is required for a definitive diagnosis. Eight cognitive domains are most commonly impaired in AD-memory, language, perceptual skills, attention, constructive abilities, orientation, problem solving and functional abilities 17.

2.      Techniques: Neuropsychological screening tests can help in the diagnosis of AD. In the tests, people are instructed to copy drawings similar to the one shown in the picture, remember words, read, and subtract serial numbers. Neurological examination in early AD will usually provide normal results, except for obvious cognitive impairment, which may not differ from that resulting from other diseases processes, including other causes of dementia 18.

Blood tests can identify other causes for dementia than AD—causes which may, in rare cases, be reversible. It is common to perform thyroid function tests, assess B12, rule out syphilis, rule out metabolic problems (including tests for kidney function, electrolyte levels and for diabetes), and assess levels of heavy metals (e.g. lead, mercury) and anaemia. Psychological tests for depression are employed, since depression can either be concurrent with AD (see Depression of Alzheimer disease), an early sign of cognitive impairment, or even the cause 19.

Volumetric MRI can detect changes in the size of brain regions. Measuring those regions that atrophy during the progress of Alzheimer's disease is showing promise as a diagnostic indicator. It may prove less expensive than other imaging methods currently under study 21.

The person does not experience any memory problems. An interview with a medical professional does not show any evidence of symptoms of dementia.

The person may feel as if he or she is having memory lapses, forgetting familiar words or location of everyday objects.  But no symptoms of dementia can be detected during medical examination or by friends, family or co- workers.

Friends, family and co-workers begin to notice the difficulty. During a detailed medical interview, doctors may be able to detect problems in memory or concentration.

At this point, a careful medical interview should be able to detect clear- cut systems in several areas:

a)      Forgetfulness of recent events.

b)      Forgetfulness about one’s own personal history.

Gaps in memory and thinking are noticeable, and individuals begin to need help with day-to-day activities. At this stage, those with alzheimer’s may:

a)      Be unable to recall their own address or telephone number or the high school or college from which they graduated.

c)      Have trouble with less challenging mental arithmetic; such as counting backward from 40 by subtracting 4s or from 20 by 2s

d)     Need help choosing proper clothing for the season or the occasion.

Memory continues to worsen, personality changes may take place and individuals need extensive help with daily activities. At this stage, individuals may:

a)      Lose awareness of recent experiences as well as of their surroundings.

c)      Remember their own name but have difficulty with their personal history.

d)     Have increasingly frequent trouble controlling their bladder or bowel.

e)      Distinguish familiar and unfamiliar faces but have trouble remembering the name of a spouse.

In the final stage of this disease, individuals lose the ability to respond to their environment to carry on a conversation and, eventually, to control movement. They may still say words.

At this stage, individuals need help with much of their daily personal care, including eating or using the toilet. They may also lose the ability to smile, to sit without support and to hold their hands up 23.

Medicines for AD include:

Other medicines may be needed to control aggressive, agitated, or dangerous behaviors. Examples include haloperidol, risperidone, and quetiapine. These are usually given in very low doses due to the risk of side effects including an increased risk of death.

It may be necessary to stop any medications that make confusion worse. Such medicines may include painkillers, cimetidine, central nervous system depressants, antihistamines, sleeping pills, and others. Never change or stop taking any medicines without first talking to your doctor [24].

CONCLUSION: Generally, there is significant evidence supporting a role of the ACH in AD. As cholinergic function is essential for short-term memory, the cholinergic insufficiency in AD was also believed to be dependable for much of the short-term memory deficit. The management of AD remains a challenge in the modern medicine because of the pathogenesis of AD is a difficult process relating both genetic and environmental factors, therefore herbal medicines are regarded as new and promising sources of potential anti-AD drugs. Herbal medicines have prospective to treat AD because of their cognitive benefits and more significantly, their mechanisms of action with respect to the fundamental pathophysiology of the disease. Our review has acknowledged several herbal medicines with potential therapeutic effects for AD. However, no serious adverse events were reported. Moreover, the future direction should highlight the trial of new herbs that are potentially successful in treating the root of the disease.

ACKNOWLEDGEMENT: The authors are thankful to the authorities and Vice- Chancellor of Bundelkhand University Jhansi for providing support to the study and other necessary facility like internet surfing, library and other technical support to write a review article.