ABSTRACT: Mononuclear ruthenium(II) complexes of the type [Ru(bpy)2(L)] (PF6)2, where L=4,5-bis(4-dimethyaminophenyl)-1H, 1 'H-2,2'-biimidazole (1) and 4,5-bis (4-fluorophenyl) - 1H, 1' H-2,2'-biimidazole (2) have been synthesized and characterized by elemental analyses and  spectroscopic techniques such as UV-visible, IR and ESI-MS. The redox behavior of the complexes has been studied by cyclic and differential pulse voltammetry. Both the complexes show reversible electrochemical wave attributable to Ru(II)/Ru(III) couple. The complexes exhibit half-wave potential (E1/2) values of +0.8698 V for the complex 1 and +0.8395 V for the complex 2 respectively. Electrophoretic studies showed that the complexes are able to cleave supercoiled plasmid DNA more effectively in the presence of light at the wavelength of 480 nm. The mode of action of DNA cleavage activity was studied using DMSO and histidine. DPPH method has been adopted to find the radical scavenging activity of the newly synthesized ligands and complexes. The cytotoxic activity of these complexes was evaluated by 3-(4,5-dimethylthiazol-2-yl)-2,5-diphenyltetrazolium bromide (MTT) assay against MCF7 breast cancer cell lines.

INTRODUCTION: Making use of different properties of metal ions, new anticancer agents are being developed in the field of medicinal inorganic chemistry.1 Conversely, metal-based therapeutics finds some limitations thereby emerging the scientists to develop new drugs. The clinical success of cisplatin as an anticancer drug has promoted the research in this field to contribute more against cancerous cells.

Among the non-platinum complexes developed, ruthenium complexes are of promising interest because these complexes show a lower toxicity with biologically accessible oxidation states than platinum-based drugs. 2-4 Over the past few decades ruthenium complexes with polypyridyl ligands have found applications as DNA structural probes and mediators of DNA cleavage reaction by utilising their photophysical and electrochemical properties. 5-8 Owing to their good anticancer or antibacterial properties, several water soluble metal complexes attracted considerable interest. On comparing the metal complexes reported, the ruthenium complexes have certain advantages because of its solubility in water as well as low toxicity.

DNA Cleavage Activity: DNA cleavage experiment was performed by agarose gel electrophoresis method. The efficiency of DNA cleavage was measured by determining the ability of the complexes to form open circular (OC) and nicked circular (NC) DNA from its super coiled (SC) form. The supercoiled DNA in tris(hydroxymethyl)methane–HCl (Tris-HCl) buffer (pH 7.2) was treated with the metal complex (0–48 µM) followed by dilution with the buffer to the total volume of 25 μL. Each solution was incubated for 1 hour and then irradiated at 440 nm. The samples after irradiation were added to the loading buffer and the solution was finally loaded on 0.8% agarose gel(tris-boric acid-EDTA buffer, pH 8.0) containing 0.5 μg mL−1 ethidium bromide at 50 V for 2 h. The stained gel was illuminated under UV lamp and gel documented. In a separate experiment the DNA was incubated with 48 µM of the metal complex and 10 mM of histidine and irradiated at 440 nm. The irradiated solution was then subjected to electrophoresis.

Antioxidant Activity: The newly synthesized compounds were tested for their in vitro antioxidant activity by DPPH method.

DPPH free radical scavenging activity: 1,1-Diphenyl-2-picrylhydrazyl (DPPH) is a stable free radical having maximum optical absorbance at 517 nm. A stock solution (1 mg/mL) was diluted to final concentrations of 5-20 µg/mL. An ethanolic DPPH solution was added to sample solutions in DMSO at various concentrations (5-20 µg/mL). The test tubes were kept at an ambient temperature for 30 minutes. The absorbance of the sample solutions containing ligands and their ruthenium complexes were measured at 517 nm using UV-Visible spectrophotometer.  These measurements were run in triplicate. The percentage of scavenging activity was calculated as follows:

In vitro Cytotoxicity Assay: 3-[4,5-dimethylthiazol-2-yl] 2, 5 - diphenyltetrazolium bromide (MTT) is a yellow water soluble tetrazolium salt. A mitochondrial enzyme in living cells, succinate-dehydrogenase, cleaves the tetrazolium ring, converting the MTT to an insoluble purple formazan. Therefore, the amount of formazan produced is directly proportional to the number of viable cells.

After 24 h, the medium was replaced with the respective medium with 1 % FBS containing the compounds at various concentrations and incubated at 37⁰C, 5 % CO2, 95 % air and 100 % relative humidity for 48 h. Experiments were performed in triplicate and the medium without the compounds served as control. After 48 h, 15 µL of MTT (5 mg mL-1) in phosphate buffered saline (PBS) was added to each well and incubated at 37 ⁰C for 4 h. The medium with MTT was then removed and the formed formazan crystals were dissolved in 100 mL of DMSO and the absorbance measured at 570 nm using a micro plate reader. The % cell inhibition was determined using the following formula, and a graph was plotted between % of cell inhibition and concentration. From this plot, the IC50 value was calculated. The % cell inhibition was determined using the following formula.

Synthesis and Characterization: The mixed ligand ruthenium(II) complexes with formula [Ru(bpy)2(L)](PF6)2 (where L=4,5-bis(4-dimethy aminophenyl)-1H,1'H-2,2'-biimidazole (1) and 4,5-bis(4-fluorophenyl)-1H,1'H-2,2'-biimidazole (2)) have been isolated from an aqueous ethanolic solution containing [Ru(bpy)2(Cl)2].2H2O as the starting material. Both the complexes were obtained in good yield and were characterized by using elemental analysis, UV-Vis, EI-MS and IR spectral techniques. The positive ion electron ionization mass spectra of the ruthenium(II) complexes 1 and 2 showed a major peak at 1076.71 and 1026.23 respectively. 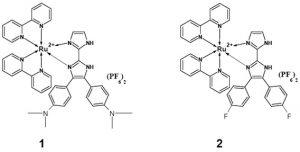 The analytical and mass spectral data are consistent with the proposed formula of the ruthenium(II) complexes. The IR spectra of the free ligands and their ruthenium(II) complexes were compared. In the IR spectrum of both complexes, absorption bands appeared in the region 1379 – 1462 cm-1 indicates the presence of aromatic skeleton. The IR spectra show the characteristic peaks for the imidazole N-H stretch at 3429 and 3394 cm-1 for the complex 1 and 2 respectively. In the IR spectra of free ligands L1 and L2, the bands due to νNH absorption appeared at 3479 and 3435 cm-1 respectively.

The ground state of ruthenium(II) (t2g6 configuration) is 1A1g. For a hexacoordinate ruthenium(II) complex, four transitions corresponding to 1A1g → 3T1g; 1A1g → 3T2g; 1A1g → 1T1g and 1A1g →1T2g are possible. The electronic spectra of the complexes showed high intensity π−π* transitions in the 279-283 nm range for bipyridine ligand. The peaks observed in the region 321-329 nm were attributed to the ligand molecules L1 and L2.

The visible region of both complexes exhibited weak and broad absorption bands which are due to ruthenium(II) d−π* MLCT in the 474-478 nm range. This data suggests octahedral geometry for both ruthenium(II) complexes.

DNA Cleavage Activity of Ruthenium(II) Complexes: Agarose gel electrophoresis method was employed to monitor the degree of DNA cleavage by the newly synthesized compounds. Fig. 2 show that the present complexes did not exhibit any cleavage activity in the absence of light. On the other hand, on irradiating the compounds in the presence of light at the wavelength of 480 nm, cleavage of supercoiled plasmid DNA has been observed even at a concentration of 24 µM.

In order to find out the reactive species involved in the cleavage mechanism, a control experiment with DMSO (hydroxyl radical scavenger) and histidine (singlet oxygen quencher) has been carried out. From the Fig. 2 it has been observed that both the quencher molecules did not affect the cleavage of DNA brought about by photo irradiated complexes 1 and 2. This clearly shows that the complexes cleave the DNA by direct guanine oxidation rather than through singlet oxygen.

Investigation of Antioxidant Activity: The free radical scavenging ability of the metal complexes was determined by their interaction with the stable free radical 2, 2’-diphenyl-1-picryl hydrazyl. 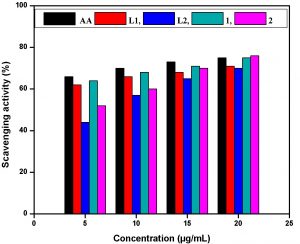 FIG. 3: ANTIOXIDANT ACTIVITY OF LIGANDS AND THEIR RUTHENIUM(II) COMPLEXES

The synthesized ligands and their metal complexes were screened for the reduction of DPPH at the concentrations of 5-20 µg/mL. Among them complexes showed good activity in DPPH scavenging comparable with the ligands. The antioxidant activity results are shown at Fig. 3 and compared with the control standard AA. Lower absorbance values of the reaction mixture indicated higher free radical scavenging activity. A graph may be plotted with % scavenging effects on the y- axis and concentration (µg/mL) on the x- axis. Out of the two synthesized complexes, complex 2 showed a significant scavenging activity than 1. This might be attributed to the presence of more electron withdrawing fluoride moiety in the complex 2. The radical scavenging activity of the present complexes follows the order 2 > 1.

Antiproliferative Activity of Ruthenium(II) Complexes: The present study examined the efficacy of ruthenium(II) complexes to inhibit the human breast cancer cell line (MCF-7) as determined by MTT assay. The cells were treated with five different concentrations ranging from 0.25 to 100 µM. The complexes suppressed the growth of breast cancer cell lines in a dose dependent manner. The maximum cell inhibitions of 95.10 and 77.22 % at 100 µM concentration were determined for 2 and 1 respectively and minimum inhibitions (4.48 and 11.69 %) at 0.25 µM concentration were observed for 2 and 1 respectively.

From the results presented in Table 2, it is clear that several ruthenium complexes exhibited a marked inhibitory effect on the proliferation of MCF-7 cancer cells. The IC50 values for complexes treated with MCF-7 cells were obtained at 16.42 and 18.25 µM for 1 and 2 respectively. Out of the two complexes tested, IC50 value for 1 is found to be less, suggesting that 1 could exert very strong anti-proliferative effect when compared to complex 2 tested with breast cancer cell lines at low doses. The complexes exhibited higher cytotoxic effects on breast cancer cells with lower IC50 values indicating their efficiency in killing the cancer cells even at low concentrations.

CONCLUSIONS: Biimidazole based ligands derived from substituted benzils and imidazolde aldehyde and their corresponding ruthenium(II) complexes have been synthesized and characterized using various spectroscopic and electrochemical techniques. The electrochemical properties of the complexes have been found to be quasi-reversible. The complexes are able to cleave DNA in the presence of light radiation. Also they exhibit a better antioxidant and anticancer activities against MCF-7 breast cancer cell lines.

ACKNOWLEDGEMENT: MK thanks UGC, New Delhi, India, for providing financial support in the form of MRP.

CONFLICT OF INTEREST: The authors have no potential conflict of interest.