ABSTRACT: Soybean is one of the highest isoflavones source. Isoflavones are one type of phytoestrogen that have a chemical structure similar to estradiol, that’s why it can be used not only to inhibite but also to prevent many symptoms related deficiency of estrogen. However in the small intestine, isoflavones like genistin will be hydrolyzed by β-glucosidase and produce aglycone like genistein, this process can be optimized by hydrolysis with enzyme or chemical. The aim of this study was to obtain the extract of soybean that hydrolysed by hydrochloric acid and to obtain scientific data about the content of genistein in the extract by High Performance Liquid Chromatography (HPLC). Analysis of samples by HPLC using C18 reverse phased column. Genistein standard with a concentration 8 ppm, 10 ppm, 12 ppm respectively diluted with methanol: water (8:2) as much as 5 ml. Soybean extract, weighed as much as 3 mg and dissolved in 10 ml of methanol: water (8: 2). Standard and sample then analyzed with the mobile phase used was methanol: water (7:3), a flow rate of 1 ml/min with a temperature of 28 °C, at a wavelength of 254 nm. From the results, show that average of genistein levels contained in the extract of soybean hydrolyzed for Glycine max is 0.5% and Glycine soja is 1.1%.

INTRODUCTION: Soybean (Glycinemax (L). Merrill) is a source of complete food with a high nutrient content and good. Soybean seeds are a source of high quality protein, oligosaccharides, dietary fiber, minerals and phytochemicals particularly isoflavones. Levels of isoflavones in soybean seed is the highest among hypocotyledon group (> 20 mg / g) 1, 2, 3, 4.

Actually soybeans are cultivated in two species, namely Glycinemax (yellow, white or green soybean) and Glycinesoja (black soybean). Glycinemax is native to subtropical regions of Asia such as China and Southern Japan, while Glycinesoja is native to tropical Asia in Southeast Asia.

This plant has spread to Japan, Korea, Southeast Asia and Indonesia. According to Indonesia National Standard (SNI)-01-3922-1995, soybeans can be divided into four, namely yellow soybeans, black soybeans, green soybeans and soy mix, while according Sniyeder and Kwon (1987), all originally green soybeans because of their chlorophyll content, but after maturity the chlorophyll becomes invisible 5.

Soybean is known to contain very high isoflavone compounds, isoflavones are compounds that have a molecular similarity to estrogen that has been used to the clinical symptoms in women postmenopaus such as diabetes, cardiovascular disease, breast cancer and bone health 6. Soybean has a good potential as antimitotic with IC50 = 3.79 x 10-4 mg/mL7.

Hydrolysis process can be done by adding a microbiology probiotic bacteria in soymilk. Results of research conducted by Fawwaz showed that the levels of genistein in soy fermented by Lactobacillus acidophilus by 3.46% 9, and genistein levels previously obtained through the fermentation of soybean by Lactobacillus bulgaricus by 4.99% 10. Hydrolysis can also be done chemically by the addition of hydrochloric acid11. Based on previous research, this study was conducted to determine how many levels of genistein contained in the extract of soybean that is hydrolyzed by chemical methods, determined by HPLC (High Performance Liquid Chromatography).

Analysis of samples was conducted using High Performance Liquid Chromatography (HPLC), used C18 reverse phased column. Genistein standard with a concentration of 40 ppm and then diluted with methanol: water (8:2) to obtain a concentration of 8 ppm, 10 ppm, 12 ppm respectively as much as 5 ml. Series of concentration is then automatically injected into the tool as much as 10 mL. The mobile phase used was methanol: water (7:3), a flow rate of 1 ml/min with a temperature of 28°C, at a wavelength of 254 nm. Data obtained in the form of an area, then determined the values of a, b and r by comparing the sample concentration (ppm) to the area. Created the linear regression equation y = a + bx 8, 9. Soybean extract, weighed as much as 3 mg and dissolved in 10 ml of methanol: water (8: 2). Inserted into the HPLC instrument and then analyzed. The results of the analysis will be obtained area (y) which is in turn embedded in the linear regression equation 9.

Isoflavone aglycone could be found if soybean was hydrolyzed; by hydrolyzing glycoside binding will be solved. Soybean hydrolyzed result was extracted with ethanol. We found extract of Glycine max 2.67 g and Glycine soja1.87 g.

Pure standard genistein was used as isoflavone aglycone to identify and calculate the amount of genistein in extract soybean hydrolyzed. The result of linear regression, we found y = 108918x – 418941, and R2 = 0.996. 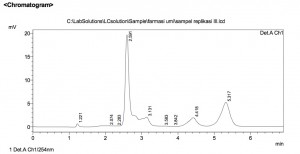 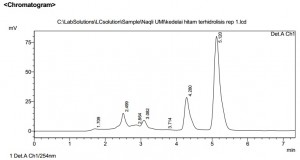 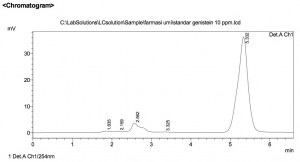