INTRODUCTION: The genera of family Marchantiaceae are well known in traditional Chinese medicinal herbs and used to treat skin diseases, protect liver and treat hepatitis. In some regions of China these are also used as antipyretic 1-3. Many studies on the antimicrobial activities of many species of Marchantia such as M. polymorpha, M. convoluta and M. paleacea were reported 4, 5. Many Marchantia species were studied for the bioactive components, particularly the conjugated polyphenols 6. In ancient China Marchantia species had been used as herbal medicines. Marchantia polymorpha was used to cure cuts, fractures, poisonous snake bites, burns, scalds and open wounds and it has antipyretic, antihepatic, antidotal, diuretic activity 7.

The thick paste of M. palmata thalli is directly applied during acute inflammation caused by the touch of fire and hot water 8. To cure skin borne allergies Marchantia linearis is used by Wayanad Kurichya, Kattunaikkanstribes 9.

Chemical constituents and bioactivities of M. convoluta were evaluated in many studies which reported the presence of flavonoids, triterpenoids and steroids 10. From Marchantia emarginata bis(bibenzyl and Humulane-type sesquiterpenes 11 and from M. polymorpha Marchantin A, a macrocyclic bisbibenzyl ether that inhibits protozoal growth in-vitro were isolated and characterized 12.

Amino acids are organic substances containing both amino and acid groups. They are building blocks of proteins and required by the human body as they act as precursors of other nitrogen containing compounds, e.g., nucleic acids.  Phenylalanine, valine, methionine, leucine, isoleucine, lysine, histidine, threonine and tryptophan are the essential amino acids for humans 13. Essential amino acids are not synthesized in the body and their exogenous supply is useful in a variety of metabolic activities. Weak immune system, nausea, dizziness, stomach problems and loss of antibody production are sometimes due to the deficiency of amino acids 14. They play vital role in the metabolism of secondary metabolites 15. They are used in industry such as, in the synthesis of cosmetics and drugs and for the production of biodegradable plastics.

The effect of exogenous amino acids on the development of Marchantia polymorpha gemmalings revealed the alteration in normal developmental pattern and morphological irregularities by the addition of arginine, histidine, hydroxyproline, lysine and tryptophan 20. The sporophyte of Polytrichum formosum was analyzed at different development stages to study the quantitative changes in free amino acids which revealed the presence of glutamic acid, aspartic acid and arginine in significant amount 21.

Literature survey revealed that no HPTLC method has been reported for quantification of amino acids from liverworts.

In the recent researches, HPTLC plays an important role in quantification of plant products because of its low cost, simplicity, rapidity and need of very small sample. For the quantification of some amino acids, a denstimetric HPTLC method has been developed. The present investigation on liverworts provides valuable information about the presence or absence of amino acids that gives an indication of potential medicinal and nutritive value for human welfare.

Collection and preparation of Plant material

The dried and powdered plant material (200mg) was homogenized in methanol: chloroform: water solution (12:5:3). The homogenate was incubated for 24 hours at 40C and centrifuged at 2500 rpm for 20 min. at 40C. The obtained supernatant was mixed again with 0.5 ml chloroform and 0.75 ml of distilled water and centrifuged again. Supernatant so obtained was maintained at 380C for about two hours and then subjected to freeze drying for further analysis.

TLC aluminum precoated plate with silica gel 60 F254 (10×10 cm) was used with three mobile phases. The extracts of sample and mixture of standards were applied to the plate with an automatic TLC sampler. The plate was dried in the oven. Camag twin trough glass chamber (10×10 cm) with stainless lid was used for the development of TLC plate. The twin trough glass chamber was saturated with mobile phase for 50-55 minutes. The plates were removed from the chamber and oven dried for one minute at 110°C. Then plates were dipped in 1% ninhydrin in methanol by using camag chromatogram immersion device 111 followed by heating at 1100C for 3-5 minutes. HPTLC finger print profile was snapped by Camag reprostar III before derivatization.The plate was scanned before derivatization using camag TLC scanner III at wavelengths 484nm, 500nm and 486nm. Wincats 1.4.2 software was used for the detection as well as evaluation of the data.

A stock solution of standard amino acids (100µg/ml) was prepared in distilled water. The different volumes of the stock solution were spotted on the plate in triplicate to obtain concentration 400, 600 and 800 ng/spot. The linear regression line and correlation coefficient are given in the Table 1. Peaks of amino acids (standard and samples) were obtained when the plate was scanned at wavelengths484nm, 500nm and 486nm (Fig.1-9). 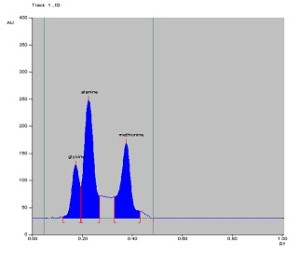 FIG.1: CHROMATOGRAM OF STANDARDS AT ALANINE, GLYCINE, AND METHIONINE AT 484nm 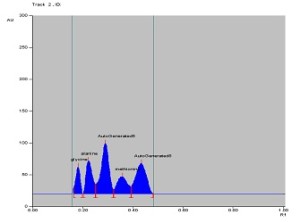 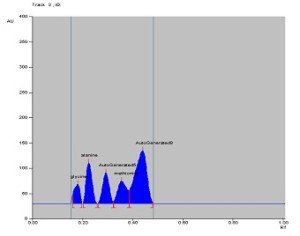 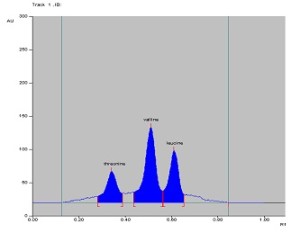 FIG.4: CHROMATOGRAM OF STANDARDS THREONINE, VALINE AND LEUCINE AT 486nm 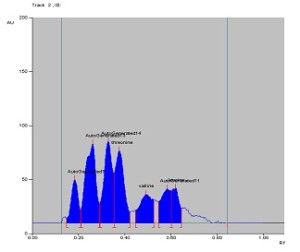 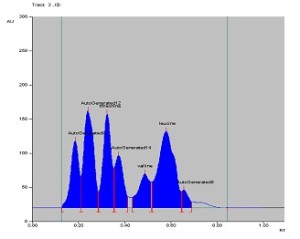 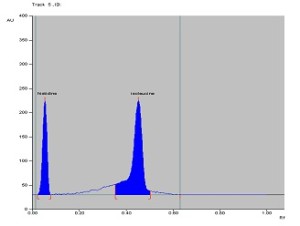 FIG.7: CHROMATOGRAM OF STANDARDS HISTIDINE AND ISOLEUCINE AT 500nm 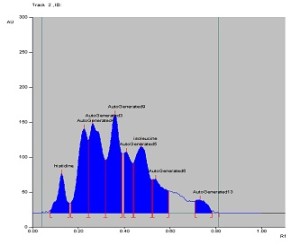 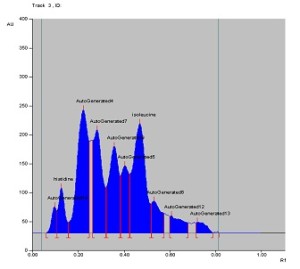 Amino acids play central role both as intermediates in metabolism and as building blocks of proteins. They are linked by covalent peptide bonds (-CO-NH-) into the polypeptide chain. The precise amino acid content and the sequence of those amino acids are determined by the sequence of the bases in the gene that encode that protein. The chemical properties of the amino acids of proteins determine the biological activity of the protein. Proteins are essential for normal function and maintenance of body tissues. Essential amino acids cannot be synthesized by the organism and, therefore, must be supplied in the diet and regarded as essential for humans. The non- essential amino acids also play a vital role in human nutrition and metabolism 22.

Alanine helps in the metabolism of sugars, strengthens the immune system by producing antibodies and used as source of energy for muscle tissue. The content of alanine in these plants may be one of the factors in sugar metabolism. Methionine is used by the plants for synthesis of ethylene which is widely used in the chemical industry. The presence of methionine in both the species of Marchantia indicates the use of these plants in chemical industry. Leucine and isoleucine provide important ingredients for manufacturing biochemical components in the body 14.

Valine plays role in the repairing of tissue, regulating blood sugar and responsible for the normal human growth. Lack of it causes mental and neurological disorder. Histidine is precursor of histamine which performs a number of functions. It plays an important role in central nervous system as a neurotransmitter and neuromodulator. Leucine, isoleucine, valine and histidine are essential amino acids for humans so their presence in Marchantia species indicates their use in pharmaceutical

industries. Hence the presence of these amino acids in this genus is definitely related to the use of these plants since ancient days.

CONCLUSIONS: A TLC densitometric method for the quantification of amino acids from two species of Marchantia using HPTLC was established. This method is simple, precise, rapid, accurate and economic and can also be used for the estimation of amino acids content from the other bryophytes.