ABSTRACT: High-throughput Liquid chromatography–mass spectrometry method has been developed and validated for the quantiﬁcation of Linagliptin in human plasma using Linagliptin D4 as an internal standard (ISTD). Following solid phase extraction (SPE) in 96 well plate format, the analyte and ISTD were run on  phenyl hexyl, 100A 100 X 4.6mm, 2.6µusing an isocratic mobile phase consisting of 10mM Ammonium formate buffer (pH 6.5 ± 0.5): Methanol 15:85 v/v. The precursor and productions of the drugs were monitored on a triple quadrupole instrument operated in the positive ionization mode. The method was validated over a concentration range of 99.532-10045.049pg/mL with relative recoveries ranging from 69.9 to 77.1%. The inter batch precision (%CV) across three validation runs was≤ 2.9%.The Inter batch accuracy determined at four QC levels (LLOQ, LQC, MQC and HQC) was between 95.2–102.7%. According to the validated results, the proposed method was found to be specific, accurate, precise and high throughput method and could be used for the estimation of Linagliptin in human plasma and can be applied for the routine analysis.

INTRODUCTION: Linagliptin is an oral drug that reduces blood sugar (glucose) levels in patients with type 2 diabetes 1. Linagliptin is a member of a class of drugs that inhibit the enzyme, dipeptidyl peptidase-4 (DPP-4). Other members of this class include sitagliptin (Januvia), and saxagliptin (Onglyza).

Following a meal, incretin hormones such as glucagon-like peptide-1 (GLP-1) and glucose-dependent insulin tropic polypeptide (GIP) are released from the intestine, and their levels increase in the blood. GLP-1 and GIP reduce blood glucose by increasing the production and release of insulin from the pancreas.

Standard stock solutions of Linagliptin and internal standard (Linagliptin D4) were prepared by dissolving their accurately weighed amounts in methanol to give a ﬁnal concentration of 1 mg/mL. Individual working solutions of analyte were prepared by appropriate dilution of their stock solutions in 50% acetonitrile. All the solutions were stored in refrigerator at below 10ºC and were brought to room temperature before use. Working solution of internal standard (Linagliptin, 20 ng/mL) was prepared daily in 50% acetonitrile and was stored at room temperature.

Add 10 µL of internal standard to each tube except for blank plasma samples.

Load the samples onto the cartridge.

Evaporate the eluent under a gentle stream of nitrogen using a TurboVap 96, at a temperature of approximately 50°C.

Reconstitute the dried samples with 100 µL of mobile phase and vortex to mix.

Inject 10 mL of the sample onto the LC-MS/MS system.

A complete method validation of Linagliptin in human plasma was done following the USFDA and EMEA guidelines. Validation runs were performed on seven Separate days to evaluate selectivity, sensitivity, linearity, precision, accuracy, recovery, matrix effect, dilution integrity and stability. Each validation run was organized with a set of spiked standard samples, blank (with ISTD and without ISTD) and QC samples as per the validation parameter. Standard samples were analyzed at the beginning of the run and QC samples were distributed consistently throughout the validation runs.

Selectivity of the method toward endogenous and exogenous components of plasma was evaluated in 6 different human plasma lots. The blank plasma lots were extracted (without addition of ISTD), and injected for LC–MS/MS detection. Later selectivity in each lot was evaluated by comparing the blank peak responses against the mean peak response observed in plasma spiked LLOQ sample (n=6).

Intra batch (within day) and inter batch (between day) precision and accuracy was evaluated at five distinct concentrations (LLOQ, LQC, MQC, HQC and ULOQ). Precision and accuracy at each concentration level was evaluated in terms of %CV and relative error respectively. The extraction recovery of Linagliptin was determined at LQC, MQC and HQC levels. The relative recoveries were evaluated by comparing the peak areas of extracted samples (spiked before extraction) with that of un-extracted samples (blank extracts spiked after extraction).

The matrix effect was checked at low and high QC level using six different blank plasma lots (including one hemolytic and one lipemic lot). Matrix factor for  analyte and internal standard was calculated in  each lot  by  comparing the peak responses of  post extraction samples (blank extracts spiked after extraction) against the peak responses of  equivalent aqueous samples prepared in mobile phase. Internal standard normalized matrix factor in each lot was later evaluated by comparing the matrix factor of analyte and internal standard.

Stability of analytes in stock solutions and in working solutions was assessed at room temperature (short-term stability) and at1-10⁰C (long-term stability). All comparisons were made against freshly prepared stock solutions or working solutions. Before each analytical run, system suitability was evaluated by injecting six replicates of MQC sample to check the system precision and chromatography. System suitability was considered acceptable when the coefﬁcient of variation for response ratios was less than 4.0%.

For consistent and reliable estimation of analytes it was necessary to give equal importance for optimization of extraction procedure along with chromatographic and mass spectrometric conditions. Analyte and ISTD were tuned in positive polarity mode using electro spray ionization technique. The Q1 and the MSMS scans were made in infusion mode and further compound and gas parameters were optimized in ﬂow injection analysis. The [M+H] peaks were observed at m/z of 473.3 and 477.4 for Linagliptin and Linagliptin D4 respectively. Most abundant product ions were found at m/z of 420.2 and 424.2 for both Linagliptin and Linagliptin D4 (Fig.2 and 3) by applying sufﬁcient collision activated dissociation gas and collision energy. Increase in source temperature beyond 450ºC augmented the intensity. A 5% change in ion spray voltage and gas parameters did not affect the signal intensity. 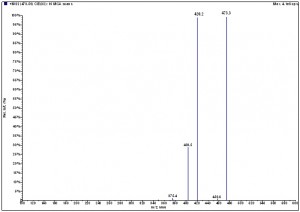 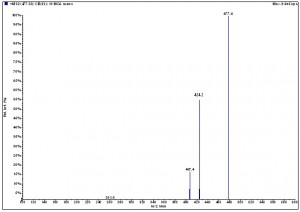 In the optimization of chromatographic conditions, isocratic mode was selected as no cross talk was observed between analytes and ISTD. To facilitate deprotonation no pH adjustments were made to the ammonium formate buffer. Use of methanol over acetonitrile in the mobile phase has shown signiﬁcant improvement in the signal intensities. Replacement of milli-Q water with 10 mM ammonium formate buffer in mobile phase gave good chromatographic peak shapes and further increase in the buffer concentration was resulted in loss of response. A ﬂow rate of 0.8 mL/min was used to minimize the run time.

In the selection of extraction method, protein precipitation and liquid–liquid extraction techniques were deliberately avoided to reduce base line noise and to get clean sample. Solid phase extraction initiated with individual HLB cartridges. Later on the method was shifted to 96 well plate format. Impact of different solutions and their concentration on recovery of analytes was monitored and the ﬁnal optimized conditions are depicted in Section 2.6.  During the optimization of chromatographic conditions and extraction procedure, more emphasis was given to improve the sensitivity and recovery. No signiﬁcant matrix effects were observed with the proposed chromatographic and extraction conditions.

Selectivity of the method in human K2 EDTA plasma was evaluated in six individual matrix lots along with one lipemic and one hemolytic lot.  Peak responses in blank lots were compared against the response of spiked LLOQ and negligible interference was observed at the retention time of analytes and ISTD. Fig.4–6 demonstrate the selectivity of the method with the chromatograms of blank plasma without ISTD, blank plasma with ISTD and LLOQ sample respectively. 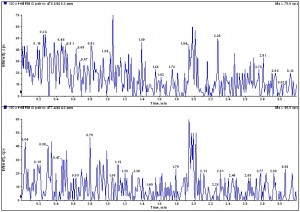 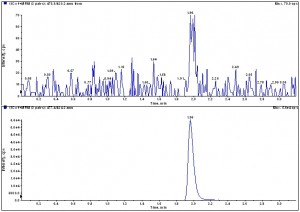 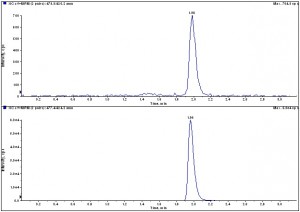 a   Mean of 3 replicates at each concentration

a   6 replicates at each concentration

b   18  replicates at each concentration

Co-eluting matrix components can suppress or enhance the ion- ization but might not result in a detectable response in matrix blanks due to selectivity of the MS detection, however they can affect the precision and accuracy of the assay. Therefore the potential for variable matrix related ion suppression was evaluated in six independent sources (containing one hemolytic and one lipemic lot) of human plasma, by calculating the IS normalized matrix factor. The mean IS normalized matrix factor was ranged between 0. 9287 and 1.0011 with a % CV of 4.2 to 11.1 as shown in Table 3.

Dilution integrity experiment was carried out at 3 times the ULOQ concentration. After 1/5, 1/10 and 1/20 dilution the mean back calculated concentration for dilution QC samples was within 85–115% of nominal value with a %CV of ≤5.2 as shown in Table 5.

a: Six replicates at each dilution factor

Stability evaluations were performed in both aqueous and matrix based samples. The stock solutions were stable for a period of 6 h at room temperature and for17 days at 1-10⁰C.  Stock dilutions in 50% acetonitrile were stable up to 6 h 45 min at room temperature. Stability evaluations in matrix were performed against freshly spiked calibration standards using freshly prepared quality control samples (comparison samples). The analyte was stable up to 6 h on bench top at room temperature and over 6 freeze-thaw cycles. The processed samples were stable up to 57 h in auto sampler at 10⁰C. Reinjection reproducibility is done for 60 h.  The long-term matrix stability was evaluated at both-20⁰C and -50⁰C over a period of 27 days. No signiﬁcant degradation of analytes was observed over the stability duration and conditions. The stability results presented in Table 6 were within85-115%.

CONCLUSION: A rapid, sensitive, high throughput and accurate liquid chromatography with electro spray ionization tandem mass spectrometry method was developed for determination of Linagliptin in human plasma with short chromatographic run time of 3.0 min. The method offers high selectivity with a LOQ of 99.532pg/mL, which is 0.1ng/mL. The extraction method utilizes a low sample volume of 100µL and shown consistent and reproducible recoveries for analyte and ISTD with minimum plasma interference and matrix effect. The validated method can be successfully used to a clinical and tox studies. Use of Linagliptin d4 as an ISTD will not compromise the accuracy of analytical results as this is the deuterated compound of analyte. The high throughput method can reduces overall processing time and allowing to process and analyze more than 180 samples in single time.