Nidhi Darmwal and B. K. Singh *

ABSTRACT: Organophosphorus (OP) nerve agents blocks acetylcholinesterase and do not allow the degradation of acetylcholine. Post-treatment of organophosphate poisoning involves the treatment with oxime reactivators as an antidote, which will dephosphorylate the phosphate bond between enzyme and nerve agent. Due to CNS permeability failure of these oximes, the introduction of low molecular non-oximes has become a challenging role for reactivation of inhibited acetylcholinesterase. In-silico high-throughput structure-based virtual screening and docking by using LOPAC database targeting CNS for inhibited acetylcholinesterase reactivation. For the identification of an active site of AChE enzyme and high throughput virtual screening, Inventus™ software was being used. ADME analysis for the selection of leads which can follow up Lipinski rule of 5 and CNS parameters for permeation. Further docking studies of selected lead candidates was done using Schrodinger software. By taking various CNS parameters into consideration hits were selected. For further refinement docking was performed, and the best lead obtained with glide XP docking score -11.656 Kcal/mol. The best lead candidates passed CNS permeation parameters range and have shown well binding with Acetylcholinesterase enzyme as that of standards.

AChE enzyme is being inhibited by various compounds among them organophosphate agents like nerve agents (sarin, VX, soman, etc.) and pesticides (methylparaoxon-MePOX, paraoxon-POX) were most harmful chemicals 1. Due to their toxicity in the mammalian system, these were being used as chemical warfare during chemical attacks for wider destruction 3.

These organophosphate groups form a covalent bond between the hydroxyl group of Ser203 residue and phosphorus atom of organophosphate which leads to irreversible inhibition at Ser203 residue 4. Due to irreversibility, continuous peripherally and centrally neuronal stimulation will take place. With this continuation, cholinergic crises may occur which later leads to human death 1. To eradicate such inhibition strong nucleophile such as pyridinium oxime needed as its quaternary nitrogen will dephosphorylate the cleave and reactivate the inhibited human AChE enzyme 5. Various standard drugs such as Atropine (muscarinic), Diazepam (anticonvulsive), 2-PAM, HI-6, Obidoxime (oximes) are being used for such intoxication 4.

One end of the dimeric oxime binds up with the catalytic active site which will participate in the reactivation and other binds to the peripheral inactive site for anticholinesterase activity 6. Due to the presence of permanent positive charge in standard oximes, oximes are not able to penetrate the blood-brain barrier (BBB) whereas nerve agent does penetrate and inhibit AChE. To resolve such problem non quaternary oximes (monoisonitroso-acetone or MINA, and diacetylmonooxime or DAM) were being introduced. These oximes do penetrate but failed in reactivation potency as of 2-PAM 7.

For the penetration across BBB as well as for reactivation purpose, small molecular weight reactivators might be suitable for OP intoxication by showing its maximum pharmacological effect 8. In this research paper, database from the Library of Pharmacologically Active Compounds (LOPAC) was selected, and most potent non oximes derivatives were being identified through high-throughput structure-based virtual screening targeting CNS  for inhibited acetylcholinesterase reactivation. As no such prior information is being published related to reactivation activity of these molecules by using structure-based virtual screening. For further refinement screened leads were being docked with 2WHP (PDB ID: 2WHP) and potential leads were being concluded by notifying docking scores and ADME parameters.

Selection of Enzyme/Protein: Three-dimensional target enzyme 2WHP (PDB ID: 2WHP) was downloaded from RCSB PDB. It is the crystal structure of acetylcholinesterase enzyme which is being phosphorylated by sarin and in complex with HI-6.

Energy and Clash Optimization: In-silico structure-based drug design involves the processing of protein which starts with the flagship module EnergyOpt followed by ClashOpt. Energy minimization participated in minimizing potential energy of protein molecules through steepest descent (SD) and conjugate gradient (CG) algorithm (Amber force field). Clash optimization removed all steric clashes as energy minimizer do not remove steric clashes completely which further may result in wrong docking results. The technique used in clash optimization is Monte Carlo, in which various numbers of cycles can be fixed and clashes can be removed during optimization 9.

Active Site Identification: Pocket detection not only play an important role in molecular recognition by discovering active site based on the geometry but also to identify new leads for the target. Hereby using Pocket Detector module most active site was being identified 9.

ADME Screening: False target selection in the early phase of clinical trials results in error possibilities and decrease in efficacy at the initial stage. To prevent such errors, calculation of pharmacokinetic parameters was being done by using QikProp in Schrodinger suite. Only drugs like candidates passing absorption, distribution, metabolism and excretion criteria will be taken into consideration 11.

Docking: For further clarification by using Schrodinger suite, retrieved hits were processed for docking. Docking procedure includes protein and ligand preparation in which removal of unwanted water molecules and cofactors, hits minimization, and generation of isomers was being done. Later using glide module docking can be carried out 12.

RESULTS AND DISCUSSION: In this study, with the use of structure-based drug design most active site of acetylcholinesterase enzyme was being detected which is required for binding, as active site residues are responsible for biological activity. POCKET was found to be one of the first grid-based geometric methods for the detection of active site 10. Maximum 10 active sites are being ranked, out of 10 best active sites was being chosen, or two active sites can be combined to create a bigger cavity. The active site detector identifies all cavities in a protein/enzyme and scores them well based on the physicochemical properties of functional groups covering the cavities in the protein/enzyme 9. Active site residues of acetylcholinesterase enzyme (PDB ID: 2WHP)were obtained, they are as follows ARG296, SER298, PHE297, LEU289, GLU285, TRP286, TYR124, ASP74, TRP72, PHE338, TYR337 and TYR341 at 5 Å. 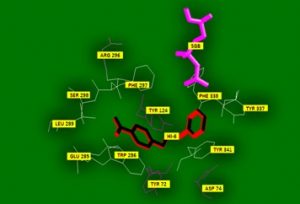 Since the limitation of ligand-based drug design is the similarity among top hits generated according to the active compound and least prediction of the activity of arbitrary test molecule 13. Therefore in structure-based, the screening methodology is basically based on structural and physicochemical parameters of small molecules nearby and functional groups covering the active sites of targeted protein/enzyme so that large database scanning can be done and most potent hits can be concluded 9. Here in LOPAC database out of 1227 compounds, top 50 were being screened, which were further processed for ADME analysis and docking studies. Furthermore, for easy intestinal permeability and absorption, only candidates with less than ten hydrogen bond acceptors, less than five hydrogen bond donors, a molecular weight below 500 Dalton and a calculated partition coefficient log P (C logP) less than five are considered. Pharmaceutically relevant properties for CNS permeation such as the partition coefficient (log P o/w) critically responsible for estimation of absorption of drugs within the body, (log Khsa) predict human serum albumin binding, (log BB) predict permeation through blood-brain barrier which is essential for the passage of drugs to the brain,(QPPMDCK)MDCK cells are well considered to be good mimic for the blood-brain barrier, predicted apparent MDCK cell permeability in nm/sec, (log Kp) predict skin permeability, (#N and O) predict number of nitrogen and oxygen atoms, (CNS)–2 (inactive) to +2 (active) scale, predicted central nervous system activity,(QPPCaco) Caco- 2 cells are for the gut-blood barrier, predicted apparent Caco-2 cell permeability in nm/sec. (PSA) Van der Waals surface area of polar nitrogen and oxygen atoms, (QPlogHERG) predicted IC50 value for the blockage of HERG K+ channels and percentage of human oral absorption were taken into consideration for the selection of the best possible candidates 14. Further, the best candidates were docked with optimized AChE enzyme which is being phosphorylated by the sarin nerve agent. Compounds which follow up Lipinski’s rule, as well as CNS parameters with higher binding affinity with an enzyme, were being finalized and further taken up for in-vitro studies.

Apparently, the interaction of ligand moieties by cation-π or π-π with AChE aromatic residues s(His, Phe, Trp, Tyr) plays an important role in the reactivation 16. The major role of the indole ring of Trp 286 displays a variety of interaction modes, including stacking, aromatic-aromatic and p-cation, which basically depends upon the nature of the ligand. Asp 74 and Trp 286 are also able to use several different interaction modes with ligands. In the binding of PAS ligands, Asp 74 seems to be unique in its ability to affect both the active site and the PAS 6.

Rule of Five: Number of violations of Lipinski’s rule of five. The rules are: mol_MW < 500, QPlogPo/w < 5, donorHB ≤ 5, and accptHB ≤ 10. Compounds that satisfy these rules are considered drug-like.

Rule of Three: Number of violations of Jorgensen’s rule of three. The three rules are: QPlogS > -5.7, QPPCaco > 22 nm/s, # Primary Metabolites < 7. Compounds with fewer (and preferably no) violations of these rules are more likely to be orally available 15.

TABLE 2: LEADS AND STANDARDS WITH THEIR DOCKING SCORES AND RELATED INFORMATION

CONCLUSION: In this study, with the use of structure-based drug design most active site of acetylcholinesterase enzyme was being detected, which is required for binding, as active site residues are responsible for biological activity. This study also facilitates in selecting the most potent drugs which can be targeted as reactivators as well as can cross BBB as they have shown binding affinity similar to standard oximes. Further, these leads can be taken for in-vitro studies.

ACKNOWLEDGEMENT: The authors are thankful to the department for providing CADD facilities on the campus and for giving such an opportunity.

CONFLICTS OF INTEREST: The authors declare no conflict of interests.