ABSTRACT: The present work deals with a novel synthesis of AgF/Ag2WO4 nanocomposite by co-precipitation method. The morphology and size of the synthesized AgF/Ag2WO4 nanocomposite were confirmed by Ultraviolet-Visible (UV-Vis) spectroscopy, Fourier Transform-Infrared (FT-IR) spectroscopy, Transition Electron Microscopy (TEM) and X-Ray Diffraction (XRD) analyses. The performance of the nanocomposite was successfully evaluated for Cr6+ detection in a gelatin capsule, which indicated that this convenient and sensitive material offered great promise for onsite environmental monitoring of Cr6+. Control experiments with the addition of over 10 other metal ions (Na+, K+, Mg2+, Fe2+, Hg2+, Ca2+, Cu2+, Ni2+, Mn2+, Zn2+) did not result in a distinct change in the colour or in the spectrum of the suspension which indicated that these ions did not interfere in the colorimetric determination of Cr6+ in gelatin capsule. The detection concentration of Cr (VI) ranged from 0.5 mg to 1.0 mg, and the detection limit was 2 nM.

INTRODUCTION: High soluble and toxic content with the carcinogenic effect of hexavalent chromium Cr6+ has been consistently found to be associated with an elevated incidence of respiratory cancers and other adverse health consequences. Chromium commonly exists in nature with two stable oxidation states, Cr3+ and Cr6+, whereas Cr6+ is highly water soluble and toxic, Cr (III) is much less soluble in water and less toxic to humans in the absence of complexing ligands 1-3. Many industries produce this carcinogenic pollutant including leather tanning, cement, textile, printers and stainless steel welding 4-7.

Among all the above-said methods, they are considered as a simple and low-cost, fast and portable and easy to carried out. Such a cost-effective monitoring tool for the detection of Cr6+ in gelatin capsule is of essential relevance, particularly in sensitive environments like pharmaceuticals, groundwater and industrial wastewater effluents. For the last few decades, pharmaceutical products have been growing rapidly in the global market. This development is highly expected to a greater extent because of the growth of a huge population and efficient health treatments 16-21. Generally, gelatin capsules are administered to heal. The chromium content has been checked in various medicines such as Cipmox 250, OMEGA B-Complex capsule, N-Cycline-250 and Doxylab. Among them, the chromium content is particularly more in N-Cycline-250 medicinal capsule. Many research literature has reported the evaluation of drug composition in pharmaceuticals, but no work has been carried out for the detection of a trace amount of chromium in empty gelatin capsules.

In the last few decades, the nanomaterials have been significant due to their various physical and chemical properties. Due to fascinating electronic, optical, magnetic, chemical and biological properties, the bimetallic nanomaterials exhibit new bifunctional or synergic effects 22-23. One of the transition metal compounds, tungstates possess a combination of covalent, ionic and metallic bonding and form an essential class of functional materials. Tungstates render important properties like ferroelectricity, conductivity, and photo-luminescence which have attracted significant attention among the scientific community due to its unique symmetry dependent and spontaneous polarization properties 24-26.

Among the tungstates, silver tungstate is emerging as a new material which shows high potential applications in enormous fields such as sanitary ceramics as an antibacterial agent, plasmonics, high-temperature tribological applications as solid-state lubricants, the catalyst for water splitting and dye degradation, electrochemical sensor, antibacterial property, luminescence host 27-35, etc. Various methods are involved during the preparation of tungsten oxides such as sol-gel method, chemical precipitation method and microwave irradiation method 36-38. Among them, chemical precipitation method plays a vital role due to its simple operation, less consumption of time and purity of the material compared to other methods. Ag and F is the best candidate as a dopant for Ag2WO4. AgF nanoparticles were formed due to the diffusion of Ag+ which reacted with the adsorbed F-. These nanoparticles are low cost, stable and nontoxic.

Experimental: All the reagents used in this work were analytical grade and used without further purification. All chemicals such as silver nitrate, sodium fluoride and sodium tungstate (Na2WO4.2H2O) were purchased from Sigma Aldrich, India. The commercial gelatin capsules were purchased from Apollo Pharmacy, Madurai, India. Deionized water (DI) was used throughout the work.

Preparation of AgF: 10 mmol AgNO3 and 2.5 mmol NaF were each separately dissolved in 20 ml of DI water. NaF solution was stirred constantly for 10 min and then added dropwise to AgNO3 solution with constant stirring for 3 h and there obtained a light grey colored suspension, which was centrifuged to remove the precipitate by washing twice with water and ethanol and dried in an oven at 333 K for 24 h.

Preparation of Ag2WO4: The Ag2WO4 was prepared by a precipitation process at room temperature. In a typical procedure, 0.5 mM of Na2WO4 was dissolved in 20 ml of DI water to form a clear solution, followed by a dropwise addition of 20 ml of AgNO3 aqueous solution (0.025 M). The solution turned white, indicating the formation of Ag2WO4. The precipitate formed was continuously stirred for 1 h and collected by centrifugation. After washing the as-prepared Ag2WO4 three times with DI water and ethanol, it was dried at 60 °C for 6 h.

Preparation of AgF/Ag2WO4 Nanocomposite: In an experimental procedure, 0.023 g of the as-prepared Ag2WO4 was added into 15 mL of DI water with the assistance of ultrasonication. 0.023g of prepared AgF was added into Ag2WO4 solution. After continuously stirred for 2 h at room temperature in the dark, the products were collected by centrifugation.

The obtained products were washed with DI water and ethanol three times each and dried at 60 °C for 6 h. Scheme 1 illustrates the formation of the AgF/Ag2WO4 nanocomposite and its sensing of Cr6+ in gelatin capsules. 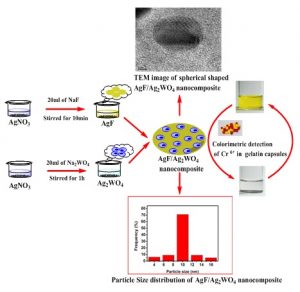 SCHEME 1: SYNTHESIS OF AgF/Ag2WO4 NANOCOMPOSITE AND ITS SENSING PROPERTIES OF Cr6+ IN GELATIN CAPSULE

Instrumentation: UV-visible spectra (Jasco V-560 model) of synthesized AgF/Ag2WO4 nano-composite was recorded between the range 200-800nm. The FT-IR spectral measurement was recorded using a KBr disc on a JASCO FT-IR 460 Plus spectrophotometer which was collected at a spatial resolution of 4 cm-1 in the transmission mode between 4000-400 cm-1. XRD analysis was carried out using an X-ray diffraction unit using Cu Ka radiation (λ = 1.5418Aº) on a JEOL JDX 8030 X-ray diffract meter. The size and morphology of synthesized AgF/Ag2WO4 nanocomposite were examined using transmission electron microscopy (HR-TEM, JEOL JEM 2100 model) instruments. An Energy Dispersive X-ray (EDX) spectrometer was used for elemental analysis which was attached to the transmission electron microscope. All experiments were carried out at room temperature.

UV-Vis Spectroscopy: The UV–vis spectra of the samples AgF, Ag2WO4 and AgF/Ag2WO4 are depicted in Fig. 1. The UV-vis absorption spectrum of AgF sample exhibits a peak at 427 nm with absorption in the visible region. The spectrum for Ag2WO4 sample has an absorption maximum at 420 nm. The peak at 422 nm confirms the formation of AgF/Ag2WO4 nanocomposite 39. 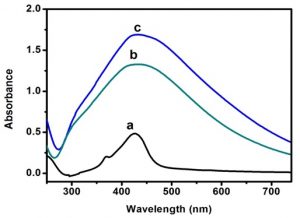 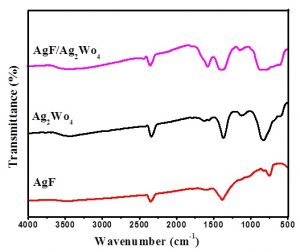 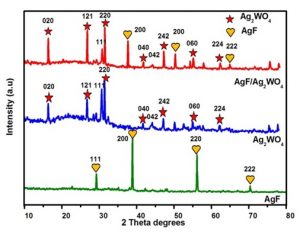 TEM: The surface morphology, size, and shape of the AgF/Ag2WO4 nanocomposite were characterized by HR-TEM images.

Fig. 6 represents the photographic image of AgF/Ag2WO4 nanocomposite with different heavy metal cations. There is no change in color observed when other heavy metal ions were added to the composite solution except for Cr6+ in gelatin capsule solution. 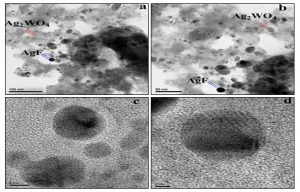 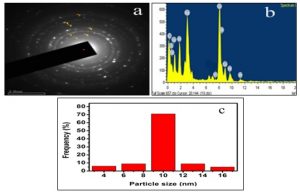 It shows that the change in the absorption peak is high selectivity. It is confirmed from the selectivity results that the proposed colorimetric sensor can detect specifically Cr6+ in a gelatin capsule. 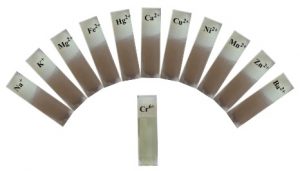 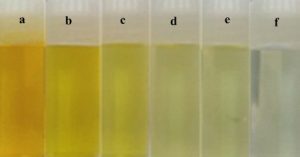 Real Sample Analysis: An application of AgF/Ag2WO4 as a colorimetric sensor in the analysis of gelatin capsule spiked with Cr6+ was made. The detected concentration of Cr6+ was 2 nM, close to that of the added Cr6+ (0.5 - 1.0 mg). The recovery was 84%. These results indicate that AgF/Ag2WO4 has good accuracy in monitoring Cr6+ in gelatin capsules.

FIG. 9: A) UV-VISIBLE ABSORPTION SPECTRA OF AgF/Ag2WO4 NANOCOMPOSITE AFTER THE ADDITION OF VARIOUS QUANTITIES (0.5 mg - 1.0 mg) of Cr 6+ IN GELATIN CAPSULE (A-F) B) PLOT OF ABSORBANCE INTENSITY VERSUS Cr 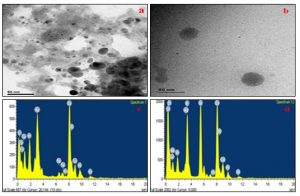 TABLE 1: COMPARISON OF COLORIMETRIC SENSORS PROPOSED FOR DETECTION OF Cr6+ IN THE LITERATURE

ACKNOWLEDGEMENT: The authors thank the management of Thiagarajar College for providing lab facilities.