K. Sereena, U. Prakash Kumar and A. B. Rema Shree*

Comparative pharmacognostic and phytochemical studies are the reliable source to identify the genuine raw drug from its adulterants. This paper deals with the characterization of the repute ayurvedic drug hallakam from its substitute/adulterants. Ayurvedic experts equated rhizomes of Kaempferia rotunda L. of Zingiberaceae as hallakam and in certain market samples Lagenandra toxicaria Dalz. is also sold as  hallakam. The distinguishing pharmacognostic and phytochemical characters evolved from the study help to detect the genuine and market adulterant of hallakam

INTRODUCTION: Hallakam is mentioned in Amarakosam 1 and given several synonyms like Sauganthika (aromatic), hallakam (which attracts bee), Raktasandhyakam (reddish), Kalhara (water plant) etc. The drug is stomachic, anti-inflammatory to wounds and bruices, improve complexion, cure burning sensation, mental disorders and insomnia 2. The rhizome is used for the preparation of many Ayurvedic formulations. From the reported synonyms, hallakam is equated with Kaempferia rotunda by Nadkarni 2, Chopra et al 3.

Moosad, (Amarakosam1) equated hallakam with chengazhinirkizhangu (K. rotunda) of Kerala physicians. However Rheede 4 equated this with Malankua (Zingiber zerumbet). Nicolson 5 also equated it with Zingiber zerumbet. According to Sivarajan and Balachandran6, hallakam is equated with K. rotunda and they reported that in practice L. toxicaria of Araceae is also used in Kerala. The controversies do exist in the case of hallakam by physicians.

Hence the present author made a thorough classical literature survey to identify the genuine plant. According to Dalhan a famous commentator of Sushrutasamhita 7, the synonym kalhara is one of the varieties of utpala (water lilly). Kalhara has been mentioned in another famous lexicon Bhavaprakashnighantu 8 written around 16 AD being included in the pushpavargha. The Ayurvedic expert Thakur Balwant Singh in his Glossary of vegetable drugs 9 has suggested that Sougandhika is considered to be a variety of Utpala.

So, Hallakam evidently denotes water lilly, even though there has been different opinion on this. Some of the Ayurvedic experts of Kerala have considered ‘Chengazhi’ (K. rotunda) and another water plant L. toxicaria as Hallakam. This paper deals with the characterization of the repute ayurvedic drug Hallakam from its substitute/adulterants. The distinguishing characters evolved from the study help to detect the genuine and substitute of Hallakam.

Anatomical studies: Plant materials for the present study were collected from Herb Garden, Arya Vaidya Sala, Kottakkal. The materials for anatomical study were fixed in Formalin: Acetic acid: Alcohol mixture (FAA). Histological and histochemical staining was carried out according to Johansen 10.

Photomicrographs were taken using Canon G3 camera attached to Zeiss microscope. Polarization microscopic studies were highly useful to locate and distinguish the types of crystals and minerals present in the useful parts. The characters were observed under Motic BA 400 polarization microscope. Fluorescent microscopic studies of the useful parts were done with the help of UV light. Observations were done under Leica DM 1000 LED fluorescent microscope and photographs were taken with the help of a digital camera. For examining the cell structure in powder form, material were powdered and sieved and mounted under glycerol and saffranin to study the nature and identification of particles.

Phytochemical Studies: The dried root tuber and rhizomes were powdered and 5 g each K. rotunda and L. toxicaria were kept in 100 ml each of petroleum ether for overnight. The extract was then filtered and the solvent was evaporated under reduced pressure in a rotary evaporator. The residue was then dissolved in 10 ml of petroleum ether and subjected to TLC and GCMS profiling. Essential oils were distilled using Clevenger apparatus to perform GCMS.

GCMS analysis: GCMS is one of the widely used methods for analysis of volatile compounds present in herbal drugs Gas chromatography-mass spectrometry was carried out on an Agilent GC-MS 6850 under electron impact ionization (70 eV). The interface temperature was 230°C, and the MS scan range was 50-800 atomic mass units (AMU). The separation of constituents was done on HP5 - MS capillary column (30 m x 0.25 mm internal diameter). The carrier gas used was helium at a flow rate of 1 ml/min. The oven temperature was 60°C to 250°C with a constant increase of 5°C. The injection was performed in split mode (1:100) at 250°C.

Morphological characters: Morphological characters of these two species are entirely different. In K. rotunda rhizome is very fleshy and having 3 - 3.5 cm in length and 1.5 - 1.75 cm in diameter. Each tuber has the shape of club with a bulged lower portion and a stalk like cylindrical upper portion. But in the market, it is obtaining in dried transversely cut pieces (Fig. 1 A-C). 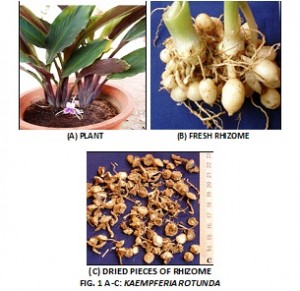 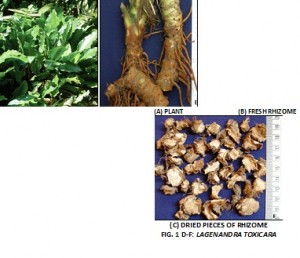 From the thorough classical literature survey to identify the genuine hallakam using the synonyms, it is aggreable in the case of K. rotunda ie., one of the characteristic feature of hallakam is souganthika. It is applicable only to K. rotunda and no aromatic smell is observed in L. toxicaria.

Anatomical characters: Preliminary pharmacognostic studies of K. rotunda, was carried out by Nambiar et al 12. There are no reports regarding the comparative pharmacognostic characterization of K. rotunda and L. toxicaria. From the present study both the rhizomes showed significant anatomical characters. Both the rhizomes are almost circular in outline (Fig. 2 A & F). Periderm is well developed with broad cork in K. rotunda when compared to that of L. toxicaria (Fig. 2 B & G). Though K. rotunda belongs to monocot a correct demarcation between the outer and inner zone by endodermis like layer is present and it is termed as endodermoidal layer. 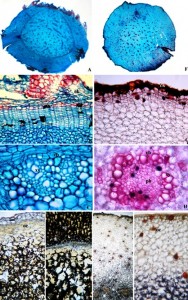 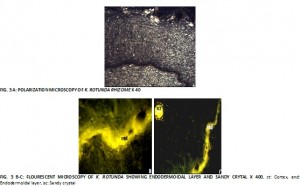 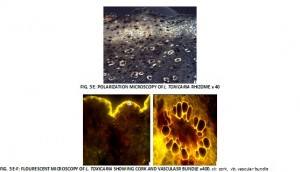 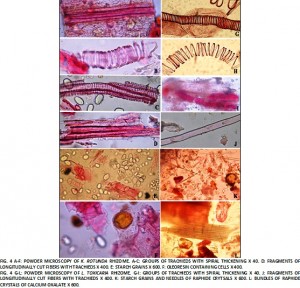 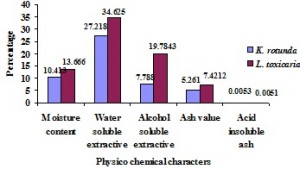 From the GCMS analysis carried out by the author using petroleum ether extracts by cold maceration of dried and powdered samples of K. rotunda and L. toxicaria showed entirely different compounds in their essential oil. The major compounds identified in K. rotunda are n-dodecane, hexadecane, stearaldehyde, dodecanoic acid, kauren-ol whereas in L. toxicaria, we were able to identify a single compound 3-eicosyne from their GCMS analysis (Table 3 & Fig. 6 & 7). Essential oils were distilled using Clevenger apparatus to perform GCMS, and found that K. rotunda having fairly good amount of oil. But in the case of L. toxicaria the quantity was very less to perform GCMS analysis. Hence, GCMS performed only in volatile oil of K. rotunda. In the present study, we could able to quantify and identify 13 compounds from the essential oil of fresh sample of K. rotunda using GCMS. Among the compounds bornyl acetate and benzyl benzoate was found to be major constituents in the oil (Table 4 & Fig. 8). 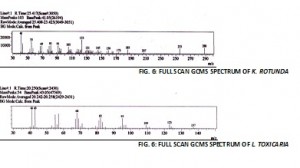 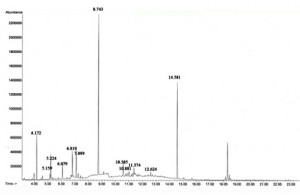 From the available literature and present study shows that L. toxicaria don’t have any similar therapeutic activity mentioned for hallakam in classical texts and moreover it is reported to be a poisonous plant 17, though it is having similarities with the synonym i.e., Water lilly (kalhara) and hallakam (powerful odour which attracts bee) etc, it is not the genuine source plant of hallakam.

CONCLUSION: From the present study the anatomical and histochemical characters observed between these two plants shows differences in their nature of cells and cell inclusions. Phytochemical studies between these two plants shows much difference in their chemical constituents. So, it is a very helpful tool to distinguish the genuine dried raw drug from the adulterants and it is concluded that L. toxicaria is a clear case of adulterant.

K. Sereena, U. Prakash Kumar and A. B. Rema Shree*