INTRODUCTION: It is well-known that the demand for herbal drug treatment of various ailments is increasing and plant drugs from the ayurvedic system are being explored more in India and globally. The leaves of the plant are the main source of drug preparation. Leaf extract of Adhatoda vasica was also reported for the protective role in the spleen of Swiss albino mice exposed to 6 Gy γ-radiation 1. The radioprotective efficacy of a hydroalcoholic extract of Pterocarpus santalinus was reported in Balb-C mice exposed to γ-radiation 2. Extracts of various plants have been reported beneficial for free radical-mediated conditions in humans, as they contain compounds with antioxidant activity that can prevent damage induced by reactive oxygen species.

Many more medicinally useful plants are present in the Himalayas. Among them is Adhatoda vasica used in the present study; it belongs to the family Acanthaceae and is found throughout India up to 1300 m. The plant has been used in the indigenous system of medicine worldwide as an herbal remedy for treating cold, cough, chronic bronchitis, asthma, sedative expectorant, rheumatism, and rheumatic painful inflammatory swellings. Plant extracts contain phytochemical constituents for miscellaneous medicinal activities, which are bioactive in nature 3.

Polyphenols from medicinal plants, such as were found to decrease irradiation-induced oxidative stress in normal lymphocytes using ROS mechanisms, acting as a radiation modifier for normal cells 4. Medicinal plants have played an important role in pharmacology and medicine for many years.

Today, it is estimated that about 80% of the world relies on botanical preparations as medicine to meet their health needs 5. Plants provide complicated, mixed, and distinct non-nutrient elements which act as the main basis of drug discovery 6.

Radio protectors and radiomitigators are important modulators, and their delivery occurs simultaneously with the radiation administration to reduce normal tissue toxicity 7. Exposure to whole-body irradiation may induce cancer by a number of different mechanisms.

Free radicals have been directly associated with biological effects of ionizing radiation such as lethality, physiological disorders, mutation, and carcinogenesis. Life on Earth has evolved through continuous exposure to ionizing radiation, whose mode of action at the bio-molecular level is unique among all known mutagens and carcinogenic agents 8.

The testes are situated outside the abdominal cavity within a pouch called the scrotum. The scrotum helps maintain the testes' low temperature necessary for spermatogenesis. Testes are the main reproductive organ in males and are responsible for sperm production. Ionizing radiation is found to produce marked effects on testes in terms of lethality and impaired spermatogenesis.

Source of Irradiation: About 6-8 weeks old male mice were irradiated in “Gamma chamber-900” (BARC) with an automatic timer having cobalt- 60 as the source of gamma rays.

Experimental design: Normal healthy animals showing no sign of morbidity were divided into the following groups:

(i) Mice in the first group serve as control (ii) Mice of the second group were administered Adhatoda vasica extract (900mg/kg body wt.) for 15 days.

(iii) Mice of the third group were exposed to gamma radiation (6Gy).

(iv) Mice of the fourth group were administered Adhatoda vasica extract (900mg/kg body wt.) for 15 days and then exposed to gamma radiation (6Gy).

RESULT AND DISCUSSION: The results obtained for histopathological studies on testes of mice were presented in Fig. 1-10 and discussed as follows. 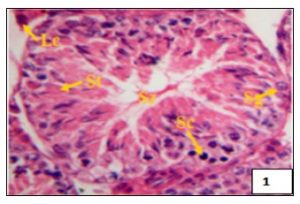 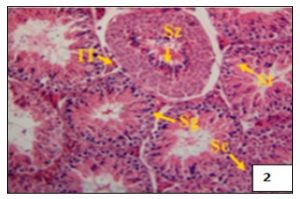 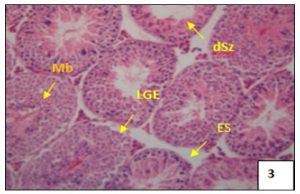 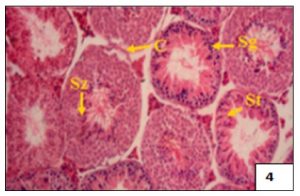 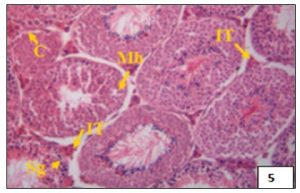 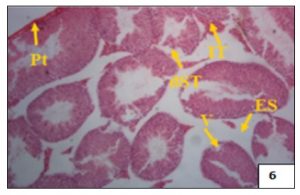 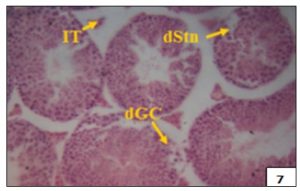 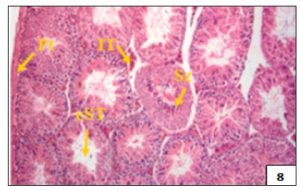 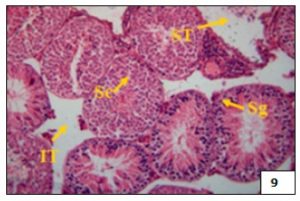 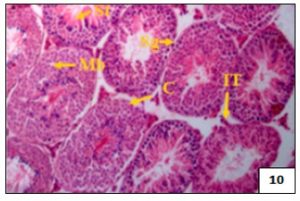 Control Mice Testes: Microscopic examination of the control testes of mice had normal structure and was completely enveloped by a thick capsule, tunica albuginea composed mainly of dense collagenous fibrous connective tissue. The structural components of the testes are the seminiferous tubules and interstitial tissues. The seminiferous tubules have two types of cells, the Sertoli cells, resting on thin basement membrane and the spermatogenic cells. These cells are mainly layered, namely the spermatogonia, primary and secondary spermatocytes, spermatids and spermatozoa Fig. 1. Sperms may appear in some tubules with condensed nuclei with tails directed towards lumen. There were very few gaps between the seminiferous tubules and the successive stages of transformations of spermatogonia into spermatozoa and were easily visible in control mice testes. The interstitial tissue appeared as a granular acidophilic ground substance containing Leydig cells and blood vessels.

Adhatoda vasica Extract Treated Mice Testes: The mice treated with Adhatoda vasica extract showed no significant change in the architecture of testes. The seminiferous tubules showed all stages of normal germ cells with active spermatogenesis histological features of testes. The majority of tubules were active. The normal interstitial tissues spaces were observed.

At 5 days stage, some empty seminiferous tubules were seen, and some elongated tubules were also noticed Fig. 2. The seminiferous epithelium exhibited the presence of vacuoles. Compact arrangement of cells was also visible. Round spermatid nuclei had condensed chromatin along with the nuclear envelope. The usual feature of successive stages of transformations of spermatogonia into spermatozoa was seen. At 15 days stage, some seminiferous tubules appeared devoid of spermatozoa and loosening of germinal epithelium Fig. 3. The seminiferous tubules exhibited peritoneum membrane at 30 days stage of extract treatment Fig. 4. The different germ cells, especially mature sperms, were rarely seen, and sertoli cells disappeared in most tubules.

Irradiated Mice Testes: Irradiated mice testes resulted in severe effects on the histoarchitecture of testes. The majority of the tubules were inactive and demonstrated an overall absence of spermatogenesis and such seminiferous tubules were lined by only a single or double layer of cells. At one day stage, irradiated mice testes exhibited micro balloons-like formation. Seminiferous tubules appeared damaged due to the loosening of germinal epithelium and were no more rounded Fig. 5. There was a drastic depletion of the spermatogonial population with necrotic and pyknotic nuclei compared with control mice.

At 5 days stage, seminiferous tubules showed vacuole formation, and some tubules degenerated in the sections. The spermatogonia were also seen enlarged in size. The interstitial tissue spaces were loosening their boundaries. Tubular epithelium appeared extremely pycnotic, and no signs of spermatogenic activity were seen, which showed a complete spermatogenic arrest Fig. 6. The germinal epithelium was highly disorganized with shrinkage of tubules and cytoplasmic vacuolization. Sertoli cells and leydig cells showed shrinkage in their size. In irradiated mice testes, there was a significant decrease in the number of spermatogonia. A similar decrease was also found in the number of primary spermatocytes, secondary spermatocyte and spermatid. At 15 days stage, testes demonstrated degenerated sertoli cell nuclei and degenerated germ cells. There was hardly any distinction between spermatogonia, spermatocytes, or spermatid. The enlarged interstitial tissue was also noticed. Tubular epithelium became loose and began to detach from the basement membrane Fig. 7. Many workers have reported a reduction in testicular weight due to spermatogenic arrest on the administration of drugs, radiations, chemicals, and pesticides 14. The results of the present study conform with these findings, showing a significant reduction in the weight of testes and a significant increase in the number of sperm abnormalities after radiation exposure.

Adhatoda vasica extract plus Irradiated Testes: The mice treated with Adhatoda vasica extract and then exposed to 6 Gy gamma radiation dose showed lesser degree of disorganization in testes architecture. The number of germ cells increased by day 30, histology of testes revealed near-normal histoarchitecture except for some cytoplasmic vacuolization and lumen with full of sperms. At 5 day stage, Adhatoda vasica extract-treated plus irradiated mice testes exhibited some micro balloons like structure and some debris in seminiferous tubules. However, the cellular content of the tubules was compact, multilayered, and arranged in a more or less radial configuration in most tubules showing signs of normal spermatogenesis Fig. 8. The interstitial tissue spaces were seen to increase. At 15 day stage, lifting of mass of seminiferous tubules and enlarged interstitial tissues spaces were noticed Fig. 9. The spermatozoa was observed aggregated in the lumen of seminiferous tubules. The chromatin material of spermatogonial nuclei appeared condensed and continuous sloughing of germ cells. The spermatogonia had dense globules of chromatin with a nuclear membrane. The germinal epithelium was broken down, and tubular diameters were abnormal. The basement membrane was not always visible, and the lumen of the seminiferous tubules was devoid of spermatozoa and filled with fibrous material.

At 30 days stage, normal spermatogonia and sertoli cells were observed in the sections. The cellular contents of most of the tubules were compact and a sign of normal spermatogenic activity. There was a significant increase in spermatozoa in the lumen of seminiferous tubule Fig. 10. Infertility has been a major medical and social problem. Adhatoda vasica extract pre-treatment rendered a high degree of recovery in spermatogenic cells, and almost a normal testicular architecture was re-established by the end of the experiment, but some pathological lesions like adhesion of tubules, mild cytoplasmic vacuolation, and less number of mature spermatozoa still persisted in the lumen of some tubules. A similar observation has also been reported while using Panax ginseng 15, Podophyllum hexandrum 16 and Mentha piperita 17 as radio-protector for the modulation of testicular injuries after irradiation. The protective ability of the phytochemicals against radiation-induced male reproductive abnormalities may offer new insight into the modification of testicular germ cell radiosensitivity, which may have implications in amelioration of testicular injuries.

CONCLUSION: The oral administration of Adhatoda vasica in the present work has shown that it provides protection against irradiation. Thus Adhatoda vasica may safely be used as a cancer chemopreventive agent, which may help enhance the cell's detoxification reaction and thus may be effective as a blocking agent against chemically induced carcinogenesis.

ACKNOWLEDGEMENT: I sincerely thank the gracious assistance provided by the chemistry department HPU Shimla for permission to use the “Gamma chamber-900” facilities to carry out this research work.