ABSTRACT: Malathion is a widely used organophosphorous pesticide that a large number of populations are undesirably exposing themselves to severe health risk due to taking up the contaminated foods, water and vegetables containing malathion. The present study was carried out through histopathologic test to evaluate the extent of damage caused by malathion in the liver and kidney tissues of mice. Twenty five adult female albino mice were used and dispense mainly into two groups as control group and treatment group. The mice of control group were feed with poultry food without any ingredient of malathion. Each of the treatment groups (group1, group 2, group 3 and group 4, containing five animals in each group) were supplied everyday with the same type of food containing the following amounts of malathion as 65mg, 13mg, 2.6mg, and 0.52mg per 50gm (10gm food/mouse) of food, respectively. After fifteen days the animals of both groups were sacrificed and the organs of sacrificed animal were subjected to histopathological examination and then visualized under light microscope. Results demonstrated various histopathological alterations such as enlargement of the sinusoids and vacuole formations in hepatocytes and central vain, congestion of blood vessels of hepatic tissue, hemorrhage and necrosis in hepatic tissue and swelling appearances, highly degeneration and shrinkage of glomeruli, Bowman's capsules and related tubules structure, edema of renal tubules and rising of urinary space in renal tissue compared with their control. Therefore, we strongly recommend here for the ban of malathion for used as pesticide

INTRODUCTION: Malathion is one of the most extensively used organophosphorous pesticide throughout the world to protect crops against different types of pest and to get more yield. It is highly effective, rapid in healing action, accactable to most conditions and relatively cost-effective. After first registered for use in the United States in 1956, it has been abundantly used in agriculture, grain storage, garden, ornamental plants, greenhouse and forests.

This hazardous chemical is applied practically via ground and aerial sprays, aerosols, foggers, baits, paints, pet collars, animal dips, animal dust bags, and cattle feed blocks. It is exposed in our environment through diverse ways such as inhalation, skin contact and through ingestion 1. Annual predictable use of malathion throughout the world range from 10 to 15 million pounds of active ingredients 2. Besides of its deliberate use to control pest and insect, occasionally showing moderate to highly toxicity to wide variety of non target organism like as bird and water organism, including fish 3 even humans health 5. Malathion is basically a nerve toxin, worked by inhibiting the action of an enzyme called acetylcholinesterase (AChE) at the synaptic junction 6, which is used to break down another chemical acetylcholine that plays a crucial role in the transmission of impulses from one nerve cell to another. Due to binding of AChE with malathion, AChE cannot break down acetylcholine, which consequently accumulates in nerve cells and causing rapid twitching, incoordination, paralysis and death 7, 8.

Inhibition of liver acetylcholinesterase (AChE) activity is normally regarded as a practical parameter of poisoning by organophophorous pesticides. Malathion’s toxicity is enhanced by its metabolites and contaminates. It is readily oxidized into its metabolites malaoxon in mammals, insects, and plants, which is the major source of malathion's toxicity and is 40 times more toxic than malathion 9, 10. There are various abnormalities related with malathion toxicity such as vision loss, kidney damage 11 and lung damage 12 and myriad negative health effects. It has been connected to child leukemia, aplastic anemia and adult leukopenia 13.

Malathion has also been related with mutagenicity, carcinogenicity and DNA abnormalities 19, 20. Several studies showed that malathion provoke a range of physiological, biochemical, immunological, and histological alteration in experimental animals 21, 22. Due to its massive use as pesticide in agricultural sector and causing serious environmental trouble as well as harmful effect on non target organism including human, the policy maker of several countries are searching to apply biological and other nonpolluting methods for combating with pest. In Bangladesh, the activity of Pesticide Incident Monitoring System (PIMS) is not enough to control of marketing pesticide containing food stuff and general public undesirably consume and subjected to serious health threat. Therefore, there is an utmost need to find out safety dose of malathion that effectively destroy pest and insect, on other side is risk free to human beings and other non target organism.

Animals: Twenty five matured female albino mice weighing around 23-27gm (80-90 days) were collected from the Department of Pharmacy of the University of Jahangirnagar, Dhaka, Bangladesh. All mice were handled in accordance with the typical guide for care and use of laboratory animals (under the license of Institutional animal, medical ethics, bio-safety and bio-security committee (IAMEBBC) for experimentations on animal, human, microbes and living natural sources . No. 33/320/IAMEBBC/IBSC).

Chemical: Malathion (57%) was purchased from local super market of Rajshahi by the trade name of Ecomala produced by Opsonin pharma. The concentration of malathion was calculated from the percentage of active ingredient of commercial formulation of malathion.

Control group: A total of five mice were feed with poultry food (10gm/mouse) without any ingredient of malathion.

Group 1: Experimental animals were orally given malathion at a dose of 1300mg/kg body weight for a period of fifteen days, which was the LD50 dose in case of female mouse.

Group 2: Experimental animals were orally given malathion at a dose of 260mg/kg body weight for a period of fifteen days, which was the five times dilution of LD50 dose.

Group 3: Experimental animals were orally given malathion at a dose level of 52mg/kg body weight (five dilution of dose 2) for a period of fifteen days.

Group 4: The experimental animals were orally given malathion at a dose of 10.5mg/kg body weight (five dilution of dose 3) for a period of fifteen days.

Histological study: After completion of treatment period, the animals were anesthetized using chloroform and sacrificed by cervical dislocation. Liver and kidney was collected carefully from the mice using standard procedure. Collected organs were washed thoroughly with 0.9% normal saline to remove any race of blood. Fat tissues adhered to the organs were also removed carefully and afterwards organs were sliced into small tissue pieces using a surgical scalpel for allowing easy penetration of the chemicals inside the tissue.

The dissected tissue was treated with Bouin’s fluid (fixative) for -16-18 hour and subsequently washed under running tap water for one hour until complete removal of most of the Bouin’s fluid from the tissues. Followed by washing, dehydration of the tissues was conducted by immersing the tissue in a series of gradually increasing concentrations of alcohol (50%, 70%, 80%, 95% and absolute alcohol) and embedded into paraffin wax for making blocks.

The block was to be trimmed by removing of wax from the surface of block to expose the tissue. Sectioning of the tissue was performed by using a microtome (The microtome machine was sold from Tokyo, Japan by the trade name of SHIBUYA produced by optical. Co LTD). The microtome was pre-set to cut the tissue as thicknesses around 6 µm.

Blocks Small ribbons of tissue sections were placed on microscopic slide with help of warm distil water containing few drops of Mayer’s albumen and deparaffinized with xylene solution. Haematoxylene and eosin yellow solution was used to stain the tissue for preparing permanent slide. Histopathological changes were observed under 20x of a light microscope (The microscope was purchased from Italy by the trade name optika) and snaps were taken.

The animals of treated group were received food containing different concentration of malathion solution based on the number of group. First two days mice received tinny food probably due to the bad odor of malathion in the food. Nevertheless, from third day they normally took food. But their appearance clearly indicated the toxicological effect of malathion. They looked like as cadaverous and dull. However, ending treatment period they were sacrificed and prepared of histological slid from their two organ (liver and kidney).The slide clearly indicated the injurious effect of malathion on both organs.

In treatment group 4, there were no significant changes in renal tissues other than just mild blood hemorrhage and vaculation in the intertubular spaces (2E). 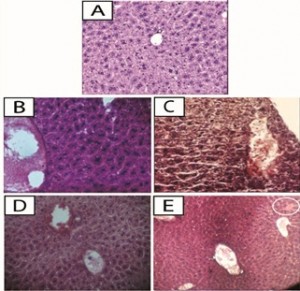 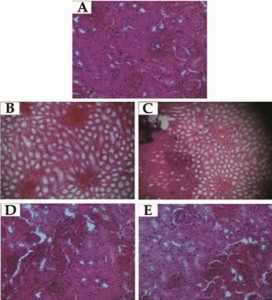 Results from histological investigation are in accord with diverse earlier studies which indicated that the introduction to malathion and other pesticides led to provoke intensive physiological and biochemical turbulence in experimental animals, buffalo calves 25, goats 26, mice 27, cockerels 28, poultry 29, rabbits 30, and rats 31, 32. According to Tos-Luty et al. 33 malathion intoxication led to injurious effects on the organization of the liver and kidney with the persistence of thin subcapsular infiltrations, diffused parenchymatous degeneration of single hepatocytes, and the presence of tinny foci constructed of plasmatic cells, and histiocytes situated between hepatic plates.

The submicroscopic organization of hepatocytes showed lucid parts of cytoplasm carrying the residues of cell organelle and lipid vacuoles. Mitochondria were frequently distended, indicating a transparence of the matrix and obliteration of crests. Furthermore, they indicated that the histopathological alteration in the kidneys occurred in all animals. These alterations demonstrated parenchymatous deterioration of the cells of renal tubules and hyperemia of the cortical area of the kidney, particularly of renal glomeruli, with infiltrations. A number of experiments indicated that malathion caused hepatotoxicity 34, testicular toxicity 35, hematotoxicity 36, 37, genotoxicity 38 and nephrotoxicity 37.

However, diverse works showed that malathion as well as other pesticides provoked histopathological alterations of liver and kidney in different rodent animals 39, 40. In conclusion, the results of present study indicated that, even oral LD50 value of malathion for male mice is 1300mg/kg, however, it can cause severe damage to hepatic and renal organization when exposure to such doses that much lower than LD50 value of malathion. The current experiment mainly focused on the fact that, the duration (15 days) of exposure of malathion to experimental animal is less than many of other studies 37, but this short term exposure is enough to cause extent damage to hepatic and renal structure. Further investigations are needed to carry out for the discovery of probable therapeutic agent which completely detoxifies this toxic substance and searching out probable pesticide which is safe to use. Finally, the current work showed that the short term exposure and low doses besides high dose exposure of malathion is injurious to mice in approximately the same way to chronic treatment.

CONCLUSION: The present experiment indicated that the use of malathion as pesticide is injurious to health and as an important histological marker for pesticide toxicity. Therefore strict law need to be formulated to stop such oblivious use of malathion during applying in the field and it ought to be reflected in our health policy. In addition to the novel regulation, the law enforcement agencies of Bangladesh ought to be more watchful for appropriate implementation of the regulation. On the other side, Scientists have to explore and develop non pollutant and biological method to manage pest as an option of chemical insecticide. Eventually awareness should be spread among the general public about the continuous utilization of pesticide and their deleterious effect on public health.

ACKNOWLEDGEMENT: I would like to acknowledge ministry of science and technology of Bangladesh for financial support.