INTRODUCTION: It is estimated that there are about 250, 000 to 5,00,000 plant species on earth 1 and many of which have been used with proven efficiency. The renewed interest in the use of medicinal plants has been attributed to its abundance, cheapness and ready accessibility by the local populace; in addition to increased availability of information on scientific studies documented on the safety and efficacy of herbal medicine for health care 2-3.

The ellipsoid fruit is bright yellow-orange in color, when mature is green, consisting of juicy bland tasting tissue 4.

The non-bitter variety of C. metuliferus have been found to be less toxic and cultivated on large scale for consumption by the local populace 5-6. It also serves as a vermifuge 7. This plant has been claimed by the people of Plateau State, Nigeria to be effective against many ailments including Diabetes mellitus, hypertension, ulcer, malaria, and viral infections.

In an attempt of getting rid of harmful toxins or unwanted components from ingested herbal products, the organs/tissues responsible for such functions are usually affected leading to tissue/organ damage. The organs that are usually affected include liver, spleen, heart, kidney, pancreas among others.

The study was designed to investigate the effect of C.metuliferus on the tissues integrity of these organs.

Plant collection and identification: The ripened fruit was harvested from the bushes around Rukuba Barrack road and Babale village of Jos North, Nigeria, in September, 2007. The plant was authenticated by D. L. Wonnang, Department of Botany, University of Jos, Nigeria.

Preparation of C. metuliferus: The ripened fruit of C. metuliferus was collected and transversely cut using blade and the mesocarp contents carefully scooped out from the pericarp with the aid of a spatula. The fleshy content was blended using electric blender and the fluidy product of blending was passed through a sieve size of 0.25mm to separate the seeds from the juicy contents. The smooth filtrate was evenly spread on an aluminium tray and dries in a drying cabinet, at about 58oC until the liquid content had been evaporated. The resultant product was air dried for several hours and then pounded to powder using mortar and pestle after which it was stored in an airtight container at room temperature prior to use.

70g of the dried powder was subjected to exhaustive Soxhlet’s extraction in 350ml of absolute ethanol at 780C until an oil-like crude extract of C. metuliferus was left. The extract was then stored in a refrigerator until required for use.

Animals: Wister albino male adult rats were obtained from the animal house of the Department of Pharmacology, University of Jos, Nigeria. The animals were maintained on standard animal pellets (Pfizer, Nigeria) and water ad libitum throughout the 28 days period of the studies.

Phytochemical screening: Phytochemical analyses of both the pulp powder and the oil-like ethanolic extract were carried out to identify the presence or absence of secondary metabolites using standard methods 8-9.

Effect of C. metuliferus on tissues of rats: Wister male adult rats were randomly distributed into three groups of four animals each. The first group served as control and received distilled water equivalent to 1ml/kg through the oral route.

Animals in the second and third groups received 500 and 1000mg/kg body weight of C. metuliferus pulp powder dissolved in distilled water respectively. All the rats in this evaluation received their respective doses daily for 28 days. At the end of 28 days, the rats were sacrificed by chloroform anaesthesia, and the liver, spleen, heart, kidney, and pancreas, were removed and preserved in 10% (v/v) formalin for microscopic studies. Tissues from the organs were cut into 5 microns thick in paraffin wax, after which they were deparaffinised and stained with mayer hematoxylin and eosin stains for light microscopic assessment of tissue morphology.

RESULTS: Results of phytochemical test of the C. metuliferus pulp powdered and extract showed the presence of alkaloids, flavonoids, cardiac glycosides, steroids, and carbohydrates; Saponins and Tannins were in negligible quantity, while anthraquinone was not detected (Table 1). No increase lethality, changes in the behavior of the animals were observed, nor was morphological changes in the internal organs in animals treated with 500mg/kg dose point of C. metuliferus observed. There was severe ballooning degeneration of the liver at 1000mg/kg with tissue necrosis in some foci. The low and high doses showed no remarkable changes in the spleen. 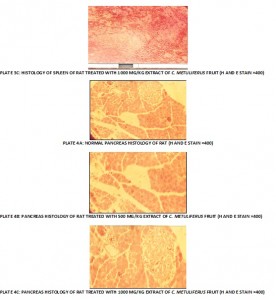 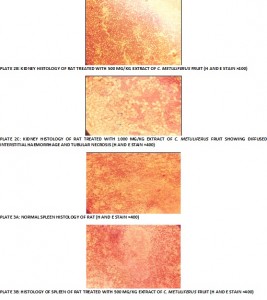 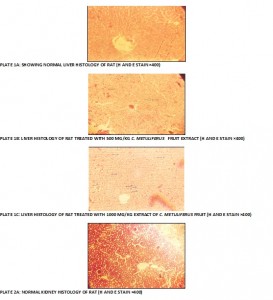 DISCUSSION: C. metuliferus has several groups of secondary metabolites that may account for much of the plant’s actions and uses. Alkaloids have been documented to have antiviral and antileukemic activities 10-11. The flavonoids are known for their anti-allergic, ant-inflammatory, antimicrobial and anti-cancer properties 12. Apart from the anti-inflammatory roles of tannins and sterols 13, tannins have been found to inhibit HIV replication 14-15. Tannins have also been reported to form complex with proteins and activate microbial adhesion enzymes, cell envelope, transport proteins, 16. Studies have also illustrated the beneficial effects of saponins on the blood cholesterol levels, cancer, bone health, antioxidant and stimulation of the immune system 17.

1000mg/kg dose point of C. metuliferus fruit extract significantly (P<0.05) increased the levels of serum AST and ALT 18. High levels of these enzymes therefore indicate liver damage such as that due to disorders that cause the death of numerous hepatic cells like viral hepatic and toxicity from an overdose of acetaminophen (paracetamol). The histological study of rats treated with 1000mg/kg dose point of C. metuliferus extract showed focal hepatocellular necrosis similar to that induced by paracetamol; also, the fatty liver observed in the rats administered 1000mg/kg was similar to what is obtained in alcoholic cirrhosis 19. On the other hand, dose of 500mg/kg of C. metuliferus fruit extract showed no significant alterations in the liver tissues compared to the control.

Kidney histology of rats treated with 1000mg/kg of C. metuliferus fruits extract showed some features of renal epithelial cells damages compared to the control. It has been documented that many herbal preparations have exhibited similar nephrotoxic effects in experimental animals 20-21. 500mg/kg dose point of C. metuliferus fruit extract showed no significant damage on the renal tissues compared to the control.

The tissues of the spleen and pancreas of rats treated with both doses of 500mg/kg and 1000mg/kg of C. metuliferus fruit extract appeared normal. There were no evidences of tissue necrosis and no remarkable changes were observed compared to the control.

CONCLUSION: This study showed that C. metuliferus fruit has some secondary metabolites including alkaloids, flavonoids, tannins, sterols, saponins and cardiac glycosides. 1000mg/kg dose point of the C. metuliferus fruit extract showed some levels of toxicity on the liver and kidney tissues of albino rats after 28 days of continuous daily oral administration. A further study of C. metuliferus is necessary to fully establish its safety profile.

ACKNOWLEDGEMENT: The authors acknowledge the assistance of Mr. Sale Gotom of the Department of Human Anatomy, Faculty of Medical Sciences, University of Jos, Nigeria, for processing the slides and his efforts in making sure this research work was successful.