INTRODUCTION: Diabetes is a complex multisystemic disorder characterized by a relative or absolute insufficiency of insulin secretion and disturbance in carbohydrate, protein, and lipid metabolism1. It is a major degenerative disease in the world today, which affects a minimum of 15 million people with complications like hypertension, atherosclerosis, and microcirculatory disorders 2.

Diabetes is broadly classified into insulin-dependent, in which the pancreas is not able to synthesize and secrete insulin and insulin-independent in which the body cells do not possess normal receptors for insulin also called Type-1 and Type-2 diabetes respectively. Both types are characterized by high blood glucose levels in the blood resulting in polyuria, polydipsia and polyphagia. The therapeutic remedies of diabetes cover a vast region of the healthcare market. Though there are so many hypoglycemic medicines available in the market but the demand for natural remedies still persists. This is due to the avoidance of side effects posed by these synthetic agents and the price related issues. Several plants are used for treatment of various diseases.

These are natural and do not have any synthetic compounds that may harm the health of the consumer.

Carissa spinarum also is known as ‘‘conkerberry’’ or ‘‘Bush Plum’’ is a large shrub, which belongs to the family of Apocynaceae. It is an erect thorny shrub, with forked branches. It generally grows up to a height of 2-3 meters. Leaves are ovate, leathery with reticulate venation. Leaves exude white latex when plucked from the stem. Flowers are short-stalked, sweetly scented, bisexual and complete. Roots and leaves are rich in tannins, carissone, palmitic acid, benzyl benzoate, farnesene, stigmasterol, ursolic acid, lupeol, campesterol,17-hydroxy-11-oxo-nor-β-amyrone and urs-12-ene-3β, 22β-diol-17-carboxylic acid 3. The plant has many medicinal properties viz. roots are bitter, stomachic, anthelmintic and are used to treat malaria, wound, inflammation, stomach ache, bleeding after delivery, muscle cramps, dysentery, ulcer, diabetes, male and female weakness, skin disorders and antidote for snake bite. Leaves are used to treat remittent fever, jaundice, hepatitis, and chest pain 4. Keeping in view the medicinal properties of Carissa spinarum and presence of various alkaloids in leaves this plant was selected to study its effects in alloxan-induced diabetes in mice liver and kidney.

Collection of Plant Material: Fresh leaves of Carissa spinarum were collected from different areas of district Mandi, Himachal Pradesh and were identified and authenticated by taxonomists of HPU.

Preparation of Plant Extract: The collected plant leaves were cleaned and dried under shade for fifteen days and powder of dried leaves was formed. 1 kg powdered plant sample was extracted thrice in a ratio of methanol: water- 80:20 at 25 °C for 24 h each. For filtration Whatman no. 1 filter paper was used and then the filtrate was concentrated on a rotary evaporator under reduced pressure at 50°C, and dry extract was stored at 4 °C for further investigation.

Acute Toxicity Study: The study was carried out to determine the therapeutic dose of the methanolic leaf extract. For acute toxicity study evaluation of Carissa spinarum methanolic extract was suspended in distilled water and administered orally at a dose of 200, 500, 1000 and 2000 mg/kg body weight. The general activity of mice was monitored for 1 h after dosing periodically during first 24 h and then daily for 14 days. Changes in normal behavior of mice and their weights were monitored and time at which sign of toxicity or death appeared.

Administration of Alloxan Monohydrate: Alloxan monohydrate (Sigma chemicals) was used to induce diabetes in mice. A freshly prepared solution of alloxan monohydrate in distilled water was injected to overnight fasted animals intraperitoneally at a dose of 150 mg/kg body weight but mortality was observed. So, dose was recalculated and mice were injected with alloxan at a dose of 120 mg/kg body weight. Then animals with blood sugar greater than 180 mg/dl were selected for further study and divided into groups. The experimental procedures were carried out in strict compliance with the Institutional Animals Ethics Committee (IAEC/BIO/1-2013).

Determination of Blood Glucose Levels: Blood samples were collected by cutting tips of tails of mice after 72 h of alloxan injection and before dissection using glucometer strips and expressed as mg/dl. Blood glucose levels were measured using glucometer every time on 7, 14, 21, 28 days of the experiment.

Histological Study: Tissues were fixed in Bouin’s fixative for 24 h. After thorough washing in running tap water excess of fixative was removed from the tissues. Tissues were dehydrated finally in different grades of alcohol (30%, 50%, 90%, 100%) and embedded in paraffin wax (58-60 ºC). Sections were cut and employed for hematoxylin-eosin staining.

Haematoxylin-Eosin Staining: Paraffin cut sections of tissue (4-6μm) were stretched on albuminised slides in warm water. Sections were subjected to overnight dewaxing in xylene at 37 ºC followed by hydration in descending grades of alcohol (100%, 90%, 70%, 30%). These were kept in distilled water and subjected to hematoxylin staining for 10-15 min. Sections were passed through acid water (1-2 drops of HCl in distilled water) and again washed in distilled water and dehydrated in ascending grades of alcohol (30-90%). They will be kept in eosin stain for 2-3 minutes and again in absolute alcohol. These were cleared in xylene and mounted in DPX. Slides were dried in the oven, examined, and photographed for further studies.

Acute Toxicity Study: There was no mortality amongst the assigned dose groups of animals and did not show any toxicity or behavioral changes at a dose level of 2000mg/kg. This finding suggested that the methanolic extract is safe or non-toxic to mice, and hence doses of 600, 800 mg/kg were selected for the study. 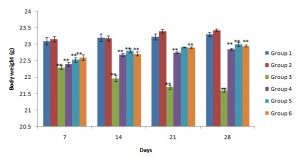 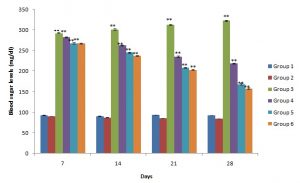 DISCUSSION: Diabetes is manifested by multiple disturbances in the metabolic processes of the body, which are directly attributed to an insufficient supply of insulin. This investigation aimed to study histopathological changes in liver and kidney of alloxan-induced diabetic mice after treatment of Carissa spinarum methanolic leaf extract. Liver sections of alloxan-induced diabetic mice showed marked structural alterations in the liver as a result of absence of insulin. The major alteration was periportal fatty infiltration and necrosis of hepatocytes. Liver lesions in Alloxan-induced hypoglycemia included congestion, hepatosis, and necrosis. Alloxan-STZ induced hypoglycemia additionally revealed hepatitis and Kupffer cell hyperplasia. Acute hepatopathy, like nephropathy, may be ascribed to direct drug-induced toxicity and hypoglycemia or hyperinsulinemia.

The present study evaluation of methanolic leaf extract of Carissa spinarum showed that the oral administration of leaf extract to alloxan-induced diabetic mice reduced fasting blood glucose in dose-independent manner which suggested their inherent hypoglycemic effect. The alloxan-induced diabetic mice showed two to three fold increase in blood glucose levels as compared to the normal control mice. Administration of diabetogenic drug, alloxan monohydrate, caused selective massive destruction of the β-cells of islets of Langerhans resulting in hyperglycemia 5. The lowering effect of blood sugar levels by Carissa spinarum extract, in the same manner, might suggest that the extract may have been absorbed in the cell system through active transport where a particular concentration saturation of the extract occurred resulting in the rest of extract being excreted. Similar results have been reported by other workers 6. The plant's antihyperglycemic action maybe by stimulation of pancreatic secretion of insulin. In this context a number of other plants have also been reported to have antihyperglycemic and insulin-releasing stimulatory effect 7.

The study on the effect of the aqueous extract of C. carandas on alloxan-induced and normoglycemic Wister rats found that the doses of 500 and 1000 mg/kg of the extract significantly decreased the blood glucose levels of alloxan diabetic Wister rats at 4, 8 and 24 h. They concluded that the plant extract doses had both significant hypoglycemic as well as anti-hyperglycemic effects 8.

The decrease in body weight was observed in alloxan-induced mice as a result of abnormal carbohydrate mechanisms. In an earlier study it was reported that a great reduction in protein synthesis was observed in almost all the tissues due to insufficient ATP and insulin 9. An increase in body weight of alloxan-induced mice after treatment with leaf extract was observed. Similar results were observed with the plant extract of E. jambolana in diabetic albino rats 10.

Histopathological changes in kidney of alloxan-induced mice showed renal glomerular congestion with widened urinary space. Vacuolar degeneration in tubular epithelium, karyolysis, and damaged tubules was also observed. Cellular infiltration and renal hypertrophy were also visualized. The kidney histopathology of alloxan-induced diabetic mice showed marked tubular damage, hemorrhage in the Bowman’s space due to glomerular damage. The results indicated a primary and a secondary effect of the diabetic state on the kidney of the mice. The primary effect, the diabetes factor was associated with hyperglycemia and was responsible for dilatation of proximal and distal tubules in the cortex. The secondary effect named the individual response factor was associated with inflammatory processes 11.

Diuresis is a common feature associated with diabetes which may be the reason for structural changes observed with glomerulus 12. The excellent recovery of renal function expected with the treatment of Carissa spinarum can be explained by the regenerative capability of the renal tubules. Similar results have been observed with the treatment of alloxan-induced diabetic mice with Trigonella foenum graecum seed powder 13.

The liver of alloxan-induced diabetic mice showed marked structural alterations as a result of absence of insulin. The major alterations were, degeneration of fibrous connective tissue, infiltration of blood cells, clumping of nuclei at various places and necrosis of hepatocytes. Similar results were shown on diabetic mice which showed acute morphological alterations in the liver involving hepatocyte hypertrophy, bile duct hyperplasia and an increased number of intracytoplasmic acidophilus pellets 14. This damage is partially reversed by the Carissa spinarum leaf extract treatment and is similar to that observed by Vinca rosea extract in alloxan-induced diabetic rats 15.

Various researchers concluded that complications caused by alloxan in the liver can be overcome by restoring the liver functions back to normal through effective control over hyperglycemic conditions 16, 17. The present study showed that Carissa spinarum leaf extract treatment displayed noticeable capacities to reverse renal and hepatic tissue degeneration and disarrangement.

CONCLUSION: The results of the present study revealed that Carissa spinarum methanolic leaf extract is able to reverse and protect renal and hepatic tissues against diabetes mellitus induced organ injuries.

ACKNOWLEDGEMENT: One of the authors is grateful to ICMR, New Delhi, India for the fellowship.