Aim: The aim of this prospective study was to know the variable histopathological changes in the fallopian tube after having ectopic gestation and its correlation with predisposing factors.

Materials and Methods: 100 fallopian tubes having ectopic gestation for study group and

25 fallopian tubes received after sterilization operation for control group submitted in department of pathology between Jan. 2007- March 2009 were included. The conventional H&E stained microsections were prepared from specimen for extensive study. The sections were examined histopathologically for various pathological lesions by standard criteria.

INTRODUCTION: Fallopian tube is one of the commonest sites for ectopic gestation. Pelvic inflammatory disease is one of the important predisposing factors for ectopic gestation. It requires careful diagnosis and prompt management to decrease maternal morbidity and mortality. Ectopic pregnancy accounts for 1.2% of all pregnancies and it is a serious cause of maternal morbidity and mortality 1. Still the true incidence of ectopic gestation is difficult to determine accurately as it varies greatly according to race, socio economic factors and underlying predisposing risk factors 2.

Ectopic gestation (fig. 1) occurs most frequently in the fallopian tubes accounting for approximate 95% of the cases 3. In case of diseased fallopian tube or other predisposing risk factor the fertilized ovum is structured in the tube itself leading to ectopic gestations 4. PID is considered a significant predisposing factor. On epidemiological grounds (correlations between time trends and the geographical distribution of hospital admissions for salpingitis (fig. 2) and those for ectopic pregnancy), there is a poor association between pelvic inflammatory disease and ectopic pregnancy 5. Keeping in view the high rate of tubal pregnancy and highly variable incidence of pathological changes in the tube, this study was conducted to evaluate the association between ectopic pregnancy, risk factors and histopathological findings. 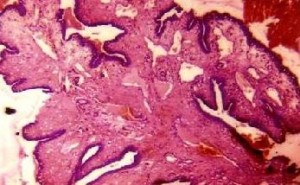 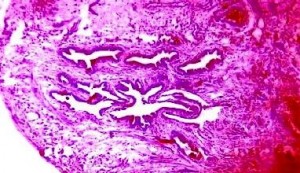 The aim of the project was to study the histopathological changes in the fallopian tube associated with ectopic tubal pregnancy and to observe for predisposing factors, if any.

MATERIAL AND METHODS: In this prospective study, 100 fallopian tubes having ectopic gestation for study group and 25 fallopian tubes received after sterilization operation for control group were included. All these fallopian tubes (diseased and normal) were submitted in department of pathology for confirmation of disease of organ.

TABLE 2: PATHOLOGIC FINDINGS OF THE PATIENTS WITH ECTOPIC PREGNANCY

In, out of total is 56 contralateral tubes were examined of which, 13 patients (23.21%) had chronic salpingitis, three (5.35%) patients had SIN and two (3.5%) had acute salpingitis.  Thirty eight (67.85%) patients were unremarkable. Twenty five fallopian tubes from control group examined did not show any significant pathology.

DISCUSSION: Ectopic pregnancy continues to be a significant cause of morbidity and mortality in women of reproductive age group throughout the world.  Ruptured tubal ectopic pregnancy is also implicated in maternal death during the first trimester of pregnancy 6-11.

There has been significant rise in incidence of ectopic pregnancy from 3-4 per 1000 to almost 16 per 1000 pregnancies 12. This rise has been attributed to the residual tubal pathology after salpingitis to the current wide spread use of intrauterine contraceptive device (IUCD) and to the improved methods of diagnosis and reporting 2.

Fallopian tube is common site for ectopic pregnancy with the highest frequency seen in ampullary portion 13 (79% in our study), while 16% of patients had fimbrial involvement consistent with findings of other studies 6, 14. A high incidence of fimbrial ectopic pregnancy (16%) in our study was reason for presence of hemoperitoneum in our patients consistent with other studies 15.

78% patients had rupture tubal ectopic tube while in 22% cases intact tube was present.  In the present study 22 patients had histopathologically intact tubal wall and all these women reported between 6.1-7 weeks of gestation with symptoms of chronic ectopic gestation.  Tubal rupture may occur when size of pregnancy become too large to be accommodated by narrow lumen of fallopian tube. However various studies had reported the period of gestation in ruptured or unruptured tubal ectopic pregnancy significantly indifferent.

The risk among intra uterine contraceptive device users is 2.94-4.5 times that in non-users.  In this study it was found that 47% of patients were having current or past history of usage of intra uterine contraceptive device.  However in contrast only 3.9% had in situ contraceptive device and 5.6% were using oral contraceptives in an eight year review of ectopic pregnancy by Helvacioglu et al., 16.In the present study 35% patients were found to have a history of pelvic inflammatory disease and 19% admitted to previous abdominal surgery. Out of these 19 % patients, (84.19%) has history of some tubal surgery, tuboplasty and salpingectomy etc.  The figures of present study are consistent with studies conducted by other authors 16.

Of the total 100 cases of tubal ectopic gestation, 86% showed severe associated abnormality other than the effects of developing ectopic pregnancy in the form of tubal dilation, hemorrhage, necrosis, presence of trophoblastic tissue and villi.  Eighteen cases showed acute salpingitis by virtue of presence of acute inflammatory cells. Kutluay et al reported acute salpingitis in 34.8% cases, but related and attributed this directly to ovum plantation 17. However, if this is so, the incidence would have been higher than observed.

The next common pathological finding associated was chronic salpingitis (39%) which was characterized by presence of lymphoplasmacytic infiltrates in the lamina propria and by distortion of tube due to fibrosis.

Follicular salpingitis was diagnosed when mucosal rugae had lost their normal structure and were represented by thickened mucosal folds adherent to one another, forming partitioned cavities of variable sizes 18. Some authors have reported a very high incidence of chronic salpingitis of 89% and 88% in ectopic pregnancy 19-21.  Our incidence of 39% is likely due to advent of antibiotics, better management and lower incidence of pelvic inflammatory diseases in our population.

Salpingitis Isthmica Nodosa is other well described pathological lesson of unknown etiology, which is defined as the microscopic presence of tubal epithelium, well in myosalpinx or beneath the tubal serosa in a complete cross section of fallopian tube.  Features of SIN were reduced in 8% cases and six cases had associated inflammation.  In incidence of 45.9% and 36.4% of salpingitis isthmica nodosa has been reported by other studies 14, 19, where as 12% by Kutluacy et al., 17.

In our study presence of chronic salpingitis with SIN in six cases (6/8) indicate association between Salpingitis Isthmica Nodosa and other infectious lesions. Seven cases in this study showed calcification in the wall of tubes which may be squeal of some healed lesion such as tuberculosis. However multiple sections may sometimes be required for diagnosis of active disease. Endometriosis was not found in any one of our cases in the same tube or in contralateral tube.

CONCLUSION: Salpingitis Isthmica Nodosa, acute as well as chronic salpingitis is associated with high incidence of ectopic gestation. This inflammatory disease may be secondary to postpartum or postabortal or intrauterine contraceptive device usage. With increased knowledge and experience early recognition of signs and symptoms of pelvic inflammation and adequate antibiotic treatment in acute phase of disease can prevent ectopic gestation by presenting certain predisposing factors.