ABSTRACT: Herbal drugs are emerging as a leading area for new drug discovery and development, and are being looked at seriously for health problem. Plants, especially used in Ayurvedic can provide biologically active molecules and lead structures for the development of modified derivatives with enhanced activity and or reduced toxicity. Exposure of toxicants manifests variety of pathological lesions in various organs depending upon its dose and the period of treatment. Tridax procumbens has been found to possess various significant medicinal properties. Present study is therefore done to study the histological changes on Kidney of albino rats due to effect of ethanolic extract of Tridax procumbens; orally at a single and daily administration of doses at 300mg/kg b.wt and 600mg/kg b.wt for intervals of 7, 14 and 21days. It is quite obvious that its administration may also affect the cellular organization of vital organs. After treatment period there was alterations occurred in histoarchitecture of kidney and it showed remarkable changes in cortex and medullary region.

INTRODUCTION:Herbal plants have been used for medicinal applications from earliest time, when man began caring for his body and health. Ayurveda, Siddha, Unani and Homoeopathy are largely based on the plants. Majority of anti-drugs are derived from medicinal plants.

The data recorded through ethnopharmacological field studies is invaluable as these provide information on wild medicinal plants used by tribal to treat their common and chronic ailments.

Weeds are not really “unwanted” especially in the light of traditional herbal medicines. These “naturally-growing-plants” are generally known as a group of very aggressive, noxious, competitive and troublesome plants. Medicinal plants are value added for the content and chemical composition of their components. Therefore, the demand on plant based therapeutics has increased many folds in both developing and developed countries, due to the growing recognition that they are natural products, being non-narcotic, having no side effects and easily available at affordable prizes.

Tridax procumbens is very common herbal plant of India and found as weed in Bundelkhand region. It belongs to the family “Asteraceae” and commonly known as “Ghamra” in Hindi and “Tridax daisy” and “Coat buttons” in English. The plant has been found to contain various constituents such as flavonoids, alkaloids, sterols, carotenoids, saponin, tannin etc 1. It possesses various remarkable pharmacological activities such as antipyretics, immunomodulatory, anti-diabetic 2, anti-inflammatory, anti-bacterial, anti-diarrhoeal, antioxidant 3, anti-hepatotoxic, anti-inflammatory, analgesic and hemostatic 4. It has also been claimed to cure disorders like blood pressure, bronchial catarrh, malaria, dysentery, diarrhoea, stomach-ache, headache, wound healing 5; it also prevents falling of hairs and checks hemorrhage from cuts and bruises. Its flowers and leaves possess antiseptic, insecticidal and parasiticidal properties 6.

The plant is also used to prepare ‘Bhringraj’; which is a reputed medicine in Ayurveda for liver disorder. Its alcoholic extract is useful in liver regeneration 7.

Preparation of Extract: Collected material was shade-dried until total moisture was removed from the plant. Then the material is grinded in electric mixer and further it was extracted with absolute alcohol in Soxhlet’s apparatus. After extraction the total solvent from the extract was removed and the crude drug was made by keeping it on heating plate. Finally, it was preserved inside the desiccators. For experimentation the dose at a concentration of 300mg/kg b.wt and 600mg/kg b.wt was prepared.

Animal used: The present study was carried out at Department of Zoology, Institute of Basic Sciences, Bundelkhand University Campus, Jhansi. The study was conducted on albino rats of Sprague dawley strain weighing about 200 ± 10gm, purchased from CDRI, Lucknow. They were kept in polypropylene cages in centrally air condition room 12 hours light & 12 hours dark cycle. The animals had free access to water & food (rat pelleted- diet) and were left to acclimatize at least one week before starting the experiment.

All experiments were carried out in accordance with the guideline of the CPCSEA (716/02/9/ CPCSEA).

Experimental Design: Selected animals were divided into three groups and maintained under uniform husbandry conditions. Various doses of Tridax procumbens viz 300mg/kg b.wt and 600mg/kg b.wt administered orally with the help of gastric feeding needle at a once time and daily. Under each dose regimen the animals were sacrificed after 7, 14 and 21 days of treatment. Control animals were maintained simultaneously which received vehicle only. After 24 hours of last treatment the animals were sacrificed. At autopsy kidney were excised out, freed from adhering tissue and weighed on electronic balance to the nearest of 1mg. Apart of each tissue was fixed in bouins fluid. The tissues were then washed under running water for overnight and then dehydrated in alcoholic series. The xylene was used as clearing agent. Paraffin blocks were prepared. The sections of 4 – 6 microns were cut and stained slides were examined microscopically for the change in cellular organization.

RESULTS: Fig. 1 represents normal histo-architecture of kidney. Administration of ethanolic extract of Tridax procumbens at a single dose of 300mg/kg b.wt showed remarkable changes in cortical region of kidney after 7 days of treatment. It showed shrinkage of glomeruli, degeneration and proliferative changes in cortical tubules (Fig. 2).

However at later duration of 14 days of treatment the renal structure showed vacuolation (Fig. 3) and at 21 days, disturbances in cortical tubules were observed (Fig. 4). 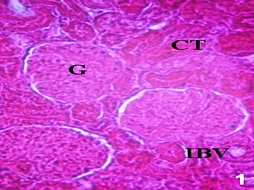 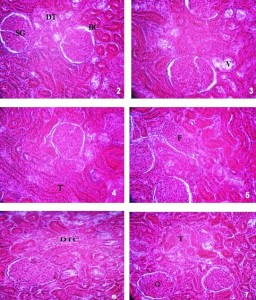 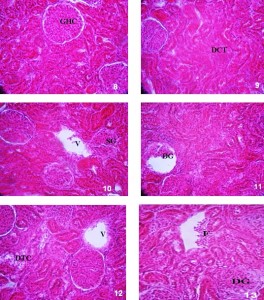 At daily administration of Tridax procumbens at 300mg/kg b.wt caused remarkable changes in the kidney. Its administration for 7 days caused hyper cellularity of glomeruli with ruptured endothelial lining and accentric concentration of glomeruli material (Fig. 8). At 14 days of treatment, some of the cortical tubules degenerated and have lost their tubular epithelium system and caused tubular exfoliation (Fig. 9). These changes were more remarkable when period of treatment was increased to 21 days which showed vacuolation and degeneration of glomeruli material (Fig. 10).

The changes were more prominent during later durations at a higher dose of 600mg/kg b.wt caused severe pathological changes in kidney for the period of treatment for 7 days. The cortical region showed degenerative changes (Fig. 11). After 14 days of chronic treatment degenerated tubular epithelium along with cytoplasmic vacuolation was quite prominent (Fig. 12). However after 21 days of treatment regimen remarkable damage in cortical region along with vacuolation and fibrosis were noticed clearly (Fig. 13).

DISCUSSION: Kidneys are the site of filtration of blood to remove waste metabolic products that are detoxified by the liver or are being produced in other cells of the body. In present study, mild changes occurred in kidney during sub-acute treatment of Tridax procumbens at both the dose levels while chronic treated kidney showed much more alteration it may be due to presence of certain phytochemicals of plant and increased activity of acid phosphatase enzymes during biochemical studies.

Generally, in the phytochemical screening of any plant one normally identifies as secondary metabolites that have accumulated to some extent at specific organ of the plant. These metabolites that are mainly used by the plant for protection against herbivores may have pharmacological activity when tested on animals as reported by Ambi et al (2007) 8.

Author’s revealed kidney histology of treated rats showed features consistent with renal epithelial injury from toxins. Many herbal preparations have been found to exhibit renal tubular necrosis showing extensive interstitial fibrosis and severe tubular loss most prominent in the outer cortex. It has been shown that absorbed foreign proteins by proximal convoluted tubules became located in particles having the property of lysosomes.

Moreover proximal convoluted tubules have ability to absorb a variety of proteins including foreign proteins and other high molecular weight substances from the glomerular filtrate. It is therefore clear that these are the lysosomes which take the load of foreign proteins and reflect tubular pathogenicity. The significance of this in traditional practice need to be evaluated especially because the plant has been found to exert hypoglycemic properties and some herbalists promote its use in Diabetes mellitus a syndrome that is almost always associated with nephropathy 9.

Similarly, aqueous leaves extract of Catharanthus roseus showed effect on kidney of albino rats and revealed oxidative glomerulonephritis with the Bowman’s capsule 10. Toxicopathological effects of Guiera senegalensis extracts also showed haemorrhage and isolated tubular necrosis of the kidney in wistar rats. It may attribute to the kidney damage that also affected erythropoietin production 11.

Author’s also agreed with the theory of target organ toxicity 12 since the kidney is the organ of excretion 13 and it may be an indication that the concentration of the toxic principle in the extract is not high enough to cause significant health hazard. Similar results were also observed due to effect of crude aqueous stem extract of Anisopus mannii on kidney of albino rats 14.

Similar nephro-hepato toxicity were also reported in albino rats and in mice treated with extract of Alternenthera sessilis 15, 16.

CONCLUSION: Therefore, concluded that toxic agents cause all these changes observed in the kidney of the rats in the treated groups, which means that the active constituents in the Tridax procumbens could cause mild damages to vital organs at high doses.

ACKNOWLEDGEMENTS: Authors are thankful to Head, Department of Zoology, and B.U Campus, Jhansi for providing facilities for experimentation and RGNF’S (UGC, New Delhi) for providing financial support for the research work.