ABSTRACT: KLF proteins are highly conserved among mammals from human to mouse, with many KLFs also having homologs in Gallus gallus (Chicken), Danio rerio (Zebra fish), and Xenopus laevis (Frog). On the basis of functional characteristics, KLF proteins can be divided into three distinct groups. KLFs in group 1 (KLFs 3, 8, and 12) serve as transcriptional repressors through their interaction with the carboxy-terminal binding protein (CtBP). Family members in group 2 (KLFs 1, 2, 4, 5, 6, and 7) function predominantly as transcriptional activators. KLFs in group 3 (KLFs 9, 10, 11, 13, 14, and 16) have repressor activity through their interaction with the common transcriptional corepressor Sin3A. The encoded protein is thought to play an important role in the regulation of epithelial to mesenchymal transition, a process which occurs normally during development but also during metastasis. A homology modelling method was used for the prediction of the structure and other various physico-chemical properties of protein were obtained using ProtParam. 3D structure was constructed for the target protein usingI- TASSER and SWISS-MODEL. The comparison between the structures generated from above mentioned tools indicates greater acceptability of the structure generated from I- TASSER and validation of structure was performed by using Ramachandran plot. The present study gave an outlook on KLF8 protein and further research to be carried out in preventing the cancer in human.

Kruppel like factor 8 (KLF8) is a GT-box (CACCC) binding dual-transcription factor that has a critical role in the regulation of cell cycle progression, transformation EMT and invasion 2, 10.

KLF8 expression is promoted by Src and phosphatidylinositol 3 kinase signaling3and its transcription is activated by Sp1 or inhibited by KLF34. KLF8 is also regulated by posttranslational sumoylation and localization 5. FAK is a critical regulator of both EMT and MMPs during breast cancer invasion and metastasis 6.Like FAK, KLF8 is highly overexpressed in invasive human cancers including breast cancer 7and promotes breast cancer cell invasion.

A novel role of KLF8 in regulating oncogenic transformation.

Our finding that KLF8 is overexpressed in human cancer combined with considerable evidence that link elevated expression and/or activity of Src, FAK and cyclin D1 with the development of human cancer 8strongly suggests a potentially significant role for KLF8 in tumor progression of human cancer.

Recent investigation revealed that KLF8 induces tumor cell epithelial to mesenchymal transition (EMT) and maintains the invasive potential of cancer, which seemingly plays a crucial role in metastatic progression of human carcinoma 9.KLF8 protein and mRNA expression was not only significantly higher in renal cell carcinoma (RCC) than in non-neoplastic renal tissue, inhibition of KLF8 via siRNA could also induce cell apoptosis in vitro and reduced tumor growth in vivo 10. KLF8 overexpression was demonstrated in highly metastatic or recurrent hepatocellular carcinomas (HCC).

In this study, KLF8 could even be linked with clinical data and revealed to be a significant predictor for overall and progression-free survival11. Only recently additional data was presented, which identified KLF8 as an activator for matrix metalloproteinase 9 (MMP9), leading to enhanced tumor invasion of human breast cancer 12.

Knowing the three-dimensional structure of a protein can give invaluable information about its functional and evolutionary features and in addition, the structural knowledge is useful in drug design efforts. Homology modeling makes structure predictions based primarily on its sequence similarity to one or more proteins of known structures.

(b)    Aligning of the query sequence to the template structures.

(d)    Modeling side chains and loops which are different than the templates.

(e)     Refinement and evaluation of the quality of the model through conformational sampling 13.

Retrieval of target sequence: The FASTA sequence of the KLF8 protein from Homo sapiens was retrieved from the NCBI database [http://www.ncbi.nlm.nih.gov] that has 359 amino acids (gi-85567555, gb- AAI12110.1). It was found that the three-dimensional structure of the protein was not available in Protein Data Bank.

Sequence alignment: Protein sequences alignments of the target were obtained in FASTA 17 format and Clustal W 18 was used for the multiple sequence alignment and tree was obtained. Default parameters were applied and the aligned sequences were inspected for number of gaps and insertions.

Homology modelling and structure refinement: 3-D structure prediction was done by using online tools SWISS-MODEL and I- TASSER  .The modeling involves four basic steps, first searching structure showing homology with target, then selecting a best template having maximum identity with the target sequence which follows its alignment with the target and modeling the structure using I- TASSER. The modelled structure is then evaluated using PROCHECK 20.

RESULTS & DISCUSSION: The similarity search for the sequence was carried out with the help of BLAST-P tool. The BLAST- P analysis gives the alignment with 22 protein sequences.

FIGURE 1: SHOWS THE PHYLOGENETIC RELATIONSHIP AMONG THE KLF8 PROTEINS

Important physiochemical properties of polyprotein determined using ProtParam: Table 1 represents Physiochemical Parameters calculations using Expasy’s ProtParam tool. A protein with instability index smaller than 40 is predicted to be stable, whether a value above 40 predicts that the protein may be unstable21. Instability index of 69.47 indicates the unstable nature of protein. Low extinction coefficient (17335) shows the presence of Cys, Trp and Tyr residues in low concentration. The aliphatic index is assumed as a positive factor for the increase of thermal stability. High aliphatic index (74.40) of query protein suggests that the protein may be stable for a wide temperature range. The Grand Average hydropathy (GRAVY) value is low (-0.469) and indicates the possibility of interaction with water. 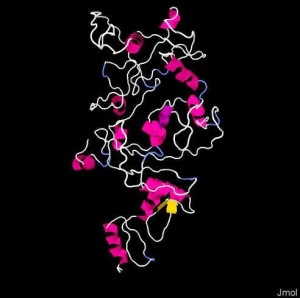 Model shows the structure of protein (KLF8).following color shows below

There is no experimental structure available for the protein considered. KLF8 Protein from Homo sapiens (human) was structured via two homology modeling programs namely SWISS-MODEL and I- TASSER. The ϕ and ψ of Ramachandran plot produced by of non-glycine, non proline residues were summarized in table 3.

TABLE 3: RAMACHANDRAN PLOT CALCULATION AND COMPARATIVE ANALYSIS OF THE MODELS FROM SWISS-MODEL AND I- TASSER COMPUTED WITH THE PROCHECK PROGRAM 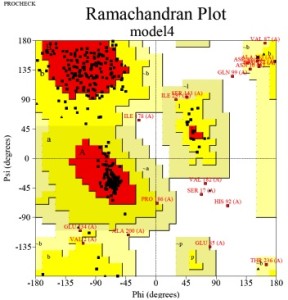 FIGURE 4: RAMACHANDRAN PLOT OF THE PREDICTED STRUCTURE BY I- TASSER

On the basis of the results from two different programs SWISS-MODEL and I- TASSER compared in table 3, it was observed that the model obtained from I- TASSER was more satisfactory as compared to that by SWISS-MODEL. The final model was seen in J-MOL and is shown in figure 3.

The distribution of the main chain bond lengths and bond angles was within the limits for these proteins. These figures suggest a good quality of the predicted model.

CONCLUSION: In the modeling procedure of KLF8 protein from Homo sapiens (human),two online tools were used and the predicted model verification program PROCHECK was found that the model generated from I- TASSER was well conformed to the stereochemistry suggesting reasonably good quality. Computational methods help to predict protein structure more quickly and economically. Present study suggests that the predicted structure is ready to be verified in vitro and will help researchers for further experimentation in disease prevention.

ACKNOWLEDGEMENTS: The authors are grateful Department of Biotechnology, MITS, Gwalior, providing us such kind of opportunity to work.