ABSTRACT: Asparaginase is used to treat acute lymphoblastic leukemia. Acute lymphoblastic leukaemia is seen in both adults and children. It is a most common pediatric cancer, the disease is more common in ages between 2-5 years children. The causative source of acute lymphoblastic leukaemia to be multiple routes, by genetic susceptibility, endogenous exposure or exogenous exposure. L-asparaginase catalyzes the hydrolysis of L-asparagine to L-aspartic acid. L-asparaginase is commonly used as an antineoplastic agent in lymphoblastic leukaemia chemotherapy. We assumed that a structural bioinformatics approach utilizing homology-based molecular modelling and docking approaches. We used sequence data and a homology-based approach to construct a 3D-structural model of asparaginase-like protein from NCBI (GenBank: AAM28434.1). The predicted model was then used to perform molecular docking simulations with natural flavonoid derivatives to assess their ability. The ligand binding residues were found to be similar to the predicted active site residues

INTRODUCTION: L-Asparaginase is the first enzyme to be therapeutically effective in human malignant diseases. L-asparaginase from three different sources-two from E.coli and one from Erwinia carolovora was made available and used in the treatment of acute lymphoblastic leukaemia. L-asparaginase (EC 3.5.1.1) 1 from E.coli has an antitumor activity similar to that of guinea pig serum. 2 The administration of such an enzyme protein for a long duration, in general, produces the corresponding antibody in the living bodies, and the antibody causes an anaphylactic shock or neutralization of the drug effect.

L-asparaginase anti-malignant  activity  is  related  with  the possessions  of  exhausting  the  circulating  pool  of  L-asparagine by the asparaginase catalytic activity. 3 The enzyme can be isolated from different sources plants, animals, bacteria, fungi and yeast.  L-Asparaginase inhibits in vitro mitogen.  While injecting the drug intravenously it cleaves all the circulating L-asparagine which leads to selective starvation of L-asparagine in tumour cells, causing impaired protein synthesis and cell death. 4

Flavonoids are poly-phenolic compounds distributed in vegetables and fruits. Flavonoids have been suggested to be most  bioactive  compounds  in  the  diet  that  are  responsible  for  decreasing  the  risk  of  cancer.  These are plant secondary metabolites and have low molecular weight, which are widespread in the plants and foods of plant origin 5. Poly-phenols and phenols are the most potent chemo-protective agents.  Plant flavonoid derivatives are of outstanding importance. All the plants contain a wide spread of polyphenols that include flavonols (myricetin, quercetin) flavones, chalcones, flavanidiols, anthocyanins, anthocyanidins 6. These nontoxic ingredients, found in several foods  have been demonstrated to possess protective properties, for instance, flavonoid derivatives have been reported to have multiple biological activities including anti-inflammatory, anti-fungal, anti-cancer, anti-viral, anti-bacterial and anti-oxidant activities 7. Considering the increasing interest in anticancer activities of natural phenolic compounds especially flavonoids, molecular modelling and docking studies were accomplished in this work with the object to find mathematical models that could aid in understanding and be used for prediction of the anticancer activity of flavonoids.

MODELLER 9.15 was then used to gain satisfactory models; an automated approach to comparative modeling by satisfaction of spatial restrains.10 After manually modifying the alignment input file in MODELLER 9.15 to match the template and query sequence, 20 models were generated and were then minimized using the molecular dynamics and simulation procedure CHARMM in MODELLER for each of the primary sequences out of which the models with least modeller objective function were then chosen. These models were then checked in detail for the protein structure stereochemistry by using PROCHECK 11, which generates Ramachandran plots and comprehensive residue by residue listing facilitates the in depth assessment of Psi/Phi angles and the backbone conformation of the models.

Molecular docking studies were carried out using Autodock 4.2.  The  initial  flavonoid structures  were sketched in SYBYL 6.7 and minimized using Gasteiger-Huckel  charges  by Powell  gradient  method, and  convergence  criterion  was  selected 0.005kcal/mol. 12 These molecules were saved in .mol2 format. Molecular docking study was carried out using Autodock 4.2 software, 13 which uses Genetic algorithm (GA). L-Asparginase protein was loaded into AutoDock Tools (ADT) (http://autodock.scripps.edu/ resources) as a receptor and made ready for docking. After loading the protein, hydrogens were added using the edit option in ADT. Initially, the modelled PDB file does not contain any hydrogens. The ligands were separately and individually docked with asparaginase, a grid for dock search was built for the molecule to find the most probable binding site of asparaginase and to measure its interaction parameters with synthesized molecules. The docking process was carried out in the default parameters of ADT. Active sites has been predicted by submitting the predicted homology model to 3Dligand site, a binding site prediction server (http://www.sbg.bio.ic.ac.uk/3dligandsite/advanced.cgi).14

Present study reports that the template protein (PDB ID: 2ZAK) having high degree of homology with asparginase like protein was used as a template with identity of 37% with atomic resolution of its X-ray crystal structure at 2.01 Å. The secondary structure alignment obtained between the query and template sequence is shown in Fig.1. The query (AAM28434.1) subjected for homology modeling by Modeller ended up with a loop by default modeling process. The G-factors indicating the quality of covalent and bond angle distance were  The predicted model was subjected to PROCHECK analysis to determine psi and phi torsion angles, the comparable Ramachandran plot characteristics and G-factors confirm the quality of predicted model. The PROCHECK software is used for validation of modelled protein, it generates a number of files which list complete residue by residue data and the assessment of the overall quality of the generated structure as compared to well refined structures of the same resolution. 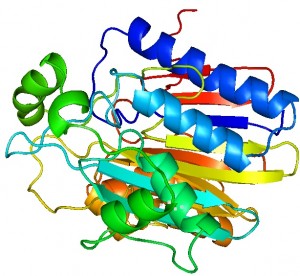 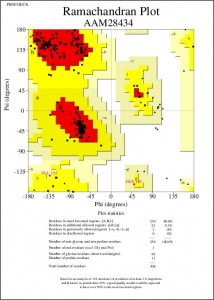 The study of 4 natural flavonoid compounds has revealed that the amino residues can frequently interact with asparagine binding site, and that these residues are responsible for the selectivity of flavonoid inhibitors.

The docked poses of all the compounds with asparagine are shown in Fig.3 clearly demonstrated the binding positions of the ligand with the protein.  Analysis of the receptor/ligand complex models generated after successful molecular docking of the natural flavonoids Quercetin, naringenin, hesperetin, and leucocyanidin were based on the parameters such as, hydrogen bonds distance, amino acid interactions, binding energy and orientation of the docked compound within the active site. As a general rule, both hydrogen bond and hydrophobic interactions between the compound and the active sites of the receptor have been found to be responsible for mediating the biological activity. 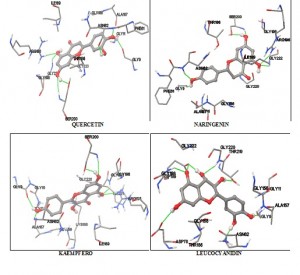 CONCLUSION: Model building and molecular docking study were used to attain details of interaction between protein and ligands-quercetin, naringenin, kaempferol, and leucocyanidin. The validation results by PROCHECK program indicated that the generated models are reliable and are analogous with the already established structures of other asparaginase proteins. The Docking studies showed many similar residues binding with the quercetin, naringenin, kaempferol, and leucocyanidin ligands into the active site of Asparaginase like protein. Gly9, Asn62, Arg196, Ser200 showed prominent interactions with all the four flavonoids. The detailed 3D structure, interaction information and the key residues identified are helpful for guiding the site-directed mutagenesis investigation.