ABSTRACT: Valtrate is one of the major valepotriates reported from various species of the genus Valeriana. Aim of the present study was to develop and validate analytical method for quantification of valtrate in dried roots of Valeriana jatamansi and Valeriana pyrolaefolia, both members of family Valerianaceae. Acetonitrile and water (70:30) in isocratic mode were used with an aflow rate of 1.5 mL/min (at 254 nm) using Waters HPLC system. Valtrate elutes within 10 min. It has shown a linear range from 100-200 ng with a correlation coefficient of 0.999. The reverse phase HPLC method is simple, accurate, precise and can be used for estimation of valtrate in V. jatamansiand V. pyrolaefolia. The studies also show the variation of valtrate content in V. jatamansi, procured from market, wild and cultivated sources.

INTRODUCTION: Valerian is a common name given to crude drugs consisting of the underground parts of Valeriana species (Fam. Valerianaceae). The genus Valeriana comprises 200 species that are distributed worldwide and many of them are used medicinally.  The plants are perennial herbs or undershrubs with a strong-smelling rootstock and are chiefly found in the temperate and cold regions of the northern hemisphere. Out of the 200 known species of Valeriana, 13 have been reported to be available in India. Indian valerian or V. Jatamansi, commonly known as ‘Tagar’ or ‘Mushkbala’ is used for similar purposes as V. officianalis 1-6. The plant is widely distributed in temperate Himalayas from Kashmir to Bhutan up to an altitude of 3400 m.  It is a slightly hairy, pubescent herb upto half

meter in height and bears long-petioled basal leaves that are 2.5 to 7.5 cm long and 1 to 6 cm wide, cordate to ovate with toothed or sinuate margin. Stem leaves are very few, much smaller, entire or pinnate.  Flowers are white or tinged pink, in a terminal corymb, often unisexual, showing the phenomenon of gynodioecism.  Bracteoles are as long as the fruit. The drug has high domestic and export market. Indian valerian, together with Mexican species, is used as a commercial source of valepotriates which are monoterpenoid constituents characterized by furanopyranoid bicyclic skeleton.

The first valepotriate was isolated in 1966 as a novel constituent of V. wallichii. The major valepotriates of Valeriana species are valtrate, acevaltrate, and didrovaltrate, representing more than 90 percent of total valepotriate content 7, 8. The genus Valerianaowes its importance to the tranquilizing activity, which has been a subject of extensive investigations to establish the chemical and pharmacological basis of its use 9, 10. Besides this, valtrate, one of the major components of this genus has been shown to have significant anxiolytic activity 10, 11. V. pyrolaefolia is another species that grows in India from Kashmir to Kumaon between an altitude of 3000 to 5000 m. It is a sparingly pubescent herb with 5 to 25 cm long, erect, simple, succulent stem reported from The radical leaves are often 2 to 3 cm long, petiolated, orbicular or elliptic obtuse; cauline leaves sessile, ovate 0.8 to 1.5 cm long.  Flowers are white or tinged pink, in a terminal corymb, 2.5 to 5 cm. The present studyis designed to develop and validate analytical HPLC method for estimation of valtrate in V. jatamansi and V. pyrolaefolia.

Plant Material: The plant material of Valeriana jatamansi was collected from different places of India in Himachal Pradesh (Chamba, Dalhousie, Joginder Nagar, Kullu, Shimla), Uttaranchal (Almora, Badrinath, Mussoorie, Nainital) and Jammu & Kashmir (Patnitop). The details are given in Table 1. The cultivated samples were procured from Herbal Research Garden, Joginder Nagar. The commercial sample of V. jatamansi was procured from the Kullu market. The plant material of V. pyrolaefolia Decne. was collected from Gulmarg (Jammu & Kashmir).

The collected material was authenticated on the basis of taxonomic characters and by direct comparison with herbarium specimens available at the Forest Research Institute, Dehradun (Uttaranchal). The voucher specimens of V. jatamansi (accession number 1466) and V. pyrolaefolia (accession number 1467) have been deposited for future reference in the Museum-cum-Herbarium of University Institute of Pharmaceutical Sciences, Panjab University, Chandigarh.

Chemicals and Reagents: All chemicals and reagents used were of high purity obtained from Merck Ltd. Or S. D. Fine-Chem Ltd.

Preparation of Standard Solution: Valtrate (2.97 mg) was dissolved in 10 mL methanol in a 25 mL volumetric flask, and volume was made upto the mark to obtain a stock solution.

Preparation of Sample Solution: Coarsely powdered roots of drug 1 g were extracted with dichloromethane (25 mL) at room temperature for 5 min in a conical flask on a shaker. The extract was filtered, and the marc was washed with 10 mL of fresh dichloromethane, and the filtrates were combined. The extracts were dried using a rotary evaporator. The residue obtained was dissolved in methanol, and the volume was adjusted to 50 mL in a volumetric flask.

HPLC Instrumentation and Chromatographic Conditions: Estimation of valtrate in drug samples was carried out using high-performance liquid chromatography in isocratic mode. Waters HPLC system equipped with automated gradient controller, 510 pumps, U6K injector, 481 detectors and data module configured to Winchrom was used for the analysis. The elution was carried out at ambient temperature (25 ± °C) on a Merck C18 column (Lichrospher 100 RP-18; 5µ; 4 × 250 mm) using a mixture of acetonitrile: water (70 : 30) at a flow rate of 1.5 mL/min.  The detection was done at 254 nm. Extractions were carried out in triplicate, and further, each extract was analyzed in triplicate. The samples were prepared by filtering the appropriately diluted extract through 0.45 μm filter before injecting a uniform volume of 10 μL of each sample. The average area under the peak corresponding to valtrate in an injected sample was noted. The valtrate amount in the test sample was calculated from the standard curve of valtrate generated under similar chromatography conditions.

Linearity Plot of Valtrate: From the stock solution, six standard working solutions were obtained by appropriate dilution with methanol. The concentrations of working standard solutions were 0.5, 1.0, 1.5, 2.0, 2.5 and 3.0 μg/mL.

A constant volume of 10 μL of each concentration was injected in triplicate, and the average AUC of a peak corresponding to valtrate was noted for each concentration. A standard plot was constructed in Microsoft Excel 2000 by plotting the mean peak area against the injected amount.

Method Validation Studies: The method was validated as per ICH guidelines with respect to sensitivity, precision, repeatability, and accuracy12. Instrumental precision was also checked by repeatedly injecting same solution of valtrate and analyzing the results for the coefficient of variance (% CV). The repeatability of the method was confirmed by repeating the analysis and analyzing the variability in terms of the coefficient of variance. Inter- and intra-day variability of the method was studied by analyzing the valtrate solution of the same strength on different occasions and analyzing the results. The recovery studies were carried out by adding a known amount of the valtrate (at 50%, 100%, and 150% levels) to an accurately weighed 1 g drug powder. These spiked samples were processed as per details given above.

Estimation of Valtrate In V. Jatamansiand V. Pyrolaefolia: A constant volume of 10 μL of the solution as described in sample preparation, after filtration through 0.45 μm filter, was injected and the analysis was performed in triplicate. The concentration of valtrate in the injected solution was determined using the standard plot and the mean AUC of valtrate peak in the test solution.

Linearity Plot of Valtrate: Linearity plot of Valtrate showed a correlation coefficient of 0.999. The regression equation obtained from the plot was used to quantify the content of valtrate in the drug. Fig. 1 shows the standard plot of valtrate. 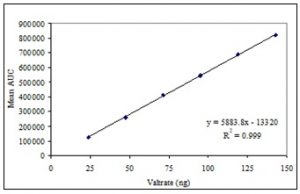 Method Validation Studies: The HPLC method of valtrate analysis in valerian samples was validated for sensitivity, precision, and accuracy Table 2. The sensitivity or limit of detection of valtrate was 1.9 ng. The linear range of valtrate estimation (25 to 140 ng) showed an excellent coefficient of correlation (r2 = 0.999). The intra- and inter-day precision with relative standard deviation less than 2 percent Table 2. indicated that the proposed method was precise and reproducible. The average recovery was found to be 98.86 %.

Estimation of Valtrate In V. Jatamansi and V. Pyrolaefolia: Fifteen drug samples from three different states covering altitude range of 1200 to 3200 m were analyzed for valtrate content. Ten samples were from Himachal Pradesh (altitude range 1200 to 2800 m); four samples were from Uttaranchal (altitude range 1650 to 3200 m) and one was from Jammu & Kashmir (altitude 2000 m). These samples were drawn to represent maximum possible geographic variation and also included cultivated samples besides wild accessions Table 1. The cultivated samples were procured from Joginder Nagar in Himachal Pradesh (located at 1200 m between north latitude 31 °C 13'50'' and 32 °C 04'30'' and east longitude between 76°37'20'' and 77 °C 23'15''). The place shows temperature variation of 4 to 18 °C during winter and 22 to 33 °C in summer.

TABLE 3: CONTENT OF VALTRATE IN DIFFERENT SAMPLES OF VALERIAN

Both wild and cultivated stocks showed great variation in the valtrate content Table 3, which ranged from 0.01 to 0.79 percent in wild samples and 0.17 to 0.79 percent in cultivated samples. The valtrate contents in the wild samples from Uttaranchal were between 0.12 to 0.79 percent, while in samples from Himachal Pradesh a variation of 0.12 to 0.61 percent was noted.  The high altitude samples of Badrinath and Dalhousie (altitude 3200 m and 2500 m, respectively) had a low content of valtrate 0.12 percent.  The low altitude samples from two places Chamba (1000 m) and Almora (1650 m) showed high valtrate content (0.61 and 0.79 percent, respectively). The only sample collected from Jammu & Kashmir (Patnitop) from an altitude of 2100 m showed the lowest content of valtrate (0.01 percent) among all the analyzed samples. The market sample from Himachal Pradesh also showed a very low (0.1 percent) content of valtrate. The cultivated samples grown at an altitude of 1200 m also showed variation among themselves. One sample grown under shade (VJHGJN) had the highest valtrate content (0.79 percent) comparable to the highest in the wild samples.  The lowest valtrate percentage among the cultivated samples was observed in VJCAB (0.17 percent).

CONCLUSION: Valepotriates are the biologically active class of compounds, and therefore, it was decided to use valtrate, a major valepotriate of valerian, as a marker for standardizing V. jatamansi and V. pyrolaefolia using HPLC.

The developed method was duly validated for sensitivity, linearity, accuracy, precision, robustness and recovery. The HPLC method for analysis of valtrate in V. jatamansiis simple, precise, accurate and reproducible. The valtrate content in V. jatamansivaried from 0.01 to 0.79 % w/w. The only sample of V. pyrolaefolia showed a moderate content (0.57 percent) of valtrate.