ABSTRACT: A simple, selective, rapid and economical reversed phase high performance liquid chromatographic method for the determination of metformin hydrochloride in bulk and dosage forms has been developed and validated. The separation was carried out on a Discovery reversed phase C-18 column (250 mm x 4.6 mm, 5.0 µm) with UV detection at 233 nm. The mobile phase contained 34% acetonitrile and 66% aqueous phase. Aqueous phase contained 10 mM KH2PO4 and 10 mM sodium lauryl sulfate. Mobile phase pH was adjusted to 5.2. The mobile phase was run isocratically. The flow rate of the mobile phase was maintained at 1.3 ml/min. The linearity of the calibration curve was obtained in the concentration range of 2.5 to 20 µg ml-1 and coefficient of determination (R2) was found to be 0.9985. The % RSD value for intraday and interday precision was below 1 which indicated that the method was precise. Limit of detection and limit of quantification were 0.1 and 0.3 µg/ml respectively.

The structural formula is as shown:

This is the first line of choice in the management of diabetes in obese persons having good renal function. It suppresses excessive hepatic glucose production and improves glucose clearance, predominantly by decreasing fasting plasma glucose 1.

Unlike sulfonylureas, metformin does not produce hypoglycemia in either patients with type 2 diabetes or normal subjects and does not cause hyperinsulinemia.

In this context, a method for the analysis of metformin hydrochloride in bulk and pharmaceutical dosage forms by HPLC is needed.

Several methods have been reported for the determination of metformin by capillary electrophoresis 4, NMR spectrometry 5, spectrofluorometry 6, potentiometry 7, UV-visible spectrophotometry 8, conductometry9, voltammetry 10 and by HPLC in human serum11, 12. These methods are either complex, expensive, meant for plasma or do not use an internal standard. In this context, a simple, sensitive and economic reversed phase HPLC method has been developed and validated for the quantification of metformin hydrochloride in bulk and dosage forms.

As this method is quite sensitive it can be used to validate the cleaning of equipments like: double cone blender, mass mixer, tablet compression machine etc. after the manufacturing of metformin tablets. This method uses a commonly available reversed phase C-18 column with UV detector and phenytoin sodium has been used as an internal standard (IS) to minimize the errors of sample preparation.

Similarly phenytoin sodium, the internal standard, was also prepared by dissolving 20 mg of it in 100 ml methanol. To each of 0.125, 0.25, 0.5, 0.75, and 1.0 ml of metformin hydrochloride stock solution, 1 ml of phenytoin sodium stock solution was added and final volume was made to 10 ml with methanol. Thus the final concentration of metformin hydrochloride was made 2.5, 5, 10, 15, and 20 µg/ml respectively. The final concentration of internal standard was 20 µg/ml.

For the analysis of the tablet, twenty tablets were weighed separately and average weight was calculated. All the tablets were crushed by using mortar and pestle. Powder equivalent to 20 mg of metformin hydrochloride was weighed, dissolved in methanol for 15 minutes and volume was made to 100 ml with methanol. 8, 10 and 12 µg/ml of metformin was prepared from the tablet powder similar to the bulk described above and internal standard was also added to get a final concentration of 20 µg/ml.

Optimization of HPLC method: The HPLC method was optimized for the analysis of metformin hydrochloride in bulk and tablet dosage forms. Different mobile phases were tested to find the best condition to quantify metformin hydrochloride in bulk and dosage forms. Different ratios of methanol, acetonitrile, sodium lauryl sulfate and potassium dihydrogen phosphate were tried at different molarities and the optimum mobile phase was finalized.

Validation of the method: The method was validated by following the ICH14 and USP guidelines 15 for system suitability, linearity, accuracy, precision, specificity and limit of detection (LOD). The system suitability was checked by analyzing the repeatability of retention time, tailing factor and theoretical plates of the column. The robustness of the method was checked by deliberately changing the experimental conditions like: flow rate, mobile phase composition and temperature of the column. 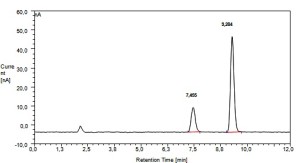 FIGURE 2: TYPICAL CHROMATOGRAM OBTAINED UNDER THE CONDITIONS DESCRIBED IN MATERIALS AND METHOD SECTION

Accuracy: As per the ICH guideline, accuracy is inferred once linearity, specificity and precision of the method are established 14. This approach was followed to establish the accuracy of the method and the method was found to be accurate.

Linearity: To evaluate the linearity of this method, five standard solutions covering the range of 2.5 to 20 µg/ml were analyzed using the method. The plot of peak area ratio of drug and IS against respective concentration of the drug was found to be linear in the range as shown in figure 3. The regression equation was found to be Y=0.3305X+0.1646 and the coefficient of determination R2 of the standard curve was found to be 0.9985. 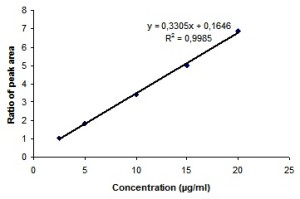 Specificity: Specificity is the ability to assess unequivocally the analyte in the presence of components which may be expected to be present 14. A mixture that contained metformin hydrochloride (10 µg/ml), phenytoin sodium (20 µg/ml), starch (0.6 µg/ml) and hydroxypropylmethylcellulose (0.6 µg/ml) was prepared and filtered (0.25 µm membrane filter) and 20 µl of it was injected. Separate excipient solutions were also injected. There were no interfering peaks of the excipients. Also, during the analysis of the drug in marketed tablet no interfering peaks were observed. This shows that the developed method is specific to the metformin hydrochloride and internal standard.

Repeatability: Repeatability expresses the precision under the same operating conditions over a short interval of time14. The relative standard deviation (RSD) of the peak areas of six replicate injections of a 10 µg/ml solution of metformin hydrochloride was calculated and it was found to be 0.31%. This small RSD value indicates the good precision under the same operating conditions.

Intermediate precision: The intermediate precision of the method was determined by the intra-day and inter-day variation of the results. Three concentrations- 8, 10 and 12 µg/ml of metformin hydrochloride respectively were analyzed in triplicate on three consecutive days. The % RSD of the concentration obtained was calculated within and in between days as shown in table 1. As the value is less than 1% in both the cases, the method was considered precise.

Robustness of the method: There was no marked change in the retention time of metformin hydrochloride by small variations like flow rate, pH, mobile phase ratio and temperature. This demonstrates that the proposed method was robust.

Stability: The stability of metformin hydrochloride in methanol was checked by determining the concentration of the solution after 48 hours at room temperature in comparison with the concentration at zero time. The result showed no marked variation and the RSD was less than 2% of the initial amount. This shows a good stability of metformin hydrochloride in methanol over a period of 48 hours at room temperature.

Limit of detection (LOD) and Limit of Quantification (LOQ): The lowest concentration of the drug that can be detected is expressed as a concentration that gives signal to noise ratio of 3:114.  The lowest amount of analyte that can be determined with acceptable precision and accuracy under the experimental condition or LOQ was measured in terms of signal to noise ratio of 10:1 14. The LOD and LOQ were found to be 0.1 µg/ml and 0.3 µg/ml respectively.

CONCLUSION: The HPLC method developed is accurate, precise, repeatable and specific. The method is linear over a wide range and utilizes a mobile phase which can be easily prepared. The column used is a widely available reversed phase C-18. This method is suitable for the routine quantification of metformin hydrochloride in bulk drug and in the tablet dosage forms.

ACKNOWLEDGEMENTS: The authors are thankful to the Laboratory for Pharmaceutical Analysis KU Leuven, Leuven, Belgium for providing the necessary facilities to conduct research work.

We would also like to acknowledge the support received from Erasmus Mundus Action 2 (EXPERTS II-2012) and Prof. Erwin Adams while conducting the research work.