Atorvastatin is a competitive inhibitor of the enzyme HMG-CoA reductase. Atorvastatin also reduces VLDL-C, serum triglycerides (TG), and Intermediate Density Lipoproteins (IDL), as well as the number of apolipoprotein B (apo B) containing particles, but increases High-Density Lipoprotein Cholesterol 21. Literature survey revealed that there is no reported HPTLC method for the in-vitro drug interaction of Mebendazole with Atorvastatin.

Hence, the aim and objective of the present work is the development and validation for the separation of Mebendazole and Atorvastatin and the application of the developed HPTLC method for protein binding based in-vitro interaction Mebendazole with Atorvastatin. Drug-drug interactions are pervasive in poly-drug prescription. Clinical case reports or studies are reported from time to time as evidence of interaction between drugs. Several studies explained such interaction at the molecular and enzyme level so that the relationship between clinical and experimental research shall be recognized. There are many approaches practiced for in-vitro drug interaction study such as metabolism-based, protein binding, etc. Protein binding plays a major role in the bioavailability of the drugs.

The extent of drug binding to plasma proteins, determined by measuring the free active fraction, has a significant effect on the pharmacokinetics and pharmacodynamics of a drug. 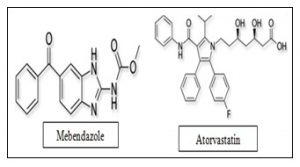 Preparation of Standard Stock Solution: About 2mg of Mebendazole and 4mg of Atorvastatin were accurately weighed and transferred to 50 ml of volumetric flask and sonicated for 20 minutes to dissolve the sample.

Then the volume was made up with methanol to obtain a concentration of 40μg/ml of Mebendazole and 80μg/ml of Atorvastatin.

Preparation of Phosphate Buffer pH 7.4: The Phosphate buffer was prepared by taking 62.5 ml of 0.2M potassium dihydrogen phosphate and added with 48.8 ml Sodium hydroxide. It was made up to 250 ml with distilled water.

Preparation of Bovine Serum Albumin Solution (1.5×10-4 M): The Bovine serum albumin (BSA) solution was employed for the estimation of protein binding of the drugs. To prepare 1.5×10-4 M BSA solution, 0.48g of BSA was dissolved in distilled water and made upto 50 ml.

Activation of Dialysis Membrane Tubes: The dialysis membrane tubes were cut into each 13cm length, and its activation was done by boiling the membrane for 2 h in 250ml of distilled water at 70 ºC (±5 ºC). The boiled membranes were washed thoroughly with fresh distilled water and utilized for the study.

Preparation of Standard Solution of Mebendazole (1.5×10-4 M): A quantity of about 4 mg of Mebendazole was weighed and dissolved in a sufficient volume of methanol with the aid of 15 min sonication and made up to 50 ml with the same to obtain 80μg/ml.

Preparation of Standard Solution of Atorvastatin (1.5×10-4 M): A quantity of about 8 mg of Atorvastatin was weighed and dissolved in a sufficient volume of methanol. It was made upto 50 ml with methanol to obtain a concentration of 160μg/ml.

Preparation of Standard Solution of Mixture (1.5×10-4 M): An accurately weighed quantity of about 4 mg Mebendazole and 8mg of Atorvastatin were transferred to a 50 ml volumetric flask. It was dissolved and mixed thoroughly in methanol by sonication for 20 minutes and made up to 50 ml with methanol.

Validation of HPTLC Method: The method was validated as per ICH guidelines, and parameters like linearity, range, the limit of detection, the limit of quantification, precision, specificity, stability studies were performed.

Limit of Detection (LOD) and Limit of Quantification (LOQ): LOD & LOQ were calculated in terms of signal-to-noise ratio. The estimation was done using a set of five calibration curves used to determine method linearity.

Where, σ= the standard deviation of y-intercepts of regression lines, S= the slope of the calibration curve.

Linearity and Range: The linearity of response was assessed by applying different volumes of stock solution viz, 2, 4, 6, 8, 10, 12μl on TLC plate to obtain linear concentration range of 0.04-0.24μg/ spot of Mebendazole and 0.08-0.48μg/spot of Atorvastatin. The spots were developed and evaluated densitometrically using the CAMAG HPTLC system. Peak areas were noted for each spot and plotted against their respective concentrations to get a linear graph.

Precision: The precision of an analytical procedure expresses the closeness of agreement between a series of measurements obtained from multiple sampling of the same homogeneous sample under the prescribed conditions. Precision may be considered at three levels: repeatability, intermediate precision, and reproducibility.

Intra-day Precision: Intra-day precision was studied by analyzing the standard drug of two different concentrations three times on the same day, and %RSD was calculated.

Inter-day Precision: Inter-day precision was studied by analyzing the standard drug of two different concentrations for three different days, and %RSD was calculated.

Repeatability of Sample Application: Repeatability of sample application was carried by spotting 6 times 10μl of drug solution on a pre-coated TLC plate followed by the development of plate and % RSD was calculated.

Repeatability of Sample Measurement: The repeatability of sample application was determined by spotting 10μl of drug solution on a pre-coated TLC plate and developed the plate and scanned six times, and % RSD was calculated.

Specificity: Specificity is the ability to assess the analyte in the presence of components that are expected to be present.

The peak purity of Mebendazole and Atorvastatin was assessed by comparing its respective spectra at three different levels, that is, peak start(S), peak apex(M), and peak-end (E) positions of the spot.

Stability Studies: When the developed chromatographic plate is exposed to the atmosphere, the analytes are likely to decompose. It is necessary to study the stability of the drug on a plate.

It was studied by scanning the plate at a different time interval, and peak areas were compared with the peak area of the freshly scanned plate. The % change in the peak areas was calculated.

Method Development and Optimization: The selection of solvent is done based on the drug solubility and stability.

Accordingly, methanol was selected as the solvent. Different mobile phase compositions were tried for development and Validation of Mebendazole and Atorvastatin in combination by HPTLC method.

Among these trial mobile phase systems, Ethyl acetate: Toluene: Methanol (5:4:1 v/v/v) was selected as the compact and dense spots were obtained with good separation.

A wavelength of 280nm was fixed for scanning the plates since the response was good at this wavelength. A standard densitogram obtained is given in Fig. 1. 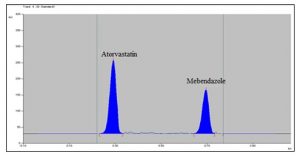 The calibration graph obtained for Mebendazole and Atorvastatin is shown in Fig. 2 & 3. Overlain densitogram is given in Fig. 4. 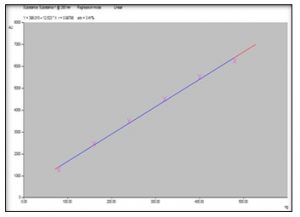 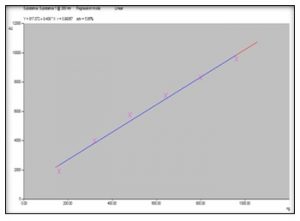 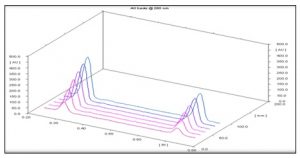 Limit of Detection (LOD) and Limit of Quantification (LOQ): LOD and LOQ of the mixture were found to be 0.01μg/spot and 0.04μg/spot for Mebendazole; 0.02μg/spot and 0.08μg/spot for Atorvastatin respectively shown in Table 1.

Precision: Intraday, interday, repeatability of the sample application and measurement was carried out, and the % RSD values were found to be less than 2 shows the precision of the method. The % RSD obtained is given in Table 2.

Specificity: The peak purity of both Mebendazole and Atorvastatin was assessed by comparing their respective spectra at peak start, peak apex, and peak end positions of the spot. The good correlation among the spectra acquired at the start (s), apex (m), and end (e) indicates the high purity of both drugs. It can be concluded that no impurities or degradation products migrated with the peaks obtained from standard solutions of the drugs.

Stability Studies: In the developed plate, Mebendazole was found to be stable for 15 min, and Levamisole was stable for 2 h.

Protein Binding Study of Mebendazole and Atorvastatin: About 2.5ml of 1.5×10-4 M Mebendazole solution and 1.5×10-4 M BSA solution were taken inside the previously activated dialysis membrane tubes and sealed. The tubes were immersed in 30ml of phosphate buffer taken in measuring cylinders. The samples were taken in replicates, and all the measuring cylinders were placed in a mechanical shaker at 40rpm for a sufficient period of time to complete dialysis.

Assessment of Protein Binding and Displacement Interaction Study: The in-vitro displacement interaction study was carried out for Mebendazole in the presence of its interacting drug Atorvastatin. About 2.5 ml of a standard solution of a mixture containing 1.5×10-4 M Mebendazole and 1.5×10-4 M Atorvastatin along with 1.5×10-4 M BSA were added to the previously activated dialysis membrane tubes and sealed. The tubes were immersed in 30ml of phosphate buffer taken in measuring cylinders. The samples were prepared in replicates, and all the measuring cylinders were placed in a mechanical shaker at 40rpm for a sufficient period to complete dialysis. The samples withdrawn from the buffer compartment at regular intervals were analyzed using the newly developed HPTLC technique. The results obtained are given in Table 3.

TABLE 3: RESULTS OF IN-VITRO INTERACTION STUDY OF MEBENDAZOLE AND ATORVASTATIN

The chromatograms were recorded, and the concentration of unbound drug was determined by calculating peak area ratios with the standards. The percentage of protein binding (F) was calculated as follows:

The densitogram of Mebendazole and Atorvastatin admixture after equilibrium dialysis study for 6 h is given in Fig. 5. 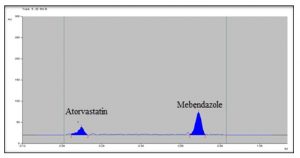 CONCLUSION: So far, no in-vitro interaction methods have been reported for the interaction of Mebendazole with Atorvastatin. Hence, this method was successfully employed for protein binding based in-vitro evaluation study of the same. From the protein binding study, a significant displacement was observed for Mebendazole and Atorvastatin. Hence their concomitant use should be avoided since it may lead to anaphylaxis and other severe hypersensitivity reactions. The immediate medical intervention of drug discontinuance is required if anaphylaxis of hypersensitivity reaction occurs. However, further in-vitro studies in animals and humans are requested for clinical decision making, choosing the appropriate treatment requirement, and eliminating drug-related problems. HPTLC methods developed were validated as per ICH guidelines and found to be specific, accurate, and precise. The newly developed HPTLC method might be an alternative step forward compared to the analytical methods available