Chemicals and reagents: The Naproxen sodium and Sumatriptan succinate working standards were obtained as a gift sample from Sun Pharmaceuticals Ltd. Vadodara, Gujarat. The formulation, tablet with combination of Naproxen sodium 500 mg and Sumatriptan succinate 80 mg is available in market by brand name TREXIMET; methanol and formic acid were of Qualigens; pre-coated silica gel 60 F254 HPTLC plates (Merck # 5548) of E-Merck. All dilutions were performed in standard volumetric flasks.

Instrumentation and chromatographic conditions: Chromatography was performed on pre-coated silica gel 60 F254 HPTLC plates (Merck# 5548). Before use they were pre-washed with methanol and dried in an oven at 105oC for 2 h. 10 μL of sample were spotted 8 mm from the edge of the plates by means of a Camag Linomat IV sample applicator. The plates were developed to a distance of 85mm in a Camag twin-trough chamber previously equilibrated 15min with mobile phase i.e. methanol, distilled water, Formic acid  in the volume ratio of 0.5:7.5:0.1 (v/v) methanol: distilled water: formic acid. The chromatographic conditions had previously been optimized to achieve the best resolution and peak shape. Plates were evaluated by densitometry at Lambda max 230 nm with a Camag Scanner II, in conjunction with CATS software for quantitation. The typical chromatogram is shown Figure 1. 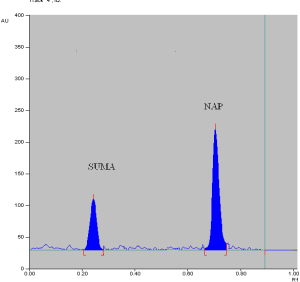 Preparation of sample solution: Twenty tablets (TREXIMET) were weighed and the average weight was calculated. The tablets were crushed to furnish a homogeneous powder and a quantity equivalent to one tablet was weighed in a 100 mL standard volumetric flask. The powder dissolved in distilled water and diluted up to the mark with distilled water. That solution was then sonicated for 30 min. Then cooled to room temperature and diluted with distilled water. The solution was filtered through Whatmann No. 41 filter paper and the filtrate was used as sample solution.

Linearity: Seven different concentrations of mixture of Naproxen sodium, Sumatriptan succinate were prepared from stock solution of Naproxen sodium (1000 μg/mL) and Sumatriptan succinate (1000 μg/mL) in the range of 200-1200 ng/spot and 100-1000 ng/spot respectively, in distill water to obtain desire linearity range. The detector response to the different concentrations was measured. The drug peak-area was calculated for each concentration level and a graph was plotted of drug concentration against the peak area. This experiment was carried out thrice and the mean peak area response was used for the calculations. The data were analyzed by linear regression least-squares fitting. The statistical data obtained are given in Table 1.

Assay (from the pharmaceutical preparation): 10 μL working standard solution and sample solutions were spotted on the plate and the plate was developed and evaluated as described above. The procedure was repeated five times, individually weighing the tablet powder each time. The densitometric responses from the standard and sample were used to calculate the amounts of the drug in the tablet. The results obtained are as shown in Table 2.

TABLE 2: ANALYSIS OF NAP AND SUMA IN FORMULATIONS BY PROPOSED METHOD (N=6)

Recovery studies: The accuracy of the experiment was established by spiking pre-analyzed sample with known amounts of the corresponding drugs at three different concentration levels i.e. 20, 40 and 60 % of the drug in the tablet (the external standard addition technique). The spiked samples were then analyzed for five times. The results from recovery analysis are given in Table 1 the mean recovery is within acceptable limits, indicating the method are accurate.

CONCLUSION: As the proposed method is highly accurate, selective and precise hence can be used for a routine quality-control analysis and quantitative simultaneous determination of Naproxen sodium and Sumatriptan succinate in pharmaceutical preparations. The method is also fast and requires approximately 40 min for analysis.