ABSTRACT: High performance thin layer chromatographic method has been developed for the determination of Olopatadine (OLO) and Montelukast (MONT) in their combined dosage form. Merck HPTLC aluminum plates of silica gel G60 F254, (10 × 10 cm) was used for separation of combined with 250 μm thickness using Chloroform: Ethyl acetate: Methanol: Triethylamine (6: 4.5: 2.5: 0.8, v/v/v/v) as mobile phase. HPTLC separation of the both drugs were carried out and followed by densitometric measurement was performed in the absorbance mode at 254 nm. The drugs were resolved satisfactorily with Rf values of 0.39 ± 0.01 and 0.66 ± 0.01 for OLO and MONT, respectively. The developed method was validated in terms of accuracy, precision, linearity, limit of detection, limit of quantification and robustness. The developed HPTLC method can be applied for identification and quantitative determination of OLO and MONT in bulk drug and drug formulation.

INTRODUCTION: Montelukast sodium is described chemically as [R-(E)]-1-[[[1-[3-[2-(7-chloro-2 quinolinyl) ethenyl] phenyl]-3-[2-(1-hydroxy-1-methylethyl) phenyl] propyl] thio] methyl] cyclopropane acetic acid, monosodium salt. Montelukast is a leukotriene receptor antagonist (LTRA) used for the maintenance treatment of asthma and to relieve symptoms of seasonal allergies. It is usually administered orally. Montelukast is a CysLT1 antagonist and it blocks the action of leukotriene D4 on the cysteinyl leukotriene receptor CysLT1 in the lungs and bronchial tubes by binding to it. This reduces the bronchoconstriction otherwise caused by the leukotriene and results in less inflammation 1-2

The chemical structure of MONT is shown in Fig.1. Olopatadine hydrochloride, chemically, 11-[(Z)-3-(Dimethylamino) propylidene] – 6 - 11-dihydrodibenz [b, e] oxepin-2-acetic acid hydrochloride is a dibenzoxipine derivative used for systemic treatment of allergic rhinitis, urticaria, and bronchial asthma. It is a histamine H1 receptor-antagonist and is used as an antiallergic and anti-inflammatory agent 3-4. The chemical structure of OLO is shown in Fig.2. 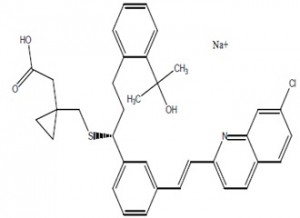 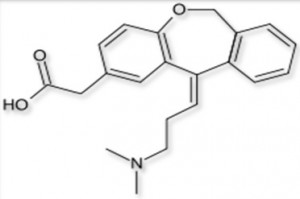 So, it was thought of interest to develop simple HPTLC method for Montelukast sodium and Olopatadine in combined dosage form which is high accurate, reproducible, economic and having good retardation factor.

Montelukast Sodium was obtained as a gift sample from Zydus cadila, (Ahmedabad) and Olopatadine was obtained as a gift sample from Ami life science (Baroda). Methanol AR grade was purchased from Merck Lab. and Qualigens Fine Chemicals Pvt. Ltd., India. The HPTLC instrument used was Camag HPTLC with Linomat-5 injection and camag TLC scanner-3. All the apparatus and instruments used were calibrated and validated.

Before analysis HPTLC plates of silica gel G60 F254 were cleaned by pre-development with methanol and activated at 1100C for 5 min for solvent removal. The sample Solutions of MONT and OLO were spotted to plates (10 x 10 cm) by means of a Linomat-5 automatic spotter equipped with a 100 microlitre sample syringe and operated with settings of band length, 6mm; distance between bands, 10 mm; distance from the plate edge, 10 mm; and distance from the bottom of the plate, 10 mm. The plate was developed in a twin trough chamber previously saturated for 30 min with the mobile phase, Chloroform: Ethyl acetate: Methanol: Triethylamine (6: 4.5: 2.5: 0.8, v/v/v/v). The source of radiation used was a deuterium lamp emitting a continuous UV spectrum between 200 and 400 nm. All determinations were performed at ambient temperature with a detection wavelength of 254 nm.

Mixed stock solution of MONT (2000 μg/ml) and OLO (1000 μg/ml) stock were prepared by weighing accurately 20 mg MONT and 10 mg of OLO powder into 2 separate 10 ml volumetric flasks; 5 ml methanol was added, shaken for a few minutes, and diluted to volume with methanol to obtain a mixed working standard solution of MONT (2000 μg/ml) and OLO (1000 μg/ml). Each concentration were spotted five times on the HPTLC plate. The plate was then developed using mobile phase as described above. The peak areas were plotted against the corresponding concentrations to obtain the calibration graphs. Linear calibration curves were generated using leastsquares linear-regression analysis as shown in Fig. 3 and 4.

Prepare the physical mixture as described in literature. Take 50 mg of olopatadine and 100 mg of montelukast and add required excipient to form physical mixture. Dissolve in 5 ml methanol and place it for sonication for 20 minutes. Filter and make up volume upto 10 ml with methanol. From this solution take 1.6 ml of sample solution in 10 ml volumetric flask and make up volume upto 10 ml with methanol and carefully centrifuged at 4000 rpm for 15 min. It was filtered through vacuum filter using Whatman filter paper (No.41). The above solution containing 1600 μg/mL of MONT and 800 μg/mL of OLO. The plate was developed in the previously described chromatographic conditions. The peak area of the spots were measured at 254 nm for OLO and MONT, respectively and the concentrations in the samples were determined using multilevel calibration developed on the same plate under the same conditions using linear regression equation as shown in Fig.6.

The Calibration curves were constructed over the concentration range of 600 - 1000 μg/mlof OLO and 1200-2000μg/ml for MONT. Accurately prepared standard solutions of MONT and OLO were applied to the plate. Developed plates were subjected to densitometric measurements in absorbance mode at wavelength 254 nm using Camag TLC Scanner 3 and 3D image of linearity overlain were obtained as shown in Fig. 5. 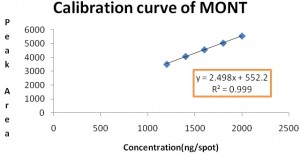 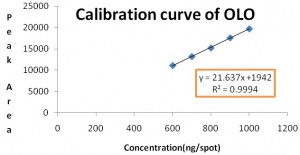 The precision of an analytical method is the degree of agreement among individual test results when the method is applied repeatedly to multiple samplings of homogenous samples. It provides an indication of random error results and was expressed as coefficient of variation(CV).

Accuracy may often be expressed as percentage recovery. It was determined by calculating the recovery of OLO and MONT by application of the analytical method to mixtures of the drug product contents to which known amount of analyte have been added within the range of the method.

The L.O.D. was estimated from the set of 5 calibration curves.

S.D. = Standard deviation of the Y- intercepts of the 5 calibration curves.

LOD of OLO and MONT were described in Table

The L.O.Q. was estimated from the set of 5 calibration curves.

S.D. = Standard deviation of the Y- intercepts of the 5 calibration curves.

Slope = the mean slope of the 5 calibration curves.

LOQ of OLO and MONT were described in Table 1

RESULT AND DISCUSSION: A new HPTLC method has been developed for simultaneous estimation of Olopatadine and Montelukast sodium in its combined dosage form. The method was found to be linear concentration range of 600 - 1000ng/spot and1200 – 2000 ng/spot for OLO and MONT respectively. Prepared synthetic mixture was analyzed and amount of drug determined by proposed method as shown in Table 1. The proposed method was validated as per ICH guideline. The accuracy of method was determined by calculating mean percentage recovery. It was determined at 80, 100 and 120 % level. The % recovery obtained were 99.3646 ± 0.5494 for OLO and 100.2041 ± 0.2874 for MONT. Precision was calculated as repeatability (% RSD is less than 1.0) and inter and intraday variations (%RSD is less than 1.0) for both drugs.

TABLE 1: SUMMARY OF VALIDATION PARAMETERS FOR THE PROPOSED METHOD