n-octacosanol is a normolipidemic aliphatic primary alcohol obtained from the plant Tinospora cordifolia Miers. In the present study, the plant stems were collected from five accessions namely Anniyalam, Chennai, Hassan, Vishakhapatnam and Bangalore between June and August. Later a simple HPTLC method has been established for determination of n-octacosanol in methanolic extracts of all these geographical sources using Toluene: Ethyl acetate: Formic acid (4.5:4.5:1 v/v) as mobile phase. Detection and quantification were performed by densitometric scanning at λ = 555 nm. The results of HPTLC estimation showed variation in n-octacosanol content in all the accessions. The extract from Anniyalam accession showed significantly higher amount of n-octacosanol (6.54%) and that of Vishakhapatnam showed the least (2.28%). Thus the present work is helpful in selecting Tinospora cordifolia yielding highest percentage of n-octacosanol.

The plants collected from different geographical sources have shown similar morphological characters but difference in content of secondary cell constituents because of different environmental conditions. Hence, in the present study, an attempt was made to select an appropriate genotype that produces maximum amount of n-octacosanol. This leads to the production of plants with better market value. Hence, it is very essential to select the correct accession for the particular usage and for further cultivation.

Preparation of plant extracts: The stems were washed, dried under shade and around 50g from each accession were powdered to pass through 40-mesh sieve. The drug was extracted with methanol (100ml x 3) over steam water bath for 3-hours. After cooling, the solvent was removed on a rotary vacuum evaporator. The extracts were stored in desiccators and protected from the light.

Reference standard preparation: 2.00 mg of standard n-octacosanol as reference compound procured from Natural Remedies Pvt. Ltd. Bangalore was accurately weighed in an electronic balance (Afcoset) and dissolved in 1ml chloroform and 3ml methanol, sonicated for 5-10 min. This solution was used as reference solution for HPTLC analysis.

Test solution preparation: 25 mg of all the extracts were weighed separately, dissolved in methanol and sonicated. Filtered solutions were then used as test solutions for HPTLC analysis.

Development: The samples applicated plate was kept in TLC twin trough developing chamber (after saturating with solvent vapor) having Toluene: Ethyl acetate: Formic acid (4.5: 4.5: 1) as mobile phase (n-octacosanol) and the plate was developed in the respective mobile phase up to 80mm.

Derivatization: The developed plate was sprayed with ANS spray reagent. Before scanning, plates were heated for 5 min in oven at 105°C in hot air oven.

Scanning: Densitometric scanning of the plate was performed at λ = 555 nm using a Camag Scanner III in absorbance mode with tungsten lamp in conjunction with WINCATS software for quantification. Slit dimension was 10.00 mm X 0.90 mm.

Detection: Blue colored band at 555nm was present in the tracks, it was observed from the chromatogram after derivatization, which confirmed the presence of n-octacosanol in all the samples.  The Peak table, Peak display and Peak densitogram were noted. The amount of n-octacosanol in test samples was determined according to the formula. 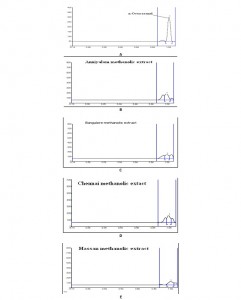 FIG. 1: HPTLC CHROMATOGRAM OF (A) n-octacosanol, methanolic extracts from the stems of Tinospora cordifolia from (B) Anniyalam (C) Bangalore (D) Chennai (E) Hassan and (F) Vishakhapatnam 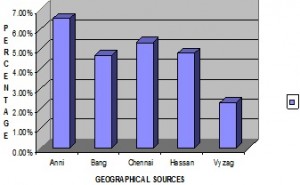 CONCLUSION: n-octacosanol is an important high molecular weight primary fatty alcoholic compound in Tinsopora cordifolia Miers. A TLC densitometric HPTLC method for the quantification of this compound in methanolic extracts of accessions of Tinospora from various geographical sources has been established. The highest percentage of n-octacosanol was found to be present in Anniyalam accession. The method was found to be simple and sensitive. Thus, it can be used in routine quality control of herbal materials as well as formulations containing n-octacosanol and the present work is helpful to select an appropriate genotype of Tinospora cordifolia producing maximum amount of n-octcosanol.