ABSTRACT: Genus Curcuma L. ( Zingiberaceae), comprising of 120 species, is distributed throughout South and South-East Asia, with few species extending to China, Australia, and South Pacific. Four species of Curcuma are reported from Melghat.  Of these C. longa L. is cultivated while C. inodora Blatt., C. pseudomontana J. Graham and C. decipiens are wild.  C. decipiens being rare could not be collected. Curcuma inodora Blatt. Known as ‘Jangali Halad’ is a common herb of Melghat at higher elevations.  In the Melghat area, populations of C. inodora are found to show many distinct variations in aerial as well as underground characters. Twelve distinct variants of C. inodora and C. pseudomontana and C. longa were collected. HPTLC screening of free amino acids showed the presence of four to eleven amino acids in Curcuma inodora accessions, while in C. pseudomontana and C. longa, ten amino acids each were found. Glycine and Proline were found in all samples studied. Amino acid composition is specific for each species and variants; hence can be used as identifying character. HPTLC screening of amino acids reflects the distinctness as well as relatedness of the species.

INTRODUCTION: Genus Curcuma L. (Zingiberaceae) comprising of 120 species and is distributed throughout South and South-East Asia, with a few species extending to China, Australia, and the South Pacific. Four species of Curcuma are reported from Melghat 1, 2.  Of these C. longa L. is cultivated while C. inodora Blatt. C. pseudo-montana J. Graham and C. decipiens are wild. C. decipiens being rare, could not be collected. C. inodora is widely distributed throughout Maharashtra and is very common and abundant in Melghat. It is commonly called ‘Jangli halad’ and used in traditional medicine by locals.

Fresh rhizome paste is applied over the cut as a strong antiseptic. The smoke of dried rhizome is used to hypnotise the person; some use it in Tantrik, Vashikarana and Mayajal Kriyas 3. Paste of root stock is applied in glandular diseases and piles 4, 5, 6, psychosomatic disorders, and constipation 7, 8. C. pseudomontana is used in traditional medicine to cure jaundice and diabetes 9, body swellings, and increased lactation 10. Fresh tubers are eaten as blood purifiers 11.

The dried rhizome of Curcuma longa L. has been a rich source of beneficial phenolic compounds known as curcuminoid 12, 13. It is used in several ways in Ayurveda and traditional medicine the world over. Amino acids are primary metabolites, occurring in plants both in the Free State and as the basic unit of proteins. HPTLC method is most suitable as separation is faster, more efficient, and results are more reliable and reproducible. In combination with digital scanning HPTLC also provides accurate and precise Rf values 14.

The present attempt has been made to analyze free amino acids in methanol extract of Curcuma species through HPTLC.

Sample Preparation: 500 mg of each sample was extracted with 5 ml methanol by sonication for 30 min. Then these solutions were filtered and filtrate used for chromatography.

Chromatography: 15 standard amino acids and sample solutions were used for HPTLC analysis. Standard amino acids were run to determine the Rf for reference. Then 14 sample solutions and a mixture of standard 5 amino acids were run simultaneously on single plate. Likewise, all samples were run with all standard amino acids (in a batch of five) using n–Butanol: Acetic Acid: Water (60: 1.5: 25 v/v/v) as solvent system. 2 μl of the standard solution and 5 μl of sample solution were loaded as 8 mm band length on Cellulose F TLC plates using Hamilton syringe with the help of Linomat 5 applicator attached to CAMAG HPTLC system, which was programmed through Vision CATS server-PH, version 2.5.18262.1 software. After the application of spots, chromatogram was run in TT chamber (Twin –Trough chamber) pre-saturated with the mobile phase. The air-dried plates were kept in CAMAG Visualizer, and images were captured in white light, UV 366 nm, and UV 254 nm light. The chromatograms were scanned by a CAMAG TLC Scanner after spraying with ninhydrin reagent and dried at 100°. Rf values were recorded by Vision CATS server-PH, version 2.5.18262. Best results were obtained in white light.

Variants of C. inodora selected for screening were coded as CI-1, CI-2, CI-3, CI-4, CI-5, CI-6, CI-7, CI-8, CI-9, CI-10, CI-11, and CI-12 and Curcuma pseudomontana coded as CP-13 and Curcuma longa as CL-14 Photoplate -1. Extracts of all samples were run along with the mixture of standard amino acids as mentioned in methodology. Since amino acids are very sensitive minor differences also result in changing the Rf. Therefore every time, along with sample extracts mixture of five standard amino acids was run. Specific amino acids were identified with reference to the standard. Amino acid composition of all samples is presented in Table 1 and HPTLC photoplates Photoplate no. 2 to 5. 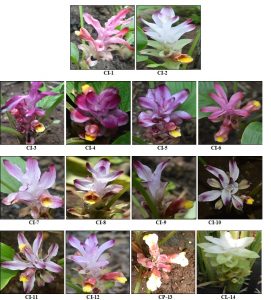 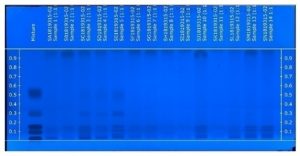 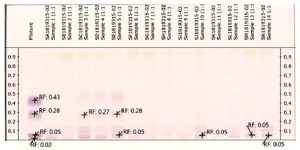 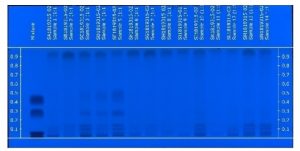 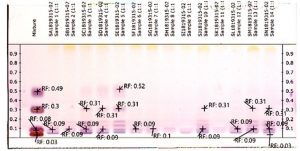 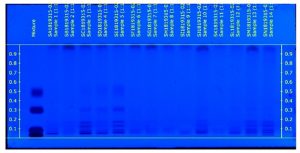 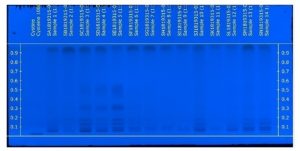 The amino acid profile of a species is a taxonomically important character. The profile reflects the distinctness as well as relatedness of the species. Variants CI-3 and CI-5 contain a maximum number of amino acids, i.e., 11 while, CI-12, CP-13, and CL-14 all contain 10 amino acids each, though there is a difference in amino acid profile composition. CI-2 shows only 4 amino acids. Glycine and Proline are found in each sample. They characterize the Curcuma species studied.

CONCLUSION: All the three Curcuma species, including variants, are taxonomically characterized by the presence of Glycine and Proline, while other amino acids present characterize particular species and variants. Variants of C. inodora are quite distinct as far as the amino acid profile is concerned; they possibly represent further evolutionary lines within the species.

ACKNOWLEDGMENT: Authors are thankful to the Director, Biodiversity Board, Maharashtra State, Nagpur, and Chief Conservator of Forest Melghat, Tiger Project, Amravati, for their permission to field visits and required sample collection outside the reserve area. They are also thankful to Dr. Gaganjyot Kaur, NFB, Khalsa College, Mumbai her help in HPTLC studies.