ABSTRACT: Background: Alzheimer's disease (AD) is the most common type of dementia, which represents one of the major difficult challenges for drug discovery. Currently, 62% of the people are suffering from Alzheimer's disease around the world is expected to reaching 131.5 million people, and this will reach 71% by 2050. So far, only five drugs have been registered for the treatment of AD, including four acetylcholinesterase (AChE) inhibitors (AChEIs). None of these agents have shown a clear benefit to AD patients. There is no single treatment for this disease, which puts forth the need to identify new therapy to control and treat this fatal condition. Although, there are a lots of currently available inhibitors for acetylcholinesterase but there is no selective potent inhibitor for AD. Objective: The main focus of the current study was to investigate the inhibitory activity of isolated phytochemicals of Sonchus wightianus plant origin within the human acetylcholinesterase (AChE) enzyme to identify a new class of acetylcholinesterase inhibitors (AChEI). Materials and Methods: The ligand data set was selected from an isolated phytochemical constituent of Sonchus wightianus of Nepal origin. The X-ray crystal structure of a Human AChE was retrieved from Protein Data Bank (PDB: 1B41). Molecular docking studies were performed by using Discovery Studio 2.1. Results: All the docked compounds exhibited fitness scores with a range of 108.437 to 81.813, as compared to known AChE inhibitor Donepezil 111.596. Among them, compound 3 having the highest fitness score and two hydrogen bond interactions with the SER435 amino acid residue of the active site pocket of AChE.

Alzheimer's disease (AD) is the most common type of dementia, which represents one of the major difficult challenges for drug discovery 2.

According to World Alzheimer Report 2018, the number of people living with dementia around the world is expected to almost double every 20 years, reaching 131.5 million people, particularly in developing countries like India, Brazil, and China 62% of people with dementia already, this will reach 71% by 2050 3.

The pathogenesis of AD is associated with a lack of acetylcholine (ACh), a neurotransmitter in the brain. The levels of ACh are continuously regulated by the hydrolytic enzyme acetylcholinesterase (AChE), which rapidly degrades ACh both in the periphery and the brain 4-6. Besides it, acetylcholine also inhibits the release of cytokines by the cholinergic anti-inflammatory pathway, which is known as cholinergic. The abnormal cholinergic system is associated with mental impairment, and a series of loss of cholinergic function in the central nervous system contributed to cognitive symptoms 7, 8.

To date, five drugs have been registered for the treatment of AD, including four acetyl-cholinesterase (AChE) inhibitors (AChEIs) (i.e., donepezil, tacrine, galantamine, and rivastigmine) and an N-methyl-Daspartate (NMDA) receptor antagonist (i.e. memantine) 9, 10. None of these agents have shown a clear benefit to AD patients. Even though acetylcholinesterase inhibitor (AChEIs) can directly inhibit cytokines' production by microglia and monocytes. Hence, it may be reasonable to consider that the efficacy of AChEIs is, at least in part, because of the anti-inflammatory effects. It is now generally accepted that the effect of AChEIs can be achieved by enhancing the transmission of acetylcholinesterase drug neurons to neurons. The imbalance between the generation and removal of amyloid-β (Aβ) is an early and often incipient factor in AD 11, 12. No new treatment has been approved for AD since 2003 and more than 200 drug candidates have not succeeded in advanced clinical trials, including both small molecules and immunotherapeutics, either due to lack of efficacy or unacceptable toxicity.

From the last few decades, AD remains one of the problems world-wide and no cure for AD, suggesting that new therapies and treatments are urgently needed 13. Although there are many currently available inhibitors for acetylcholi-nesterase, there is no selective potent inhibitor for AD. It is a high demand for further characterization of available tool compounds to explore both selectivity and key protein-ligand interactions using new Alzheimer's disease inhibitors as well. Molecular docking is a method that predicts the orientation of one macromolecule of protein to the synthesized ligand when bound to each other, hence forming a stable complex at atomic level 14. In fact, the drug discovery program is oriented in the direction of the search for lead structures, and thus virtual screening/ molecular docking program constitutes a great tool to find a hit that further undergoes limited optimization to identify the promising lead molecule. By taking this, our present study initiates a docking methodology to predict the plausible modes of interaction of the potent phytochemicals from plant origin within the human Acetylcholinesterase enzyme to identify a new class of acetylcholinesterase (AChE) inhibitors.

Protein Preparation: The X-Ray crystal structure of a Human Acetylcholinesterase (AChE) was retrieved from Protein Data Bank (PDB: 1B41) with a resolution of 2.76 Å, R-value of 0.219, and R free value of 0.265. The preparation of protein was done by using Discovery Studio 2.1 software. In the first step, the protein preparation protocol of Discovery Studio (DS) was used to prepare the protein structure. Hydrogen atoms were added to the protein structures corresponding to a pH value of 7.4. The water molecules and the hetero atom were removed before the docking study. Then the protocol performs protein structure refinement that corrects their bond orders, modeling missing loop regions, inserting missing atoms in incomplete residues, deleting alternate conformations, standardizing names of the atoms, and protonating titratable residues. Finally, all-atom restrained energy minimization of the protein structure was carried out using CHARMm force field with steepest descent algorithm followed by conjugant gradient algorithm until the convergence gradient satisfied with a root mean square deviation (RMSD) tolerance of 0.01 Å. After energy minimization, Using Define and Edit Binding Site tools in DS, the active site of the protein were selected based on the bound ligand benzamidine confirmation, and an active site sphere was defined with a radius of 10 Å Fig. 1. 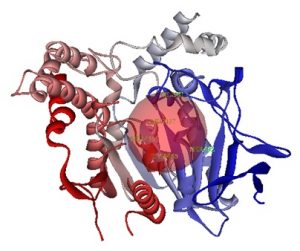 The chemical structures of the compounds were sketched using the ChemDraw tool of PerkinElmer ChemOffice Ultra14.0 software 15and saved in mol2 format. These ligands were then subjected to prepare ligands protocol of DS. They were converted from 2D to 3D structures by including stereochemical, ionization, tautomeric variations, as well as energy minimization and optimized for their geometry, desalted and corrected for their chiralities and missing hydrogen atoms. The bond orders of these ligands were fixed, and the charged groups were neutralized.

The ionization and tautomeric states were generated between pH of 6.8 to 7.2. In the final stage of Ligand preparation, compounds were minimized using CHARMm force field until a root mean square deviation of 0.01 was achieved. The steepest descent algorithm was used for minimization, followed by the conjugate gradient method. A single low energy confirmation per ligand was generated, and the optimized ligands were used for docking analysis.

FIG. 2: STRUCTURES OF ISOLATED PHYTOCHEMICALS USED IN THE DOCKING STUDIES

The ligand poses are placed into the polar and apolar receptor interactions site. A polar hotspot is preferred by a polar ligand atom (e.g., a hydrogen bond donor or acceptor), and an apolar hotspot is preferred by an apolar atom (e.g., a carbon atom). The protocol allows the user to specify several modes for generating ligand conformations for docking. Scoring function of the LibDock 18 calculates the binding affinity score or docking score (LibDock score) of protein-ligand complex.

Also the possible binding energies, possible hydrogen bonding and various interaction poses are calculated. The top-ranked docked complexes of each compound are selected on the basis of LibDock Score. Binding poses with highest LibDock Score and lowest binding energy are preferred as the best pose and further binding interactions of the best pose for each compound are analyzed.

In-silico Molecular Docking Studies: In 2011, Susan Joshi and co-workers reported isolation of title compounds from Sonchus wightianus of Nepal origin 19. Recently, Sriramya Gade et al., reported AChE inhibitory activity of hexacosanol 20. Molecular docking has huge applications in drug discovery and development. Accordingly, to understand the ligand orientation and the inhibitory ability towards human AChE, we initially carried out docking of the title phytochemicals and later with the known AChE inhibitor Donepezil. Binding affinity evaluation and inhibitory potential of these compounds were measured through LibDock docking score and H-bond interactions. Of all the conformations generated for each compound, the compound with the highest LibDock score is taken for interaction analysis of the hydrogen bonding. All the compounds were show different interactions with different residues of the active site. The hydrogen bond interaction is significant for the bioactivity of compounds. 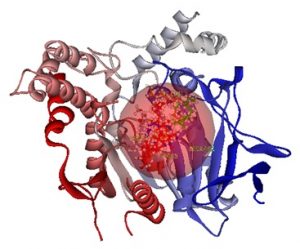 The stability of the best-docked pose of these compounds was evaluated by determining the hydrogen bonding interactions of the protein with compounds, which revealed the critical amino acids involved in hydrogen bond formation. The high LibDock score of the ligand pose with the least binding energy was taken into account for the prediction of the best ligand binding conformation. Apart from hydrogen bonding interactions, other non-bonded interactions like hydrophobic bonding were also observed. The binding pattern of selected candidate compounds on the human AChE binding site has shown in Fig. 3. The detailed summary of LibDock score and ligand interaction data revealed through molecular docking of title compounds, and Donepezil on human AChE were tabulated in Table 1. All the docked compounds exhibited fitness scores with a range of 108.437 to 81.813, as compared to Donepezil 111.596.

CONCLUSION: In summary, to investigate the inhibitory activity of isolated phytochemicals 1, 2, 3 and 4 of Sonchus wightianus plant within the human acetylcholinesterase (AChE) enzyme. All the docked compounds exhibited fitness scores with a range of 108.437 to 81.813, as compared to known AChE inhibitor Donepezil 111.596. Among all, compound 3 was shown highest fitness score (108.437), create two hydrogen bond interactions with SER435 amino acid residue and two close contacts with LEU435, GLU81 amino acid residues of active site of AChE which confirms their high inhibitory potency. These results might be useful for pronouncement of new class of AChE inhibitors as lead compounds towards invention of effective drugs for AD therapy.

ACKNOWLEDGEMENT: We are grateful to the Head, Department of Botany, Osmania University for providing the necessary laboratory facilities.