INTRODUCTION: Oral drug delivery system is the most desirable, preferable and suitable route for the administration of therapeutic and pharmaceutical agents for administration. Oral sustained release drug delivery systems are formulated to release active ingredient gradually and predictably over a long period and is successful in overcoming the limitations of conventional therapy 1.

The purpose for design sustained and controlled delivery system is to decrease the dosing rate or to increase the drug efficacy by localization at the site of action, dropping the dose necessary, or provide consistent drug delivery 2. It should be able to attain optimal therapeutic drug concentration in the blood with minimum variation, improving therapy, safety, efficacy and patient compliance 3.

Targeting of drugs specifically to the colon is advantageous in the treatment of diseases such as amoebiasis, Crohn’s disease, ulcerative colitis, and colorectal cancer. In addition, it has shown great potential in the oral delivery of therapeutic peptides and proteins, which are unstable in the upper part of the gastrointestinal (GI) tract.

The colonic region is recognized as having less diversity and intensity of enzymatic activities than stomach and small intestine 4. Various strategies are available for targeting drug release selectively to the colon 5. The designing of prodrugs is based on the concept of preventing the release of drugs in the stomach and small intestine and drug release is triggered by the use of specific property at the target site such as altered pH or high activity of certain enzymes in comparison to nontarget tissues 6, 7. Hydrogels have distinctive swelling behaviour, which extensively dictates the pattern of drug delivery. By controlling little crucial aspect such as polymer concentration, composition, initiator and cross-linker nature and concentration, which direct density and degree of cross-linking hydrogel properties, can be ideally modified for their desired application. Chemical and physical connections are vital for the improvement of enviable interfacial strength 8.

Rabeprazole sodium, 2-{[4-(3-methoxypropoxy)-3-methyl-pyridine-2-yl] methyl sulfinyl}-1H-benz-imidazole, belongs to a class of proton-pump inhibitors (PPIs). It suppress gastric acid secretion by specifically inhibiting the H+/K+-ATPase enzyme system at the secretory surface of the gastric parietal cell 9. Clinically, rabeprazole is used to heal, relieve symptoms and prevent a relapse of acid-peptic diseases, such as duodenal, gastric and oesophageal ulceration 10. Of all PPIs tested, rabeprazole was the most potent acid inhibitor during the first day of dosing 11. Like other PPIs such as omeprazole and lansoprazole, when exposed to acidic or neutral environments, rabeprazole is converted to several components at a faster rate 12. Rabeprazole undergoes pre-systemic and mainly non-enzymatic metabolism that contribute to an absolute bioavailability of about 52% after oral administration of a 20 mg dose 13.

Sodium alginate (SA) is composed of 1,4-linked-b-D-mannuronic acid and a-L-guluronic acid residues, used as a gelling agent in food industry and has a property of undergoing gelation in the presence of cations. In ionic gelation, the exchange of sodium ions occurs with the cations in the external media. SA can also be crosslinked covalently using glutaraldehyde. Such a crosslinked alginate is valuable in the controlled release of drugs 14 - 16. Carrageenans (CG) have high molecular weight, linear heteropolysaccharides extracted from marine algae Rhodophyceae. These consist of sulfate esters of galactose and 3, 6-anhydrogalactose copolymers, linked by alternating a-1,3 and b-1,4 glycosidic linkages 17. Carrageenans have also been used in controlled release technology 18 - 20.

Preparation of Rabeprazole Sodium Hydrogel Beads: The hydrogel beads of Rabeprazole sodium were prepared by ionotropic gelation technique according to the formula given in Table 1. Accurately weighed drug was added to 100ml of distilled water and stirred on magnetic stirrer. HPMC K4M and sodium alginate were then to the solution and stirring continued till uniform polyelectrolyte solution was formed. Calcium chloride was separately dissolved in 100 ml water and stirred on magnetic stirrer.

Poly electrolyte solution of drug and polymer was added drop by drop to the CaCl2 solution with the help of 21 G needle. Stirring at 500 rpm was further continued till a homogenous dispersion was formed. The formed alginate hydrogel beads were cured at different time interval. Going on the ending of this phase the solution of cross linking agent was decant and the alginate beads were wash frequently for three times with 50ml distilled water. The alginate hydrogel beads were dried out at 60°C for 2h in a hot air oven 21.

Particle Size Analysis: The particle size distribution analysis was performed by using an optical microscope. A minimum of 15 dried hydrogel beads per batch were counted for the determination of particle size and mean diameter is calculated 23.

Drug Entrapment Efficiency: Entrapment efficiency was calculated to determine the ability of micro hydrogel beads to entrap the drug. About 50 mg of accurately weighed drug loaded hydrogel beads were crushed in a glass mortar and pestle and mixed with 100 ml phosphate buffer (pH 6.8) and kept for 24 hours. The solution was stirred on a magnetic stirrer for 30 min, filtrate was analyzed spectro-photometrically at 283.4 nm. The drug entrapment efficiency was calculated as per the following formula. Drug content was calculated with the help of standard calibration curve of rabeprazole sodium 24.

In-vitro Drug Release Study: The release profiles of rabeprazole sodium from coated hydrogel beads were examined in three different buffer solutions (pH 1.2, 6.8 and 7.4) to mimic the various physiological GI-tracts. The medium of pH 1.2 represented the condition of gastric region pH 6.8 was a compromise condition between pH of the gastric and small intestine and pH 7.4, which is simulated intestinal fluid. The study was carried out in the rotating basket type dissolution apparatus at constant speed (100 rpm) and the temperature of the medium was maintained at 37 ± 0.5 °C for 8 hours. 100 mg of drug loaded coated alginate hydrogel beads were evaluated for drug release. The dissolution studies were carried out in 900 ml of pH 1.2 buffers for two hours. Aliquots of 5 ml every 60 min were withdrawn and immediately replaced the dissolution medium with fresh buffer solution to maintain sink conditions.

Percentage Yield: The percentage yield of the coated hydrogel beads was found in the range of 71.78 ± 0.45 % to increase 89.45 ± 0.36 %. (Table 2) The results revealed that the percentage yield of the formulation was found to with the increase in sodium alginate concentration and CaCl2 concentration. It was observed from the results that formulation F11 showed highest 89.45 ± 0.36 % yield. (Fig. 1)

The result indicates a comparative raise in the mean particle size of hydrogel beads with the raise in the quantity of sodium alginate in the formulations. This could be attributed to an increase in relative viscosity at higher concentration of sodium alginate and formation of large droplets during addition of polymer solution to the gelling agent.

Further, the increase in the concentration of calcium chloride would significantly decrease the mean particle size of beads. It has been stated that when a drop of alginate solution comes in contact with calcium ions, gelation occurs instantaneously. While Ca+2 ions penetrate into inner of droplet, water is squeeze out of the inner from droplet, resulting contraction of beads. The size of the spherical matrix could easily be controlled by varying the stirring speed and cross-linking time of the system. 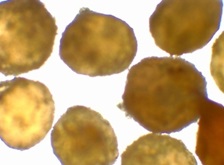 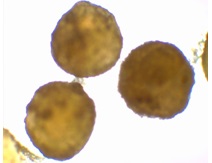 Drug Entrapment Efficiency: Drug entrapment efficiency of all the formulation was determined and it was found to be in the range of 67.45 ± 0.23 to 82.89 ± 0.64 (Table 4). The % DEE of the hydrogel beads was found to increase with the increase in concentration of sodium alginate and calcium chloride. It was due to formation of more hydrogel beads on increasing sodium alginate concentration thus entrapping the greater amount of the drug. This may be attributed to the greater availability of active calcium binding sites in the polymeric chains and, consequently, the greater degree of cross-linking as the amount of sodium alginate increased. However, on increasing the conc. of CaCl2, hard and complex hydrogel was formed which resulted in more drug entrapment. Formulation F5 (sodium alginate=2%, CaCl2=4%) was found to possess least % DEE i.e. 67.45 ± 0.23 % and maximum % DEE of 82.89 ± 0.64 % was found in formulation F11 (sodium alginate=4%, CaCl2=5%) shown in Fig. 3.

Swelling Time Study: Swelling time of the prepared hydrogel beads (coated) was found to be in the range between 04 to 29 minutes at pH 7.4 and 7 to 33 minutes at pH 1.2 respectively (Table

In-vitro Drug Release Study: Drug release from formulated hydrogel beads was performed in different media, in simulated gastric fluid (SGF) pH 1.2 for initial 2 h, mixed phosphate buffer pH 6.8 for the period up to 6 h and simulated intestinal fluid (SIF) pH 7.2 at end of 8 h studies. Formulation F1 (containing 2 % sodium alginate 0.2 % HPMC K4M, 3% CaCl2) showed the maximum drug release of 89.42 ± 0.13 % in 8 h (Table 6) compared to other formulations whereas minimum drug release was shown by formulation F11 (containing 4% sodium alginate, 0.2% HPMC K4M, 5% of CaCl2) i.e. 62.17±0.35% drug in 8 h (Table 9). The results indicates that when concentration of sodium alginate and calcium chloride was increased the drug release rates from the formulation were decreased and shows more sustained effect. The sustained effect of formulation increased with the increased number of the apparent cross-linking points formed within the calcium-alginate hydrogel beads with increasing alginate concentration. It was also found that with increased concentration of CaCl2, the drug release rate becomes more sustained. When concentration of calcium chloride was increased more Ca+2 ions were present for complex formation and cross linking with alginate, due to which strong, rigid and hard hydrogel beads were formed with less pores, which may reduce the penetration of dissolution medium into core of the matrix, therefore decreasing the release rate.

CONCLUSION: The study has revealed that ionotropic gelation technique can be successfully employed for the preparation of rabeprazole sodium hydrogel beads by utilizing sodium alginate and calcium chloride as drug release modifiers. Eudragit S 100 coating further helps in overcoming the problem of gastric damage during the use of NSAIDs rabeprazole sodium. Selection of polymer is important to achieve more entrapment efficiency and to sustain the release of drug from hydrogel beads. Effect of various formulation variables such as sodium alginate concentration, calcium chloride concentration and curing time of alginate hydrogel beads were studied.

The particle size of the hydrogel beads were found to increase with the increase in sodium alginate and calcium chloride concentration. The swelling time of coated hydrogel beads at pH 1.2 was found to be higher than at pH 7.4. The drug release from the hydrogel beads was affected by the pH of the dissolution medium and results showed more sustained effect in acidic medium (pH 1.2). The results indicated that the more sustained effect with increase in the concentration of sodium alginate and CaCl2.

ACKNOWLEDGEMENT: We are thankful to Yarrow Chem. Ltd., Mumbai, India for providing the samples of Rabeprazole Sodium, Sodium alginate, Eudragit S100 and HPMC K4M. We also acknowledge the facilities provided by the Department of Pharmaceutical Sciences Bhimtal Campus, Bhimtal.