ABSTRACT: Solubility of drug is considered to be one of the crucial parameter to achieve its desired concentration in systemic circulation and better pharmacological response. As most of the drugs available are poorly aqueous soluble, solubility enhancement has become major challenge to the formulators in the product development of many orally administered drugs. Therapeutic response of drug as well bioavailability can be limited by poor aqueous solubility of drugs. Earlier, many techniques have been developed for enhancing solubility of drugs. Apart from those, hydrotropic solubilization is one of the solubility enhancement techniques applicable to enhance solubility of hydrophobic drugs with the use of hydrotropes like sodium benzoate, urea, piperazine etc. In the present investigation Lumefantrine, an anti malarial drug was selected as model drug for the reason it has very low water solubility of 0.009 mg/ml and belongs to BCS Class IV. The key objective of current research work was to enhance aqueous solubility of this drug using hydrotropic solubilization technique. Solubility studies were performed using various concentrations of hydrotropes like sodium citrate, sodium benzoate, etc. The results suggested that solubility of Lumefantrine was increased more than 30 folds when added to 30% sodium citrate solution and marked its importance in pharmaceutical field.

Therefore, solubility is one of the important parameter to be considered in the product development in order to achieve desired concentration of drug in systemic circulation which further gives effective pharmacological response. Currently only 8% of new drug candidates have both high solubility and permeability.

The term ‘Hydrotropy’ was put forward by Carl Neuberg 1 to describe increase in solubility of a solute by the addition of fairly high concentrations of alkali metal salts of various organic acids. Hydrotropy enhances solubility of drug by many folds with use of hydrotropes like sodium benzoate, sodium citrate, urea, niacinamide etc. and have many advantages like; it does not require chemical modification of hydrophobic drugs, use of organic solvents, or preparation of emulsion system etc 2. Hydrotropic agents are also a type of solubilizers which increase the solubility of poorly water soluble drugs 3. Examples of various hydrotropic agents that are used as excipients in order to increase aqueous solubility of drug are urea, nicotinamide, sodium benzoate, sodium salicylate, sodium acetate, piperazine, nicotinamide, sodium toluate 4 - 13.

Here, Lumafantrine was selected as model drug. Lumefantrine, also known as Benflumetol, is basically a long acting anti-malarial drug which is very effective in treatment of resistant P. falciparum malaria. It is an erythrocytic schizontocide and acts by inhibiting haeme polymerization in the food vacuole of plasmodia. Lumefantrine belongs to BCS Class IV having low water solubility of 0.009 mg/ml. Hence it is necessary to increase the solubility of drug that may further increase bioavailability and also results in reduction of dose. Lumefantrine is generally given in combination therapy with artemether such as Coartem tablets (strength 20/120 mg; artemether / lumefantrine) in order to treat malaria. Here artemether is short acting where as lumefantrine is long acting anti malarial drug.

UV Spectral Studies: Identification of Lumefantrine was done by UV Spectrophotometric method using Shimadzu Spectrophotometer UV-1800 (Shimadzu Corp., Japan). About 20 mg of drug was accurately weighed and dissolved in 200 ml of methanol R by sonication for about 15 minutes. The solution was allowed to cool to room temperature and diluted five times with methanol R. The absorption spectrum of the diluted solution when observed between 275 and 325nm, exhibits a maximum at about 302 nm; the specific absorbance (A 1% 1 cm) is between 314 and 348 14.

IR Analysis: The IR analysis of Lumefantrine sample was carried out using IR Affinity-1 (Shimadzu Corp., Japan). Here, diamond is the preferred choice for most applications because of its robustness and durability. The solid material is placed onto the small crystal area and then the pressure arm is positioned over the crystal/sample area.

Force is applied on to the sample, pushing it onto the diamond surface. Transmittance was measured from wave number 4000 cm-1 to 400-1 applying Happ-Gensel apodization.

Quantitative Solubility Studies: An excess amount of solute is dissolved in 10 ml of selected solvent till saturated solution was obtained. The conical flasks were stoppered and agitated in thermostatically controlled orbital shaker (Tanco, Pitampura, New Delhi, India) at 25 ± 1 °C. After 24 hrs equilibrium was attained and the samples were filtered through Whatman filter paper (No.1). The individual samples were analyzed after suitable dilution to determine concentration of drug dissolved using UV-VIS spectrophotometer 4. The solubility study was carried out in triplicate and the observations were given in Table 4.

pH Dependent Solubility Studies: An excess quantity of drug was added to a series of stoppered conical flasks containing 10 ml of phosphate buffer solutions (of varying pH) until saturated solution was obtained. The flasks were mechanically shaken at room temperature for 24 hrs, in thermostatically controlled orbital shaker (Tanco, Pithampura, Delhi) at 25 ± 1 °C. These suspensions were filtered through Whatman filter paper (No.1). 4 Aliquots of filtrate obtained were diluted with distilled water and analyzed using UV spectrophotometer at 332 nm against blank. The solubility study was carried out in triplicate and the results were shown in Table 5.

Solubility Studies using Hydrotropes: An excess quantity of drug was added to a series of stoppered conical flasks containing 10 ml of hydrotropic solutions until saturated solution was obtained. The flasks were mechanically shaken at room temperature for 12 hrs, in thermostatically controlled orbital shaker (Tanco, Pithampura, Delhi) at 25 ± 1 °C. These suspensions were filtered through Whatman filter paper (No. 1) 4. Aliquots of filtrate obtained were diluted with suitable quantity of required solvent and analyzed using UV spectrophotometer at 332 nm. The solubility study was carried out in triplicate and observations were shown in Table 6.

UV Spectral Studies: UV spectroscopic analysis for the drug was performed and the maximum absorption i.e. λmax of Lumefantrine was observed at 332 nm Lumefantrine. UV analysis was carried out using 0.1M methanolic HCl as the drug is not completely soluble in methanol and require acidic environment because it is weakly basic in nature. The drug spectrum was shown in Fig. 1. 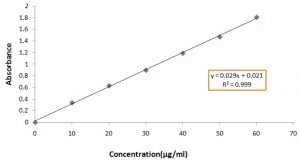 IR Analysis: The IR Spectra of samples of Lumefantrine were shown in Fig. 3. The characteristic peaks attributable to various functional groups present in drug molecule were recorded in Table 2.

The peaks which were observed were in the corresponding range of standard peak for the respective functional group. Hence the results reveal that the sample refers to Lumefantrine structure.

All the peaks values were found to be near the standard values to confirm the purity of the drug molecule.

Qualitative Solubility Studies: The results of qualitative solubility of Lumefantrine shown in Table 3 reveal that the drug is freely soluble in dichloromethane, ethyl acetate and chloroform.

Quantitative Solubility Studies: The quantitative solubility of Lumefantrine determined in different solvents was illustrated in Table 4.

TABLE 4: THE QUANTITATIVE SOLUBILITY OF LUMEFANTRINE IN DIFFERENT SOLVENTS

pH Dependent Solubility Studies: The pH dependent solubility of Lumefantrine in different phosphate buffers ranging from pH 1.2 to 10 were shown in Table 5. Lumefantrine was found to be more soluble at lower pH indicating basic nature of drug. 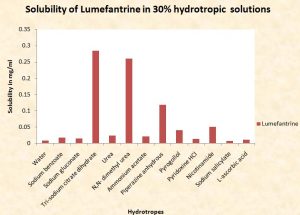 Solubility Enhancement Ratio Determination: Solubility enhancement ratio for Lumefantrine was determined and the results were shown in Table 7.

Solubility of Lumefantrine was enhanced in 30% hydrotropic solutions of Tri-sodium citrate dihydrate, N, N- dimethyl urea, Piperazine anhydrous, Nicotinamide, Pyrogollol, Urea, Ammonium acetate and Sodium benzoate. For Lumefantrine, the highest solubility was observed in 30% Tri-sodium citrate dehydrate solution and the solubility enhancement ratio was observed as 31.13 compared to that of water.

CONCLUSION: It can be concluded that the concept of hydrotropic solubilization technique is novel, safe, eco-friendly and economic for enhancing bioavailability of poorly water-soluble drugs. Actually, low aqueous solubility was the major concern for Lumefantrine; hence by the use of hydrotropic solubilization technique not only solubility, dissolution rate increased but also there would be good scope of increase in bioavailability of Lumefantrine.

As a result, daily dose, frequency of administration as well other side effects related to Lumefantrine would be minimized to a great extent.

The solubility studies revealed that the solubility of drug was increased more than 30 folds when added to 30% Tri sodium citrate dihydrate solution and marked its importance in pharmaceutical field.

ACKNOWLEDGEMENT: The authors are grateful to Department of Pharmaceutics, Swami Vivekanand College of Pharmacy for providing the facilities to perform research work and they also declare that they have no conflict of interest.

FUNDING: The authors are very thankful to MPCST (M.P. Council of Science and Technology), Bhopal for funding this project work.