Traditional analytical approaches including HPLC (High-Performance Liquid Chromatograph), GC (Gas Chromatograph), UV (Ultraviolet) detection, etc., have become insufficient to effectively handle the growing number of challenges in analyses of species- specificity and sensitivity. Modern analytical technique referred to as hyphenated techniques, originate from the traditional use of molecule or element specific detection in electrophoresis or chromatography. Currently the most common techniques for trace element speciation include a combination of separation technique coupled with a detection technique that is more sensitive. Earlier such hyphenated techniques were the coupling of separation of a special sample preparation off-line and later adding a detection technique. Presently, the hyphenated technique is developed from the coupling of a separation technique (Chromatography) and an on-line spectroscopic detection technology. Hyphenated techniques combine chromatographic and spectral methods to exploit the advantages of both. Chromatography produces pure or nearly pure fractions of chemical components in a mixture. Spectroscopy produces selective information for identification using standards or library spectra. These hyphenated techniques offer shorter analysis time, higher degree of automation, higher sample throughput, better reproducibility, reduction of contamination because it is a closed system, Enhanced combined selectivity and therefore higher degree of information. The remarkable improvements in hyphenated analytical methods over the last two decades have significantly broadened their applications in the analysis of biomaterials, especially natural products. In this article, recent advances in the applications of various hyphenated techniques, e.g., GC-MS, LC-MS, LC-FTIR, LC-NMR, CE-MS, etc. in the context of pre-isolation analyses of crude extracts or fraction from various natural sources, isolation and on-line detection of natural products, chemotaxonomic studies, chemical fingerprinting, quality control of herbal products, dereplication of natural products, and metabolomic studies are discussed with appropriate examples.

Chromatography - Produces pure or nearly pure fractions of chemical components in a mixture.

In recent years, hyphenated techniques have received ever-increasing attention as the principal means to solve complex analytical problems. The power of combining separation technologies with spectroscopic techniques has been demonstrated over the years for both quantitative and qualitative analysis of unknown compounds in complex natural product extracts or fractions.

Hyphenated separation techniques refer to a combination of two (or more) techniques to detect and separate chemicals from solutions. Most often the other technique is some form of chromatography. Hyphenated techniques are widely used in chemistry and biochemistry. A slash is sometimes used instead of hyphen, especially if the name of one of the methods contains a hyphen itself.

GC-MS, which is a hyphenated technique developed from the coupling of GC and MS, was the first of its kind to become useful for research and development purposes. Mass spectra obtained by this hyphenated technique offer more structural information based on the interpretation of fragmentations.

Sometimes, polar compounds, especially those with a number of hydroxyl groups, need to be derivatized for GC-MS analysis. The most common derivatization technique is the conversion of the analyte to its trimethylsilyl derivative.

Instrumentation: In GC-MS (Figure 2), a sample is injected into the injection port of GC device, vaporized, separated in the GC column, analyzed by MS detector, and recorded. The time elapsed between injection and elution is called ''retention time'' (tR). The equipment used for GC-MS generally consists

The GC-MS columns can be of two types: capillary columns and macrobore and packed columns. The interface transports efficiently the effluent from the GC to MS. 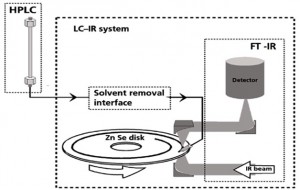 The most extensively used interfaces for a GC-MS are electron impact ionization (EI) and chemical ionization (CI) modes. However, in modern GC-MS systems, various other types can be used that allow identification of molecular ion. For example, an orthogonal TOF mass spectrometry coupled with GC is used for confirmation of purity and identity of the components by measuring exact mass and calculating elemental composition.

Nowadays, a GC-MS is integrated with various on-line MS databases for several reference compounds with search capabilities that could be useful for spectra match for the identification of separated components.

However, combination of HPLC and IR is difficult and the progress in this hyphenated technique is extremely slow. In addition, as a detection technique, IR is much less sensitive compared to various other detection techniques, e.g., UV and MS. The recent developments in HPLC-IR technology have incorporated two basic approaches based on interfaces applied in HPLC-IR or HPLC-FTIR.

The approach used with the flow cell in LC-IR is similar to that used in UV-Vis and other typical HPLC detectors (Figure 3). In this case, absorption of the mobile phase induces the interference of the detection of sample component absorption bands, but some transparent region of the mid-IR range produces detection possibility. For example, if one uses a mobile phase of a deuterated solvent such as heavy water or perdeuterated methanol, IR can monitor many organic compounds that have C-H structures in the molecules. 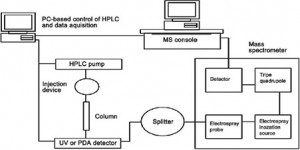 The solvent-elimination approach is the preferred option in most of the LC-IR operations, the mobile phase solvent is eliminated, IR detection is carried out in some medium that has a transparency for IR light.
Generally, KBr or KCl salts are used for the collection of sample components in the eluent, and heating up the medium before IR detection eliminates the volatile mobile phase solvents 5, 6. There are two types of interfaces for the solvent-elimination approach:

Instrumentation: A switching valve can help make a working combination of the two techniques. A typical automated LC-MS system (Figure 4) consists of double three-way diverter in-line with an;

Hence, the information obtained from a single LC-MS run, on the structure of the compound, is rather poor. However, this problem has now been tackled by the introduction of tandem mass spectrometry (MS-MS), which provides fragments through collision-induced dissociation of the molecular ions produced.  The use of LC-MS-MS is increasing rapidly. 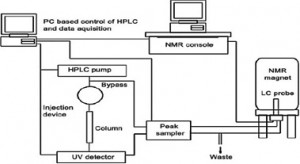 An LC-MS combines the chemical separating power of LC with the ability of an MS to selectively detect and confirm molecular identity. MS is one of the most sensitive and highly selective methods of molecular analysis, and provides information on the molecular weight as well as the fragmentation pattern of the analyte molecule. The information obtained from MS is invaluable for confirming the identities of the analyte molecules 7, 8, 9.

Hyphenated techniques such as; HPLC coupled to UV and mass spectrometry (LC-UV-MS) have proved to be extremely useful in combination with biological screening for a rapid survey of natural products.

LC-NMR experiments can be performed in both continuous-flow and stop-flow modes. A wide range of bioanalytical problems can be addressed using 500, 600, and 800 MHz systems with 1H, 13C, 2H, 19F, and 31P probes. The main prerequisites for on-line LC-NMR, in addition to the NMR and HPLC instrumentation, are the continuous-flow probe and a valve installed before the probe for recording either continuous-flow or stopped-flow NMR spectra.

A UV-Vis detector is also used as a primary detector for LC operation. Magnetic field strengths higher than 9.4 T are recommended, i.e., 1H resonance frequency of 400 MHz for a standard HPLC-NMR coupling. The analytical flow cell was initially constructed for continuous-flow NMR acquisition. However, the need for full structural assignment of unknown compounds, especially novel natural products, has led to the application in the stopped-flow mode.

From this detector, the flow is guided into the LC-NMR interface, which can be equipped with additional loops for the intermediate storage of selected LC peaks. The flow from the LC-NMR interface is then guided either to the flow-cell NMR probe-head or to the waste receptacle. Following passage through the probe-head, the flow is routed to a fraction collector for recovery and further investigation of the various fractions analyzed by NMR. 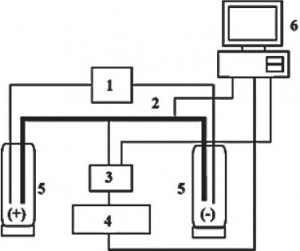 In most of the LC-NMR operations, reversed-phase columns are used, employing a binary or tertiary solvent mixture with isocratic or gradient elution. The protons of the solvents of the mobile phase cause severe problems for obtaining an adequate NMR spectrum. The receiver of the NMR spectrometer is not quite able to handle the intense solvent signals and the weak substance signals at the same time. To overcome this problem, solvent signal suppression can be achieved by one of the three major methods: presaturation, soft-pulse multiple irradiation or water suppression enhancement through T1 effects (WET) presaturation employing a z-gradient 10.

This problem can also be minimized by considering the following guidelines.

It separates species by applying voltage across buffer-filled capillaries, and is generally used for separating ions that move at different speeds when voltage is applied, depending on their size and charge. The solutes are seen as peaks as they pass through the detector and the area of each peak is proportional to their concentration, which allows quantitative determinations. Analysis includes purity determination, assays, and trace level determinations 11. 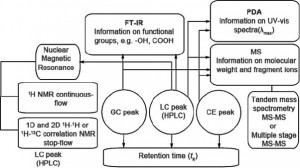 Instrumentation: It consists of;

Application of Hyphenated Technique in Pharmacy 12, 13, 14, 15, 16: Some examples of the application of hyphenated techniques in natural products analysis are (Figure 7).

LC-MS, if the ionization technique is chosen appropriately, can be an extremely powerful and informative tool for screening crude plant extracts. The currently available various types of LC-MS systems allow the analysis of small nonpolar compounds to large polar constituents like oligosaccharides, proteins, and tannins present in natural product extracts.