Categories Menu
Home » HYPOACIDIC ACTIVITY OF THE HERBAL EXTRACT; A STUDY ON THE INHIBITION OF PARIETAL CELL K+/H+ ATPase PUMP

HYPOACIDIC ACTIVITY OF THE HERBAL EXTRACT; A STUDY ON THE INHIBITION OF PARIETAL CELL K+/H+ ATPase PUMP

HYPOACIDIC ACTIVITY OF THE HERBAL EXTRACT; A STUDY ON THE INHIBITION OF PARIETAL CELL K+/H+ ATPase PUMP

ABSTRACT: Gastrointestinal tract disorders occur due to an imbalance of gastric acid secretion and defensive factors. Histamine receptor blockers and proton pump inhibitors are the most prominent therapies in the treatment of GI tract disorders. Inhibition of the K+/H+ ATPase pump blocks the secretion of gastric acid (HCl) from the parietal cells. The adverse effects of currently available drugs have obligated the screening of herbs as potent alternate medicines. In addition, plants contain different phytoconstituents, which are responsible for increasing defensive mechanisms against GI tract ulcers. Herein, we screen for the inhibition of K+/H+ ATPase pump using the methanolic extract of Clerodendrum inerme leaves. The extract exhibited 62.9% of inhibition (250 μgm) in a dose-dependent manner with an IC50 of 20.560 μgm/ml. Omeprazole (0.2mg/ml) was used as a positive control for the study. GC-MS analysis confirmed the presence of Phytol, a diterpenoid, as a major constituent in the methanolic extract. Hence, terpenoids could be attributed to the hypoacidic activity by inhibiting K+/H+ ATPase enzyme.

INTRODUCTION: The pathophysiology of gastroduodenal ulcers is caused by an imbalance between defensive factors (mucus, bicarbonate secretion, mucosal barrier, blood flow, and prostaglandins) and destructive factors (reactive oxygen species, excess of acid, and pepsin secretion), resulting in acute inflammation of the gastrointestinal mucosae 1. Other offensive factors like Helicobacter pylori, nonsteroidal anti-inflammatory drugs (NSAIDs), stress, alcohol, and smoking stimulate the ulcers 2. Many antiulcer drugs are available in the market, such as H2 receptor antagonist, proton pump inhibitors,

In this context, the use of medicinal plants has gained interest and captured the attention of many researchers. Plant extracts can be valuable and serve as a new source of therapeutics in the treatment of gastric ulcers whereby antisecretory, cytoprotective and antioxidant activities, isolated or in combination, are the three main functions of a gastroprotective agent, which play the key role in gastric mucosal protection 4. Medicinal plants serve as the repository of several chemically active compounds such as Alkaloids, Flavonoids, Terpenoids, Glycosides, Saponins, Tannins, etc.

A large number of these bioactive molecules from medicinal herbs express antiulcer activities 5.

The plant Clerodendrum inerme belongs to the family Verbenaceae is commonly known as Wild Jasmine grows in the Indian subcontinent and around the world (Australia, Asia, Malaysia, and the Pacific islands). Different parts of this plant are used in the treatment of rheumatism, skin disease, venereal infections, beriberi, and tumors 6-7.

The current study aimed to evaluate the presence of active phytochemicals in the methanol, chloroform and aqueous extracts of the plant. Further, the active component was screened for H+ /K+ -ATPase inhibition assay.

Sample Collection: Clerdendrum inerme leaves were collected from the herbal garden of Garden City University, Bengaluru, in June 2018. The species was identified as per the National plant data center, LA 70874-4490.

Leaves were washed, shade dried, the powder was sieved and stored in an airtight container. 10 gram each of the leaf powder was extracted with 50ml of water, chloroform, and methanol separately. The extract was then stored for further assay.

Proximate Analysis of the Solvent Extracts: Proximate composition of the three solvent extracts was carried out to screen for the presence of tannins, terpenoids, saponins, glycosides, proteins, total phenols, flavonoids as well as alkaloids.

Isolation of Parietal Cells from Sheep Stomach: The fundic portion of the stomach was collected soon after sacrificing and is rinsed with Krebs-ringer buffer (250mM sucrose, 2mM MgCl2, 1mM EGTA, 2mM Hepes-Tris of pH 7.4). Mucosal scraping of the fundus was suspended in 10 volumes of Krebs-ringer buffer (pH 7.4) and homogenized with 20 strokes of a mortar driven Teflon pestle homogenizer. The tissue is discarded, and the filtrate was subjected to a subcellular fraction. The pellet so obtained was dissolved in 2 ml of sucrose-tris buffer, checked for cell viability, and used as H+/K+-ATPase enzyme source 8. The protein concentration of the enzyme source was determined by the Biuret method using BSA as standard.

Cell Viability: 10µl of the cells were suspended in 10µl of 0.1% trypan blue and allowed to stand for 10 min. The cells were counted in a hemocytometer, and % viability was checked.

Determination H+/K+- ATPase Inhibition Activity: 20µl of the enzyme sample was incubated with different aliquots of the plant extract for 10 min. Further, 1.0ml of the buffered substrate (ATP) was added and incubated for 8 min. Then the reaction was stopped by adding 5% TCA solution.  To 1ml each of the reaction mixtures, 1ml of 2.5% ammonium molybdate and 0.5ml ANSA was added and allowed to stand for 10 min. The absorbance of phosphate released was read at 670nm against an appropriate blank solution. A standard was also set up simultaneously using 40µg/ml of standard potassium dihydrogen phosphate solution. A negative control without plant extract and positive control with omeprazole was used for the inhibition study.

Percentage of Inhibition was calculated by using the formula,

Proximate Analysis: Table 1, Shows the result of the proximate analysis of C. Inerme solvent extracts. A considerable amount of terpenoids and moderate quantities of flavonoids, polyphenols were reported in the methanolic extract.

Proteins, flavonoids, polyphenols, and tannins were found in small concentrations in the aqueous extract, whereas alkaloids and terpenoids were found in minute quantity in the chloroform extract of the C. Inerme leaves.

H+/K+- ATPase Inhibition Assay: Table 2 refers to the H+/K+ - ATPase inhibition activity. Out of the 3 solvent extracts used for the study, only methanolic extract of C. inerme showed potent inhibitory activity for H+ /K+ ATPase enzyme isolated from the sheep stomach mucosa. Omeprazole (0.2mg/ml) was used as a positive control for the study. Different aliquots of the methanolic extract were tested for inhibition efficiency. Dose-Dependent Inhibition of enzyme was observed with maximum inhibition activity of 62.9% for 250μg/ml of the extract with an IC50 of 20.560μgm/ml. The specific activity of the enzyme was found to be 3.5 × 10-5 U/mg protein.

Characterization of the Bioactive Phytochemical by GC-MS: The GC-MS analysis of the methanolic extract leads to the identification of several compounds. As shown in the GC-MS data Fig. 1, the major components were Phytol, Citronellol, Cyclohexanol derivative, Isophytol, and Menthol. These bioactive constituents belong to the category of acyclic mono and diterpenoids and alcohol derivatives. 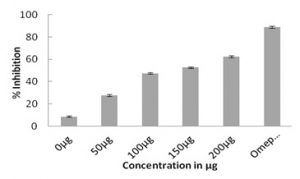 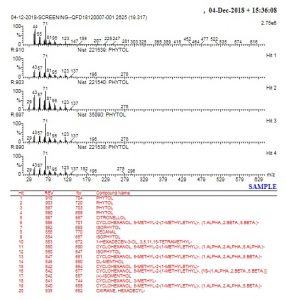 The GC-MS spectrum confirmed the presence of various components with different retention times. The mass spectrometer analyses the compounds eluted at different times to identify the nature and structure of the compounds.

The result of the purification assay by GC-MS showed that the active molecule “PHYTOL” present in the highest quantity and is responsible for the inhibition of the K+/H+ ATPase enzyme. Since ancient times, plants and plant derived-products have been used in folklores around the world for the treatment of several ailments and diseases. Currently, herbal medicine is becoming a viable alternative treatment over the commercially available synthetic drugs on Gastroduodenal ulcer management/treatment 9. Herbal drugs have preserved their importance due to relatively less toxicity, better cultural acceptability, better compatibility with the human body, lesser adverse effects, economical, effective and easy availability, Cynodon dactylon, Ocimum sanctum, Glycyrrhiza glabra, Ficus religiosa are some of the plants which demonstrated potent antiulcer activity 10-13. The pharmacological studies indicated an immense potential of C. Inerme as anti-inflammatory, anti-diabetic, antimalarial, antiviral, antihypertensive, hypolipidemic, and antioxidant activities. The results from toxicological studies have demonstrated that there is a wide margin of safety for the therapeutic application of C. Inerme, and these findings have substantiated the traditional use of this plant extracts 14.

CONCLUSION: In the light of these findings, we can conclude that the methanolic extract of C. inerme can be an efficient phytochemical drug for the inactivation of H+ /K+ ATPase proton pump, a major gastroprotective mechanism.