In view of the ethanobotanical and traditional claims of Anthocephalus cadamba plant used as hypoglycemic agent and wide use of its bark, fruits and leaf extract in anti-diabetic activity. Methanolic extract of Anthocephalus cadamba bark in alloxan induce hypoglycemia in rats. In glucose loaded normal rats, hypoglycemia was observed maximum at 120 minutes after administration of ACBE (Anthocephalus cadamba bark extract). Single dose administration of ACBE produce significant hypoglycemic effect in alloxan induced diabetic rats. The present study indicates that the methanol extract of barks posses anti-diabetic properties which suggest the presence of biologically active components. The extract might be promoting glucose uptake and metabolism or inhibiting hepatic gluconeogenesis. Result from the phytochemical analysis of Anthocephalus cadamba revealed the presence of flavonoids, which has also been isolated from the other plant and found to stimulate secretion or possess an insulin-like effect

INTRODUCTION: Diabetes mellitus (DM) is a widespread disorder, which has long been recognized in the history of medicine, before the advent of insulin and oral hypoglycaemic drugs, the major form of treatment involved the use of plants. More than 400 plants are known to have been recommended recent investigations have confirmed the potential value of some of this treatments1. Diabetes mellitus is a group of endocrine syndromes characterized by hyperglycaemia; altered metabolism of lipids, carbohydrates, and proteins, and an increased risk of complications from vascular disease. Most patients can be classified clinically as having either type I diabetes mellitus (type I DM formerly known as insulin dependent diabetes or IDDM) and type II diabetes mellitus (type II DM formerly known as non-insulin dependent diabetes or NIDDM)2.

Anthocephalus cadamba (Rubiaceae)  is a deciduous tree of occasionally buttressed up to 37.5m in height and 2.4m in girth; with a clear bale of 9m  and horizontal branches, found all over India and also cultivated. Bark grey, fissured; leaves coriaceous, broadly ovate, ellipticoblong, 7.5-18.0 cm x 4.5-16.0 cm; flower heads globose, yellow, and solitary; terninal, 3.7cm in diameter consisting of small; yellow or orange colored3. The major constituents of stem bark are triterpenes, triterpenoid glycosides, saponins, indole alkaloids; cadambine, 3α- dihydrocadambine, cadamine, isocadamine and isodihydrocadambine4, 5, 6. There are reports that heartwood, leaves, flower and seed contain typical alkaloid cadambine and its derivatives 7. From bark, two triterpenoid glycosides A and B and triterpenoid saponins, phelasin A and phelasin B were isolated.8 Ayurvedic remedy that has been mentioned in many Indian medical literatures for the treatment of fever, anaemia, uterine complaints, menorrhigia, blood and skin diseases, diarrhoea, colitis, stomatitis, dysentery and in improvement of semen quality.9

Plant material: The bark of Anthocephalus cadamba was collected from Orai, Distt. - Jalaun (U.P.). The plant materials was identified and Authenticated by Dr. Gaurav Nigam, Department of Botany, Institute of basic Science, B. U. Jhansi (U.P.), India, Ref. No: - B.U./Bot./375/24- 01- 09.

Preparation of Extract: The bark of Anthocephalus cadamba shaded dried, and then these were made into coarsely powdered form using dry grinder. The powdered bark of the plant (180gm.) was packed in soxhlet apparatus and continuously extracted with petroleum ether (40-600C)  till complete extraction, after completion of extraction  the  solvent was  removed by distillation and then  concentrated extract obtained was dried under  reduced pressure using rotatory evaporator at temperature not exceeding 400C and then give moderate heating  on water bath.

A yellowish extract approximate 1 gm. was obtained. From the drug, petroleum ether was removed and the defatted drug was extracted with methanol (95%) till complete extraction, after completion of extraction the solvent was removed by distillation and then concentrated extract obtained dried under reduced pressure at temperature not exceeding 400C and then give moderate heating on water bath. The methanolic extract obtained was dark yellow in color, weighed about 42.8gm.  The methanolic extract was kept in Petridis and it was stored in desiccator at cool place.10

Animals: The adult male albino rats of weight 180- 240 gm were selected for the study. All animals were procured from disease free animal house, Institute of Pharmacy, Bundelkhand University, Jhansi.  The Institute of Pharmacy is approved by Institutional Animal Ethical Committee (716/02/a/CPCSEA). The animals were housed in polypropylene cages, 5 per cage with free access to standard laboratory diet and water ad libitum. The rats were maintained under standard laboratory conditions at 25±20C relative humidity 50±15% and normal photo period (12 h dark/ 12h light) were used for experiment.

Drugs: Alloxan of CDH, New Delhi was used for the inducted of diabetes and was obtained from Department of Pharmacy and the standard drug i.e. glibenclamide was received by Sun Pharmaceutical Industries, J & K.

Extraction of Plant: The powder of bark was subjected to extraction in methanol. The stem bark of Anthocephalus cadamba extract was then concentrated at reduced pressure and used for the experimentation.

Preparation of Dose: The Dose of 200 mg/kg and 400 mg/kg of methanol extract was selected for the test. All the doses were given orally after making suspension in vehicle i.e. 1% acacia gum and the standard drug i.e. glibenclamide was given orally (10 mg/kg) in the vehicle.

Induction of experimental diabetes: Diabetes mellitus was induced by administering intraparitoneal injection of alloxan monohydrate 120 mg/kg to the overnight fasted rats. Five days after administration of alloxan, fasting blood glucose of 300 to 450 mg/dl were included in the study11.

Procedure: After checking the fasting blood glucose in overnight fasted diabetic rats, they were divided into five groups of five rats each and one group of non-diabetic rats.

All the doses were given in the following manner;

The treatment was continued for 3 hour. During this period, food and water was supplied ad libitum. All the doses were administered orally by the oral feeding needle. The effect of extract on blood glucose levels was estimated on overnight fasted rats on hour 0, 1, 2, and 3 by the method described before. The basal values are those of the day on which extract was started to give. The general behaviours of the animals were recorded daily. The blood glucose level in (Mean ± S. E. M.) is shown in the Table 1 and 2.

Protocol: In this glucose tolerance test fasted normal rats were divided into four groups of five animals each, Group II served as control and received vehicle. Group V received standard drug glibenclamide at an oral dose of 10 mg/kg and Group III and IV received methanolic extract orally at a dose of 200 mg/kg and 400 mg/kg respectively. The rats of all the groups were given glucose (4g/kg), 30min after the extract and drug administration Blood samples were collected by tail nipping just prior to glucose loading and blood glucose levels were measured by Accuchek Comfort glucometer. Basal value is those after which glucose was administered.

Statistical Analysis: The data were statistically evaluated using one way Anova.  expressed as Mean ± S.E.M. followed by Tukey test using the Graph pad instant Demo (Data set 1.IS) version P. values of 0.05 or less were considered to be significant. 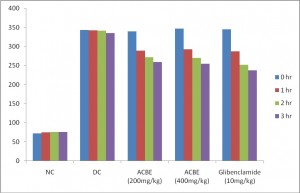 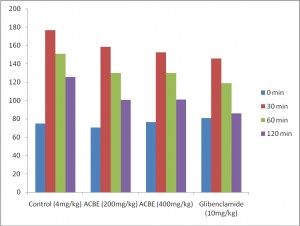