INTRODUCTION: In spite of knowledge, there are great efforts that have been made in the understanding and management of diabetes. Today, disease related complications are increasing day by day without any reduction in strength 1. In spite of the presence of known antidiabetic medicine available in the pharmaceutical market, remedies derived from medicinal plants are successfully used in the treatment of this disease 2. Complementary and alternative systems of medicine have been suggested as traditional treatments for treatment of diabetes mellitus 3. Diabetes mellitus is endocrine disorder, which is initially characterized by a loss of glucose homeostasis ensuing from defects in insulin action, insulin secretion which are resulting in impaired metabolism of glucose and other energy-yielding fuels such as lipids and protein 4. Diabetes mellitus is a major syndrome which is affected nearby 10% of population all over the world. In spite of the introduction of diabetes, hypoglycemic agents, and related complications continue to be a major medical problem. In the intervening period, variety of plant extracts have been treated orally for patients with non-insulin dependent diabetes mellitus. In the indigenous Ayurveda system of medicine, declaration was made on good number of plants for the cure of diabetes (madhumeha) and some of them have been evaluated experimentally and the active principles have been isolated 5-11.

However search for new Antidiabetic drugs continues. The mechanism of most of the herbals used to treat diabetes has not been defined 12 It has been attributed that the antihyperglycemic effect of these plants is due to their ability to restore the function of pancreatic tissues by causing an increase in insulin output or inhibit the intestinal absorption of glucose or to the facilitation of metabolites in insulin dependent processes. Hence treatment with herbal drugs has an effect on protecting â-cells and smoothing out fluctuation in glucose levels 13, 14. The WHO Expert Committee suggested that it is very important to investigate the derived from natural products, which were used in traditional system of medicines for the treatment of diabetes mellitus so hypoglycemic agent have focused on plants which are used in traditional system of medicines because they may be better treatment than synthetic drugs which are available in market 15, 16.

Lawsonia alba Lam. (synonyms Lawsonia inermis) commonly known as henna is a perennial plant of the family Lythraceae, henna leaves (mehendi) are very popular natural dye to finger, color hand, nails and hair 18. As a medicinal plant, henna has been used for astringent, anti hemorrhagic, intestinal antineoplastic, cardio-inhibitory, hypertensive and sedative effects and used as a folk remedy against amoebiasis, headache jaundice and leprosy. It contains mannite, tannic acid, mucilage, gallic acid and naphtaquinone on the other hand; its alcoholic extracts possess antibacterial activity against a wide variety of organisms 17. 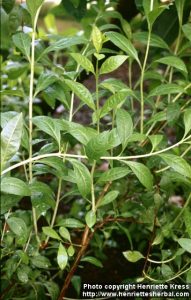 The plant is planted in home gardens as hedges and as ornamental. It is a perennial shrub branching profusely and reaching a height of up to six meters. The leaves of the plant are small, laceolate, dark-green and glabrous, opposite, with very short petioles. Flowers are small, white or pale pink colored and fragrant.  The plant leaf contains a red orange color component, lawsone (2_hydroxyl-1, 4-Napthoquinone). The capsulated fruits are borne in clusters, green in color. Henna is believed to have a cooling effect on the body and the paste is used to bring down the fever. According to phytochemicals analysis of henna, powdered leaves contain about 0.5-1.5 % lawsone, the chief constituents responsible for the dyeing properties of the plant18. Hence the aim of the study is to investigate Hypoglycemic and Antihyperglycemic effect of ethanolic extract of whole plant of Lawsonia inermis (henna) in streptozotocin induced diabetic rats.

Ethanolic Extraction: 70 g of dried material of henna was kept in soxhlet apparatus and 150 ml of ethanol was used for the process of extraction. The extraction was carried out for 24 hour. The filtrate was condensed in rotary evaporator and the residue was dried.

Induction of Diabetes in Rats: We used thirty two rats weighing 140-160 gm. They were acclimatized under laboratory conditions. They were allow free access to water but were deprived food overnight and their fasting blood sugar level was estimated. The rats were divided into four groups (Group 1, Group 2, Group 3, and Group 4) of 8 rats each. Diabetes was induced in rats of group 1, group 2 and group 3 by single intra -peritoneal administration of streptozotocin (45 mg/kg of body weight), whereas rats in group 4 were kept as untreated controls. Fasting blood glucose levels of all these animals were estimated after three days of treatment. Blood samples were drawn from cardiac puncture using tuberculin syringe from overnight fasted rats, serum samples were harvested and glucose level was determined spectrophotometrically employing glucose oxidative method.

Administration of Lawsonia inermis: Ethanolic extract of Lawsonia inermis was administered (150,300 and 500 mg/kg of body weight) for 28 days to induced diabetic albino rats and changes in body glucose were examined. Glibenclamide was used as standard drug.

RESULT AND DISCUSSION: Diabetes was induced in albino rats by a single intra- peritoneal injection of streptozotocin (45 mg/kg of body weight). Ethanolic extract of lawsonia inermis was administered (150,300 and 500 mg/kg of body weight) for 28 days to induced diabetic albino rats and changes in body glucose were examined. Glibenclamide was used as standard drug. The level of blood glucose was significantly decreased n diabetic rats.