INTRODUCTION:Diabetes is a chronic disease that occurs when the pancreas does not produce enough insulin or alternatively when the body cannot effectively use the insulin it produces hyperglycemia or raised blood sugar, is a common effect of uncontrolled diabetes and overtime leads to serious damage to many of the body’s systems, especially the nerves and blood vessels 1. According to World Health Organization projections, the prevalence of diabetes is likely to increase by 35% by the year 2025 2.

Insulin resistance is defined as diminished tissue response to the hormone at one or more sites in the complex pathway of its actions. The condition presents profound alteration in the metabolic pathways regulated by insulin. Defects in glucose uptake, hexokinase activity have been reported in the insulin resistant states 3. High dosage of fructose in the diet has been documented to induce insulin resistance accompanied by deleterious metabolic consequences including hyperinsulinaemia, hyperglycemia, glucose intolerance, hypertriglyceridemia and hypertension 4, 5. The fructose – fed rat is therefore used as an animal model of insulin resistance and is considered to parallel multiple metabolic syndrome observed in humans 6.

Chalcones are precursor compound for flavonoids and biosynthesized in plants and can also be synthesized in laboratory. The flavonoid hydroxychalcone has reputed to possess medicinal properties like antioxidant 7, antihepatotoxic, antimalarial 8, cytotoxic activity towards leukemia cell. The potential role of hydroxychalcone on insulin action has been shown in several in-vitro studies 9. It enhances the glucose uptake, phosphorylation of insulin receptor in 3T3-L1 adipocytes. These studies suggest that hydroxychalcone could act as insulin mimetic 10.

Animals: Rats used in this experiment were highly inbred male Wister Albino rats from laboratory (APCAS). The rats weighed 200g were used. The animals were housed in spacious caged under hygienic conditions (12hr light 12hr dark cycle at room temperature) and maintained on commercial pellet diet containing protein-21%, lipid-5%, nitrogen, free extract 55% and provided with metabolically energy at 3600 kcal/kg and also enriched by vitamins and minerals. It was supplied by the “Hindustan Lever Limited” Mumbai marked under the trade name “Gold Mohur feeds” water was provided. The rats were kept in animal house for ten days before starting the experiments. Ethical committee clearance was obtained from IAEC (Institutional Animal Ethical Committee) of CPCSEA (Committee for the Purpose of Control and Supervision of Experiments on Animals) withref no.: APCAS/IAEC/2011/09

Preparation of hydroxychalcone: Hydroxychalcone was dissolved in dimethylsulfoxide (DMSO) – normal saline. The final concentration of DMSO in normal saline did not exceed 0.5%. The animals in experimental groups were administered with Chalcones intraperitoneally (i.p.) at the dose of 25mg/kg body weight daily for 7 consecutive days.

Experimental Design: The experimental rats were divided into 5 groups of six each and treated as follows:

Enzymatic Activity Assay: Onthe final day of experiment, liver, kidney and adipose tissue was collected was excised from each animal; the tissue was washed with ice cold saline and homogenized in Tris HCl buffer pH 7.5. The tissue was used for the assay of Hexokinase, Glucose-6-PO4 ase, fructose 1, 6 bis phosphatase and Glycogen.

The activities of glucose-6-phosphatase and fructose-1, 6 bisphosphatase in liver, kidney and skeletal muscle are presented in Table 3 and fig 3, 4. In fructose fed rats significant increase were observed. Treatment with hydroxychalcone prevented the increase.

TABLE 1: Levels of glucose, insulin and glycosylated heamoglobin in plasma of control and experimental animals

Values are mean ± SD of six rats from each group. Treatment of animals and comparisons are as given in Table 1 *p<0.05. *µmoles of glucose phosphorylated/h/mg protein. # mg of glucose/g tissue 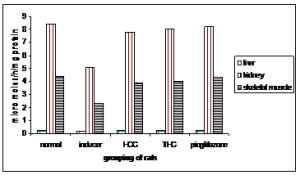 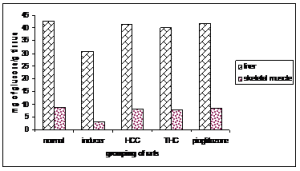 TABLE 3: ACTIVITIES OF G-6PASE AND FRU-1,6PASE IN LIVER, KIDNEY AND SKELETAL MUSCLE OF CONTROL AND EXPERIMENTAL ANIMALS

Values are mean ± SD of six rats from each group. Treatment of animals and comparisons are a given in table 1. *p<0.05. *   µg of pi liberated/min/mg protein. #   mlU/mg protein 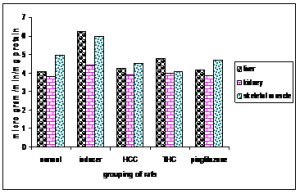 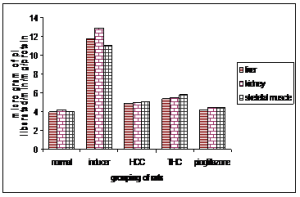 DISCUSSION: Increase in plasma glucose level associated with hyperinsulinaemia suggests impaired insulin action in fructose-fed rats. The degree of insulin resistance was higher in fructose fed rats; insulin resistance in fructose fed rats has been attributed to a low level of insulin-stimulated glucose oxidation due to modifications in the post receptor cascade of insulin action 10. Increased glycated haemoglobin level is an index of hyperglycaemia level is an index of hyperglycaemia. During hyperglycaemia glucose reacts non-enzymatically with neighbouring protein through the milliard reaction. Haemoglobin is particularly susceptible to glycation among the other proteins 11.

Decreased activities of hexokinase and glycogen indicate impaired glucose oxidation and decreased peripheral glucose utilization 12. While the increased activities of glu-6-phosphatase and fructose-1, 6-bisphosphatase and decreased glycogen content in fructose-fed rats confirm the gluconeogenic state. Decreased glycogen content in tissues could be due to reduced synthesis or increased breakdown of glucose. Reduction in hepatic glycogen concentration in liver has been reported in fructose-fed rats 13.

Hydroxychalcone administration (25mg/kg body weight) was effective in mitigating the adverse effects of HFD. Glucose tolerance and insulin sensitivity were improved by hydroxychalcone treatment. Hydroxychalcone brought back the activities of glucose metabolizing enzymes, levels of glycogen and protein bound sugars to near normal values when administered along with fructose.

On treatment of normal rats with hydroxychalcone enhances the glucose utilization in-vivo in a dose-dependent manner and potentiates the insulin stimulated tyrosine phosphorylation of insulin receptor substrate. Hydroxychalcone prevents the development of insulin resistance in HFD rats. They attributed this to the activation of the insulin signaling possible via the nitric oxide pathway in the skeletal muscle 15.

Increased glycated Hb is particularly susceptible to glycation among the other proteins. The adverse effect of hydroxychalcone increases the glucose uptake by the cells and reduces the glycosylated Haemoglobin 16. Enhanced uric acid level in HFD rats could be associated with the fructose had a different transporters, the favorable effect of hydroxychalcone may be attributed to their action on fructokinase activity is enhance so depletion of ATP and AMP decreased so, the uric acid level also decreased.

The activity of hexokinase and glycogen is decreased on treated with hydroxychalcone might be stimulate the insulin receptor activity by increasing the concentration of phosphorylated intracellular protein IRS-1 and to which leads to enhanced cellular glucose uptake and hexokinase activity 17. On the other hand hydroxychalcone significantly decreases the glu-6-phosphatase and fru-1, 6-bisphosphatase due to insulin mimetic effect of hydroxychalcone and significantly reduction in the level of gluconeogenic enzymes 18.

Research findings clearly show that hydroxychalcone triggers the insulin cascade system. Considering the increased intake of fructose as high fructose corn syrup and the high incidence of insulin resistance in the general population. Our finding provides evidence for the therapeutic potential of cinnamon in the treatment of insulin- resistant states.

CONCLUSION: In conclusion, the effect of hydroxychalcone on high fructose diet induced diabetic animals showed significant increase in glucose, insulin and glycosylated Haemoglobin and enzyme activity. Based on the results, hydroxychalcone at the dose of 25mg/kg body weight were effective and exhibit potent antidiabetic and anti oxidant activity.

ACKNOWLEDGEMENT: Sincere thanks to my guide Mrs. M. Jayanthi, Head of the Department of Biochemistry, for her valuable guidance and Ms. U. Kanagavalli, lecturer in Biochemistry, Adhiparasakthi College of Arts and Science, G. B. Nagar, Kalavai.