Herbal medicine is based on the principle that plants contain some natural substances that can promote health and cure illness.4 The most important of these biologically active constituents of plants are alkaloids, flavonoids, tannins and phenolic compounds.2

Carbon tetrachloride (CCl4) is a well recognized xenobiotic, liver and kidney being its principle target organs. CCl4 is activated in the liver to a highly reactive trichloromethyl radical which initiates free radical mediated lipid peroxidation of the cytoplasmic membrane phospholipids and causes functional and morphological changes in the cell membrane, which result in accumulation of lipid derived oxidants causing liver injury.5 Features of CCl4 induced hepatic injury include fatty degeneration of liver, raised liver enzymes and lipid levels and haemorrhagic necrosis of liver cell.

A fatty liver state is very often accompanied by dyslipidemia. Though the reason is not exactly known however it is thought to be due to but it is likely related to hepatic overproduction of the very low-density lipoprotein particles and dysregulated clearance of lipoproteins from the circulation.6 Medicinal plants are considered to be an important source of antioxidant compounds and the therapeutic benefit of many medicinal plants is to their antioxidant properties.7

The present study was performed to assess the hypolipidemic activity in rats against dyslipidemia following carbon tetrachloride induced hepatic injury.

Absolute alcohol (99.9% v/v) was used for the extraction process as almost all the components of Mimosa pudica is soluble in ethanol solvent. The leaves were shade dried and powdered. The powder was subjected to extraction with absolute alcohol in Soxhlet Apparatus at 45o C for a period of 4 hours. The extract was collected and filtered using Whatman No 1 filter paper and the filtrate was then subjected to evaporation under reduced pressure until a soft semi solid mass was obtained. The sample was stored in the refrigerator as a stock solution dissolved in liquid paraffin in 1:2 ratio (sample : liquid paraffin ) in an airtight container at a temperature of below 10oC.

The ethanolic extract was then subjected to preliminary phytochemical analysis to assess the presence of various phytoconstituents, it revealed the presence of flavonoids, alkaloids and glycosides.

Wistar albino rats of either sex weighing between 150-200 grams were procured from M/s Chakraborty Enterprise, Kolkata. The animals were acclimatized under laboratory conditions.

The animals were housed under standard conditions of temperature (25±2°C) and relative humidity (30%–70%) with a 12:12 light-dark cycle. They were fed with standard laboratory food. Water was allowed ad libitum under strict hygienic conditions.

Liver toxicity was induced in rats by administrating carbon tetrachloride (CCl4) subcutaneously (sc), in a suspension of liquid paraffin (LP; 1: 2 v/v) at a dose of 1 ml/kg body weight, on alternate days, for one week.18

In the experimental design the albino rats were assigned into three groups of ten animals each.

Group A was maintained as control which received liquid paraffin (3ml/kg) only by subcutaneous route on alternate days for one week.

Group B was maintained as induced group which received CCl4 subcutaneously in a suspension of liquid paraffin in 1: 2 v/v at the dose of 1 ml of CCl4/kg body weight on alternate days for one week.

Group C served as test group and received ethanolic extract of the leaves of Mimosa pudica (400mg/kg, p.o) daily and CCl4 (1ml/kg, s.c in a suspension of liquid paraffin in a ratio 1:2 v/v ) on alternate days for one week.

The animals were sacrificed under mild ether anaesthesia and the liver was removed from each animal after dissection. The liver tissue was excised from the animals, washed with the normal saline to remove blood, fixed in 10% buffered neutral formalin for 12 hours and processed for paraffin embedding. Sections of 5µm thickness were cut using a rotary microtome. The sections were processed and passed through graded alcohol series, stained with alum haematoxylin and eosin, cleared in xylene and cover slipped in DPX. Histological examination was done under microscope. 20 Some of the slides were subjected to Periodic Acid Schiff (PAS) staining as fat droplets stain negative to PAS stain.

Ethanolic extract of Mimosa pudica did not produce any toxic symptoms or mortality upto the dose level of 2000 mg/kg body weight in rats, and hence the extract was considered to be safe and non-toxic for further pharmacological screening.

Effects of different treatment groups on weight of liver:

In the induced group i.e Group B there is an increase in the weight of liver as compared to control group i.e Group A and Group C, the group that received ethanolic extract of the leaves of Mimosa pudica (400mg/kg). See Table 2.

TABLE 2: COMPARISON OF EFFECTS OF DIFFERENT TREATMENT GROUPS ON THE WEIGHT OF LIVER 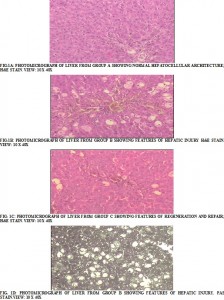 DISCUSSION: In the living system liver is considered to be highly sensitive to toxic agents. Most of the hepatotoxic chemicals damage liver cells mainly by inducing lipid peroxidation and other oxidative damages. Herbal medicine is based on the principle that plants contain some natural substances that can promote health and cure illness.4 The most important of these biologically active constituents of plants are alkaloids, flavonoids, tannins and phenolic compounds. Upon literature review it was found that Mimosa pudica possessed antioxidant properties and could very well serve as a hepatoprotective agent. The ethanolic extract of the leaves possesses different phytoconstituents like alkaloids, flavonoids, tannins, saponins, coumarin, terpenoids and phenlols. Flavonal aglycone and their glycosides are potent antioxidants which can prevent degenerative diseases and dyslipidemia.21

Dyslipidemia is a key health concern in India and other developing countries, which paves the way to conditions like atherosclerosis, stroke etc which can be critical in the long run. Dyslipidemia, leads to disturbed homeostasis of fatty acids, triglycerides and lipoproteins.23 Dyslipidemia leads to damages in different tissues,that can unbalance the cellular functions leading to several pathological conditions.

Also, Hashemi JM, in his study observed that serum VLDL levels were raised in albino rats treated with CCl4 and this was reversed by treatment with Hibiscus Sabdariffa Calyx extract.24 In our study also, we observed that raised serum VLDL level in albino rats treated with CCl4 was reversed following treatment with Mimosa pudica leaf extract.

Also, in our study, a comparative histopathological study of the liver from different groups, also shows the efficacy of Mimosa pudica linn in reversing fatty liver changes like increased fatty infiltration, signs of inflammation and necrosis, distorted architecture of hepatic cells.25 Hence it can be considered that as fatty liver is associated with dyslipidemia, therefore a drug which can reverse fatty changes in the liver can also afford protection against dyslipidemia.

When we compared serum HDL levels amongst the three groups, we observed that, when the induced group (Group B) and the test group (Group C) were compared with control group (group A), they revealed highly significant (p< 0.01) and significant (p < 0.05) lowering of serum HDL. However we could not demonstrate any significant effect on HDL cholesterol levels of Mimosa pudica leaf extract as compared to the induced group. So, it is not evident how much beneficial effect Mimosa extract has on HDL levels.  Hence, further detailed studies are anticipated in the future which could reflect more on this aspect.

When we observed the liver size, we found that Group B showed highly significant (p <0.01) increase in liver size as compared to Group A. Eidi A et al in his study hepatoprotective effects of Pantothenic acid on carbon tetrachloride-induced toxicity in rats observed increase in weight of liver of albino rats treated with CCl4.26 Then when we compared between Group C and Group B we observed that Group C showed a significant reduction in liver size as compared to group B. So it can be considered that treatment with Mimosa pudica leaf extract reduced liver size in CCl4 treated patients.

In conclusion, from all the above findings, our study demonstrates that the ethanolic extract of leaves of Mimosa pudica can be an effective treatment against dyslipidemia following hepatic injury and that future advanced research in this field might revolutionize the treatment of liver disorders.

ACKNOWLEDGEMENTS: We wish to thank our colleagues from the departments of Biochemistry and Pathology, Silchar Medical College and Hospital for cooperating with us and helping us to achieve what we desired to. We would like to thank M/s Segma Sales, Silchar, for providing us with all the materials within the desired time. Also we would like to thank ADRs monitoring centre, Pharmacovigilance Programme of India (PvPI) under Indian Pharmacoepia Commission (IPC) for their support during the research.

Conflict of interest: None declared