IDENTIFICATION AND ANTIMICROBIAL ACTIVITY OF SAPONIN FRACTION FROM THE LEAVES OF BARLERIA CRISTATA L.

IDENTIFICATION AND ANTIMICROBIAL ACTIVITY OF SAPONIN FRACTION FROM THE LEAVES OF BARLERIA CRISTATA L.

A simple HPTLC method was used to determine the saponin profile of Barleria cristata L. crude leaf extract. The antimicrobial activity of saponin fraction from the leaves of Barleria cristata L. was studied in-vitro against four bacterial species and four fungal species by agar disc diffusion method. Klebsiella Pneumonia, Staphylococcus aureus, E. coli, Aspergillus parasites were the most inhibited microorganism. The present study suggests that the saponin fraction possess significant antimicrobial activity and can be used to develop a potential antimicrobial agent.

INTRODUCTION: Medicinal plants are widely used for the treatment of human diseases all over the world because they contain components with therapeutic value 1. According to World Health Organisation (WHO) more than 80% of the world’s population relies on traditional medicine for their primary healthcare needs.

The medicinal value of plants lies in some chemical substance that produces a definite physiological action on the human body. The most important of these bioactive compounds are alkaloids, saponins, flavonoids, tannins and phenolic compounds 2. Diseases that have been managed traditionally using medicinal plants include malaria, diarrhoea, dysentery, fungal and bacterial infections, respiratory infection and skin diseases 3, 4. In the last few years, a number of studies have been conducted to prove that plant has antimicrobial activity. Most of the studies reported were using crude extracts 5, 6. But studies with purified plant compounds are very scanty.

Barleria cristata L. is a shrub found widely in subtropical Himalaya, Sikkim, Central and South India. It has various medicinal and therapeutic uses. Different parts of Barleria cristata L. have been used in the treatment of various diseases like anemia, toothache and cough. Root and leaves are used in the treatment of swelling and inflammation 7.

Although synthetic and semi synthetic antimicrobial drugs available in various markets today  there is a need for new one to cope with the increased evolution of multiple antimicrobial resistant strains of organisms 15. Numerous methods have been previously reported for the determination of saponins in the plant extract. In the present study a simple HPTLC method was used for the qualitative identification of saponins and antimicrobial potential of pure saponin fraction from the leaves of Barleria cristata L.

Extraction of sample for HPTLC analysis: The dried Barleria cristata L. leaf powder (5 gm) was extracted with 100 ml of methanol in soxlet apparatus for 6 hours and filtered the extract through what man No.1 filter paper. The crude extract was condensed by using vacuum evaporator. The residues were dissolved in methanol and made up to 20 ml. This solution was used as test solution for analysis.

Procedure: Before spotting the HPTLC plate was prewashed with methanol. The test solution was applied as 10 mm sharp band by means of Linomat 5 sample applicator. The spot was air dried. The mobile phase solvent was (25 ml) poured into a twin trough glass chamber and was left to equilibrate for 15 minutes. Then the plate was placed in the chamber. The plate was developed until the solvent front had travelled at a distance of 8 cm above the base of the plate. The plate was removed and air dried to evaporate solvents from the plate16.

Then, the plate was kept in photodocumentation chamber and viewed under white light, UV – 254 nm and UV - 366 nm wavelength light from Reprostar – 3. Then the plate was sprayed with respective spraying reagent for saponins (for derivatization) and kept in hot air oven at 1200C for 5 minutes. The plate was cooled and scanned at 500 nm for saponins using TLC scanner-3. The peak areas were observed from the peak table.

Preparation of pure saponin fraction for antimicrobial activity study: The powdered leaf sample was defatted by petroleum ether for 3 hours at 40oC. After filtering the petroleum ether, the sample was extracted with methanol for 3 hours with mild heating 17. The combined methanol extract was concentrated and methanol extract of sample was obtained. To get crude saponin extract the sample was dissolved in methanol and acetone (1: 5 v/v) to precipitate the saponins 18. The precipitate was dried under vacuum to get whitish amorphous powder named as crude saponin extract (CSE). To get pure saponin fraction (PSF), certain amount of CSE was fractioned by applying to Merck silica gel60 (230-400 mesh) column chromatograph and eluted with chloroform – methanol – water (70: 30: 10) 19. Five fractions were collected and were evaporated under reduced temperature. Fraction 1was chosen based on the level of total saponin concentration 20.

Antibacterial and Antifungal activity: The antibacterial and antifungal activity analyses were carried out by disc diffusion technique. The bacterial strains were inoculated into nutrient broth and incubated. The turbidity of culture was standardized to that of Mc Farland standards. Muller Hinton agar solid medium was used for culturing bacteria. The standardized inocula were spread on the petriplates and the discs impregnated in pure saponin fraction and standard Ciprofloxacin (5 µg/disc) discs were placed with the help of sterile forceps. The plates were incubated at 370C for 24 hours.

Each fungal culture inocula was evenly spread on sabourand Dextrose agar using a sterile swab. The Clotrimazole (10 µg/disc) standard disc and pure saponin fraction soaked discs were placed. The plates were incubated at 37oC for 48 hours. At the end of incubation, the inhibition zones formed were measured using a vernier calliper. Average diameter of two of each zones were calculated. All the experiments were done in 3 replicates.

The green, violet, yellow, brown coloured zones at Rf value 0.28, 0.32, 0.4, 0.46 and 0.64 present in the chromatogram confirm the presence of saponins in the sample. The total saponin content of crude leaf extract is 3.48 ± 0.527 mg% and the table 1 and figure 1 confirms the occurrence of 5 different saponin compounds in the leaf extract.

* Compounds not related to Saponins 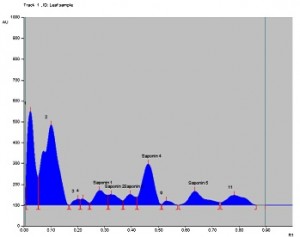 The total saponin concentration of fraction 1 was 15 mg/ml. The pure saponin fraction of the plant studied showed various antimicrobial activities against the microorganisms tested. Among the four bacterial pathogens tested, the saponin fraction extract was found to be effective against Klebsiella pneumonia (10 mm), S.aureus (9 mm), E. coli (9 mm) followed by Salmonella paratyphi (8 mm). The zone of inhibition by the pure saponin was comparable with the standard Ciprofloxacin (5 µg/disc) antibiotics. 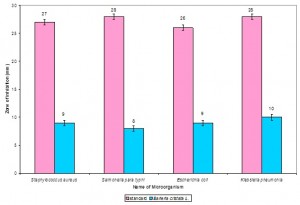 DISCUSSION: The results obtained from this study revealed that the pure saponin fraction of the plant contained saponins connected with antimicrobial properties. Many scientists 21, 22, 23 have been screening the antifungal activity of medicinal plants against dermatophytes but in this study first attempt was made to invegtigate the antimicrobial activity of pure saponin fraction of medicinal plant Barleria cristata L. against dermatophytic fungi like Aspergillus niger.

CONCLUSION: The results of this study suggest that the plant saponins can be used as therapeutic agents in the development of new drugs for the treatment of infectious diseases.

ACKNOWLEDGEMENT: Authors are thankful to The HOD, Biochemistry Department and Principal, PSG College of Arts and Science, Coimbatore, for providing all the facilities to carry out this research.