ABSTRACT: The present investigation reports the fungal Aflatoxins contamination in groundnut samples collected in different locations in the Rayalaseema area, Andhra Pradesh, India. Aflatoxins were extracted by liquid-liquid extraction method using chloroform solvent. The qualitative and quantitative analysis of aflatoxins present in the samples was done using TLC and HPLC techniques. Among the eight samples in the study two samples S3 and S6 were less infected with aflatoxin-producing fungi, and hence aflatoxins were detected in HPLC study. Samples S1 and S4 consist of only B2 and G2 aflatoxins respectively. The chromatogram obtained for sample S2 shows two peaks representing G2, B2 aflatoxins with 0.84 ng/g, 13.0 ng/g quantity. Sample S5 was also found to have two peaks representing G2, B2 aflatoxins with 10.9 ng/g, 0.55 ng/g quantity respectively. Sample S8 chromatogram consists of two peaks represents aflatoxin G1 and G2 with 0.89 ng/g, 13.3 ng/g quantity respectively. Among the samples in the study, a high number of aflatoxins was identified in sample S7. In S7 sample aflatoxin G1, G2 and B2 were identified. The quantity of aflatoxin G1 was found to be very high (20.6 ng/g) and Remaining aflatoxins G2 and B2 were found to be 3.7 ng/g, 4.7 ng/g respectively. Based on the results findings for the analysis of aflatoxins in groundnut samples six samples were found to be contaminated with aflatoxins. Even though the aflatoxins content found less amount, crop management practices that reduce infection in the field and during harvesting may help to prevent the contamination of ground nuts from fungal strains.

INTRODUCTION: Aflatoxins are mycotoxins produced by two species of Aspergillus, a fungus found especially in areas with hot and humid climates 1. These aflatoxins are occurred in food products such as groundnuts, tree nuts, maize, rice, figs and other dried foods, spices, crude vegetable oils, and cocoa beans, as a result of fungal contamination before and after harvest.

14 aflatoxins are mostly studied and among them only six of these molecules (B1, B2, G1, G2, M1, and M2) are normally found in foods. The most toxic among all types, aflatoxin B1, is produced by both A. flavus and A. parasiticus 2, 3.

As aflatoxins are known to be genotoxic and carcinogenic, exposure through food should be kept as low as possible. Because of potential health hazards to humans, regulatory levels have recently been documented. Currently, the worldwide range of limits for aflatoxin B1 (AFB1) and total AF (AFT) are 1-20 and 0-35 ng/g, respectively 4-8. Many researchers have developed several methods for the determination of aflatoxins in food items 9-13.

Collection of Samples: The groundnut samples used for aflatoxin analysis were collected in godowns, oil refinery situated in Jammalamadugu, Proddatur, Kadapa, and Kurnool situated in Rayalaseema, Andhra Pradesh, India. The sample collection details and codes for collected samples were given in Table 1.

Extraction of Aflatoxins from GroundNut Samples: The method described by Ghali et al., 2009 27 was used for the extraction of aflatoxins, briefly an accurate 10 g ground-up test sample was extracted with 40 mL methanol and water (80:20, v/v) solution by shaking vigorously for 30 min in a sealed flask. One g of sodium chloride and 20 mL of n-hexane were added before the extraction. The extract was filtered through Whatman no. 5 filter paper. The filtrate was centrifuged for 15 min at 4000 × g and the upper hexane phase was discarded while the lower methanol phase was used.

TLC Separation of Aflatoxins: The plate was first eluted with anhydrous ethyl ether, dried up in a fume hood for 5 min, and developed with chloroform and acetone in the ratio of 9:1 (v/v) at same direction 28. The TLC plate was visually examined under ultraviolet light at 366 nm.

Method Conditions: HPLC analysis was carried for the quantification of Aflatoxins present in the samples. For HPLC analysis, the method described by Saqer et al., 2009 29 was adopted. Chromatographic separation was carried on Inertsil ODS C-18 (250 × 4.6 mm; 5µ id) column using water, acetonitrile, and methanol in the ratio of 60:20:20 (v/v) as mobile Phase at a flow rate of 1.0 ml/min. UV detection was carried at a wavelength of 365 nm. A sample volume of 20 µL was injected into the HPLC column maintained at 40 ºC.

Construction of Calibration Curve: The prepared aflatoxins calibration curve dilutions were analyzed in the HPLC method. 10 mg of the standard was accurately weighed and dissolved into 100 ml of methanol to prepare a standard stock solution of 10 µg/ml. This standard solution was further diluted to prepare 0.5, 1.0, 1.5, 2.0, 2.5, 3.0 µg/ml. The peak area response of each aflatoxin was used for the construction of the calibration curve by considering prepared concentrations on x-axis and peak area response on the y-axis.

The obtained regression equation was used for the estimation of aflatoxin content in Groundnut samples. An equal volume of the prepared four aflatoxins B1, B2, G1 and G2 were mixed, and the mixed solution was used for HPLC analysis. Individual standards also analyzed in the same conditions for the identification of compounds in combined solutions.

RESULTS AND DISCUSSION: Most agricultural commodities are susceptible to several diseases caused by fungi, viruses and insect pests. Fungi are free-living organisms capable of surviving in the environment (soil, air, and water) and can easily find their way into crop products especially when the weather conditions are suitable. They are also surviving in the soil without crops. They cause diseases that may contaminate the crops with deadly toxins. The toxins produced by fungi are called mycotoxins (Myco=fungus; toxin=poison). Aspergillus flavus and Aspergillus parasiticus have also been reported as a pathogen of man, animal, and plant. Aflatoxins produce by these fungal strains are reported as the most potent hepatocarcinogens among all the known natural and synthetic compounds. A very small amount of aflatoxin in the feed (10-20 ppb) can produce fatal liver cancer in young animals.

Aflatoxins have also been implicated in human diseases. Groundnut is an important crop in India where thousands of tons are being produced annually for domestic use and also for exporting to various countries. Rayalaseema area in Andhra Pradesh is popular for growing groundnut crop across its four districts. Various storage go downs, and oil extraction units are located in these districts. This study demonstrated that aflatoxins B2, G1 and G2 were detected in contaminated groundnut samples collected in various areas of Rayalaseema as shown in Table 1. In particular, groundnut samples collected from Rural godowns, Kurnool (S7) consist of a high amount of Aflatoxin G2 (20ng/g). However, aflatoxins were not detected in all of the collected samples.

Qualitative determination of the presence of aflatoxins was done by thin layer chromatography in the samples. TLC results show prominent spots for each aflatoxin. Total 8 extracted samples were subjected to TLC, and among them, two samples S3 and S6 were found negative to identify any spots on the plates. Sample S7 shows three spots indicating the presence of three aflatoxins in the sample. Samples S2, S5, and S9 shows two spots and remaining are found to have only one spot on it. The results of aflatoxin TLC separation study were given in Fig. 2. 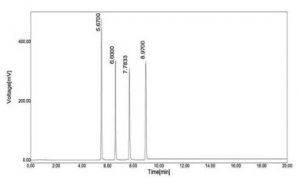 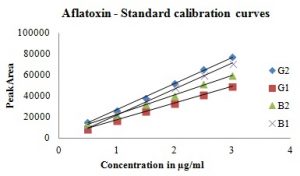 The values obtained were high in some samples but within the effective limit and could present a direct health risk and an economic liability to farmers if these are typical currently. This study may be the first study to determine the concentration of aflatoxins in groundnut samples in Rayalaseema district. However, not all the groundnut samples measured were contaminated with aflatoxins. Some of them had concentrations of aflatoxins below the detection limit of our analytical methods.

Therefore, comprehensive investigations of the aflatoxin contamination source are needed to address this question. Stain identification study on fungal species found on contaminated groundnut samples may help to determine which fungal species associated with the nuts for the release of aflatoxins. Crop management practices that reduce infection in the field and harvesting may help to prevent the contamination of ground nuts from fungal strains.

ACKNOWLEDGEMENT: One of the authors (O. Sailaja) is thankful to the management of KBN College for their support to do the Ph.D. work.