ABSTRACT: Objective: To identify and quantify oleanolic acid from the roots of cyclea peltata by HPTLC method. Methods: The Plant cyclea peltata is a perennial herb from Menispermacae family. The powdered roots of plant cyclea peltata were extracted with methanol. Methanolic extract prepared separated with n-butanol, chloroform, and ethyl acetate as total saponin, total alkaloid and phenolic compound fractions respectively. The chemical characterization of oleanolic acid was done by High-Performance Thin Layer Chromatography (HPTLC) in a mixture of toluene: methanol (9:1) as a mobile phase which developed in anisaldehyde sulphuric acid reagent. Result: The extraction yield of total saponin fraction was 4.3% (w/w). The Rf value 0.31 found to same as the value of standard oleanolic acid. Linear regression analysis data for the calibration plots showed a good linear relationship between concentration (1-6 μg) R (r2) = 0.992408 concerning peak height and area. The limit of detection and limit of quantification of Oleanolic acid were detected to be 10.75 μg and 40.70 μg per spot. The amount of oleanolic acid in the methanol extract of roots was found to be 3.442 μg. Conclusion: Based on HPTLC result and its interpretation, it can be concluded that oleanolic acid present in roots of cyclea peltata which give identical, characteristic signals and absorbance similar to earlier reported reference standards.

INTRODUCTION: Chromatographic and Spectrophotometric techniques are the most useful and popular method for qualitative and semi-quantitative estimation of phytoconstituents. The advancement of TLC is High-Performance Thin Layer Chromatography (HPTLC) which provide an electronic image of chromatographic fingerprint and densitogram to detect the presence of a marker compound in the plant sample 1.

As per WHO guidelines, it is an important parameter for proper standardization of herbs and formulation. HPTLC evaluates the entire chromatogram with a variety of parameters without time limits. Moreover there is the simultaneous but independent development of multiple samples and standards on each plate, leading to increased reliability of results. The HPTLC fingerprint has better resolution and estimation of active constituent in shorter time 2.

As per flora of India, the plant cyclea peltata was identified by Hooker F & Thomson in the year 1855 3. The genus cyclea was proposed and characterized by Arnott which was adopted by Miers from family Menispermacae.

According to traditional ayurvedic medicine, it is used by a group of Asian indigenous people (Nagas) for fighting against evil spirits 3, 5. In the market, three plants Cissampelos pareira, Cyclea peltata, and Stephania japonica (Fam. Menispermaceae) are being used as a source of patha 27. Research Organization for Oriental Traditions and Sciences (ROOTS) in India shows Cyclea peltata as one of the ingredients in an ayurvedic preparation called diabe drink to manage diabetes mellitus 5.

It widely distributed in food and plants. Oleanolic acid can be found in olive oil, garlic, leaves of rosemary leaves, marigold roots, woods, etc. In nature, the compound exists either as a free acid or as an aglycone precursor for triterpenoid saponins, which linked to one or more sugar chains 8-9. Oleanolic acid and its derivatives possess several promising pharmacological activities, such as wound healing, anti-inflammatory, antibacterial, antiviral, hepatoprotective and anti-tumor effects 10-11.

Literature review reveals that a study has been done only on particular method for isolation and characterization of phytochemicals from alkaloid fraction 12-14. Hence, in this present study gives a clear idea in identification and quantification of the triterpenoid oleanolic acid first time in saponin fraction of Cyclea peltata.

Preparation of Plant Extracts: The air-dried roots of Cyclea peltata were first powdered coarsely in a grinder. 150 gm of coarse powder exhaustively extracted by hot percolation or successive solvent extraction method, using Soxhlet apparatus started with solvents petroleum ether < Chloroform < Methanol < Ethanol < Water. The same Marc was used for each solvent until complete extraction carried out. Before using the same marc, after initial solvent it was dried in an oven and then again used for extraction with next solvent 16-17. The methanolic extract was concentrated in vacuum to give residue 20 gm. Water was added to it and then partitioned with n-butanol, chloroform and ethyl acetate with the help of liquid-liquid extraction method by using separating funnel to separate total saponin, total alkaloid, and total phenolic compound. The n-butanol fraction was concentrated under vacuum and residue remain was total saponin fraction (6.5 g). For HPTLC fingerprinting, 500 mg of n-Butanol Fraction was dissolved in 10 ml of methanol solvent, to give concentration 50 μgμL-1.

All these fractions are containing different phytochemicals separated by thin layer chromatography (HPTLC).

TLC (Thin Layer Chromatography) Profile: TLC and HPTLC studies were carried out by following methods of Wagner et al., 16 and Stahl 17 respectively. For the separation of a different plant compound in saponin fraction (n-butanol) of Cyclea peltata, it was spotted manually using a capillary tube on precoated silica gel G TLC plates. The spotted plates were put into solvent system chloroform: methanol (9:1) for separation. After separation, it was developed in iodine chamber for identification of the respective compound. Rf value was calculated by the formula:

HPTLC Chromatographic Analysis Experiments: The HPTLC was performed at Anchrome Laboratories Privet Limited, Mulund, Mumbai. Chromatography was performed on pre-activated (100 mesh silica gel 60F254) HPTLC plates (20 cm × 10 cm; 0.25 mm layer thickness; Merck) as the stationary phase. The CAMAG densitometry (Camag Model-3 TLC scanner equipped with Camag CATS 4 software), a reflectance spectrometer of monitoring range 190–700 nm was employed for the analysis. Standards (1 µl, 2 µl, 3 µl, 4 µl, 5 µl, 6 µl, 7 µl) and samples (4 µl, 4 µl, 4 µl and 6 µl, 6 µl, 6 µl) were applied to the layers at 8 mm wide bands, positioned 12.4 mm from the bottom of the plate, using a Camag (Mutten, Switzerland) Linomat V automated TLC applicator with nitrogen flow providing delivery from the syringe at a speed of 15 µl/s was maintained for all analyses. TLC plate development was performed using a Camag twin trough glass tank, which had been pre-saturated with the mobile phase for 25 min. The solvent was allowed to run up the plate to a height of 8 cm. TLC analysis was made at room temperature. A mixture of toluene: methanol (9:1) was used as a mobile phase for oleanolic acid after development, the layers were dried and the components were visualized by UV light at 525 nm and 366 nm 17-18. The quantitative determination was performed by win CATS software program using the external calibration method.

Method of Development of HPTLC 19: After the development, TLC plate was then removed, dried completely and detected with the suitable detection system as anisaldehyde sulphuric acid reagent by heating at 100 degrees for 3 min on the heater (TLC plate heater, CAMAG). The UV cabinet system used for detection of spots. Further, it was scanned with the Densitometer (CAMAG, Switzerland) under the UV range of 366 nm 20, 21. A corresponding densitogram was then obtained in which peaks appear for the corresponding spots being detected in the densitometer while scanning. The peak area under the curve (AUC) corresponds to the concentration of the component in the sample of saponin fraction of methanolic extract on the TLC plate being detected Table 2.

RESULTS AND DISCUSSION: A preliminary TLC pattern of oleanolic acid was performed for the identification Fig. 1.

Qualitatively HPTLC fingerprints of chloroform, ethyl acetate and n-butanol fraction are shown in Fig. 2, 3, and 4, respectively. 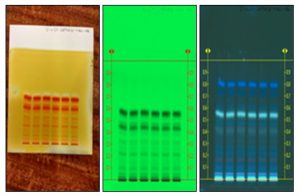 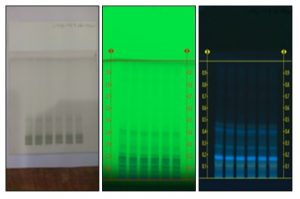 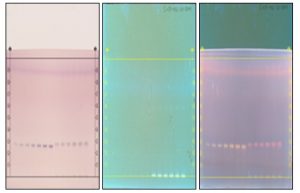 The system precision was performed by spotting 6 samples from each standard stock solution Table 1. Comparison of the spectral characteristic for standards and sample revealed the identity of standards in saponin fraction (n-butanol residue) of methanolic extract was observed in 1-6 µg/ml Fig. 5. The correlation coefficient(r) value was found to be 0.992408 with respect to peak height and area Table 2, indicated a good linear dependence of peak area on concentration. The calibration curve was represented by the linearity equation Y= 1.197 × 10-6 + 2.968 × 10-4 concerning area where Y is peak height/area, and X is a concentration of oleanolic acid. The concentration of oleanolic acid in saponin fraction was 688.5ng/ml (3.442 μg in 500.00 mg extract).

The illustration of the HPTLC scanned chromatogram of standard markers and saponin fraction Fig. 4 able to resolved five compounds in developing the solvent system, which produced good separation with Rf values of fraction 0.06, 0.14, 0.18, 0.31, 0.89. The desired resolution of the triterpenoid oleanolic acid peak was detected by densitometry image analysis Fig.9, 10 and 11 22-23.

TABLE 2: HPTLC PROFILE OF THE n-BUTANOL FRACTION OF CYCLEA PELTATA FOR SAPONIN 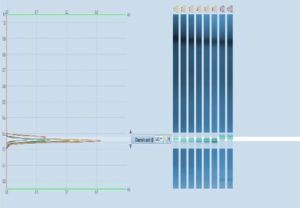 Linearity: The linearity was obtained by analyzing six standard oleanolic acid solutions (as mentioned earlier), and a representative calibration curve of oleanolic acid was obtained. The result indicated a good linear relationship between the concentrations and peak areas Fig. 7, 8.

Precision: Precision was determined at two levels. i.e. repeatability and intermediate precision. It is expressed as the variance, SD or coefficient of variation of series of measurements the intraday instrumental precision was determined by analyzing three individual spots for compound applied on to different plates on the same day with concentration 4,4 and 6,6 μg.

HPTLC fingerprint profile of alkaloid and phenolic compound fraction was developed in respective solvent system and identified in different visualizing agent as per Stahl 20, 28-29 Fig. 3 and 4 respectively).

ACKNOWLEDGEMENT: This work was supported by the Department of Botany, Dr. B. A. M. University, Aurangabad (MS) India, by authentication of plant samples. The authors are also thankful to the Anchrom test Laboratory, Mulund (E), Mumbai for utilizing the HPTLC facility.

CONFLICT OF INTEREST: The author has declared no conflict of interest.