ABSTRACT: Objective: Active chemical constituent in plants exhibits pharmacological action. Hence this research work aimed to identify and quantitate oleanolic acid. Methods: A simple, high-performance thin-layer chromatography (HPTLC) is developed and validated to identify and quantify oleanolic acid. The extracts were spotted as bands on aluminum TLC plates which were pre-coated with silica gel. Different compositions of mobile phase tried for high resolution and reproducible results. Mobile phase composition toluene: methanol: ethyl acetate (8.5:1:0.5 V/V) utilized. Plates were derivatized with 10% sulphuric acid and scanned. Oleanolic acid was detected quantitatively at 529nm. Result: In the selected mobile phase, Rf  value for oleanolic acid was found to be 0.35, which indicated a good separation. The Chromatography method was validated with respect to  Linearity range (ng), Intraday and Interday precision, Instrumental Precision, Quantitation Limit i.e., LOQ (ng), Detection Limit, i.e., LOD (ng), Repeatability for oleanolic acid as per ICH guidelines. Oleanolic acid calibration graph in 200-1200 ng range per band was found linear with correlation coefficient value 0.998. All the parameters obeyed acceptable criteria as per the ICH guidelines. In the extract, the oleanolic acid was found 0.29% w/w. Hence the recently developed HPTLC technique was found prompt, cost-effective, precise, simple, accurate, reproducible, and rapid for analysis of quantity and quality of oleanolic acid in stem and roots petroleum ether extract of Achyranthes aspera. For other chromatographic techniques, this validated method of HPTLC may be useful as an economical alternative.

INTRODUCTION: Achyranthes aspera (Aghada) family Amaranthaceae, is also called as Apamarga in Sanskrit, is a tiny herb found throughout India, and it possesses many medicinal properties and is effective in bronchitis, rheumatism, and cough, malarial fever, hypertension, diabetes, asthma, and dysentery 1-3.

The plant is a useful medicinal herb and is found as a weed in all regions of India. Around 80% of World’s population relies on traditional herbs for initial medical care. Now a day’s peoples prefer medicines obtained from herbs to avoid the side effects of allopathic medicines 4.

The seeds and leaves of plant Achyranthes aspera is emetic and are helpful to treat hydrophobia. Chewing and rubbing of spikes of the herb are good for the health of teeth and gums 8. Herb Achyranthes aspera also shows anti-inflammatory and anti-arthritic and hypoglycemic Activity 9, 10. Various extracts obtained from Achyranthes aspera roots show spermicidal activity in rats and human sperms 11. Extract of the herb also shows wound healing and immunomodulatory activities 12, 13. Achyranthes aspera leaves extract antiperoxidative and prothyrodic activity 14. High-Performance Thin Layer Chromatography is an automated and sophisticated form of Thin Layer Chromatography. It is characterized by better separation efficiency, accurate sample application, standardized chromatogram development, and software-controlled evaluation 15. HPTLC is a versatile, economic and flexible process. Drug extracts could be spotted directly on HPTLC plates 16. HPTLC can accomplish the assay of various components in the multi-component formulation. Identification of various species of plants, evaluation of stability and consistency of their preparations is possible by collaboration with chromatography 17. Oleanolic acid is the chief active constituent present in Achyranthes aspera and is isolated from different plant parts. It is a pentacyclic triterpenoid abundantly present in plants of the Oleaceae family, such as olive plant 18. Hence, this work aimed to detect the concentration of oleanolic acid in stems and roots extract of Achyranthes aspera using HPTLC.

The collected Achyranthes aspera plant was taxonomically identified by the Head of Department Botany, MVP Samaj’s K.T.H.M. College, Nashik, with specimen No. 13-14/01. Roots and stems were separated, washed and dried in the shade and powdered. Dried powder of the roots and stems of Achyranthes aspera was extracted by sequential Soxhlet method using petroleum ether as solvent. The extract was collected and preserved in a tightly closed container.

Oleanolic Acid Stock Solution Preparation in Petroleum Ether: For preparing a stock solution, 1 mg oleanolic acid was dissolved in petroleum ether. This mixture is sonicated until oleanolic acid gets dissolved. In 10ml of the volumetric flask by adding petroleum ether, the final volume was adjusted up10mlto get a concentration 100µg/ml.

Sample Solution Preparation: The successive Soxhlet method extracted 80 gm of stem and root powder using petroleum ether as solvent. The extract was evaporated on a water bath. Weighed 10mg of solid residue, transferred it into the 10 ml volumetric flask.  Added 4-5 ml of petroleum ether in a flask and sonicated the flask. The final volume was adjusted up to a total 10 ml by adding petroleum ether. Using Whatman filter paper, the prepared solution was filtered to separate the undissolved particles.

Chromatographic Conditions: Chromatography was performed on HPTLC silica gel 60 F254 aluminium backed plates, pre-washed using methanol, and dried for about 20 min at 105°C in oven. Samples (10µl) were spotted as 6 mm bands, starting from 45 mm from the edge of the plates, using a Camag Linomat V sample applicator. The plates developed in the twin trough chamber of Camag, which was previously equilibrated with mobile phasetoluene: methanol: ethyl acetate (8.5:1:0.5V/V). Sample spots were given to a distance of about 80 mm above a position with the help of Camag Linomat V Applicator. Chromatographic plates after development were dried at normal temperature. Before densitometry scanning, plates were heated in the oven for 5 minutes at 105°C. Plates were subjected for densitometry evaluation at 529 nm with Camag Scanner III and tungsten lamp and CATS software for quantification.  Slit dimension was 5.00Χ0.30 mm. Plates scanned in absorbance mode.

Quantification of Oleanolic Acid in Roots and Stem Extract: 10 µl roots and stem extract and oleanolic acid solution was applied in linear range on plate and developed according to the method described in the manuscript. Using line equation oleanolic acid concentration in stem and roots extract was calculated.

Linearity: On the plate, oleanolic acid solutions having different concentrations (200-1200ng ml-1) were applied, and the plate was developed, spots were derivatized and detector responses obtained for different concentrations were measured at 529 nm. The results were obtained in triplicates. A graph of oleanolic acid concentration versus peak area was plotted. Data were analyzed using linear regression least-squares fitting as indicated in Table 1 and Fig. 1.

Detection of Oleanolic Acid Content in Achyranthes aspera Extract: Oleanolic acid content in extract was detected by spotting extract along with a standard oleanolic acid solution on HPTLC plate. The recorded peaks are as provided in Table 2. 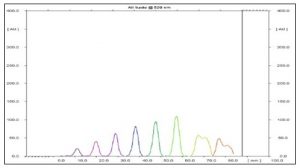 Precision: 10 µl Oleanolic acid solutions in six bands were applied on the plate. After the development of chromatographic plates, spots detection was performed at 529nm. Mean standard deviation and % RSD were calculated. To study interday and intraday precision, oleanolic acid 200, 400, 600 ng/spot aliquots were used. The experiment was repeated and performed thrice. Obtained results are mentioned in Table 3 and Table 4.

LOD: Detection Limit is the lowest concentration present in sample that gives a measurable response.

Detection Limit can be calculated by formula:

Where σ = standard deviation of response

LOQ: Quantitation Limit is the lowest concentration of an oleanolic acid, which gives response that can be quantified.

Where σ = standard deviation of response.

S = slope of the calibration curve.

From the calibration curve of the oleanolic acid slope, S can be calculated.

Limit of Detection and Quantitation Limit was found at 6.93ng and 21.3ng, respectively. 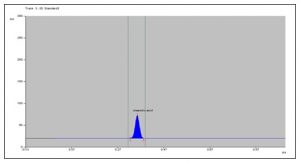 Repeatability: Estimating the repeatability analysis for oleanolic acid application showed % RSD for peak area, which was found 0.55 as indicated in Table 5 and Fig. 5. This method is possibly used to determine the oleanolic acid concentration present in extract and formulations. 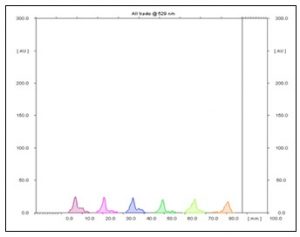 CONCLUSION: An original HPTLC method became advanced for identification and for determination of the quantity of oleanolic acid. The main characteristics of this method found are satisfactory accuracy, precision, faster speed, and economical. The developed method was successfully validated as stated by ICH guidelines.  The oleanolic acid concentration in plants and herbal formulations can be possibly detected using this method.

ACKNOWLEDGEMENT: We are thankful to Dr. R. S. Bhambar, Principal, M.G.V’s Pharmacy College, Panchavati, Nashik, for providing us facilities for this work and research.