Categories Menu
Home » IDENTIFICATION, METHOD DEVELOPMENT AND METHOD VALIDATION FOR THE PROCESS AND DEGRADATION IMPURITIES OF VARDENAFIL HCl BY RP-UPLC AND UPLC-TOF

IDENTIFICATION, METHOD DEVELOPMENT AND METHOD VALIDATION FOR THE PROCESS AND DEGRADATION IMPURITIES OF VARDENAFIL HCl BY RP-UPLC AND UPLC-TOF

IDENTIFICATION, METHOD DEVELOPMENT AND METHOD VALIDATION FOR THE PROCESS AND DEGRADATION IMPURITIES OF VARDENAFIL HCl BY RP-UPLC AND UPLC-TOF

ABSTRACT: This present work is on method development of assay and related substances of Vardenafil HCl and degradation of drug substance under acid, base hydrolysis and oxidation conditions. Identification of the impurities were done by the UPLC-TOF. Waters LCT Premier time of flight HRMS instrument with 5 ppm accuracy employed for degradation impurity identification. The validation of the method for its impurities was done in RP-UPLC chromatography as per the ICH Q2(R1) guidelines and the validation parameters such as specificity with all the process and degradation impurities, linearity, precision, accuracy, solution stability, mobile phase stability, robustness and ruggedness parameters met acceptance criteria as per ICH guidelines.

INTRODUCTION: Vardenafil is PDE5 inhibitor which is used for treating erectile dysfunction, the PDE5 shows degradative action of cGMP-specific phosphodiesterase type 5 (PDE5) on cyclic GMP in the smooth muscle cells lining the blood vessels supplying the corpus cavernosum of the penis. Erectile dysfunction (ED) 15 is sexual dysfunction characterized by the inability to develop or maintain an erection of the penis during activity. The chemical name of vardenafil is 4-[2-Ethoxy-5-(4-ethylpiperazin-1-yl)sulfonyl-phenyl]-9-methyl-7-propyl-3,5,6,8-tetrazabicyclo[4.3.0]nona-3,7,9-trien-2-one.

Fragmentation of each impurity was done by LC-MS/MS Agilent make 6410 model with triple quadrupole with mass hunter software.

LC-MS conditions: Mass conditions were optimized to get the molecular ion by positive mode ionization with single quadrupole of triple quadrupole with gas flow: 10 L min-1, 4000 psi pressure, in the range of 50 m/z to 1600 m/z and the MS/MS fragmentation was done by keeping product ion information. Optimized of fragmentor as 135 and collision energy as 50 s.

Method development and optimization for RP-UPLC: Initial method development trials tried with HPLC, for determination for all process impurities and degradation impurities with mobile phase potassium dihydrogen orthophosphate and acetonitrile as mobile phase and C18 column but the run time was 60 min and the time taken for analysis was more, Potassium di hydrogen phosphate was not LC-MS compatible.

Method developed with HPLC technique has drawbacks like solvent consumption is more, time taken for completion of analysis was more and non-compatibility of buffer with LC-MS/MS. To overcome from these problems,the method was developed by using advanced separation technique, RP-UPLC method  was to determine process impurities and degradation impurities and assay of vardenafil HCl, the analysis time taken for the preparation of mobile phase and solution can be reduced. The initial study was done in ACQUITY UPLC BEH130 C18 1.7µm x 2.1 x 100 mm column because all impurities are having long carbon chain and they are neutral in nature hence initially water and acetonitrile were taken for mobile phase A & B respectively. water, acetonitrile, aqueous TFA, phosphate buffer, ammonium acetate buffer were also attempted, Among all the mobile phases, peak shape and separation found good with combination of ammonium acetate and acetonitrile,

Specificity: Specificity is the ability to assess unequivocally the analyte in presence of components which may be expected to be present. Typically these might include impurities, degradants, matrix, etc.

[ICH Q2], The specificity of Vardenafil HCl and other impurities were examined by RP-UPLC and UPLC-TOF and this study was done for all degradation conditions such as acid, base hydrolysis, oxidation with hydrogen peroxide, thermal condition at 105°C and photolytic degradation with visible fluorescence light of 1.2 million lux hours, 200 watt hrs per square meter, the characterization of degradent impurities and process impurities, was done by UPLC TOF.

Precision: The precision of an analytical procedure expresses the closeness of agreement (degree of scatter) between a series of measurements obtained from multiple sampling of the same homogeneous sample under the prescribed conditions. Precision may be considered in three categories repeatability, intermediate precision and reproducibility.

The precision of an analytical procedure is usually expressed as the variance, standard deviation or coefficient of variation of a series of measurements [ICH Q2 R1].

In this present work repeatability, intermediate precision and reproducibility were done at 0.15% level of all process impurities such as VAR4, VAR5, VAR7, VAR8 in presence of Vardenafil HCl with respect to 0.5 mg/mL concentration, all the method precision parameters % RSD of content met the pre defined criteria, the intermediate precision was done with different instrument, different day.

Linearity: The linearity of an analytical procedure is its ability (within a given range) to obtain test results which are directly proportional to the concentration (amount) of analyte in the sample. The linearity study of the VAR4, VAR5, VAR6, VAR7, VAR8 and Vardenafil HCl was done by LOQ to 0.3% w/w with respect to analyte test concentration (LOQ, 0.05, 0.10, 0.15, 0.20 and 0.30 % w/w), blend solution of all five impurities used for linearity, the regression line was plotted with area versus concentration. The value of the slope, % Y-intercept of the calibration curves were calculated. The relative response factor (RRF) of each impurity was determined by dividing the slope of the each impurity with slope of Vardenafil HCl

Accuracy: The accuracy of an analytical procedure expresses the closeness of agreement between the value which is accepted either as a conventional true value or an accepted reference value and the value found. In this present work the accuracy study was done by placing the 50%, 100%, 150% recovery solution by spiking in test concentration (0.5 mg/mL of the Vardenafil HCl) as 0.15% (100% level), the concentration of Accuracy solution were 0.075%w/w, 0.15%w/w, 0.225%w/w, the recovery of each impurity were calculated against respective impurity such as VAR4, VAR5, VAR6, VAR7, VAR8 in presence of analyte (0.5 mg/mL) the range of recovery was between 80 and 120% and meets the ICHQ2 R1.

Robustness: The robustness of an analytical procedure is a measure of its capacity to remain unaffected by small, but deliberate variations in method parameters and provides an indication of its reliability during normal usage. Robustness study was done by changing the temperature of column compartment, flow and gradient change of mobile phase %B, %RSD meets the ICHQ2 R1 for all the impurities and Vardenafil HCl.

Solution stability and mobile phase stability: The solution stability and mobile phase stability gives the information of the method's reliability in normal usage during the storage of the solutions using, the vardenafil HCl solution at analyte level spiked with 0.15 % w/w and injected 6 hrs, 12 hrs and 48 hrs, the quantification was done against the fresh standard solution of impurities, calculated the % RSD and % difference, both met the ICH Q2 R1. 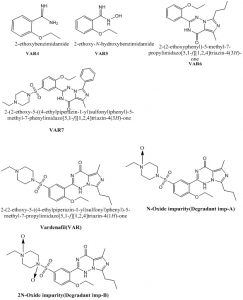 Results of forced degradation: Forced degradation study was done in 3% H2O2 solution, 0.5% NaOH solution, 0.5% HCl solution, thermal degradation at 105°C, photo degradation in visible fluorescence light of 1.2 Million lux hours, and 200 watt hrs/meter square. In 3% H2O2 Vardenafil HCl solution was kept in room temperature up to 4 days. The 0.38 RRT, 0.76 RRT unknown impurities were formed and that impurities were characterized by using UPLC-TOF, where generated the formula by Mass lynx soft ware, confirmed that N-Oxide impurity (Fig. 2) these impurities were showing specificity in this present method and all process impurity also confirmed their structure by using the UPLC-TOF. They were eluting away from the unknown impurities, along with 0.76 RRT, 0.84 RRT, 0.93 RRT impurities were formed along with N-Oxide impurity they were characterized by using UPLC-TOF. The impurity profile of degradation study was presented at Table 1, Table 2 and 3.

Robustness: The robustness study was done on by changing the column oven temperature, flow, wavelength, ratio of mobile phase B, the retention time of all impurities and vardenafil HCl were not changed, the content of spiked impurities matching the initial values. The assay values in the all robustness parameters viz temperature change from 25°C to 30°C and 20°C the assay range was 100.1 to 100.4%, flow of 0.15 mL/min and 0.25 mL/min the assay range was 100.3 and 99.8 % respectively, The change of 10% acetonitrile in gradient, the assay values were 100.0% and 100.2 ratio in low and high ratio mobile phase B. The change wavelength from 240 nm to 235nm and 245 nm assay were 100.1 and 99.96. The results were presented in the Table 5.

Solution stability and Mobile phase stability: The solution and mobile phase stability were studied up to 48 hours, it helps to reduce the time consumption of sample preparation and standard preparations. This study was performed by spiking impurities at 0.15% w/w with respect to test concentration (0.5 mg/mL), the recovery values were in the range of 91.1 %w/w to 106.4 %w/w. The recovery values in quantification levels were acceptable. The recovery study extended up to 48 hrs. Assay study of VAR was done with respect to 0.2 mg/mL. The mobile phase and solution stability were done up to 48 hrs, there was no variation in assay from initial to 48 hrs. 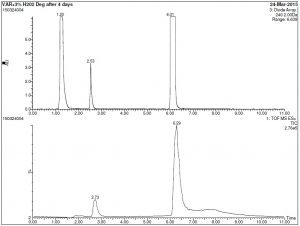 CONCLUSION: The present RP-UPLC method is with less runtime, high specificity with all process and degrading impurities, the mobile phase used in this method is ammonium acetate and acetonitrile, this is LC-MS compatible, the unknown impurities identification and characterization of all impurities were done by using UPLC-TOF, this high resolution spectrometry gives the formula for all unknown and known impurities, the fragmentation pattern of the all impurities were done by LC-MS/MS, All above information of this method gives complete study of method and unknown and known impurities in RP-UPLC, the quality control lab person can perform analysis easily and understand the chemistry of process and analytical method.

ACKNOWLEDGEMENT: The authors grateful to Dr. Reddys’s Group for supporting this work and special thanks to the ARD scientists from Custom Pharmaceutical Services for their continuous support for this valuable work. Communication number IPDO IPM-00497 has been provided for this research article in custom pharmaceutical service.