ABSTRACT: Subgingival obligate anaerobes present within the biofilm such as Porphyromonas gingivalis, Tannerella forsythia, Prevotella intermedia and Aggregati bacter actinomycetemcomitans have been implicated in the initiation and progression of periodontal disease. Recent documentation has demonstrated that P.gingivalis is capable of maintaining its viability when exposed to oxidative stress by expressing Bat A and Bat B genes of the aerotolerance operon acting as virulence factors offering protection and further disease progression in the host. The present study aims to determine the presence of bat A and bat B genes in other periodontopathogenic species viz. Aggregatibacter actinomycetemcomitans, Tannerella forsythia and Prevotella intermedia, and the degree of homology using BLAST analysis

INTRODUCTION: Periodontitis is a polymicrobial, multifactorial infection that affects the tooth supported structures. The periodontal pocket formed as a result of the disease progression, provides a unique dynamic environment for the interaction and intercellular communication between the microbiota present and the host cells. 1 The subtle shift from a gram positive aerobic microflora to a gram negative one teaming with facultative and obligative anaerobic species 2, 3 depends on factors such as temperature, pH, GCF flow and redox potential.4

Despite the heavy dependence on the afore-mentioned factors, characteristic bacterial diversity has been seen to exist where certain anaerobic species still manage to thrive in the initial biofilm formation. Li and co-workers 5 analyzed supragingival plaque over 6 hours of plaque formation. Their findings reported low levels of periodontal pathogens at the initial 4 hours of biofilm formation which included species like Tannerella forsythia, Porphyromonas gingivalis, Treponema denticola and Aggregatibacter actinomycetemcomitans.

These findings were further substantiated by Diaz and co-workers 6 confirming that anaerobic periodontopathogens can colonize early biofilms. This can be attributed to the apical shift of supragingival plaque as it progresses along the gingival sulcus resulting in ecological changes.7 The study of initial subgingival biofilm formation is more challenging due to the lack of models that mimic subgingival colonization or that allow appropriate sampling.8 Hence, it can only be hypothesized as to what factors are responsible for the survival of anaerobic periodontal pathogens in initial biofilm formation.

Kolenbrander and co-workers have proposed that coaggregation and close proximity facilitate bacterial mutualism, which in turn influences biofilm development. 8 Various metabolic interactions can occur at many levels and include nutritional exchange, environmental modification through oxygen detoxification, and small-molecule signal-mediated gene regulation. Though the symbiotic relationship between species might be part of the process that facilitates the survival of anaerobes in plaque, it is likely that there are many situations in which microorganisms are not protected by the overall oxygen metabolism of the microbial community.

In such scenarios, the survival of anaerobes will depend more upon defences against oxidative stress which are specific for each species. Oxidative stress response mechanisms could also be important during the bacterial invasion of host tissues, as a defense against oxygen-dependent killing of neutrophils and macrophages 9 and for survival in blood during bacteremias. In any of these roles, anti-oxidant defence systems are likely to contribute to the virulence of anaerobic microorganisms. The oxidative stress defences of anaerobes have not been widely studied. In contrast to the vast knowledge on anti-oxidant mechanisms operating in aerobes or facultative species, the mechanisms by which obligate anaerobes tolerate oxygen are poorly understood.

It seems that anaerobes have common anti-oxidant defences with aerobes which are not expressed at high levels in anaerobes or they are not all present simultaneously in the same species. Moreover, the metabolism of anaerobes relies on metabolic schemes built around enzymes that react easily with oxygen such as NADH oxidase 10, 11 and superoxide dismutase (SOD). P. gingivalis also possesses an Oxy R protein 6, homologous to that present in many facultative and aerobic microorganisms. 12 Anti-oxidant-relevant genes whose transcription depends on Oxy R have been identified which include genes for SOD, Dps (a nonspecific, protective, DNA-binding protein), tpx (thiol peroxidise), alkylhydroperoxide reductase subunits F and C(ahpC-F operon) 13, rubrerythrin 14, ferritin 15  a heme layer that acts as an oxidative sink to eliminate the effects of hydrogen peroxide and other reactive oxygen species, thus protecting the cell membrane and other cellular components of the organism from oxidative damage.16

It seems then that although anaerobes, such as P. gingivalis, cannot survive highly oxygenated conditions, their own array of anti-oxidant defenses, plus the interaction with neighbouring facultative or aerobic bacterial species, allows them to adapt to oral biofilms. One proposed mechanism is that of aerotolerance, which allows anaerobes to survive in conditions of oxidative stress, although it does not imply that cell replication can occur under aerated conditions. An extensively studied example is that of P. gingivalis, which is able to survive under oxidative stress for several hours until the environment reverts to being anaerobic and cell division and growth are re-initiated.15

In P.gingivalis, the Aerotolerance gene A cluster of genes (PG1582 to PG1586) have been identified, bearing a very similar likeness to the previously described aerotolerance operon of Bacterioides fragilis.17 This operon includes :  PG1582 – Bat A, PG1583 – Bat B, PG1584 – Bat C, PG1585 – Bat D and PG1586 – Bat E which promote the survival of B. fragilis upon exposure to oxygen. Their presence in P. gingivalis suggests that this system may also ensure tolerance to oxygen in the oral cavity.18 Research based on this operon appears to substantiate the role of Bat A and Bat B proteins in promoting the survival of P.gingivalis during oxidative stress.  Therefore, it can be postulated that a similar set of genes may be present amongst other periodontopathogenic anaerobes present in mature plaque biofilm.

As the role of Prevotella intermedia have been well established in chronic periodontitis 5, 6 and the literature search revealed no data on the presence and influence of the Bat A and Bat B genes in P.intermedia, the present study was carried out as an attempt to investigate the presence of aerotolerance genes Bat A and Bat B in P. intermedia.

25 systemically healthy patients between 18 –35 years with different stages of periodontitis who attended the Department of Periodontics, SRM Dental College, Ramapuram, Chennai, India for various dental concerns were evaluated. Inclusion criteria for subjects with periodontitis were 20 or more natural teeth with 4 or more sites having ≥4mm probing pocket depth and clinical attachment loss. Subgingival plaque samples were collected from the deepest periodontal pockets of each subject with sterile curettes and immediately transferred to 1.5ml of reduced transport fluid for cultivation under anaerobic conditions within 4 hours of sampling.

Samples were vortexed for 2 minutes and split. 100µl each of the plaque sample was used for culture by digest buffer solution and PCR. 100 µl dilutions were placed on anaerobic blood agar plates (Hi-Media, India) supplemented with sheep blood (5% vol/vol), hemin (5 mg/liter), and menadione (1mg/liter) and incubated in 80% N2 –10% H2 –10% CO2 at 37°C for 7 to 14 days. Different colonies developed were isolated and subcultured under standard anaerobic conditions as mentioned above for 1 week. Prevotella intermedia was grown in Todd Hewitt Broth; supplemented with beef heart, peptic digest of animal tissue, dextrose, sodium chloride, disodium phosphate, sodium carbonate for pH = 7.8(+/- 0.2).

Extraction of total genomic DNA from plaque samples was performed based on the technique elaborated by Sambrook et al 1989. The pellet was washed in 70% ethanol, air-dried and resuspended in TE-buffer and stored at -20ºC for further use. The purity of DNA was determined by UV spectrophotometric analysis at 260nm-280nm and separated by agaraose gel electrophoresis. 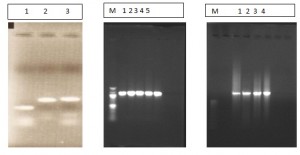 FIG.2: A) NUCLEOTIDE SEQUENCES OF THE BAT A GENE IN PREVOTELLA INTERMEDIA: 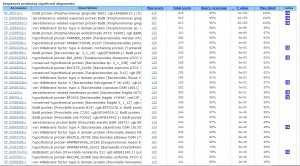 FIG.2: B) NUCLEOTIDE SEQUENCE OF THE BAT B GENE IN PREVOTELLA INTERMEDIA

Using the BLAST results, the highly similar sequences were grouped together and the family of proteins, to which the query protein belongs to, was determined using Clustal W. (Sequence data not included). Based on the dendrograms obtained from the Clustal W result, the family of the Bat A and Bat B genes were predicted and the related sequences were analysed. The relationship of the Bat A and Bat B genes with other species predicts the family, sub family and the function of the protein sequence that can be obtained from the gene 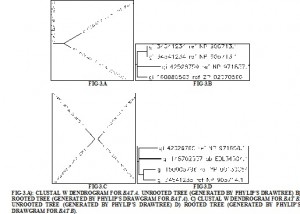 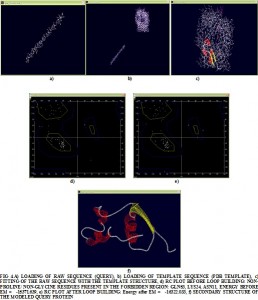 DISCUSSION: Amongst the obligate anaerobic periodontal pathogens that have been implicated in the initiation and progression of periodontal disease, Porphromonas gingivalis has been documented in detail. 5, 6 Although strictly anaerobic, P.gingivalis is able to survive in the presence of atmospheric oxygen. 30 The ability of anaerobes to survive oxidative stress is referred to as aerotolerance. 8

A variety of genes that are expressed during oxidative stress including those regulated by the Oxy R operon: sod, ahp C and ahp F; dps and usp A have been documented in the literature. 31, 32 With regard to the detail in which the afore-mentioned genes have been studied, few studies have documented the role of the Bat I operon. 18, 32, 33 Furthermore, in comparison to the extensive research performed on the aerotolerance mechanisms maintained by Porphromonas gingivalis, data pertaining to the regulation of oxidative stress control in Prevotella intermedia, another member of the Bacteroides species, appear to be limited. Extensive documentation has implicated Prevotella intermedia in the severity and progression of periodontal disease. 34 However, the mechanisms to overcome oxidative stress in these microrganisms are poorly understood.

This study was aimed at identifying the presence of the bacteroides aerotolerance genes Bat A and Bat B in Prevotella intermedia and evaluating the degree of homology between these genes if present with that of previously documented Bat A and Bat B genes of P.gingivalis. The Bat A and Bat B genes were chosen from among the Bat l operon as they were the most frequently identified genes in the literature.17, 18, 21 The present study identified the Bat A and Bat B genes responsible for the unlimited growth of Prevotella intermedia in aerobic conditions by adapting the standardized PCR protocol. The amplified products of PCR were sequenced by di-deoxynucleotide technique while the in silico study was carried out with the sequence obtained. Different bioinformatics tools were used to carry out the functional analysis of the gene.

The sequence was analysed using the BLAST X tool and the protein hits obtained were used for multiple sequence alignment to trace out the phylogenetic relationships between the sequences by CLUSTALW tool. The BLAST X results for the Bat A and Bat B query sequence had 152 and 127 protein sequence hits respectively when compared with various protein databases. The first 4 hits in both queries showed much similarity to the query sequence, and thus studied to identify phylogenetic relationships.

The results obtained from the in silico studies revealed that the Bat A and Bat B genes translated into the bat A and bat B protein respectively; where bat A was seen to be involved in transcription regulation and bat B in the immune response activity. The structure of the bat A was also predicted using a homology modelling technique with the beta sheet denoted in yellow and the alpha helix of the protein denoted in red. The above mentioned results therefore, demonstrate the existence of the Bat A and Bat B genes in Prevotella intermedia, thus contributing to its survival in conditions of oxidative stress as an inherent virulence factor.

CONCLUSION: From the results of the present study, it may be proposed that the identification of the Bat A and Bat B genes in Prevotella intermedia conferring protection solely or in combination with other aerotolerant mechanisms for this bacteria to survive within the periodontal pocket when exposed to varying amounts of oxygen and during the host inflammatory response. Future directions could incorporate the use of the hypothetical protein model obtained to developing a treatment strategy against periodontal disease by host modulation or recombinant therapy. However, further documentation is warranted on the role these genes play and their clinical significance.