Categories Menu
Home » IDENTIFICATION OF FUNGAL ENDOPHYTES FROM THE LEAVES OF CLEISOSTOMA TENUIFOLIUM: AN EPIPHYTIC ORCHID

IDENTIFICATION OF FUNGAL ENDOPHYTES FROM THE LEAVES OF CLEISOSTOMA TENUIFOLIUM: AN EPIPHYTIC ORCHID

IDENTIFICATION OF FUNGAL ENDOPHYTES FROM THE LEAVES OF CLEISOSTOMA TENUIFOLIUM: AN EPIPHYTIC ORCHID

ABSTRACT: Distinctive groups of fungi are involved in the symbiotic association with epiphytic orchid. We have isolated endophytic fungi from Cleisostoma tenuifolium epiphytic orchid found in the Western Ghats and used morphological criteria as well as molecular techniques to identify these fungi. Characterization of these fungi was done by analyzing the quantified genomic sequences, and then identification was done by comparing the ITS region sequence of obtained fungi with its closely related fungal species from the NCBI database.  Molecular techniques were useful in identifying endophytes to its species level. The vast range of endophytes from a single type of orchid further highlights the importance of forest epiphytes as reservoirs of fungal biodiversity; Schizophyllum commune, Stagonosporopsis cucurbitacearum, Xylaria adscendens, Fusarium proliferatum.

INTRODUCTION: Kodagu is situated in the Western Ghats of peninsular India and is a land of plenty and beauty. The biodiversity is generally agreed to indicate the variability of all living organisms and at all taxonomic level from species to ecosystem. Kodagu district in Karnataka (75025’-75014’E,12015’-12045’N) is located in the central part of the Western Ghats, comprises 50% forest and agroforestry area. Trees of Western Ghats harbor a variety of epiphytic orchids 1. Orchidaceae is one of the largest and most complex families of ﬂowering plants, comprising of approximately 22,500 species belong to 736 currently recognized genera 2.

Orchids are important aesthetically and medicinally and are economically important. Many orchid species are cultivated for ornamental purposes. Orchids are used as food, and many orchids are traditionally used as medicine in many parts of the world. However, their number is declining due to high demand, indiscriminate collection, and habitat destruction 3, 4, 5, 6, 7. Cleisostoma tenuifoliumis a miniature-sized, warm growing epiphytic orchid, which blooms in spring and summer with yellow colour inflorescence.

Endophytes are symptomless colonizers of internal plant tissues and cause no significant harm to their host, with few reports suggesting that they can even improve their host’s fitness 8. Fungal endophytes are fungi that live inside plant tissues causing no detriment to the host. It has only been recently that the fungal endophytes of the world’s tropical and subtropical flora have begun to be documented 9. In the past, fungal identification relied on morphological characteristics such as colony, mycelium, and spore characters 10. Recent advances using a combination of ecological, microbiological, and molecular techniques have begun to expose the complexities of specificity that does exist, while phylogenetic studies of both host and mycorrhizal fungus have also thrown light onto these in notoriously non-specific mycorrhizal associations 11, 12. Though extremely diverse, the plants of this family have mostly been screened for their mycorrhizal symbiosis 13, and studies on fungal endophyte communities are relatively few 14, 15. Our previous studies related to endophytes from orchids identified different endophytic fungi from orchids of western ghats Vanda testacea, and also Ctenuifolium. The aim of this study is to identify the endophytic fungi of leaves of Cleisostoma tenuifolium, an epiphytic orchid species from agro-forestry area of Kodagu

MATERIALS AND METHODS: Leaves were sampled from C. tenuifolium plants growing in trunks of the tree Spathoda campanulata. Leaves were washed in tap water before surface sterilization via immersion in 96% ethanol and flaming. Leaf sections were incubated on potato dextrose agar containing 15 mg/ml tetracycline and streptomycin for 3-4 weeks at 25 °C in the dark. Fungal isolates were sub-cultured to ensure purity and then processed. Sporulating fungi were identified on the basis of colony colour and spore morphology using Barnett and Hunter 16. We attempted to identify four non-sporulating isolates via PCR, cloning, and sequencing using the methods outlined in Sambrook and Russell 17. In brief, genomic DNA was extracted from pure cultures of the isolated fungi. ITS rDNA was amplified with forwarding ITS 1: TCC GTA GGT GAA CCT GCG G; Reverse ITS4: TCC TCC GCT TAT TGA TAT GC primers, and the Sequences were compared with fungal ITS sequences in GenBank using BLAST searches.

RESULTS: Samples of the plants were collected from the Somwarpet region (Latitude: 12° 35' 49.13" NLongitude: 75° 50' 58.45" E). A plant used for the studies was given in Fig. 1, and the leaf portion were shown in Fig. 2. When pure fungal cultures were isolated, those plates were appeared as in Fig. 3 and Fig. 4. On the basis of the mycelial colour, shape, and reproductive characters, tentative genus identification of isolated fungi was done. From the plate itself, it is clear that all the four fungi were entirely different from each other. 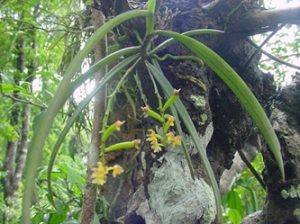 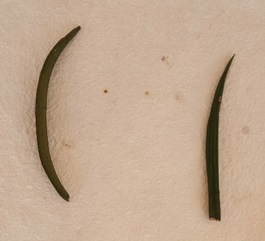 FIG. 3: APPEARANCE OF BL1 AND BL2 ON PURE CULTURE

DNA-ITS sequences were obtained for all of the four endophytic fungi. For convenience, the cultures were named as BL1, BL2, BL3, BL4. Table 1 documents the code for deposition of sequences to the GenBank, accession numbers, two most closely related strains of fungi with their percentage of similarity for all corresponding fungal isolates.

TABLE 1: REPRESENTING CLOSEST TWO MATCHES FROM BLAST SEARCHES OF ITS SEQUENCES AMPLIFIED FROM ENDOPHYTIC FUNGI ISOLATED FROM THE ORCHID. INCLUDED ARE THE SUBMISSION CODES, THE TWO CLOSEST GENBANK MATCHES AND ACCESSION CODES, SEQUENCE IDENTITY OF ALL THE FUNGI

DISCUSSION: Orchids with horticultural, ornamental, medical and commercial importance have been studied for the presence of endophytes 15, 18. Epiphytic orchids are highly valued as ornamental plants and play a vital role in rainforest ecosystems; they are extremely sensitive to disturbances and are threatened by habitat loss 19. The occurrence of local adaptation of the fungi to the orchids provides evidence that the interaction is not driving speciation. A similar interaction has been shown in other orchids where the underground mycorrhizal interactions are shared among closely related species. In the same species the pollinator specificity tends to differ among closely related species and this interaction drives the speciation process 20. The traditional method of fungal species identification using morphological characters is slowly replaced by molecular characterization 21. Molecular techniques were useful in identifying four non-sporulating deuteromycete fungi.

The wide variety of endophytes isolated further highlights the importance of rainforest plants as reservoirs of fungal biodiversity. Molecular techniques have previously been shown to be useful in identifying endophytic orchid fungi as they are objective and do not rely on fungal cultures forming sporulating structures 22, 23, 24, 25.

Guo et al., 26 highlights the value of using DNA sequence analysis in the identification of rainforest endophytes – in particular, non-sporulating fungal species. The molecular identification of a Phaeacremonium sp., a Penicillium sp. and a fungus with identity to Chaetomium / Paecilomyces demonstrates the usefulness of this approach to fully documenting the fungal endophytic community of D. speciosum.

Furthermore, some well-known virulent taxa, such as Fusarium species, which are often isolated fromorchids, tend to be asymptomatic endophytes rather than pathogens under optimal growth conditions 27, 28. Molecular techniques were useful in identifying fungal endophytes from roots of Dendrobium speciosum, a common epiphytic orchid in southern Queensland rainforests 29. Molecular techniques were used in few more studies in identifying fungi from orchids 30, 31, 13, 32.

Our previous studies discussed the diversity of endophytic fungi from orchid, V. testacea 33 and C. tenuifolium 34. In summary, we have identified the fungal endophytes inhabiting roots of the epiphytic orchid C. tenuifolium. Using both morphological and molecular approaches, we have documented a range of fungal species residing in the leaves of the orchid. Such a large variety of endophytes from a small plant sample size illustrates the importance of vulnerable plants as reservoirs of fungal biodiversity, and moreover, this is firsthand research in identifying endophytes from this epiphytic orchid from the Western Ghats to its genomic level. This study provides the impetus for further studies of the fungal endophytes in epiphytic orchid plants from the Western Ghats.

ACKNOWLEDGEMENT: We are grateful to Mangalore University for providing facilities for carrying out the work.