INTRODUCTION: Various signal transduction pathways remain involved in the regulation of cell growth. The most important reversible mechanism for triggering or inhibiting the activity of specific proteins in a signalling pathway is phosphorylation. A large and diverse family of enzymes, protein kinases play a critical role in eukaryotic signal transduction 1.

Protein substrates and protein kinases are toggled between active and inactive conformational states according to their state of phosphorylation 2 one of the simple and better-characterized members of the protein kinase family is cyclic adenosine monophosphate (cAMP) dependent protein kinase (PKA.) PKA exists as a heterotetramer in the inactive state, with a dimeric regulatory (R) subunit and two catalytic (C) subunits. Upon binding cAMP, the C subunits are released from the R subunits to interact with protein substrates. The catalytic core of the C subunit is conserved among family members and contains the basic features for binding ATP and protein substrate and for catalyzing phosphoryl transfer 3.

Conformational change is a common mechanism for kinases to orient a phosphoryl leaving group and to eliminate water from the active site 4. Defective regulation of PKA holoenzyme activity is directly related to the progression of cancers 5. Experimental studies revealed that over expression of cAMP dependent protein kinase catalytic subunit (PKACA) causes severe tumorgenesis in prostate and other cancers 6, 7. Prostate cancer is the most commonly occurring form of cancer in western men, and the second leading cause of death due to cancer 8. Prostate cancer therapies which are used these days have lots of side effects on human health. Natural compounds can be used as effective molecules in prostate cancer therapy to avoid the side effect.

Therefore, PKACA is being used as a drug target for various cancers. Few inhibitors of PKACA are under clinical trials. As drug discovery process is very expensive and time consuming process, in silico studies provide a cost effective platform for discovery of effective molecules. The present study was carried out to the discover the natural compounds for PKACA inhibition using high throughput virtual screening and molecular dynamics simulations technique.

In order to avoid excessive runtimes for high throughput virtual screening (HTVS) against entire database, prepared compounds were filtered on the basis of their drug-likeness properties, in terms of  pharmacokinetic properties and, in terms of reactive functional groups to screen out unwanted compounds. Filtered database was subjected for the stepwise HTVS, followed by standard precision (SP) and extra precision (XP) docking using Glide. Prior to the HTVS, receptor grid was generated using Glide 6.8 module 15.

The prepared 3D structure of the target protein was used to generate the glide scoring grid for the successive docking calculations. Pharmacokinetic, ADME (absorption, distribution, metabolism and excretion) properties were calculated using Qikprop 4.5 module 16. In general, the ADME descriptors are calculated at the last stage of the drug discovery process, but in the present study, the ADME properties calculations were performed in the preliminary stage to save the time as well as to curtail the cost involved in the process.

Molecular dynamics simulation: MD simulations were performed to obtain the most stable conformation of PKACA and ligand complex. Prior to MD simulation, XP docked complexes were prepared by protein preparation wizard in the same manner as prepared earlier for the virtual screening. Desmond 3.1 MD package was employed for MD simulations using OPLS-AA (All-Atom) force field parameters 19. To immerse the prepared complex a truncated orthorhombic box of SPC water molecules was used, and the space between the peptide atoms and the boundary of the water box was not less than 10.0 Å. System was neutralized by adding Na+ ions.

Before the simulation, system was optimized in 2000 steps with constraints on heavy atoms in the system; this was followed by 2000 steps of full minimization without any constraints to remove bad contacts. Electrostatic interactions were calculated using Particle Mesh Ewald method, with a 10 Å cutoff in real space. Finally, 100 ns MD simulation in the isothermal-isobaric ensemble (the number of particles, the pressure, and temperature [NPT]) was carried out to adjust the pressure of the system. Nose- Hover chain thermostat and Martyna-Tobias-Klein barostat were used to maintain the system. A Langevin thermostat, with a collision frequency of 1.0 ps-1 was used to sustain the temperature at 300 K. The pressure was maintained at 1 atm using isotropic pressure coupling, with a relaxation time of 2 ps. MD simulation used a time step of 2 fs, and all covalent bonds involving hydrogen atoms were constrained with the SHAKE algorithm 20-22. The coordinates of trajectories were saved every 10 ps during MD simulations.

High throughput virtual screening: The structure-based virtual screening is highly accepted for the identification of novel compounds. In this study, HTVS protocol was applied on zinc compounds to identify the PKACA inhibitors. Molecular possessing of useless compounds and generation of false-positives was avoided by calculating the pharmacokinetic properties. OPLS-2005 force field was applied to optimize the compounds. In addition, Lipinski rule of five was calculated applying cut-off range of the removal of the outliers 23. After the filtration with defined criteria the prepared zinc database was compressed to 164530 compounds, which were then subjected to a stepwise HTVS protocol, followed by SP and XP docking to calculate the Glide score and Glide energy 24. Fig. 1 illustrates the 2D conformation of the ligands with the top-ten highest scores obtained after XP docking. The docking studies indicated that all top-ten hit compounds binds with the best efficacy with active site of receptor. MM/GBSA score analysis was performed to determine the binding efficiency using the pose viewer file of the protein-ligand complex generated from XP docking. 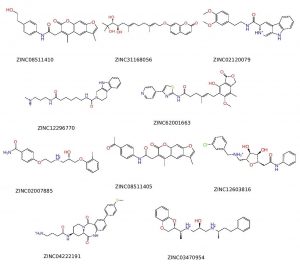 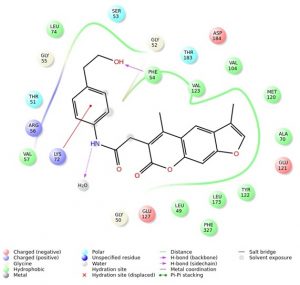 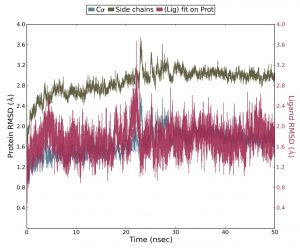 Trajectories analysis revealed that zinc0B134104 system was stable and well within the binding pocket of cAMP dependent protein kinase catalytic subunit. Lower root mean-square fluctuation (RMSF) values were depicted by the residues of the active site and alpha helix regions, suggested the stability of the regions (Fig. 4).  The energy of the system was relatively consistent during 50 ns MD simulations run. 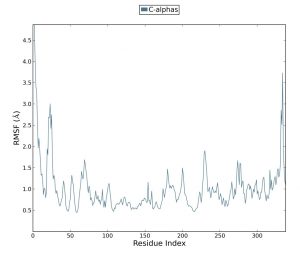 Post-processing interaction was done to examine the ligand-protein binding interactions by implementing the trajectory frames generated from the MD simulation. The system stability was maintained mainly due to the hydrogen bond interaction with the Phe 54, and hydrophobic interactions of Val 57, Ala 70, Lys 72, Leu 173 and Phe 327 (Fig. 5). 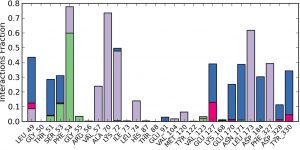 Leu 49,Gly 127, Glu 170, Asn 171 and Asp 184 were engaged in the formation of water bridges to maintain the stability of the system which shows that this complex is more stable in physiological conditions. Analysis of RMSD, RMSF and hydrogen bonding interactions of docking complex were depicted the steady nature of the lead compound.

Finally, the results of molecular docking and MD simulations proved that zinc0B511410 was having better binding orientations, RMSD, RMSF, potential energy and follow good pharmacokinetic properties. Therefore this lead compound can be considered for further studies against prostate cancer.

CONCLUSION: PKACA is a potential target for drug discovery. Molecular docking can act as a potential step towards the development of new therapy against prostate cancer. Novel inhibitors were identified by in silico screening of biogenic compounds from the zinc database using high throughput virtual screening. The selected compound zinc0B511410 was further validated by MD simulations. Finally, the results of molecular docking and MD simulations proved that zinc0B511410 was having better binding orientations, RMSD, RMSF, potential energy and follow good pharmacokinetic properties. Therefore this lead compound can be considered for further studies against prostate cancer.

ACKNOWLEDGEMENTS: Authors have acknowledge Amity Institute of Biotechnology, Noida for providing the facility for current study.