INTRODUCTION: The family Solanaceae comprises 84 genera and 3000 species distributed in tropical and temperate regions of both hemispheres but chiefly in western and southern America.

It includes herbs, shrubs, often creeping or climbing.  The members of Withania genera play an important role in the indigenous medicine of South East Asia, e.g. in the Unani and Ayurvedic systems.

The sixty six known Withania species are widely distributed in the drier parts of tropical and subtropical zones, ranging from the Canary Islands, the Mediterranean region and northern Africa to Southwest Asia 1, 2.

Among them, only two species, W. somnifera and W. coagulans, are economically and medicinally significant, being used and cultivated in several regions 3.

The chemistry of Withania species has been extensively studied and several groups of chemical constituents such as steroidal lactones, alkaloids, flavonoids, tannin etc. have been identified, extracted, and isolated 4, 5.

At present, more than 12 alkaloids, 40 withanolides, and several sitoindosides (a withanolide containing a glucose molecule at carbon 27) have been isolated and reported from aerial parts, roots and berries of Withania species. W. somnifera is the species of its genus with a wider geographical distribution and sometime known as Indian ginseng and winter cherry.  It is a highly reputed plant of Ayurvedic system of medicines over 3000 years and is a predominant constituent of over 200 medicinal formulations 6, 7.

W. coagulans, common in Iran, Pakistan, Afghanistan and East India, is also used in folk medicine. Fruits of the plant have a milk-coagulating property attributed to the pulp and husk of the berry, which has been used in the preparation of vegetable rennet ferment for cheese 8.

Extensive field survey and critical perusal of literature revealed the presence of additional diploid species W. obtusifolia in the natural population has been reported by 9, but most of the morphological and anatomical features of these two plants were similar 10.  Due to the morphological similarities between W. somnifera and W. obtusifolia, these two species are frequently erroneous identified. It has been estimated that between 60 and 80% of people worldwide rely mainly on traditional herbal medicine to meet their primary healthcare needs and the increasing potential pharmacological application of W. somnifera alarmed us the importance and urgency of studying inter species genetic variability between these morphologically similar species of Withania, which helps to identify the right species for the medicinal purposes.

Genetic studies are the fundamental to study inter and intra species genetic variability and also it helps in the management and conservation of the species of important. The use of molecular marker is the powerful and handy tool in the genetic variability studies; RAPD (Random Amplified Polymorphic DNA) is the simple and suitable technique for the analysis of genetic variability.

Plant collection: We have collected seeds and leaf material from several populations of same ecological region i.e. Tiruchirappalli district of Tamil Nadu. The collected samples were labeled with two capital letters as WS and WO for the W. somnifera and W. obtusifolia respectively.  The numerical number were given followed by two letters to denote the location at which sample was collected i.e. WS1.

DNA sample preparation: Genomic DNA was isolated from the young leaves of individual plants by the standard CTAB method. Quantification of DNA was performed both spectrophotometrically and electrophoretically using Lambda DNA digested with Hind III as a standard marker.

According to 8 the intraspecific variations and polymorphism are usual phenomena in Solanaceae, when facts are like this; studying the interspecific variation of two morphologically similar species (Fig. 1) using the RAPD markers is a tough and challenging task. 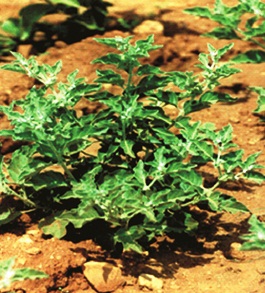 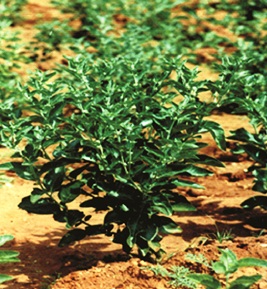 Only 15 primers were selected to use in this study, because wide range of available RAPD primers have been used to study the intra species population variability in W. somnifera. Recently 14 have reported the considerable genetic variations among the 15 wild accessions of Tamil Nadu using RAPD markers (OPA 03, 06, 12 and 16). We cannot use those primers, which are suitable to study the intra species population variability, therefore, the first priority were given for choosing the RAPD primers, which have been resulted the monomorphic bands among the reported intra species variant (fig. 2).

A through literature perusal and our earlier works on studying intra species variation in W. somnifera helped to select 15 primers for this study.  All the WS marked samples (WS1, 2, 3, 4 and 5) irrespective of their location have been used to test the ability and reproducibility of producing monomorphic bands with the selected primers. 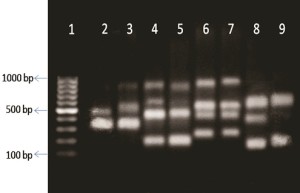 The same experiment was also conducted separately in W. obutsifolia marked samples (WO 1, 2, 3, 4 and 5), surprisingly 7 primers out of 15 primers failed to give any amplification in W. obtusifiolia and 4 primers remained out 8 produced polymorphic bands among the W. obtusifolia samples. These results showed that there is most important evidence for genetic variation between these two species.  Remaining 4 primers were tested for the polymorphic bands between the W. somnifera and W. obtusifolia.  All the 4 primers produced totally 52 bands among this 34 bands were polymorphic for these tested samples (fig 2). The outcome of the study is essential for eliminating the problems related to the identification of the species and can be exploited for their correct utilization by pharmaceutical industries.

Conclusion: Protein profiling of leaf and seeds revealed that there was a unique marker protein with a molecular weight of 20 Kda present in W. somnifera. RAPD analysis revealed that all the 4 primers was produced totally 52 bands are among this 34 bands were polymorphic.

The RAPD analysis of W. obtusifolia and W. somnifera encouraged us to think positively that there were most considerable genetic variations between these two species.

Acknowledgement: The authors are thankful to the Mr. R. Ramganesh, MBA, for offering computer facilities and financial assistance for completion of this work.