ABSTRACT: Understanding the mode of inhibition through the crystal structures of EGFR kinase domain complex with small molecule inhibitors provides us to search for potential ligands of EGFR. The binding mode analysis of pyridopyrimidine analog reveals that the presence of hydrogen bonds between the target protein amino acid Met 793 (i.e. the hinge region which is responsible for catalytic activity of the domain) and the ring nitrogen of the small molecule inhibitor. In addition, amino acid Asp 855 and Lys 745 were also involved in the interaction. The present work focuses on the identification of novel ligands through computational approach. By screening of pubchem database compounds, based on the bioactive and structural similarity of a pyridopyrimidine derivative (highly potent inhibitor of EGFR), 117 compounds were identified and all are having kinase inhibition activity but were not analyzed in EGFR. Using GLIDE software, the docking was done and complete analysis of the binding mode results in eleven compounds having same pattern of interactions and these compounds may be further analyzed by in vitro for their EGFR kinase inhibition activity.

Hence, developing small molecular compounds to inhibit EGFR is considered as an important therapeutic approach for treating a variety of cancers 7, 8, 9. To achieve this goal small molecule inhibitors which compete with either the ligand binding domain or ATP binding pocket of the cytoplasmic tyrosine kinase domain have been approved as anticancer drugs 10.

Specifically, a number of quinazolin based small molecules such as Gefitinib & Erlotinib were approved for treating Non Small Cell Lung Cancers (NSCLC) 11, 12 and they competitively inhibit with the ATP binding pocket leads to downstream signaling of EGFR 13, 14. With similar mechanism of action other quinazolin derivatives namely, Vandetanib and Lapatinib (dual inhibitor of EGFR and HER2 tyrosine kinases) were developed for treating medullary thyroid & metastatic breast cancers 15, 16, 17.

Similarly, analyzing the structure of EGFR – Gefitinib complex (PDB ID: 2ITO), it is observed that the ring nitrogen N1 forms hydrogen bond with Met 793, the residue of hinge region which connects the N and C lobes. The ligand molecule is surrounded by the side chains of Lys 745, Leu 788 and Thr 790 19.

Though the therapeutic effect of quinazoline based molecules on different cancers have been well established, many side effects like diarrhea, skin rashes, nausea, vomiting and haemorrhage were also reported 20. Search for alternative therapeutics with less toxicity is essential to overcome these side effects of quinazoline analogs. Analogs of pyridopyrimidine, pyrollopyrimidine and pyrollotriazine are experimentally studied and proved as anti cancer agents and these competitively bind to the ATP binding pocket of EGFR 21, 22, 23, 24.  For example, analysis of the binding mode of dual inhibitor N-{2-[4-({3-chloro-4-[3-(trifluoromethyl) phenoxy] phenyl} amino)-5H-pyrrolo [3, 2-d] pyrimidin-5-yl] ethyl}-3- hydroxy-3-methylbutanamide (tak-285) with EGFR in the crystal structure (PDBID: 3POZ) enlightens the important residues for interactions.

All kinases possess a bilobed folding i.e. N- terminal and C – terminal in which the N-terminal lobe consists of mostly strands and one helix and the later consists of majority of helix. These two lobes are interconnected by a hinge region and are divided by an inwards cleft which comprises ATP binding site. The size of the ATP binding pocket is based on the spatial accommodation of the two lobes which are in turn represented by the activation state of the domain. The residues associated with catalytic activity of EGFR kinase domain includes the nucleotide phosphate binding loop consisting of Leu718–Val726, alpha helical region of N- terminal lobe (Asn 756 – Val 768), DFG motif (Asp 855–Gly 857), catalytic motif (Arg 836–Asn 842), and activation loop in the C- terminal lobe (Asp 855–Val 876). The dual inhibitor tak - 285 binds with the ATP binding pocket of EGFR in competition with ATP. The inhibition is through the direct hydrogen bond formation between the pyrimidine ring nitrogen and Met 793 found in the hinge region of N and C lobes; a water mediated hydrogen bond is also formed with the other ring nitrogen to Thr 854.

Further, a pocket comprising of Cys 775, Met 766, Leu 777, Leu 788, Thr 790, Thr 854 and Phe 856 provides space for accommodation of bulky moiety of the ligand 21. All these structural information and use of virtual screening and docking studies provide a novel as well as target specific active ligand molecules. Adopting computational or insilico approach of virtual screening process provides list of suitable chemical candidates as EGFR inhibitors and docking studies are used to understand the interaction pattern of the receptor with its inhibitors 25. For example Cavasotto, et al., (2006) identified 39 novel ligands as anti EGFR through virtual screening and docking studies and they experimentally discovered that the compound C (4)-N (1)-substituted pyrazolo [3, 4-d] pyrimidine [MSK-039] inhibits EGFR tyrosine kinase activity with low-micro molar concentration 26. Similarly, Yang, et al., (2011) employed virtual screening against Traditional Chinese Medicine Database (TCM Database Taiwan). Four compounds namely 2-O-caffeoyl tartaric acid, Emitine, Rosmaricine, and 2-Oferuloyl tartaric acid, were identified as potential inhibitors of EGFR with better binding affinity. Further, through docking analysis, they explained that the interactions are mediated through the formation of hydrogen bond between ligand molecule with either Asp 855 or Lys 716 / 728 of the target protein. The stability of these interactions is further analyzed by molecular dynamic simulation studies 27. Another structure based virtual screening and docking study carried out by Li, et al., (2012) identified 13 novel compounds from 1, 97, 116 in SPECS database.

Among these 13 compounds 8 compounds were experimentally proved as anti EGFR 28. In continuation of all these success processes, in this work, we tried and identified novel ligands by applying both structure and ligand based virtual screening and docking analysis to have a look in to search for potential inhibitors of EGFR. Finally, eleven compounds were identified and which form hydrogen bonds, pi –pi, pi – cation & hydrophobic interactions with catalytically important active site residues such as Met 793, Asp 855 & Phe 856 of EGFR. Results from the analysis of binding models and drug like properties point to the likelihood of these compounds as effective EGFR inhibitor candidates.

Selection, Screening and Preparation of ligands: Highly potent pyridopydimidine analog (Binding DB ID: BDBM 3081, Pubchem CID: 5327895) was identified from Binding DB 31. Based on the structure and bioactive similarity, 117 compounds were retrieved from Pubchem database (http: //www. pubchem.ncbi.nlm.nih.gov/). The dataset consists of pyridopyrimidine, pteridine, naphthyridine, and benzotriazine derivatives. Experimental results of all these compounds show inhibitory activity against various protein kinases but not with definite quantity on EGFR tyrosine kinase. Hence, these compounds were selected for analyzing potential EGFR kinase inhibition activity. All these compounds were prepared by means of optimizing bond angles, bond lengths and their protonation state, etc., using Ligprep module from maestro 32. The Pubchem CIDs and their inhibition activity details are given in Table 1.

RESULT AND DISCUSSION: The best docking pose of the highly potent compound 6 – (2, 6 – dichlorophenyl) – 2- (3 – methoxyanilino) – 8 –methyl pyrido [2, 3 –d] pyrimidine – 7- one (Pubchem CID: 5327895) is shown in Fig 1. It is noted that the bulky side chain of the ligand molecule is surrounded with many hydrophobic residues and thus produces hydrophobic interactions between the ligand and target protein. This compound binds to the target protein with a docking score of -12.42 Kcal/mol. The interaction mode of this compound reveals that, inhibition activity against EGFR is through a combination of hydrogen bonds as well as hydrophobic interactions with the residues located around the catalytic active site. In this, three hydrogen bonds were formed such as oxygen attached with pyridopyrimidine moiety and the ATP binding pocket hinge region hydrophobic residue Met (793), NH group of methoxy aniline with DFG motif residue Asp (855) and ring nitrogen with Lys (745). 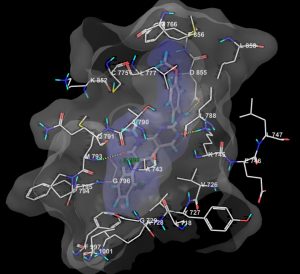 Thorough analysis of the interaction mode, docking scores and the drug like properties of all the 117 compounds were carried out. Results from this analysis reveal that, some compounds did not produce reasonable docking poses as well as not interacting with important active site residues such as Met 793, Asp 855 and Lys 745 and were eliminated. Finally, eleven compounds consist of seven pyridopyrimidine, three napthyridine and one pteridine derivatives were predicted as potential inhibitors of EGFR. The Pubchem CID, structure, IUPAC name, and docking scores for all these selected ligands are given in Table 2.

Analyzing the docking models, it is noticed that the pyridopyrimidine derivatives 44390969 and 44390951 forms direct hydrogen bond with hinge region hydrophobic residue of Met 793 through the amino and hydroxyl group respectively. In addition with this interaction, they also forms pi – pi interaction through the aromatic ring with Phe 856 of DFG motif residue (Fig. 2A, B). 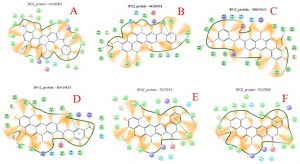 Analysis of drug like profile of these compounds reveals that the molecular weight, donors, acceptors and octanol / water partition coefficient (solubility) are within the acceptable ranges. Similarly, the absorption properties for all the compounds are 100%. Further, the results show that the compounds have very low Blood Brain Barrier permeability property (Table 4).

CONCLUSION: Targeting the inhibition of misregulated Epidermal Growth factor Receptor (EGFR) is considered to be an important task in anticancer research. Several drugs targeting both extracellular ad intracellular regions are under clinical development. Especially, developing molecules for oral chemotherapy is a challenging task for clinicians. The structural studies on the mechanism of inhibition of this receptor by small molecule inhibitor provide molecular determinants for the improved and specific inhibition activity of new anticancer drugs.  The insights obtained from this study reveal that the hydrophobic residues Met 793, Thr 854, negatively charged residue Asp 855 and Phe 856 play an important role in the inhibition activity of EGFR. With this knowledge, we identified eleven inhibitors of EGFR by virtual screening and docking analysis. All the selected eleven compounds bind with the important target catalytic active site residues Met 793, Asp 855, Phe 856 and Thr 854. The bioactivity profiles of these compounds are also analyzed which reveal that the compounds are having good drug like profile. Hence these compounds may be used as lead compounds to design novel EGFR inhibitors.