ABSTRACT: Tannin acyl hydrolase, commonly referred to as tannase (E.C. 3.1.1.20), an inducible extra-cellular enzyme produced by a number of animals, plants and microbes. In this investigation, tannase production under solid-state fermentation by using Aspergillus niger and the waste residue of cashew husk was used as substrate for obtaining the desired fermented product. After termination of fermentation gallic acid was isolated from the tannase, and it was used in the production of an antibacterial drug Trimethoprim by using chemical and bioconversions. Microbial tannase is more stable than tannase from other sources like plants or animals. Tannase from fungal sources are reported to be active in a wide range of pH and temperature. Aspergillus niger was used in this study for the immobilization of tannase enzyme. Tannase production was reached maximum within 24 to 36 h against crude tannin extract obtained from Anacardium occidentale by using Aspergillus niger. Tannase assay was calculated. Activation energy of the immobilized enzyme was lower than that of the free enzyme. Optimum pH and temperature was evaluated for the free and immobilized enzyme.

INTRODUCTION: Tannase (tannin-acyl-hydrolase, E.C. 3.1.1.20) catalyzes the hydrolysis of ester and depside bonds in hydrolysable tannins, as tannic acid, releasing glucose and gallic acid. Bacteria 6, yeast 2 and filamentous fungi 3, 5, 11 are known tannase producers. Species of Aspergilli were reported as the best tannase producers in submerged and solid state fermentations 4. The major contribution to gallotannin fermentation was that of Knudson 10, he demonstrated the toxic nature of tannic acid to most of the fungi at low concentration except various species of Aspergillus and Penicillium.

Production of tannins by using suitable tannase producing microorganisms was preferred today. Present work describes the immobilization of Aspergillus niger tannase and optimum conditions of the parameters pH and temperature of immobilized tannase.

Screening and culture conditions: A strain Aspergillus niger was obtained from NCIM Pune, India. For maintenance of A. niger, Potato dextrose agar (PDA) slants were used with 28ºC for six days of incubation period. The slants were sub cultured routinely once every three weeks 14.

Tannase assay: Tannase activity was determined by the method of Mondal and Pati 12. Enzyme solution (0.1 ml) was incubated with 0.3 ml of 1.0% (w/v) tannic acid,  in 0.2 M citrate buffer (pH 5.0) at 40°C for thirty minutes and then the reaction was terminated at 0°C by the addition of   2ml BSA (1 mg/ml), which precipitates the remaining tannic acid. A control reaction was also done side by side with heat denatured enzyme.

The tubes were then centrifuged (5,000 x g, 10min) and the precipitate was dissolved in 2ml of SDS- triethanolamine (1% w/v, SDS in 5% v/v, triethanolamine) solution and the absorbency was measured at 550 nm after addition of 1ml of FeCl3 (0.13 M).  One unit of the tannase was defined as the amount of enzyme, which is able to hydrolyze 1μ mole of ester linkage of tannic acid in one minute at specific condition. Activity calculated by using the following formulae 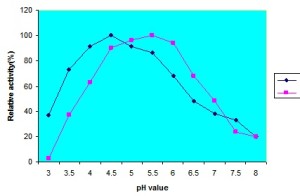 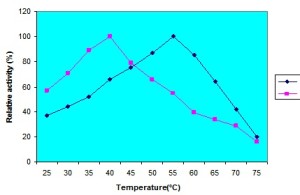