ABSTRACT: Introduction: Oral carcinoma is amongst the leading malignancies worldwide, with squamous cell carcinoma (SCC) as the most common type accounting for over 90% of cases. In OSCC, MMPs, (MMP9) which belongs to gelatinase group, promote tumor progression by new blood vessel formation, disturbing tissue morphology which allows tumor growth breaks the basement membrane and enables metastasis and it's overexpression in OSCC have prognostic value. Aims and Objectives: To evaluate the expression of MMP 9 in different grades of OSCC. Material and Methods: In this prospective study, a total number of 30 blocks specimens; 10 of each well, moderately, poorly differentiated were stained with MMP9 antibodies and compared with normal oral mucosa. All the data were documented and analyzed with SPSS 20 version software. Results: Normal 10 tissues with a mean age of 31.30 years and 30 OSCC patients of 51.93 years mean age were studied. In OSCC, 18 male (60%) and 12 female (40%) were participated. Among them, 8% smoking, 15% chewing and 7% both habits were revealed. With the X2 test, it was revealed that MMP9 in different grades of OSCC was found statistically significant. (P<0.05) in accordance with increasing order of dysplasia. Conclusion: Evaluation of MMP9 expression could be a prognostic marker in OSCC and can be used for cancer biotherapeutics. Which may improve the treatment protocol and prognosis of the patient.

INTRODUCTION: Oral squamous cell carcinoma (OSSC) is one of the most common malignancies, and it is observed over 90% of cases 1, 2. In recent advances, tumor microenvironment (TME) had been accepted for the treatment of cancer.

The tumor cells contain both cancer cell and surrounding microenvironment which is considered as TME 3. Various types of cells like  CAF, smooth muscle cells, endothelial cells, neutrophils, lymphocytes, and macrophages consists of the tumor microenvironment.

MMPs (matrix metalloproteinase) is one of the main enzymes which are calcium-dependent and zinc containing endopeptidases. These factors modulate cell behavior and enhance cancer progression by regulating angiogenesis, migration, proliferation, and invasion.

They are responsible for tissue remodeling, degradation of ECM, which includes type IV collagen, gelatine, fibronectin important part of the basement membrane 4. Till now 24 MMPs are identified, out of which 23 are found in humans. In OSCC, MMPs, especially MMP9 which belongs to gelatinase group, promote tumor progression by new blood vessel formation, disturbing tissue morphology that allows tumor growth which breaks the basement membrane and enables metastasis and its overexpression in OSCC  have prognostic value 5. Therefore, through this study, we attempt to understand the importance of MMP9 in the tumor microenvironment further. By correlating it with clinicopathologic parameters and evaluating its expression in different grades of OSCC.

METHODOLOGY: The present study was done in the Department of Oral & Maxillofacial Pathology & Microbiology, SOA Deemed to be University. The Institutional Ethical Committee of “Siksha O Anusandhan University” has approved to carry out this dissertation work (IMS SH/IEC/2013/193/8). The detail information on each case including age, sex, was collected from departmental archives. The study includes patient of all age group with histo-pathological diagnosed primary carcinoma case.

Patients are having carcinoma with any secondary infections and immunocompromised diseases, secondarily the tumors which are under treatment of chemotherapy or radiotherapy were excluded from the study. 30 blocks of various histopathological grades i.e. 10 well differentiated, 10 moderately differentiated, 10 poorly differentiated and 10 normal tissue blocks were taken as control group. Immunohistochemistry was used for the study to evaluate different grades of OSCC using IHC marker MMP9. Immuno-histochemical staining was performed on formalin fixed paraffin-embedded biopsy specimens that were obtained in the pre-treatment period and preserved in the departmental archives Fig. 1a-f. Identical sections were taken on a slide coated with 3-aminopropyl triethoxy silane (Sigma-Aldrich Co., St. Louis, MO, USA), deparaffinized, hydrated through descending grades of alcohol and placed in the tris-EDTA buffer (pH of 9.0) for 5 min in the microwave to retrieve antigenicity 8. Endogenous peroxidize activity and the non-specific antigen binding sites were blocked using 3% hydrogen peroxide and protein block for 5 min each.

Subsequently, the sections were incubated with primary antibody MMP9 (mouse monoclonal anti-MMP9, clone 15W2, Biogenex, diluted at 1:80) at 37 °C for 1 h in a moist chamber. They were incubated with a post-primary block followed by NovoLink polymer anti-mouse IgG-poly-HRP (8 lg/mL) at room temperature for 30 min each in a moist chamber. The sections were thoroughly rinsed with tris-buffered saline after every step. The reaction was visualized using DAB chromogen, counterstained with Mayer’s hematoxylin and mounted.

Intensity staining   for MMP 9 was divided into 3 criteria: 4, 6

Cell population was considered as:

Counting Method: We evaluated the slides histo-pathologically by our both inter/intraobserver and selected the high-density area of infiltration of MMP9 cells in the histopathological section.

RESULTS: A total number of 40 populations were studied using SPSS for analysis. Among them 10 cases from the normal population and 30 cases from OSCC. The mean age from the normal population was 31.30 years whereas in OSCC it was 51.93 years were described in Table 1. In the present study gender-wise distribution of patients in the OSCC group was done whereas in male 60% and females 40% their standard deviation is 51.93 ± 9.519 described in Table 2. Habit wise distribution in OSCC group was done taking two types of habit smoking and chewing, whereas in smoking 26.7% and chewing 76.7% seen in Table 3. 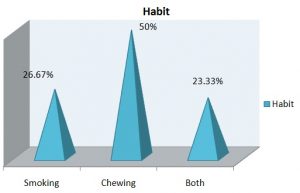 FIG. 2: SHOWS MAXIMUM NUMBER OF CASES 50% HAD LESION about HABIT

Using Chi-square test comparison of expression of MMP9 between normal and OSSC was done and it was found 7 cases are negative in OSCC, 23 cases are positive and their P-value is 0.001 which is statistically significant as described in Table 4.

TABLE 4: COMPARISON OF EXPRESSION OF MMP 9 BETWEEN NORMAL AND OSCC GROUP (POSITIVE AND NEGATIVE CASES)

TABLE 6: COMPARISON OF MMP9 WITH DIFFERENT GRADES OF OSCC AND NORMAL 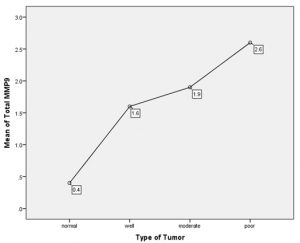 FIG. 3: COMPARISION OF MMP 9 WITH DIFFERENT GRADES OF OSCC & NORMAL

DISCUSSION: Squamous cell carcinoma (SCC) is an emerging problem in the world, due to its extremely high prevalence (90%) among oral cancers 1, 7. The high rate of relapse in OSCC indicates the inadequacy of current prognostic predictors in predicting metastatic potential. There are various proteolytic enzymes like MMP2, MMP9, MMP12, MMP14 which has a significant role in determining the prognosis of head and neck cancers 8. In this study, we have observed the infiltration of MMP9 in different grades of OSCC. Oral squamous cell carcinoma occurs at any intraoral site and generally involve tobacco user in the middle age group. Higher incidence of OSCC seen frequently in females 9, 10, 11. In our study we found 80% of OSCC cases below 60 yrs of age, 60% were males, and 40% were females; majority cases (53.33%) had a lesion in the buccal mucosa, and MMP9 infiltration was not significantly associated with a different form of tobacco habit pattern. According to Training Dai et al., MMP9 expression amongst men and women was markedly different, which indicates a high potential for OSCC metastasis in males. Our findings were in concordance with the studies done by Aparna et al., 7, Elahi et al., 9. But de Vicente et al., 12, Yorioka et al., 13 and Sutinen et al., 14 found a significant correlation with the patient’s age, gender, the habit of MMP9 expression.

MMP9 showed over-expression in various malignant tumors of breast, prostate, liver, lung, and bladder with a poor prognosis 16, 17. There are very few studies in oral cancers.  Our study results were concordance with the studies done by Yao YL et al., 18 and confirmed that relation of MMP9 expression. Therefore, it can be assumed that extensive presence of MMP9 cause breakdown of the basement membrane of the tissue which causes invasion and metastasis of  OSSC, which resulted in high metastatic rate and poor prognosis Also There are many other methods (ELISA, PCR) for MMP9 expression which are more specific 19, 20. IHC has been used to avoid false positive results though it is technique sensitive. Thus, further studies should be done with a larger sample size along with the use of another specific method to confirm the expression MMP9 in OSCC cases, and their expression should be correlated with the IHC technique.

CONCLUSION: In recent years many studies have suggested the role of MMP9 expression in oral cancer. In our research we have found that MMP9 expression increases from well to poorly differentiated squamous cell carcinoma which concludes that MMP9 plays an essential key role in different histological grades of OSCC. It plays an essential role in the process of invasion and metastasis in OSCC and upregulates the expression of MMP9.

Future Prospective: Evaluation of MMP9 expression could be a prognostic marker in OSCC and can be used for future cancer biotherapeutics. These findings will improve the treatment protocol and prognosis of the patients in the future.